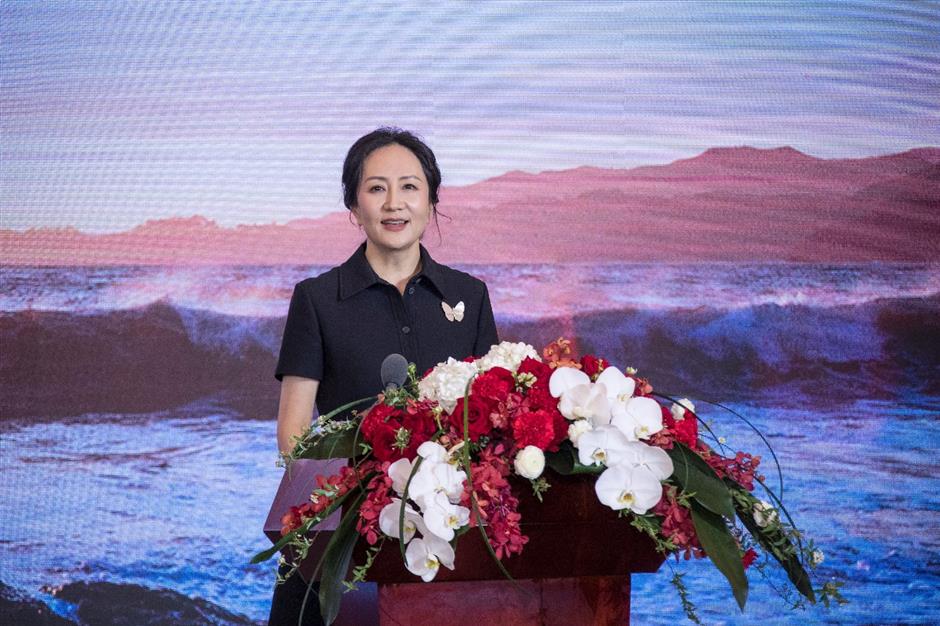 Meng Wanzhou speaks at the Huawei conference on Monday in her first public appearance since returning to China in September.

The company's chief financial officer Meng Wanzhou, who was detained in Canada for almost three years, spoke at the Huawei conference, her first public appearance since returning to China in September last year.

Huawei said it will increase research and development investment significantly, including recruiting 10,000 new employees this year.

Huawei is passing "the darkest zone," Meng said, adding that "we have become more united."

Despite a revenue slump in 2021, Huawei's ability to make profit and generate cash flow is increasing, making it more capable of dealing with uncertainty, she added.

But Huawei admitted it is facing challenges due to the COVID-19 outbreak and US tech sanctions, which have impacted its consumer business for smartphones, tablets and other devices.

The sanctions have made it difficult for Huawei to obtain chips and key components it requires for some businesses.

Instead, Huawei has invested more in other sectors like cloud and software as well as emerging sectors like autonomous driving. It has also developed its own operating system HarmonyOS.

Huawei Technologies released its annual results at a conference on Monday.

Talent, scientific research and innovation spirit are three key sectors that Huawei will depend on to survive and "reshape the ICT (information, communication and technology) industry," Guo added.

In the past five years, Huawei has a had huge lead over other Chinese firms in terms of invention patents granted. It is followed by OPPO, BOE, State Grid and TSMC, according to PatSnap, a third-party patent consulting firm.

Huawei has been leading all Chinese firms for patents over the past five years.

Huawei's total R&D expenditure over the past decade totaled more than 845 billion yuan, the company revealed.

Meng, born in 1972, was arbitrarily detained by Canadian authorities at Vancouver International Airport on December 1, 2018, in response to a US extradition request.

Facts have proven that the targeting of Meng was a case of political persecution aiming to suppress Chinese high-tech companies.

After being detained in Canada for 34 months, she returned to China in September. Millions of Chinese netizens welcomed Meng's return, as crowds greeted her at Shenzhen airport, according to media reports.

Monday was her first public appearance since retaking the CFO's role at Huawei.

During the conference, Meng quoted a Chinese proverb to describe her feeling: "One day in the middle of the cave, thousands of years in the world" (洞中方一日,世上已千年)

"I am trying to catch up with the rapid change and development," she told the conference.