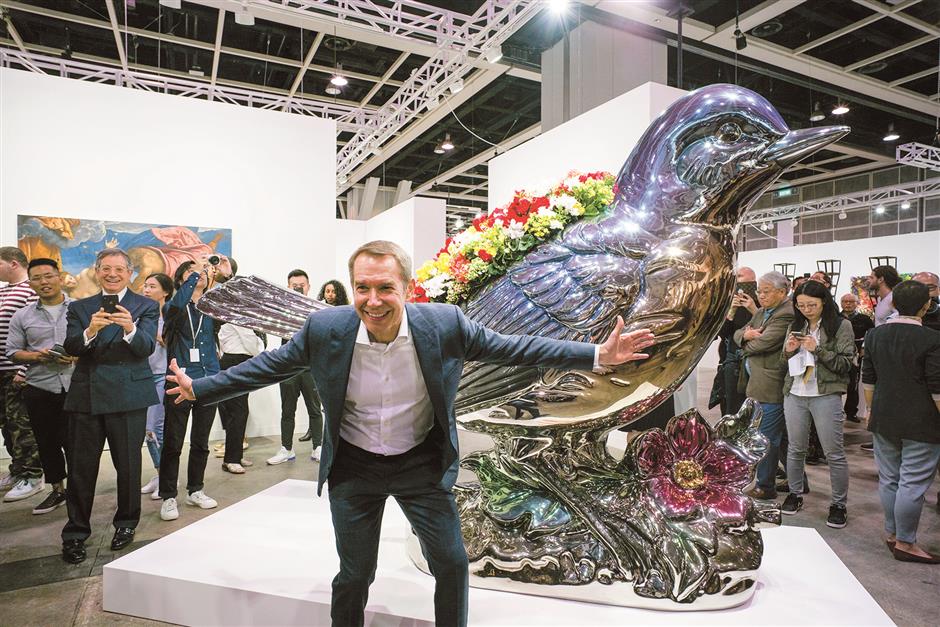 US artist Jeff Koons poses in front of his artwork “Bluebird Planter” at Art Basel in Hong Kong.

To his critics his work is overrated, overpriced and obvious. To his fans, he is a living legend — the incarnation of the Pop Art movement.

Either way, at 63, Jeff Koons says he just wants to focus on creating the art he wants to make.

Koons’ works are brash, voluptuous and carry astronomical price tags but that hasn’t dimmed appetite for his pieces in Asia, where he is presenting at Hong Kong’s edition of Art Basel — a top event for wealthy collectors looking to snap up new status symbols.

The American pioneer has brought some of his signature mirror-polished steel sculptures to the fair as well as his “Gazing Ball” series, in which shiny blue spheres are inserted into reproductions of classic European masterpieces, including works by Rembrandt and Tintoretto.

Koons set an auction record for the highest price paid for any work by a living artist in 2013 when his orange “Balloon Dog” fetched US$58.4 million at Christie’s in New York.

But he insists the monetary value attached to his art is just an “abstraction” to him.

“I’m flattered that my works are perceived by society as having some relevant value. But the beauty to have impact with real individuals, that they can come across their own potential, that’s what really brings me joy,” he said, impeccably dressed in a sharp dark blue suit.

His work is polarizing. In January, artists, gallery owners and officials in Paris signed an open letter objecting to a planned 12-meter tall “Bouquet of Tulips” memorial designed by Koons as a tribute to the victims of the terror attacks on the city in November 2015.

The letter described Koons as an “emblem of industrial art which is spectacular and speculative”.

Koons would not comment on controversy, but when asked how he deals with criticism, he said he tries to focus on his work.

“I think that people always find honesty very shocking. So when you are honest and just make the things that you want, it reveals something about human nature,” he said.

Today Koons is relaxed and lively at Hong Kong’s David Zwirner Gallery where some of his “Gazing Ball” pieces are on display, their glazed surfaces reflecting every corner of the exhibition space.

“Reflected surface affirms the viewer, affirms you, right here, right now, but it also affirms everything else in the world,” said Koons.

He describes the sapphire-colored spheres as “objects trying to communicate with the viewers.” His balloon animals are inspired by what it means to be a living, breathing organism, accepting oneself and others.

Koons says surrealist art has been a means for self-exploration since he was a teenager.

“Once you can go inward and find where you accept yourself, automatically you want to go outside, and you want to go to the external world. That’s the journey that art can take you (on),” he says.

Koons describes technology as a “wonderful tool” and recently partnered with Snapchat to create a Pokemon-Go type game in which users hunt virtual Koons sculptures.

He says he is working on a virtual reality project to be released in a year’s time but warns young artists not to see tech as a quick creative fix, rather a means to express something “metaphysical.” Most importantly, he says they must believe in themselves, recalling how when he started out there was no audience for his art and he had to move back in with his parents.

“I’ve always been a risk taker, because I believe in going for something. I believe in the excitement, the stimulation, of trying to achieve something,” he said.

“If there was failure, I really didn’t have any option other than to go for it.”