“Back in 2006, we still recruited locally, mostly within Zhejiang Province. But now our students come from 13 provinces and municipalities nationwide, as far as Yunnan and Guizhou provinces in southeast China,” school president Qian Jiangnan said.

The market for the operatic form is recovering. In one recent year, the 50 graduates received over 300 job offers.

Qian attributed that to the support of the government and warm-hearted philanthropists. Vacancies also need to be filled as older performers leave.

“A Yueju Opera artist’s golden years on stage may only last from her 30s to 40s,” said local official Lou Shaofeng.

Shengzhou is the birthplace of Yueju Opera. Its humble beginnings may be traced back to 1906, when local ballad singers in Dongwang Village staged performances for the first time wearing simple costumes and makeup. 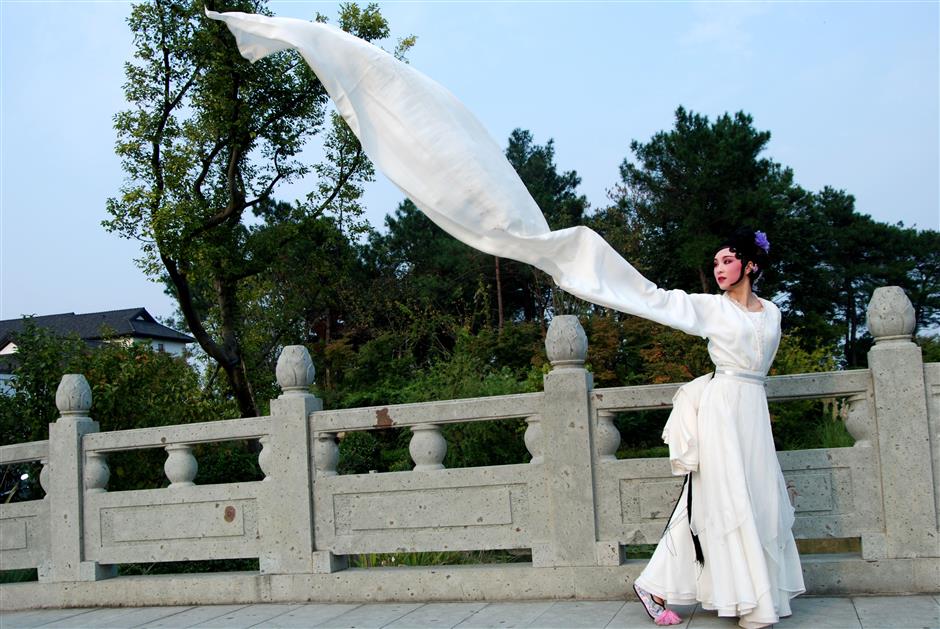 Back then, all the artists were men since it was considered indecent for women to perform on stage. It was not until the late 1920s that all-female performances gained popularity in Shanghai and since then became a feature of the opera.

“Unlike Peking Opera, which focuses more on warfare and historical events, Yueju Opera is more about love stories and family affairs, and therefore they were extremely welcomed by women, especially the well-off wives of the time,” said Lou.

In the 1960s, there were countless Yueju Opera troupes in more than 20 provinces in China. But as people found more ways to entertain themselves, the art form dropped out of favor.

The number of professional troupes fell to around a dozen across the country, while there were between 200 and 300 amateur groups. “In Shengzhou, we’ve got more than 100 registered Yueju Opera troupes,” Lou said.

Wang Xiaolong, a 19-year-old Yueju Opera artist, will graduate this summer. She has been studying how to act like a decent gentleman on stage for nine years.

At 12, she received her first costume, including two pairs of opera shoes — boots for playing officials and slip-ons for average young men. The shoes are custom-made with soles that are approximately 9 centimeters high.

The roles that she is specializing in are called sheng (生) or young men, as compared with dan (旦,young women), chou (丑,clowns) and laosheng (老生,old men).

“I’m only 1.66 meters tall, so I need a sole that high. Most of the sheng performers today are taller, even some of the dan performers in my class are taller than me,” Wang.

The higher soles also mean that the shoes are heavy. Every day Wang had to practice wearing them by walking in circles in the rehearsal room, from slow to fast.

The first two years at the school were spent mostly on basic training, helping performers develop their strength. When Wang was admitted to the “inheritor’s class” after finishing sixth grade, she had to do it all over again. 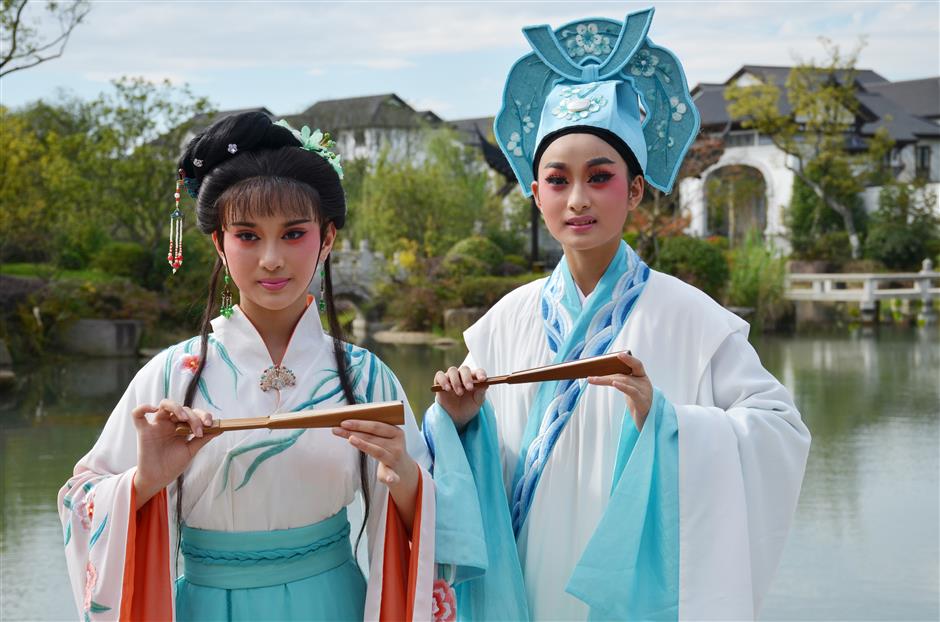 “The basics are very important for a performer, it shapes our physique and postures on stage,” she said, standing up to show the difference when she straightened her back and lifted her arms in the right place.

As sheng performers, students need to learn combative skills on stage. In Yueju Opera (and almost all Chinese operas), the performance is comprised of songs, speeches and a series of stylized movements, each of which has a specific meaning in a certain context.

For example, rolling forward on the floor may imply that the protagonist has just escaped from danger, or whipping her hair may indicate that the performer is in a state of great insanity and sorrow.

A cohort of the “inheritor’s class” is comprised of 15 students. In another three years’ time, they start to learn and imitate the artistic style of a certain school of Yueju Opera performance.

The school that Wang has been following was established by Yin Guifang in the 1960s. Her singing teacher at the school, who is in her 70s, was one of Yin’s students.

Compared to other stage art, Yueju Opera puts more emphasis on inheritance, especially the inheritance of vocal features. The Yin school performers are characterized by a softer and lingering voice.

Wang admits that she is still at the imitation stage. At this level, she spends most of the time in self-study. The difficult part comes from understanding the play and the role she is playing and how to present it with real passion when everything else on stage is pure symbolic abstraction.

The Yueju Opera repertoire includes many traditional plays, first staged in the 1940s and 1950s. Many are adapted from ancient literature and folklore. Some are difficult to relate to people.

“My favorite role so far is Zhou Ren in ‘Zhou Ren Wails at Funeral.’ But at first I could hardly understand why Zhou was sacrificing his own wife to save his brother’s,” Wang said.

“But when I put myself in his shoes, I began to know that was the tragedy of the times which he could barely break away, and I felt pity for him,” said Wang. 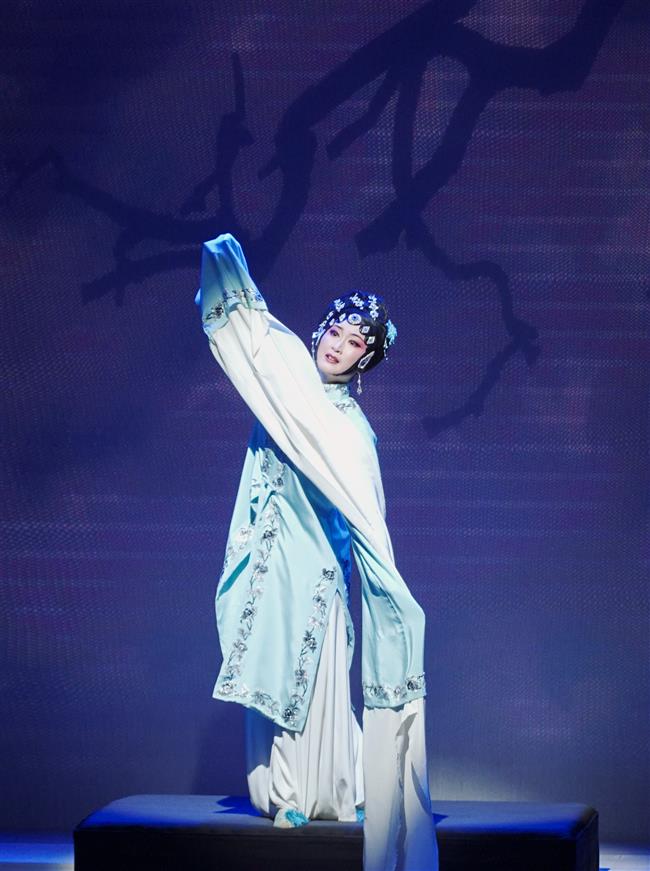 Tian Yuanyuan acts in a performance.

Yueju Opera has never stopped reinventing itself. As probably the most reformative Chinese opera art, it has a long tradition of assimilating elements from other stage art and performing new and original plays.

Wang said she was currently rehearsing a new play called “Xu Xian” for the coming Yueju Opera art festival, which has been held in Shengzhou for 17 consecutive years.

The play is based on a classic Chinese legend depicting the tragic love story between a white-snake-transformed woman and young man Xu Xian. Most of the previous adaptations focus on the female characters and Xu has been presented as a coward, an incapable mortal.

But in the new version, Xu is going to take his destiny in his own hands.

“In the past Xu was more of a negative role in the play, he hid away when the problem came. But in our play when Fahai the monk tries to separate them and imprison his wife, Xu commits suicide to save his family,” said Wang.

Fahai, the law enforcer, is also not as determined as before. He vacillates. He is not sure if the white snake carrying a human baby is still a spirited form or a human being as well.

The depth and complexity added to each character brings more philosophical thinking to the original story. And it opens a fissure in the orderly Yueju Opera world, where the good guy is never bad, and traditional beliefs must be obeyed and safeguarded.

Apart from the newly adapted play, during the art festival there are also traditional plays including the classic “Birthday Celebration by Five Daughters” and selected scenes from well-known plays prepared for those who have not seen any Yueju Opera plays before.

“The audience is always the key to revitalizing Yueju Opera. We hope to invite young audience to the theater and grow a seed in them, so that one day it may bloom at the right time,” Qian said. 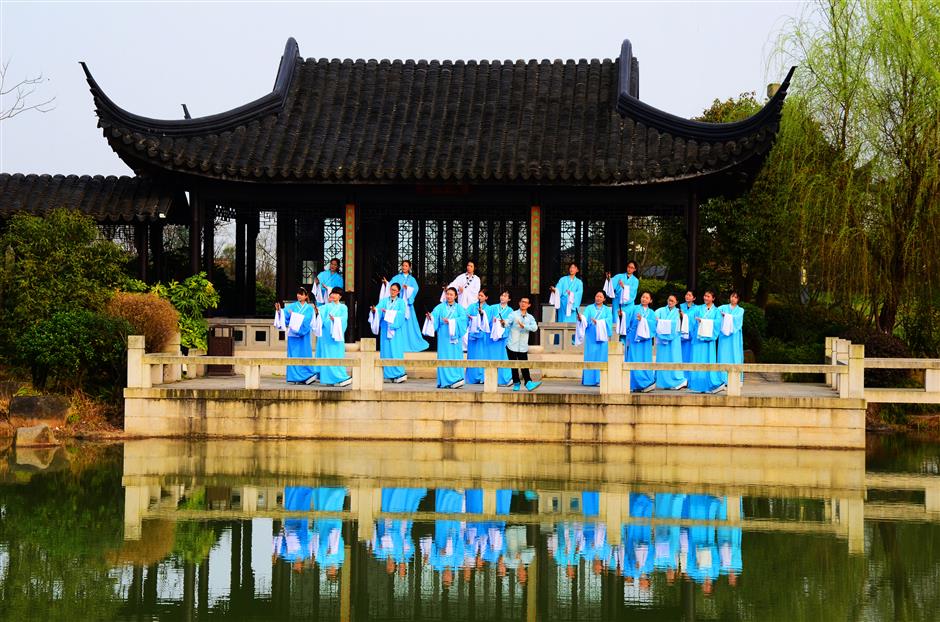 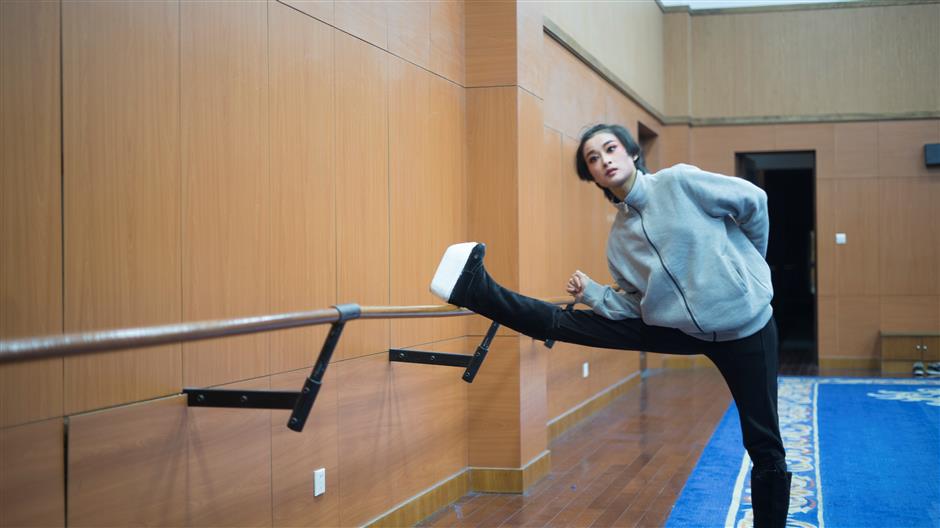 Wang Xiaolong warms up before her performance.