In Hangzhou, 47-year-old artisan Zhang Zhengang has been hammering gold and silver for about 28 years. In his skilled hands, the precious metal is transformed into handicrafts with ornate patterns and smooth lines.

Today, he is listed as an intangible cultural inheritor in Shangcheng District. As the only craftsman specializing in gold and silver sculpture in the city, he tutors about 20 people in efforts to promote the art among young people.

“Some people regard gold sculpture as the same as making accessories. In fact they are totally different,” Zhang told Shanghai Daily. “Sculpturing requires more artistic knowledge and professional techniques, since most modern accessories are mass-produced by fixed steel moulds.”

“He integrated practicability with aesthetics in creating vessels, since Qing Dynasty elites preferred luxurious products for daily use,” said Zhang. 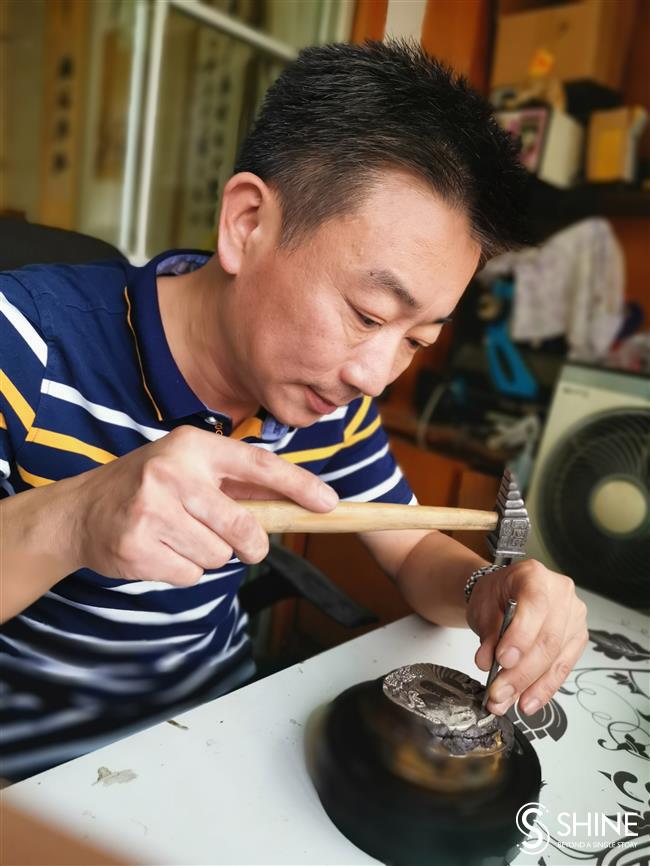 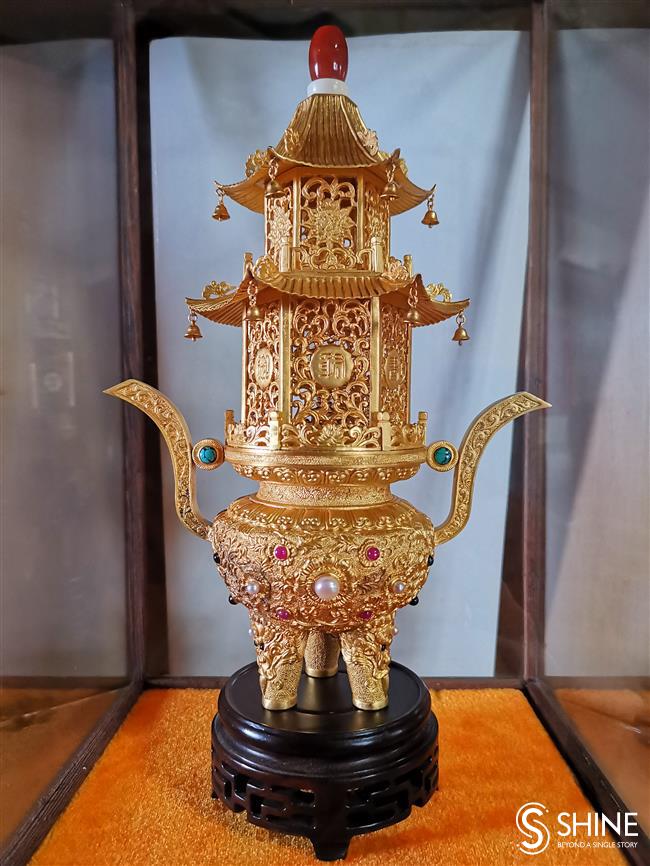 A gold-carving work by Zhang Zhengang

In ancient times, gold vessels were a big thing. The royal court and high-class families bought containers that reflected their social status and wealth.

“Today, my focus switches to beauty, as gold handicrafts are more often used to decorate houses rather than containing wine,” Zhang added.

One of Zhang’s most famous works is a silver Asoka figurine which resembles one unearthed near the Leifeng Pagoda in Hangzhou.

Its base was embossed with images of the Buddha and Bodhi trees, while the body is decorated with four leaves sculptured with Buddhist stories. This work was later collected by a local connoisseur.

Zhang began studying painting when he was only 5. Born into a family of traditional artisans, he began his career at 19 and was apprenticed to his mother.

“A professional foundation in art is necessary to learn this craft. Otherwise, skills cannot develop just within a few years,” Zhang said. “Design and artistic knowledge give a boost to carving techniques, and in return make the artworks better.”

After acquiring basic skills from his mother, he worked at Hangzhou Xinyuan Accessory Outlet, a time-honored brand established in 1865. Today, the store is still operating on Zhongshan Road.

In 1993, Zhang was hired by a factory in Xianju County. The county, located in southeast Zhejiang Province, has long been developing its metal-smelting industry.

In the mid-1990s, he returned to Hangzhou and started to make handicrafts for a foreign trade company.

Due to the sophisticated carving and hammering process, each of Zhang’s pieces takes at least three months to complete.

For instance, his gold vases are made of two parts. These are hammered together, and the seams are made invisible by Zhang’s skills. 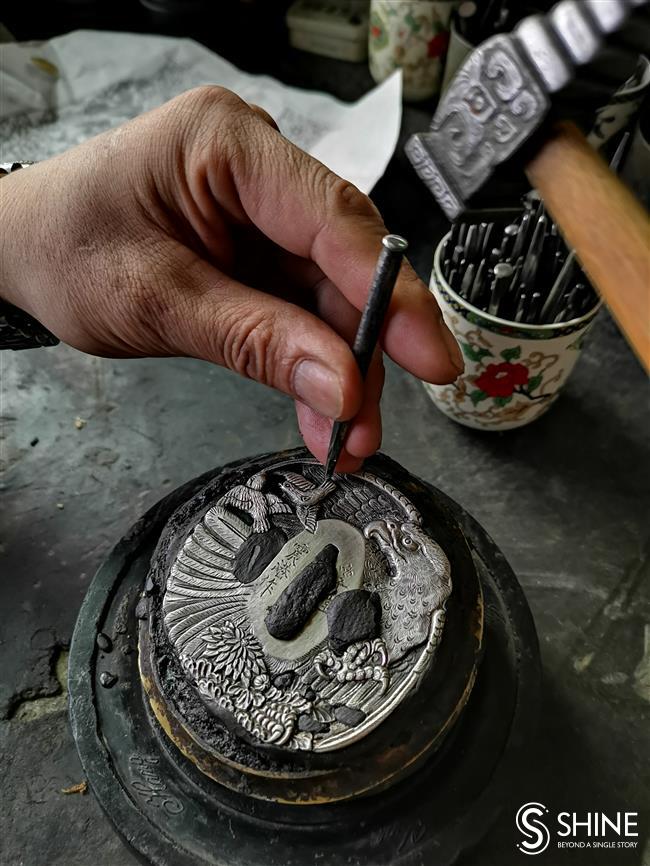 The lid of the silver kettle 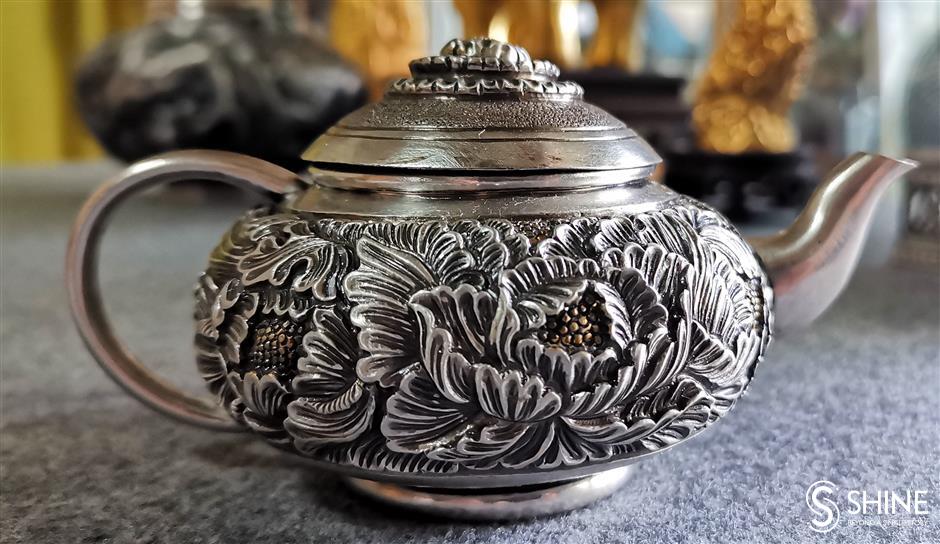 “Students can independently complete simple works after three months under my tutoring. But it takes years of practice to reach the pinnacle of sculpting,” Zhang told Shanghai Daily.

“I encourage people to learn this craft because it includes design and art along with sculpture. Machines are used to produce metal artworks, but mass production is still inferior to handmade craftsmanship.”

This year, Zhang only completed three works, which were all themed on the 70th anniversary of the founding of the People’s Republic of China.

According to records, north Zhejiang Province was dotted with gold and silversmiths in ancient times. Competition among craftsmen was fierce, which forced them to sharpen their talent.

Like other traditions, gold and silver sculpture has declined over the centuries. In recent years, market demand for gold handicrafts has shrunk. Zhang has had to design factory moulds for mass-produced swords just to make a living.