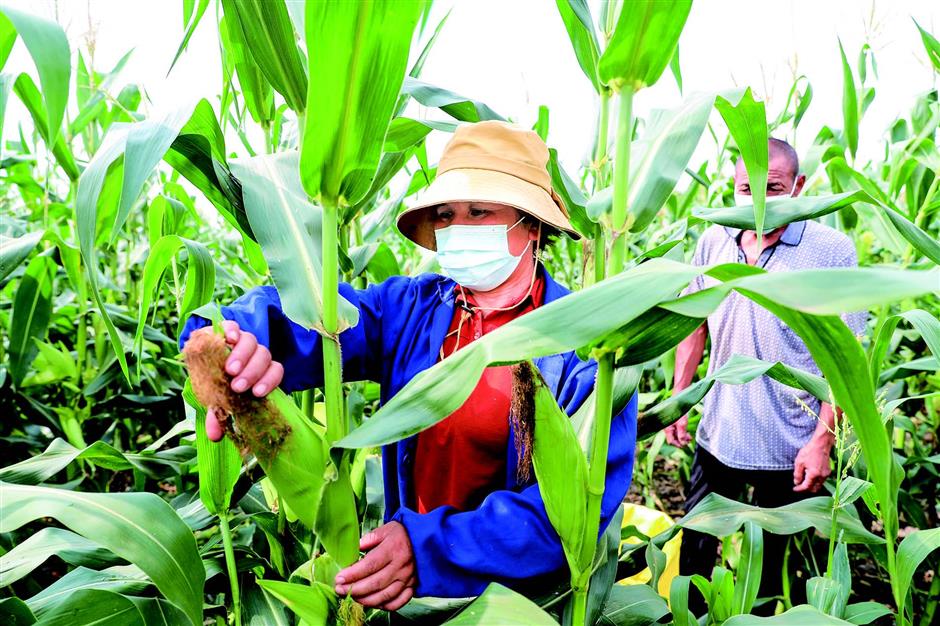 Songjiang's Xiaokunshan Town has helped its corn farmers with their harvest to cope with the impact of the pandemic.

Farmer Liu Jing and her husband Sun Yunhua worried about sowing their corn seeds several months ago when the pandemic was at its height.

Now, their first batch of 5,000 kilograms of corn is unable to get to market.

It has been a rollercoaster ride for the couple.

On June 20, Liu and some farmers were seen busy picking corn in the field. The stalks, about as high as an average adult person, formed a green curtain waving in the wind.

"You can eat a sweet corn raw. It tastes crispy and juicy," said Liu, who broke a cob to show its snowy kernels.

Liu's first batch of corn, 5 mu (0.33 hectares) of sweet corn and 5 mu of colored glutinous corn, drew locals to the field to buy when they heard the news of the bumper harvest.

Seeing the promising harvest scenes, few could imagine how the couple had worried about the seed sowing in early April when Shanghai was in its citywide lockdown.

"The pandemic this year caused fertilizer and labor shortages," said Sun, who had decided to report their condition to the town's Xiaokunshan Agricultural Development Co.

"We acted quickly with the harvest time and solved the plight for the couple," said Yao Shoulong, a manager with the Xiaokunshan Agricultural Development Co.

The company dispatched five temporary workers to help with corn sowing and some fertilizer was also sent to the couple.

"We didn't expect the township government would offer so much help so quickly," said Sun.

The couple's first batch of 5,000 kilograms is expected to be sold out within five days .

Sales of other corn will last till the end of July.

﻿
Special Reports
﻿
61771
,
61922
,
Town in suburban district helps farm couple
Songjiang signs agreements on 25 projects at investment meet
Phase Two of Rafael Sky City now in full swing
5,000 vie for 40 reserve talent placements
The good and the bad for business owners
It's hot out there, so hit the water at InterContinental Shanghai Wonderland!
The perfect season for tasty yellow crabs
Disability no hurdle for this Songjiang athlete
A showcase of Song splendors in Songjiang District
Enjoy blooms and farm fun in Songjiang parks
EXPLORE SHINE