In 1992, a new Minhang District appeared in Shanghai through a combination of the old district and Shanghai County. Vast changes have taken place as the district went through its urbanization process. As an artery that connects Minhang with downtown Shanghai, Humin Road, with its patriotic origin, helps the district adapt to urban prosperity. The district also sticks to traditional and unique elements. Use this column as a guide to explore Minhang, its changes and what remains the same by tracing along Humin Road. 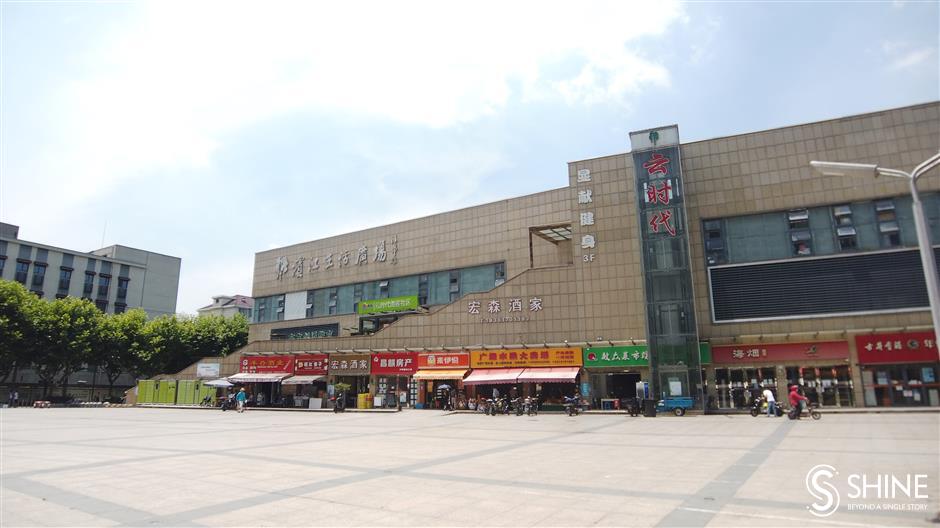 The site of Minyuan Garden is now the district's Binjiang Life Plaza.

Shortly after the Fu-Min-Nan-Cho Road, or Downtown Shanghai-Minhang South Extension Road and the prototype of Humin Road, opened to traffic on January 1, 1923, Li Yingshi (1881-1933), the initiator who raised funds to build the road, made another bold venture.

He sold his ancestral property, raising funds to purchase 40 mu (2.67 hectares) of land near the Minhang Bus Station and built the Minyuan Garden.

The garden, though once ridiculed by a Shanghai downtown literati as "disappointing and devoid of merit like a rustic maid," attracted tourists to Minhang and boosted its road traffic.

As the pandemic now wanes, this story offers a guide for visitors to access the history of Minyuan Garden and take a one-day tour along Humin Road from its start in Minhang District to the end.

The former address of Minyuan Garden lay in the vicinity of the Huangpu River, west of Humin Road and north of Huaping Road. As the first private garden for profit in Minhang, it was opposite to and faced the side of Minhang Old Street. Its architect was Yao Bohong, owner of Bansongyuan Garden (destroyed in August 1937 by the Japanese air force).

The archway of Minyuan Garden faced east along Humin Road. An avenue running east-west had entertainment and catering buildings on both sides. The road finally reached an artificial river decorated with a marble boat, hexagonal pavilion and zigzag bridge. There were two hills in the south of the garden, one 10 meters high and the other 7 meters high, built up with excavated mud from an artificial pond. Visitors who climbed the hills could get a bird's-eye view of Minhang and the Huangpu River scenery.

The fate of the garden was entwined with contemporary Chinese history. It was first damaged in the Qilu Battle in 1924. As the Northern Expedition War broke out three years later, the garden suffered yet more ravages. It was seized by the Japanese army in 1937 and devastated by these forces, the pro-Japanese puppet regime army and some local rascals.

After the founding of the People's Republic of China in 1949, only some rockery and pavilion relics and the two mud hills survived. The hills were used to fill the pond and a nearby river in 1953.

The site of Minyuan Garden is now the district's Binjiang Life Plaza.

Though the garden has disappeared from the map, the history and culture related to its founder can still be felt during a visit along Humin Road.

A route of pilgrimage

The southernmost tip of Humin Road starts from near the Minhang Ferry Station of Xidu-Minhang Ferry Line. Further south is the Huangpu River. The Minpu No. 2 Bridge stretches over it and connects Minhang with neighboring Fengxian District. The road's southern extension in Fengxian is the Shanghai-Hangzhou Expressway. 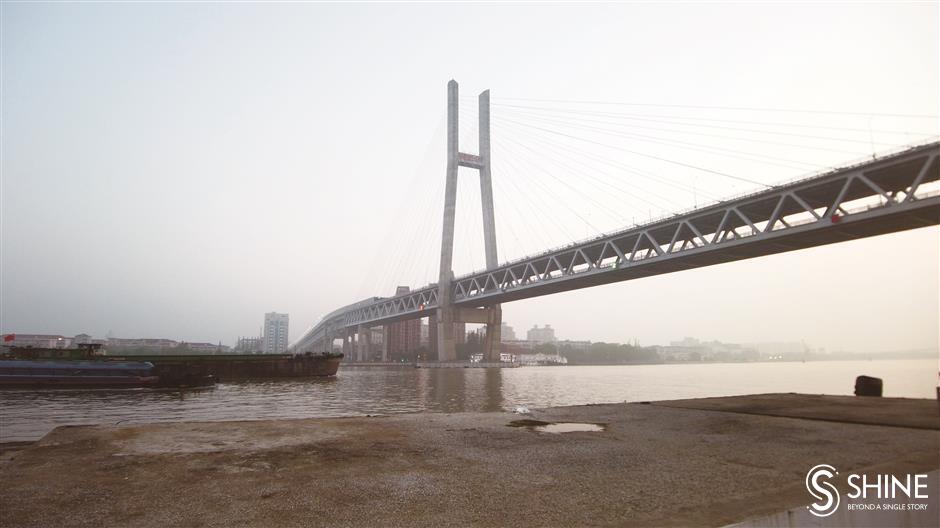 At 5:15am each morning, the Xidu Ferry Station in Fengxian welcomes its first ferry boat across the river. Middle-aged or elderly women wait at the pier. They pull bicycles loaded with vegetables to sell or janitorial tools to work as baojie (a cleaner) in Minhang. Among the bustling crowd there are also deliverymen and factory workers sitting on their motorbikes waiting for their departure. These are the first batch of passengers to Minhang, the majority of them busy making a living. Among the subsequent passengers are couples doing cycling exercises across districts and retirees who visit Minhang to have fun. 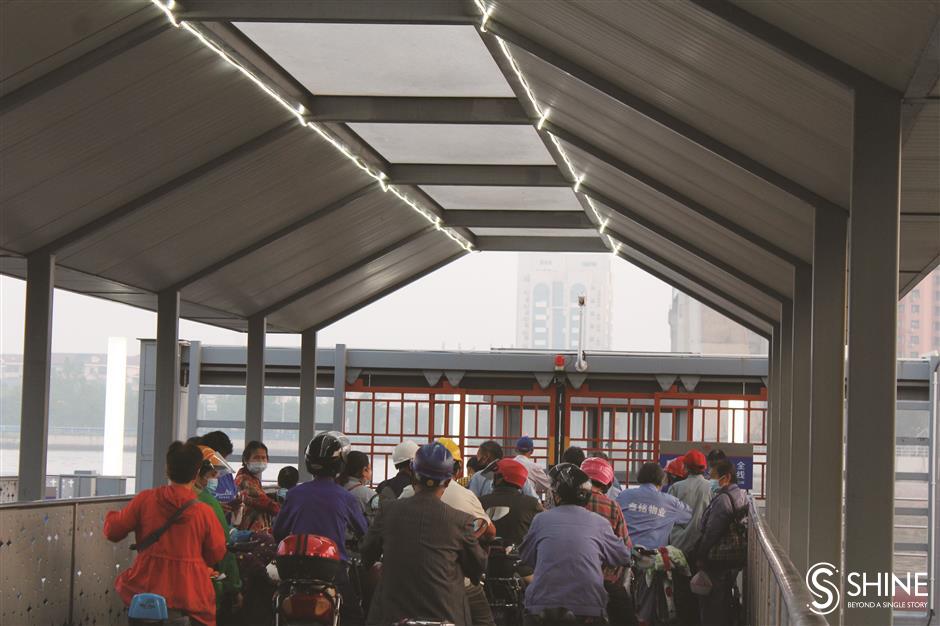 People in Xidu take the first ferry boat for Minhang.

As the ferry boat casts its anchor, the pier vibrates due to the sudden stop of the boat's momentum. People getting off leave along one path and those getting on embark via the other.

The Minhang Ferry Station dates back to the late Qing Dynasty (1644-1911) and the earlier Republic of China period (1912-1949). It evolved from ferrymen rowing paddle boats. Its first ferry boat powered by diesel opened to traffic on October 10, 1932.

The ferry line reached its peak from the end of the 1980s to the beginning of the 1990s when the rapid prospering of Minhang Economic and Technological Development Zone, with its Fortune Global 500 companies, attracted township youths over the Huangpu River from Jinhui, Wuqiao and Xidu areas to work in Minhang. Its daily passenger capacity at that time was around 27,000.

Ma Yifei, who has been in the ferry trade for more than 10 years and employed as a Party secretary of Minhang Ferry Station since 2018, said its daily passenger capacity in 2018 was around 12,000.

"As the Fengpu, Minpu, Minpu No. 2 and Minpu No. 3 bridges were set up, the underwater channels were dug out and construction of Metro Line 5 was completed, people had more choices when crossing the river," Ma said.

"The ferry has its limitations when problems like bad weather, rising tide and busy vessel traffic occur. People then choose other alternatives, find them convenient, and may stop taking the ferry. The single trip prices between Minhang and Xidu now range from 2 yuan (30 US cents) to 4 yuan. Morning and night rush hours last about an hour and a half from 6:30am to 8am and from 4:30pm to 6pm," he said.

"The ferry station was moved in January 2019 due to some effects of a bridge pier. We moved it about 300 meters evenly upwards," Ma added.

The Old Residence of Li Yingshi is within the square encircled by Humin, Pujiang, Lanping and Jianshe roads and opposite the ferry station.

With a bungalow and a Japanese-style villa extant, and a courtyard overgrown with a profusion of woods, it now belongs to a Ye family. It was listed as a Minhang District cultural relic site in 2016.

Visitors can take a peek at the old residence by standing on a rise on the western corner of Minhang South Bund Park, a greenbelt renovated from a former wet market in 2018. Li died inside the residence on November 13, 1933 after suffering a stoke in 1931.

Minhang Bus Station, at 60 Humin Road, is where Xumin (Xujiahui-Minhang) Bus Line departs. The bus service, originating from Humin Bus Line, opened to traffic on September 5, 1959 after the Humin Road reconstruction project was completed. The bus line was opened to provide commuting services for workers of the "Big Four Factories" as Shanghai started to carve out an industrial satellite city for Minhang.

One hundred years ago people visiting the Minyuan Garden climbed the two mud hills to have a bird's-eye view of Minhang. Today residents and tourists are carried to a height of 108 meters on the big Ferris wheel in Jinjiang Amusement Park. 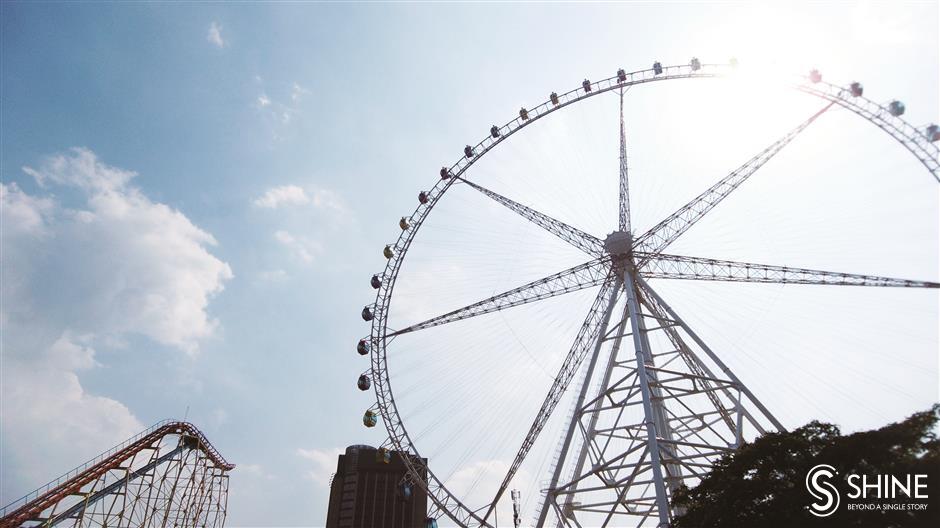 "For so many years I've liked you so much," Lin Huina, a Minhang local resident born in 1985, wrote in her Dazhong Dianping (a popular listing app) comment. "Though the recreation options are fewer than other newly opened parks and they are less up-to-date, I always have great fun in it."

The park, the last big tourist site within Minhang District along Humin Road before it stretches into neighboring Xuhui District, opened for business on February 1, 1985.

A document preserved at Shanghai Archives Bureau shows a government approval on December 16, 1983. "We agreed that construction of the Kangle Park (the previous name of Jinjiang Amusement Park) is feasible … When it is completed, the park will become another tourist site and enrich Shanghai people's life."

In its earliest stage the park introduced 18 recreation facilities from Japan. In its trial operation period starting from October 1, 1984, eight of them opened for business. Though limited, they created a sensation. People rushed to experience Shanghai's first big modern amusement park.

"Since 1992 when I was about 6 or 7 years old, my father took me to the amusement park frequently, sometimes once a month. My father was a big fan of the park, too," Lin recalled. "At that time there were rockeries and large areas of greenery inside the park, which are now packed closely with more recreation items."

Almost every New Year's Day, Lin went to ride the park's Ferris wheel as her way of celebration to welcome the New Year.

"When I was at the top and overlooked the ground, I could notice the changes of the landscape. Every few years some high-rises rose and the landscape along Humin Road changed as well," Lin said. A kid with a blessed childhood, Lin is now running wedding gown services in Minhang.

As the one-day tour along Humin Road ends at the park, we bless this road of patriotism, the district it penetrates and helps, and recall the founding father of the road who matters to all of these. 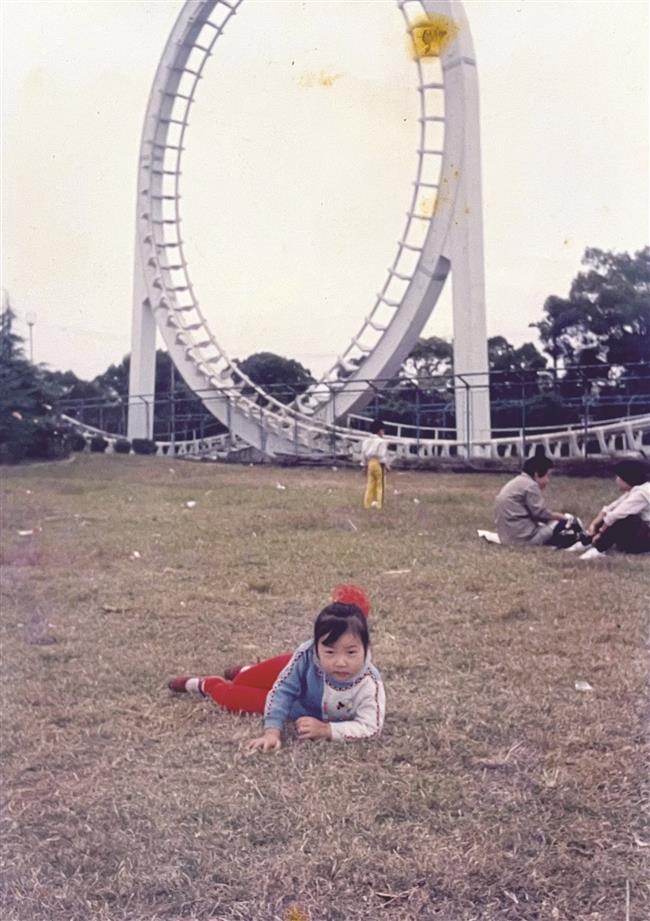 A file photo of Lin Huina, a frequent visitor to Jinjiang Amusement Park, taken in the 1990s

Visitors can arrive at Xidu Station of Metro Line 5 one day ahead, lodge at a small hotel, watch the sunrise under Minpu No. 2 Bridge, then take the ferry to Minhang across the Huangpu River, and choose either the Xumin Bus Line or Metro Line 1 or 5 to arrive at Jinjiang Amusement Park.