From classic gardens to riverfront parks, Minhang has it all 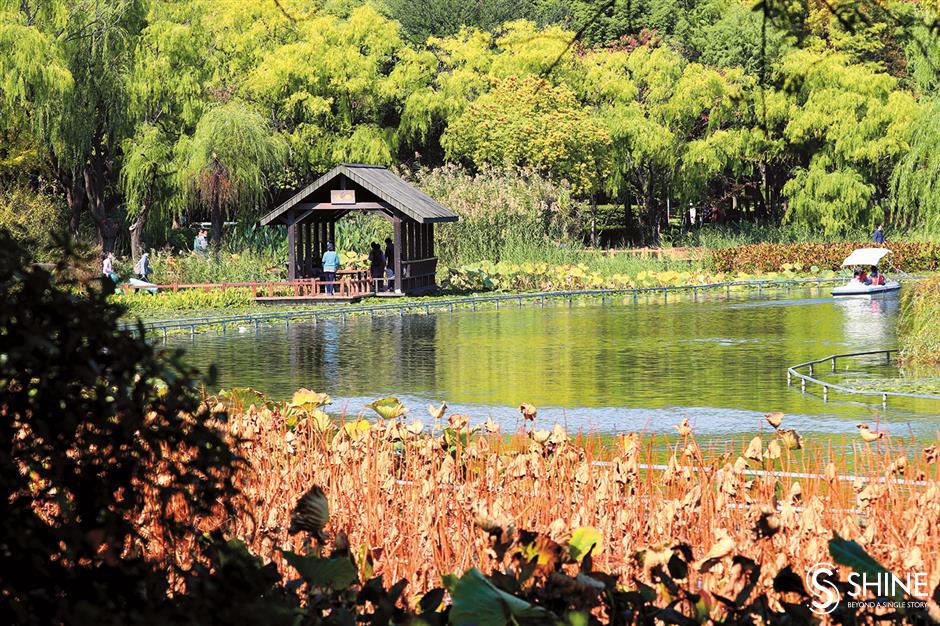 As an artery that connects Minhang with downtown Shanghai, the arterial Humin Road, with its patriotic origin, helps the district adapt to urban prosperity while boasting a rich history of architecturally designed green space like riverfront parks and classical gardens.

The garden, at an east-west alley in the southern tip of Humin Road, used to cover 2,000 square meters in its hey day. It had an east entrance and a bus stop. The garden featured a bamboo forest, rockeries, pond, swings and leisure facilities such as a land boat, used as a prop for folk dances. Its paths were paved with gray tiles and collage of colored porcelain, with pine trees, osmanthus, magnolia and wintersweets planted on both sides.

Its former owner Li, a meritorious general in the Revolution of 1911, was also a celebrated industrialist and an initiator who raised funds for building the Fu-Min-Nan-Cho Road, the prototype of the district's artery Humin Road. He died at the residence at the age of 52 about 90 years ago.

A businessman surnamed Ye, who ran general merchandise, cloth and silk businesses, bought the residence after 1958.

Its southeast section has been renovated into a riverfront park that overlooks the Minpu No. 2 Bridge. In its south is the Minhang Ferry Station of Xidu-Minhang Ferry Line.

A descendent of the Ye family described the place as a "Sukhavati," or pure land in a bustling city like Shanghai, where "you may be steeped in thought amid the hooting sound of riverboats when night falls."

The development history of parks in Minhang spans from the trial operation of its Minyuan Garden in August 1923, to the initiation of construction of Qianwan Park in November this year.

It will continue with more parks on its construction agenda.

Meanwhile, the district is seeing its ecology improving, and is growing toward a modern urban area of Shanghai.

Classic private gardens were trendy in the area in the 1920s and 1930s, followed by gardens with both a vintage and modern tint. After a new Minhang District appeared in Shanghai through a combination of the old district and Shanghai County in 1992, more parks, including culture park, country park, bay park, community park, pocket park and greenbelt were created.

By the end of 2021 the district was noted for its 128 diverse parks, with a forest coverage rate of 18.48 percent. Its per capita park and greenery area reached 10.6 square meters.

Shortly after construction of Hu-Min-Nan-Cho Road was completed in 1922, Li financed the purchase of 40 mu (2.67 hectares) of land near the Minhang Bus Station to build the Minyuan Garden. The garden was intended to bring more people to Minhang and therefore boost road traffic.

It covered 18,000 square meters, and caused sensation in downtown Shanghai where people were filled with wonder that "Shanghai's suburb now has a big park."

In the 1930s, garden construction in Minhang centered around its west suburban area (now Changning and Xuhui districts), Longhua and Caohejing areas (now Xuhui District) and its Beiqiao Town. The variety of gardens included the Sassoon Villa, the Bai Mansion, the Yao's Garden, the Huang's Garden, the Cao's Cemetery, the Kangjian Park, the Guanshengyuan Park and the Yang's Garden.

Among them was the Yang's Garden, at 421 Xinbang Road, with a plum tree orchard cultivated by a Yang family in 1930. It was turned into a state-run park in 1951 and reopened as the Xinzhuang Park after a facelift.

The old Minhang District was an industrial center after the founding of the People's Republic of China in 1949.

It opened its first park, the Red Park, at 354 Jiangchuan Road in July 1960. The park was a combination of some greenbelt from Shanghai Steam Turbine Factory, a primary school and some farmland. It was celebrated for its "red plants" like the red leaf plum, red maple and trident maple trees.

Shanghai County, the future district's other component, boasted a number of parks.

According to statistics in 1984, Shanghai County, with its seven parks, topped Shanghai in terms of park number. It had the two professional parks in Shanghai, Shanghai Zoo and Shanghai Botanical Garden. The other five parks were noted for their Jiangnan-style scenery's like osmanthus, plum and peach blossoms.

Except for the Xinzhuang Park, six of the seven parks were put under the jurisdiction of Changning and Xuhui districts in the 1980s and 1990s during some administrative adjustment. 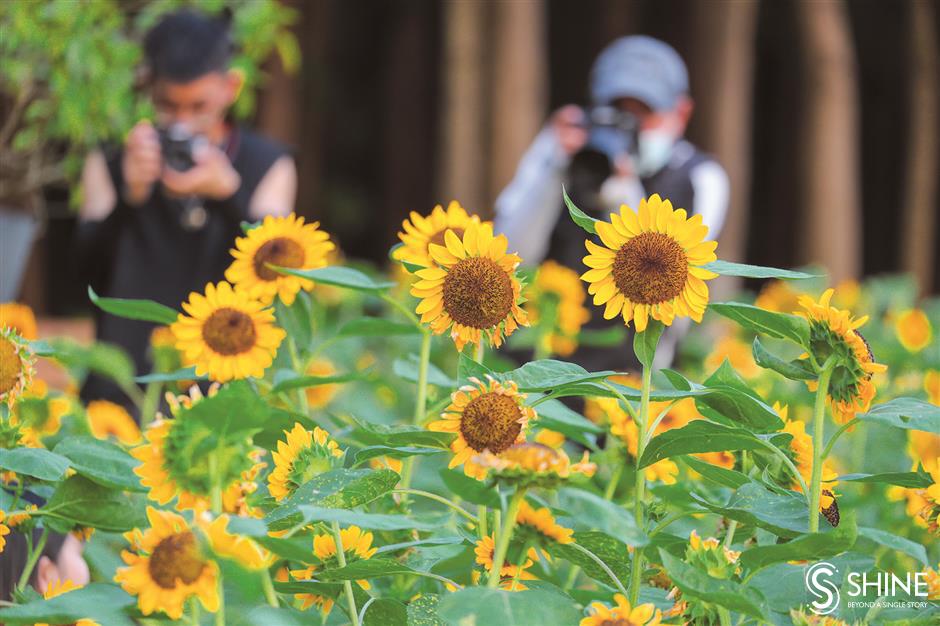 Riding a boat in a park at the doorstep is a favorite pastime for Minhang people.

As the new Minhang District appeared in 1992, a surge of new parks were created in the district. They are the Ancient Wisteria Park, Minhang Hanxiang Water Garden, Minhang Sports Park, the greenbelt in Hongqiao Central Business District, Minhang Culture Park, Pujiang First Bay Park and Pujiang Country Park, among others.

The Ancient Wisteria Park at 148 Lincang Road used to be the site of a town renowned for its wisteria.

Dong Yiyang, a poet in the Ming Dynasty (1368-1644), loved wisteria and planted some in the area. After he passed away, people paid tribute to him and tended the wisterias so well that the dense wisteria trees shaded an entire street that later developed into a bustling town.

One of the wisteria plants, Shanghai's oldest, has been preserved till now. The district government and Shanghai Landscape Bureau spent 6.6 million yuan (US$910,140) in building the Ancient Wisteria Park, which opened in December 1999.

The Pujiang First Bay Park, located along the northern bend of the Huangpu River, is both a water conservation forest and an ecological park that offers leisure and sightseeing.

Designs for it was solicited globally in 2002.

Through assessment from a panel lead by Chinese Academy of Sciences academician Zheng Shiling, URBIS from Australia won.

Its first 1.1-kilometer-long riverfront model section was completed in 2004. Noted for its forest and wetland landscape, the park has a rich diversity of plants that include high forest, bushes, cover plants and water plants.

It was extended eastward for another 500 meters between 2006 and 2016. The park now attracts a large number of tourists and residents in spring outing and for leisure activities.

On the district's future parks construction agenda, the Qianwan Park in the Hongqiao International Hub is expected to be the largest riverfront park in downtown Shanghai when completed.

To build the park, water will be diverted westward from Suzhou Creek and connected with artificial lakes and waterways to form a C-shaped water system in the park. It will also boast two artificial lakes, three function zones on ecology, culture and sports, and 18 scenic sites. 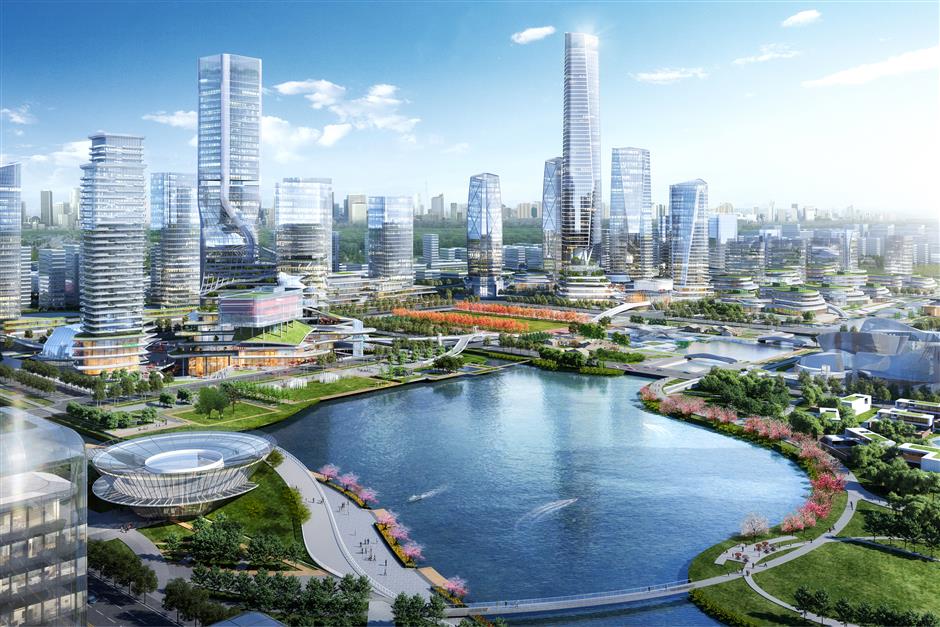 An artist's rendition of the Qianwan Park being built in the Hongqiao International Hub. It is expected to be the largest riverfront park in downtown Shanghai when completed.