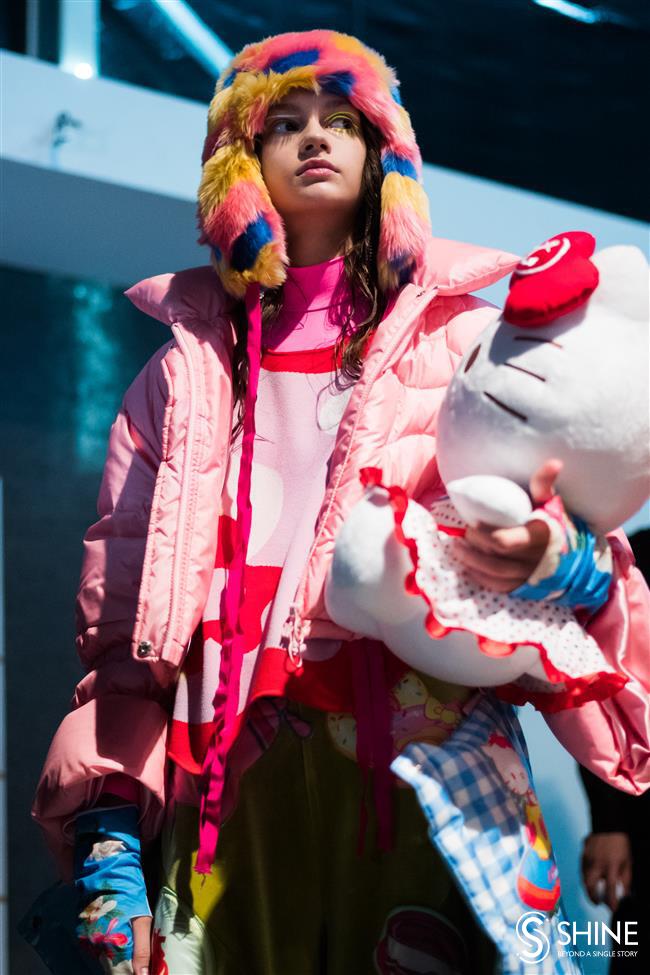 Shanghai Fashion Week attracted a number of young Chinese designers with an international education background to return to the city with clothing that was both practical and affordable. Their focus was on everyday clothes that incorporated Chinese elements.

Shanghai-based Shushu/Tong is popular with foreign bloggers and buyers, combining grunge street style with an exclusive tailoring finish. British fashion blogger Susie Lau (also known as Susie Bubble), whose Style Bubble blog is one of the most successful and widely recognized since it started in 2006, was wearing Shushu/Tong at the event.

Lau said, “This is my third time at Shanghai Fashion Week but I still find it super inspiring. As a fashion capital outside the four typical ones — Milan, Paris, London and New York — Shanghai also has a rather deep talent pool. The number of new Chinese designers who graduated from first-rate design schools that come back to Shanghai is increasing these years. They are showing their interesting works here. In my view, it’s really a talent-spotting occasion.

”Thanks to the growing popularity of Chinese independent designer brands, many foreign buyers were in the city to find more new brands. 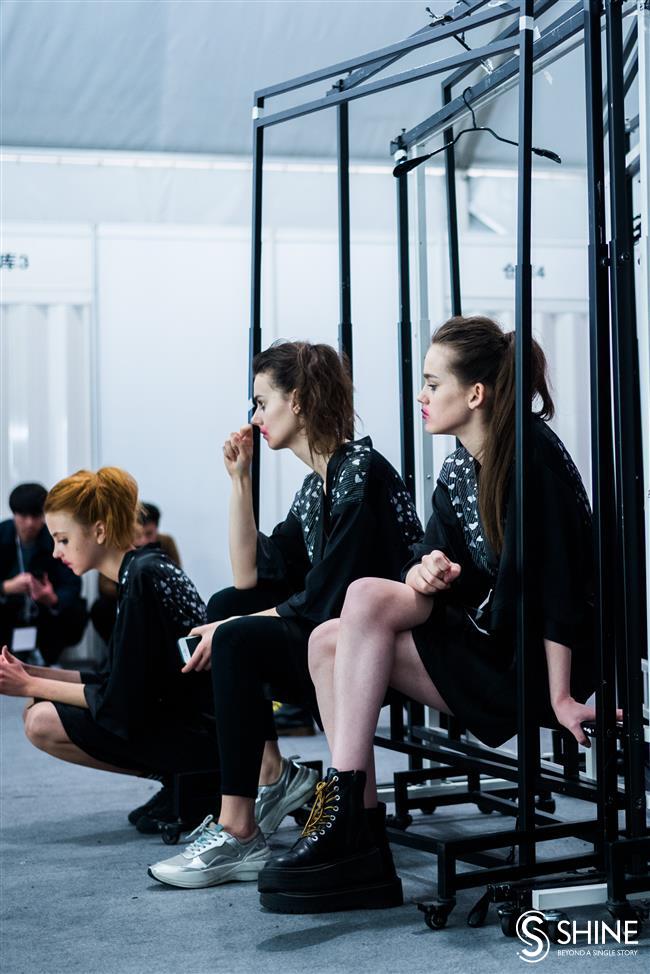 Models take a rest at the backstage of the show.

Ida Peterson, buying director of Browns, a designer boutique based in London, was also present at Mode.

“I think there’s only advantage. If any disadvantages in the past, I think that is difficult to find Chinese designers outside of China. But now people like me are invited to this occasion. And I think more people hearing about Shanghai Fashion Week, there will be more people coming here, the future is bright,” Peterson said.

“To me, I think the amazing thing of the Chinese designers is that there is not a single direction that they are going so that it can’t be just one leader. Because I think that would depend on the consumers,” said Peterson. “As you can see, there’re various kinds of designs. Someone designs sporty clothes, and streetwear can also make use of some very beautiful and feminine elements. There’re also other incredibly creative designers, like Susan Fang, who I saw yesterday. There’s also some designers who prefer classic style, somewhat Celine. I think probably there will be at least four different channels, each with one or two leaders. So, not just one leader but many people.”

Aukse Grei, a Beijing-based fashion photographer, said: “I am quite excited because I really like Chinese designers. I think they are very inspiring, not afraid of taking risks and always showing things unique, which I haven’t seen before.”

Shanghai Fashion Week is not only a stage for Chinese brands and designers, but also important for international brands who want to reach the huge Chinese market.

A McKinsey-BoF report said China will overtake the US as the world’s largest fashion market this year.

“In Asia, there’s an emerging market where lots of the money is spent on Shanghai,” said Tianwei Zhang of Women’s Wear Daily. 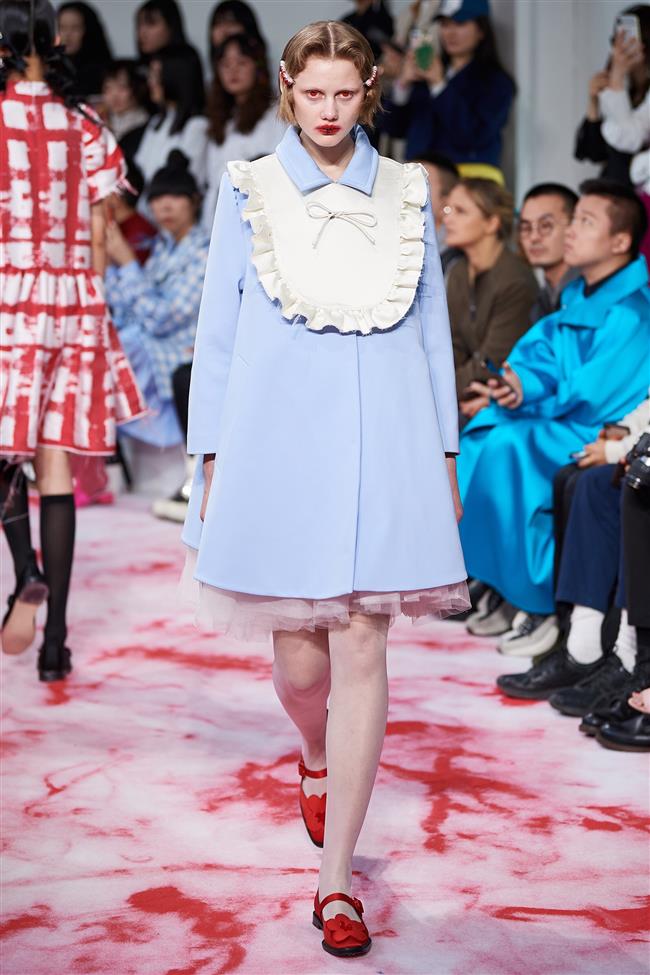 A model in a Shushu/Tong dress

Statistics from Shanghai Commission of Commerce showed that there were 835 new stores opened in the city last year, 301 of them making their Chinese debut.More than 3,000 brands launched new global products in Shanghai and in November last year, the first China International Import Expo was held with over 5,000 new products.

This season, the place and the form of shows were full of variety, attracting more public involvement. Apart from Taiping Lake in Xintiandi, two new landmarks were chosen as show venues — the Columbia Circle on Yan’an Road W., a renovated hub for fashion and leisure arts, and new art museum TankShanghai.

Some of the designer brands choose interactive shows instead of the catwalk.At the Ximonlee show at the Columbia Circle, the models wore uniforms to perform in set situations, such as meetings and conversations.

In previous years, most Chinese designer brands were priced at 2,000-5,000 yuan (US$300-750). However, in the past two years, many new designer brands have chosen to sell on Tmall at lower prices. For example, a Ms Min shirt chosen by Lau costs 428 yuan at its Tmall store. 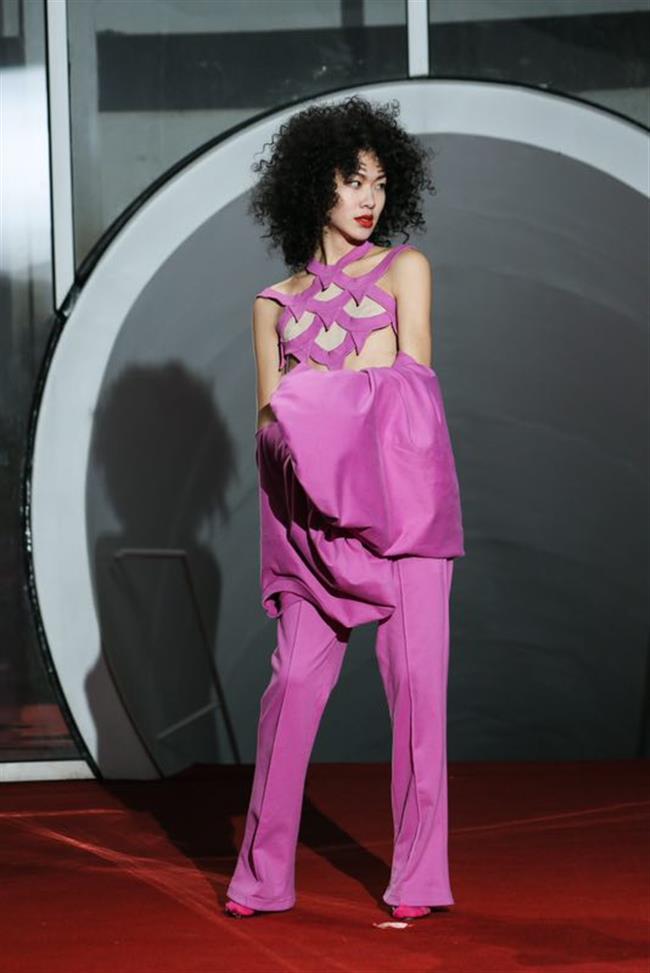 A model in a rose-red Sirloin outfit 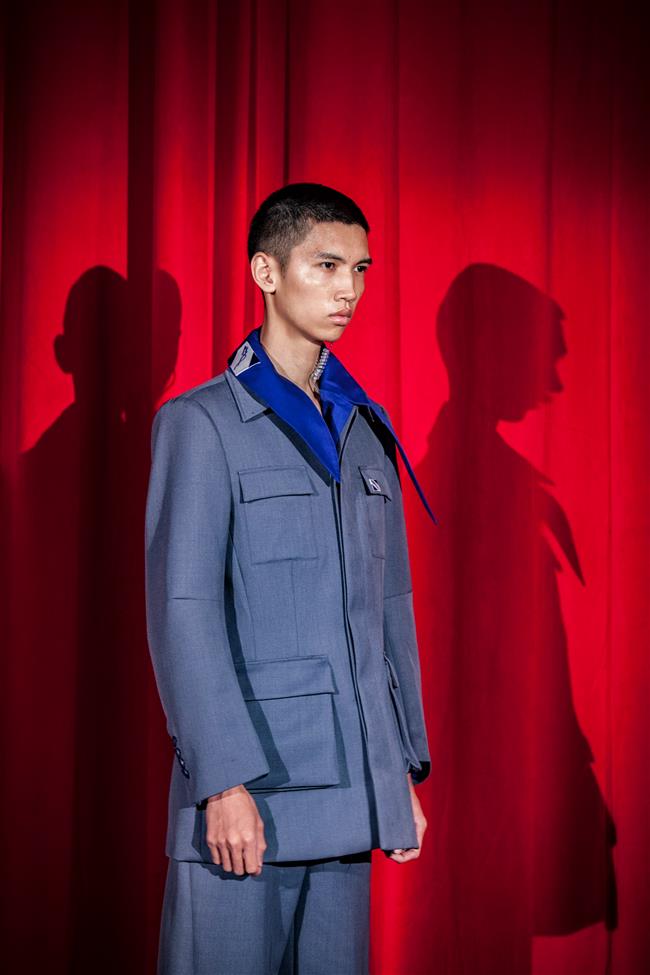 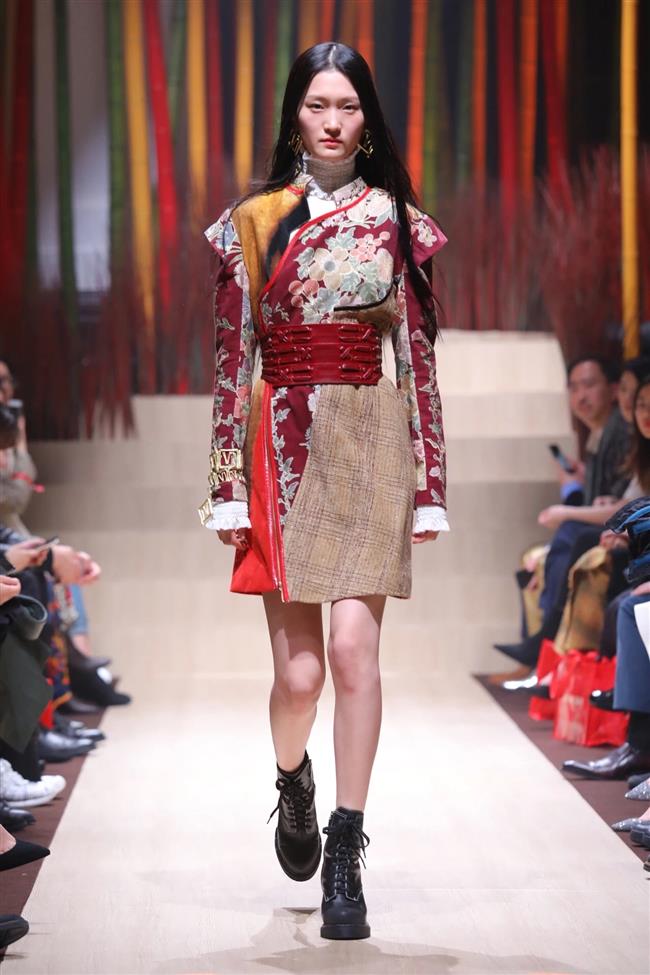 A: It is my first time to Shanghai Fashion Week. I only came for two days, but I am so excited about what I’ve seen. So much talent and energy!

Q: How many shows are you planning to see?

A: As many as I can squeeze in.

Q: Which brands have impressed you so far?

A: The list is quite long. We got Ximonlee, which I’m super excited about. We got Awaylee. I’m also excited about things that come up from Shushu/Tong, which we already stock, so we nicely seized the common ground to cooperate. We saw Susan Fang yesterday, which I think is amazing. There’s other brand like Sirloin that we missed today but I can’t wait to see in the show room.

Q: Your favorite designer at Mode?

A: My absolute favorite designer is Huajia, for I think what she is doing is incredible. The way she combines the fabric is interesting and different. And I really want to follow some of the young graduates as well. They are phenomenal and can boost the future of China.

Q: Have you purchased anything from other Chinese designers?

A: Yes. We already stock Shushu/Tong, and we also have fine jewelry designer Xiao Wang, and then we have i-am-chen, whom we found through fashion scout. But from what we hear, there is so much talent here. So, I think I need to come and see it in its own environment.

Q: How do you price Chinese designer brands?

A: For me, I think we set the retail prices in China in the same way as everything needs to be set roughly in the same level. From the brand’s perspective, price is not the most important thing. It’s the design that matters most. Maybe we can sell things at a lower price, but we are still most interested in the luxurious side. So, it is about the tailoring, the feel and fit of a garment to decide whether it’s affordable or not. 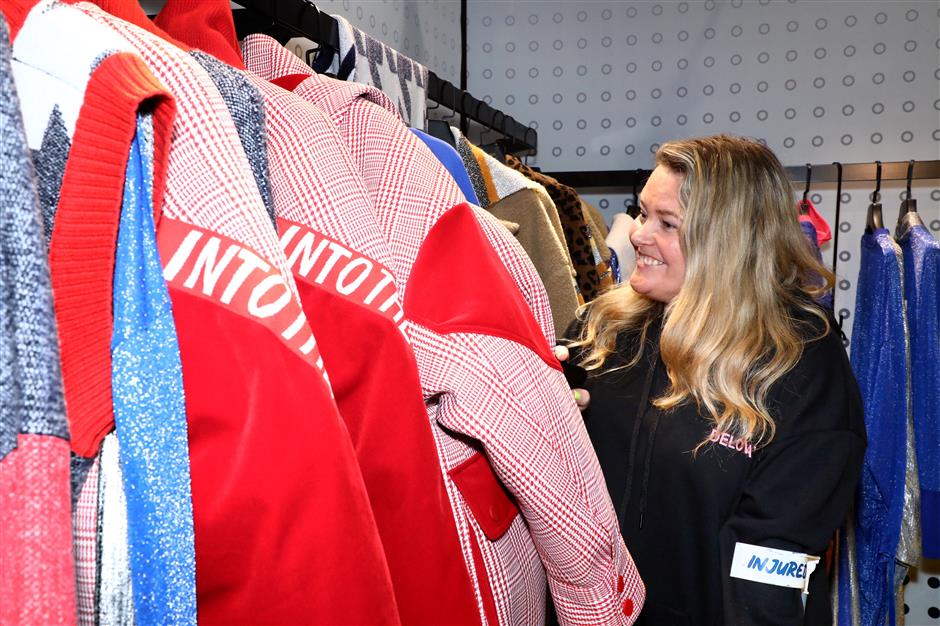 Q: Are there any fashion designers or brands that have interested you during the fashion show?

A: For this year’s fashion show, I think Caroline Hu’s design is really new, and Shuting Qiu, who is still at school studying, but I like her work a lot. There are some great designers who are just in show rooms but not doing shows. So, you can find a lot of fashion designers everywhere.

Q: Will you wear clothes designed by Chinese designers back in London?

A: I am wearing Shushu/Tong now, I also like Ms Min a lot, I do wear quite a few designs of them.

Q: From your observation, how do people from London or other parts of the world embrace Chinese brands? 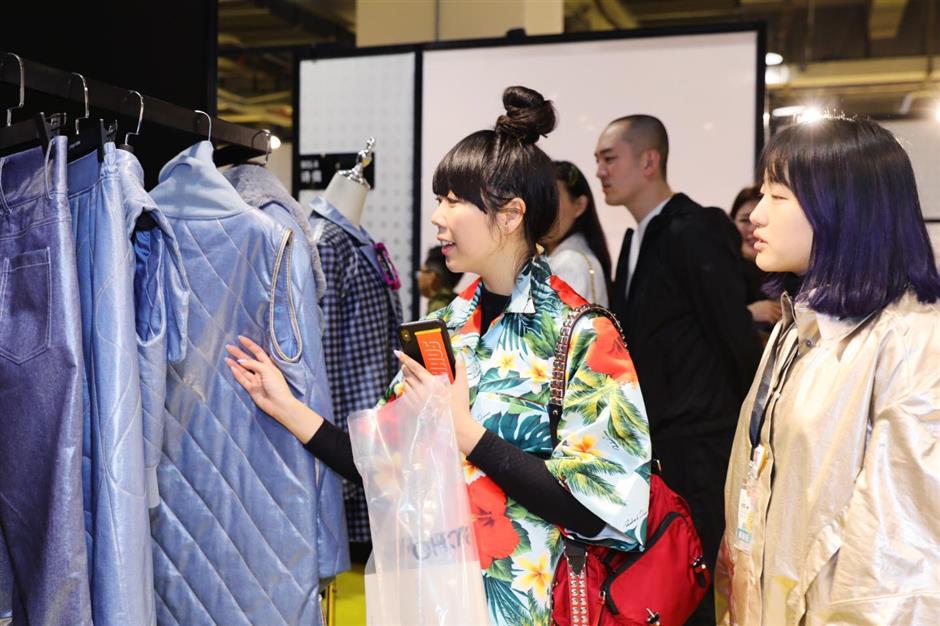