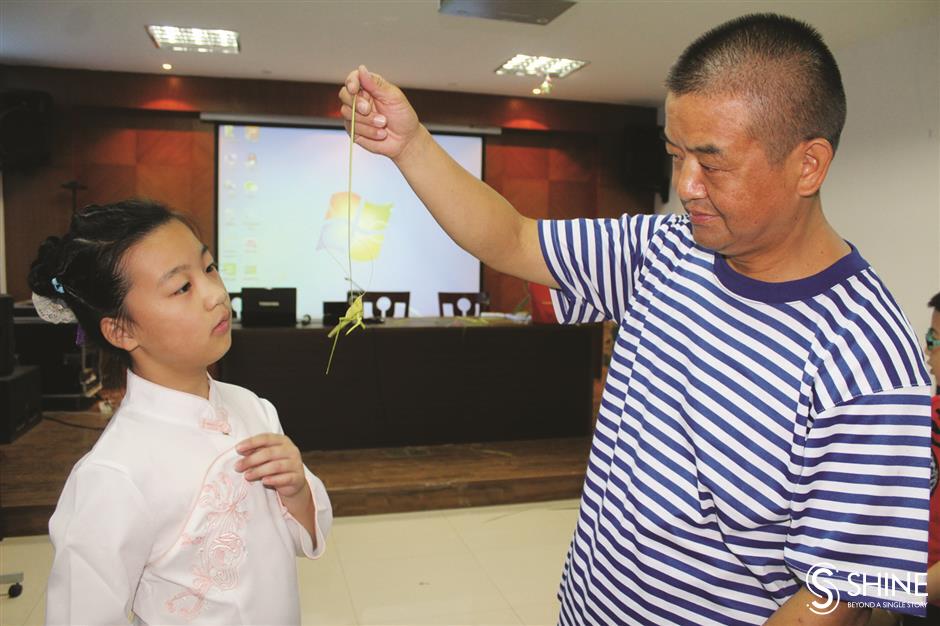 Xu Guangmin shows one of his young students a finished palm weaved grasshopper. 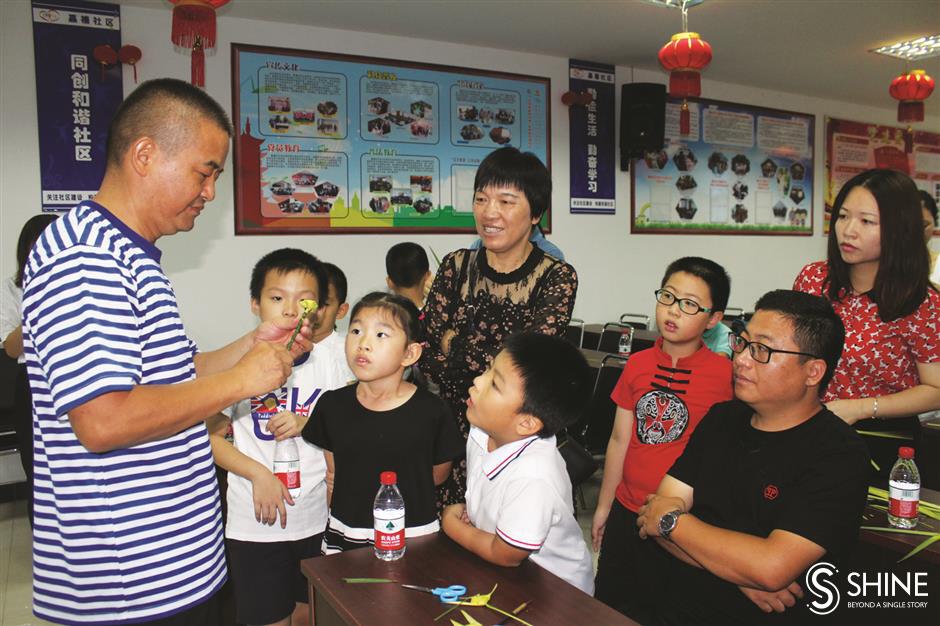 Xu shows his palm leaf weaving skills to his child and adult students at the Jiaxi neighborhood committee. 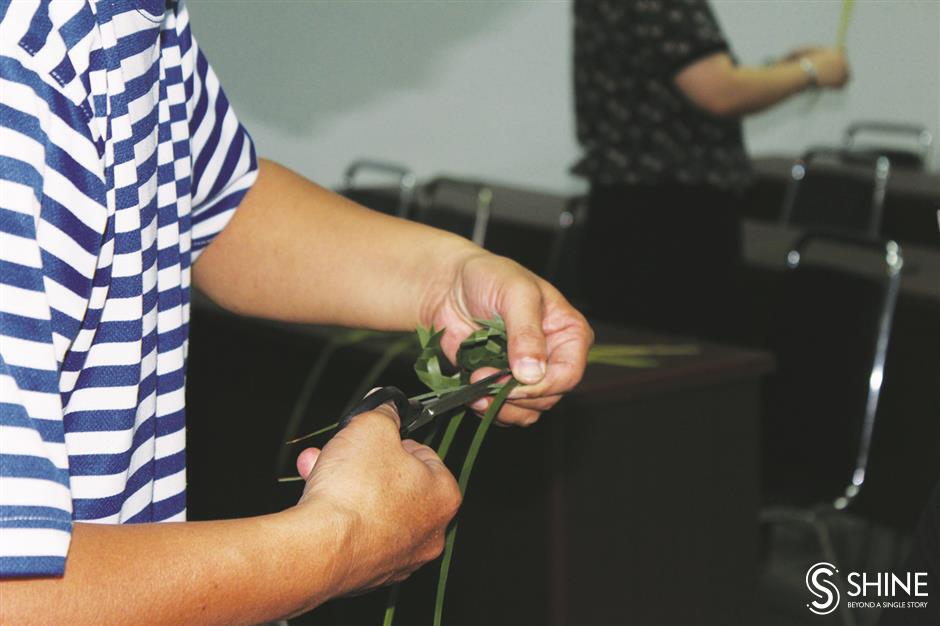 Xu Guangmin holds his Papa Palm Leaf Weaving Classroom at the Jiaxi neighborhood committee in Jiading every Sunday. The event was initiated by Xu as a bridge to bring home, school and community education together.

Children in the neighborhood were the first attracted to the event, then they brought their friends. The numbers expanded further as parents and grandparents also took an interest.

On the last day of the Mid-Autumn Festival holiday the doors of the Papa Palm Leaf Weaving Classroom opened once again for children and adults.

There was a red plastic barrel filled with fresh palm leaves, and rows of enameled finished works in the form of animals such as dragons, turtles and cicadas were displayed on a desk.

“The fresh palm leaves were cut from palm trees in the yard of my workplace,” said Xu, an official in charge of internal work and field operations at Shanghai Railway Bureau’s Nanxiang branch. “I also make sure the leaf resources are sustainable by cutting just enough leaves each time.”

Xu was going to teach his students how to weave roses and bookmarks in the shape of a flat fish this time. He tore a wide leaf into strips and used techniques such as folding, weaving, knotting and buckling to make one in just a few minutes, intriguing both children and adults alike.

In spite of his incredible skills, Xu said his aspiration lay not in becoming a palm leaf weaving expert, but in showing companionship to his 10-year-old daughter Xinyi.

Father and daughter took a tour around suburban Qingpu District in 2017 and happened to meet a palm leaf weaving craftsman selling his work at the roadside.

Xinyi, who was instantly struck by the delicacy of the works, begged her father to buy one for her.

Xu asked his daughter to choose one but she couldn’t make up her mind which one she liked best.

Seeing his daughter’s hesitation, it occurred to Xu that they could learn the craft for themselves and make as many works as they wished.

Every night since then, after Xinyi went to sleep, Xu taught himself the skill through online courses or consulted braiding artists via WeChat.

At the beginning, a simple frog could take Xu more than a month to finish. But after he mastered the basic skills, he could easily weave leaves in the shape of grasshoppers, snakes and spiders.

Xinyi also started to learn and the numerous items made by father and daughter are a record of the time they spent together.

“My daughter turned more confident through learning palm leaf weaving as she also needed to demonstrate the skill to other children,” said Xu.

Xinyi, a shy child at first, succeeded with her speech in her election campaign to become a Chinese Young Pioneer battalion chief, owing much to the confidence she built through palm leaf weaving and the love and support of her father.

Her teachers at Fengbang Primary School invited Xu to teach palm leaf weaving to the students.

“Papa Xu, the palm leaf weaved rose you taught me last time, I made a bunch of them on my mother’s birthday. My mum burst into happy tears while holding the bunch of green roses,” said one student.

“Papa Xu, I made 29 palm grasshoppers as Children’s Day gifts for my classmates. My parents helped me and we worked till 10 o’clock in the evening. But I felt it worth the effort,” said another.

“Children often behave well at school, but don’t act the same way at home. School, family and community education is like three divergent railroads that matter nothing to each other. What I’m trying to do is to connect the three and see how the combination will impact children,” said Xu.

In December 2017, Xu was awarded the “Shanghai Wise Parent” prize by the Shanghai Academy of Educational Sciences.

“I am 54 years old and my daughter is 10. Sometimes her classmates misunderstand me as her grandfather. My daughter used to feel confused by the age gap, too. And I tried my best to build up her confidence. Now, if asked to choose a younger father or the father she has now, my daughter would proudly say she would choose the latter,” said Xu. 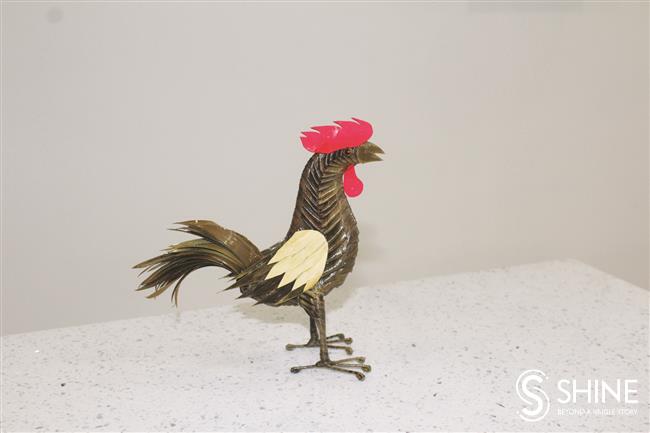 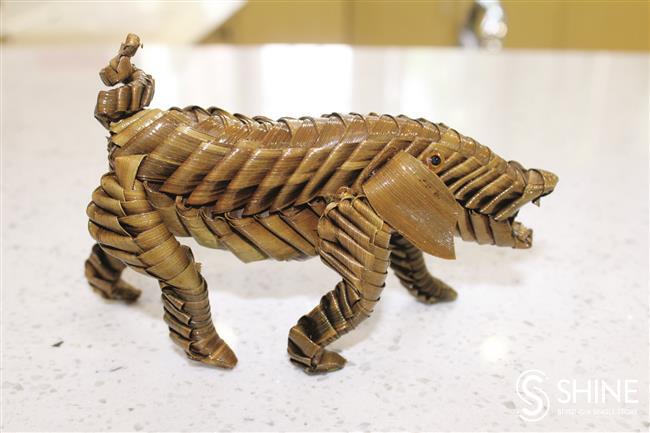 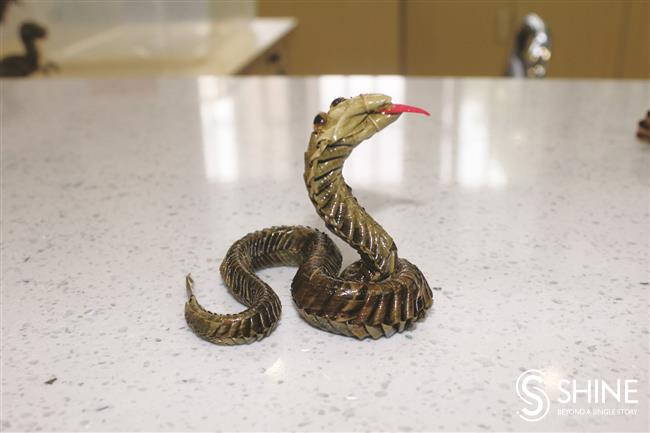 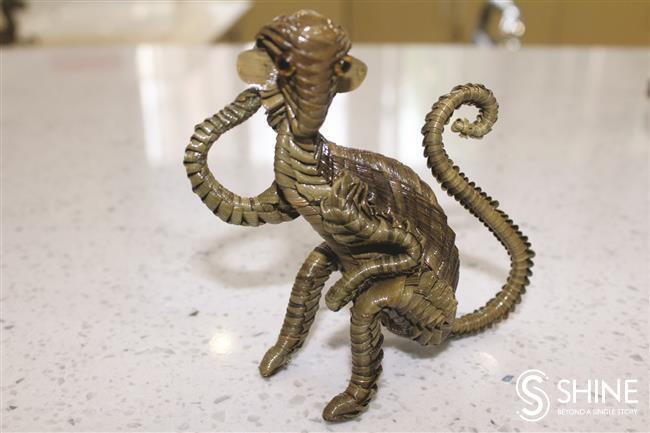 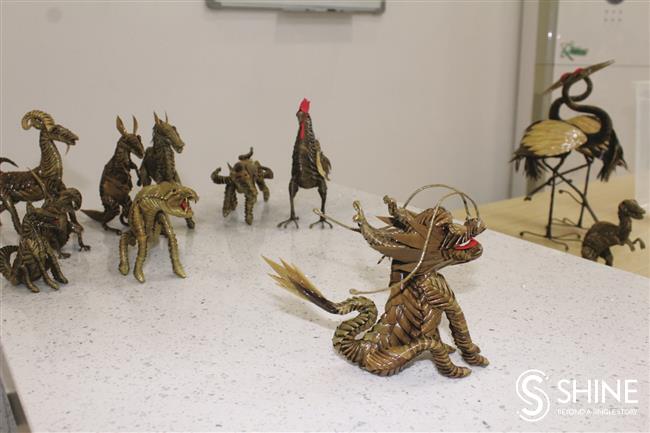 Various palm leaf weaved works in the shapes of different animals made by Xu, father of a 10-year-old

Special Reports
ADVERTISEMENT
61763
,
Grandparents-turned-fashionistas become #Instafamous
Trendy shops add fresh vitality to historic street
Charity exhibition redefines the meaning of home
Get animated at the CCG Expo 2020 in Shanghai
Keeping the 'eyes on the street' wide open
Living better by learning more about death
If it looks like a duck and quacks like a duck, it may be a pet
Master chef cooks up a taste for classics
Check out Yuyuan Garden delights on a budget
Meme's the word: How Eggman struck a chord
EXPLORE SHINE