It’s always comforting to be warmly greeted by well-trained volunteers whenever you need assistance in direction or language at the National Exhibition and Convention Center. The guides, or marshals, helping the China International Import Expo run smoothly, have been given a nickname “little leaves” — small but important.

Some 6,300 volunteers are serving the ongoing CIIE, with over 4,000 based inside the convention center. About one of every five volunteered for last year’s expo.

The majority of the volunteers are Chinese students from 38 local universities and colleges. The rest were recruited from other provinces, as well as students from Hong Kong and foreign scholars studying in Shanghai. 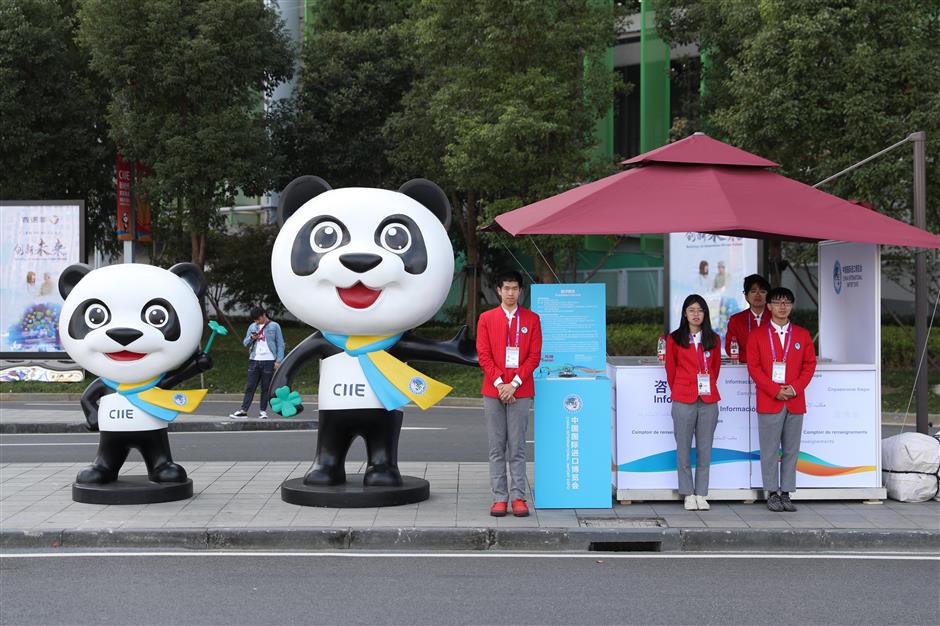 The CIIE volunteers, helping the expo going smoothly, are given the nickname of “little leaves” — small but important. 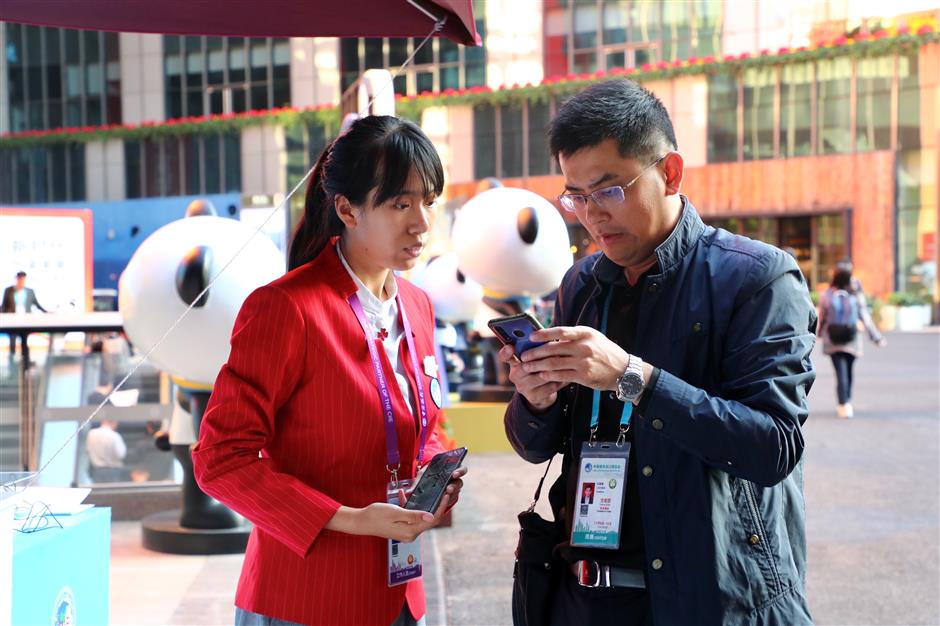 Some 6,300 volunteers are serving the ongoing China International Import Expo.

Aime Gilles Prosper Bouiti Viaudo, who goes by Gilles, from the Democratic Republic of the Congo, is based at the CIIE media center information desk.

Gilles is a sophomore of Donghua University, majoring in architecture and environment. He is better known by his Chinese name Yang Shan, who led the vow during the volunteers’ motivation ceremony.

“I learned Chinese for three semesters after arriving in Shanghai. After knowing about the opportunity (of becoming a CIIE volunteer), I applied for it and received full support from the university,” Gilles said.

His working shift is from 1:30pm to 5:30pm, and his major duty is to give directions and provide other CIIE-related information to visitors, especially those speaking French.

“I have done voluntary work for the university library before, and this is my first service for an international convention,” he said.

“The greeting etiquette of different nations is what we need to pay attention to during work. People from certain countries don’t have the habit of shaking hands. Also, there are certain words we should avoid when talking to people.” 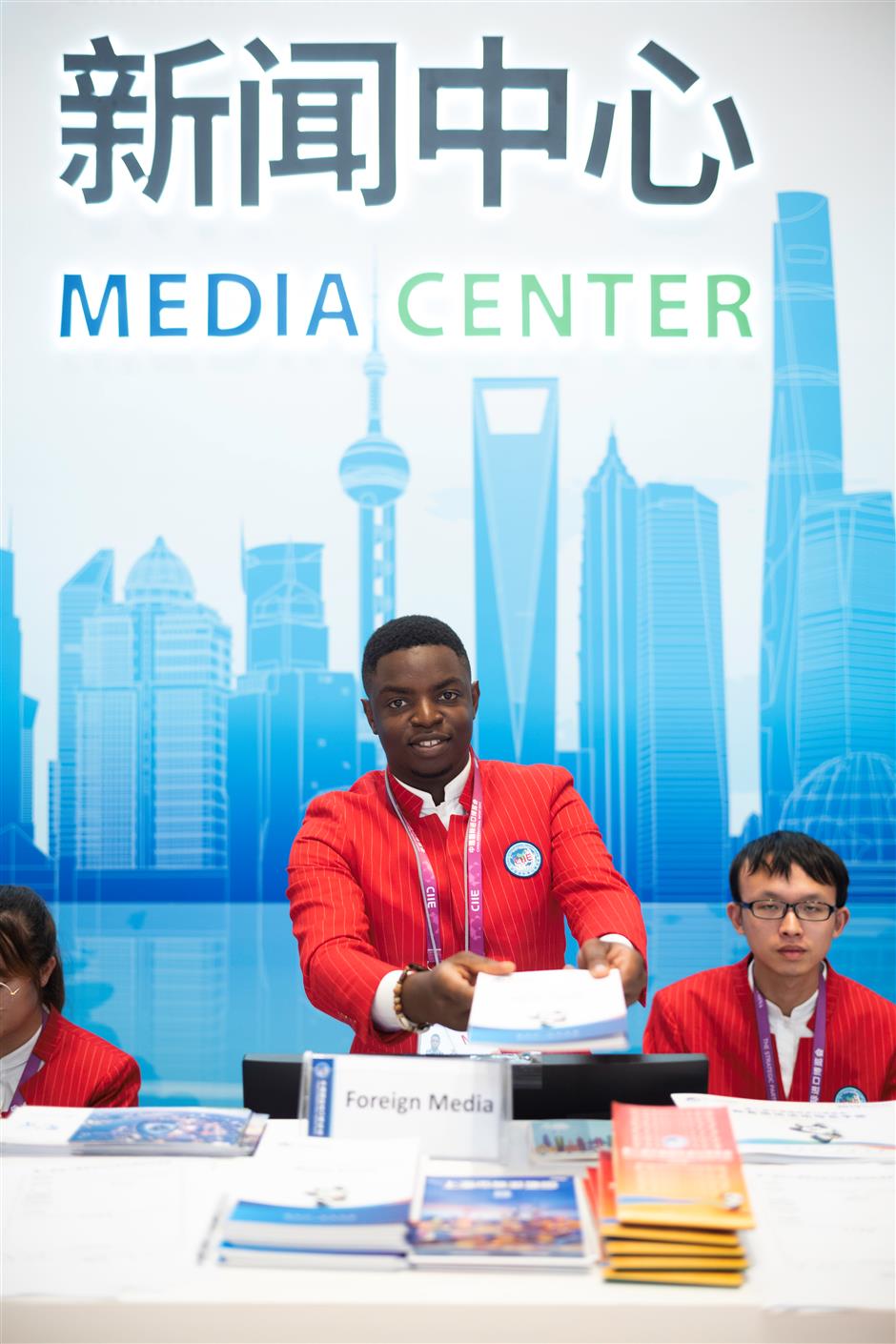 “I consider myself very lucky to be part of the CIIE,” said Dalaijargal, who is able to provide a service in Mongolian, English, Russian and Korean. “This is my first international convention experience too. It’s eye-opening since I get to meet a lot of people from various countries and cultures.”

Dalaijargal said she has received a lot of help and assistance from teachers and students at school since all lessons were given in Chinese.

“I always wanted to do something in return to all the help we foreign students received. This is a great chance for us to serve as the bridge between my country and China,” she said. 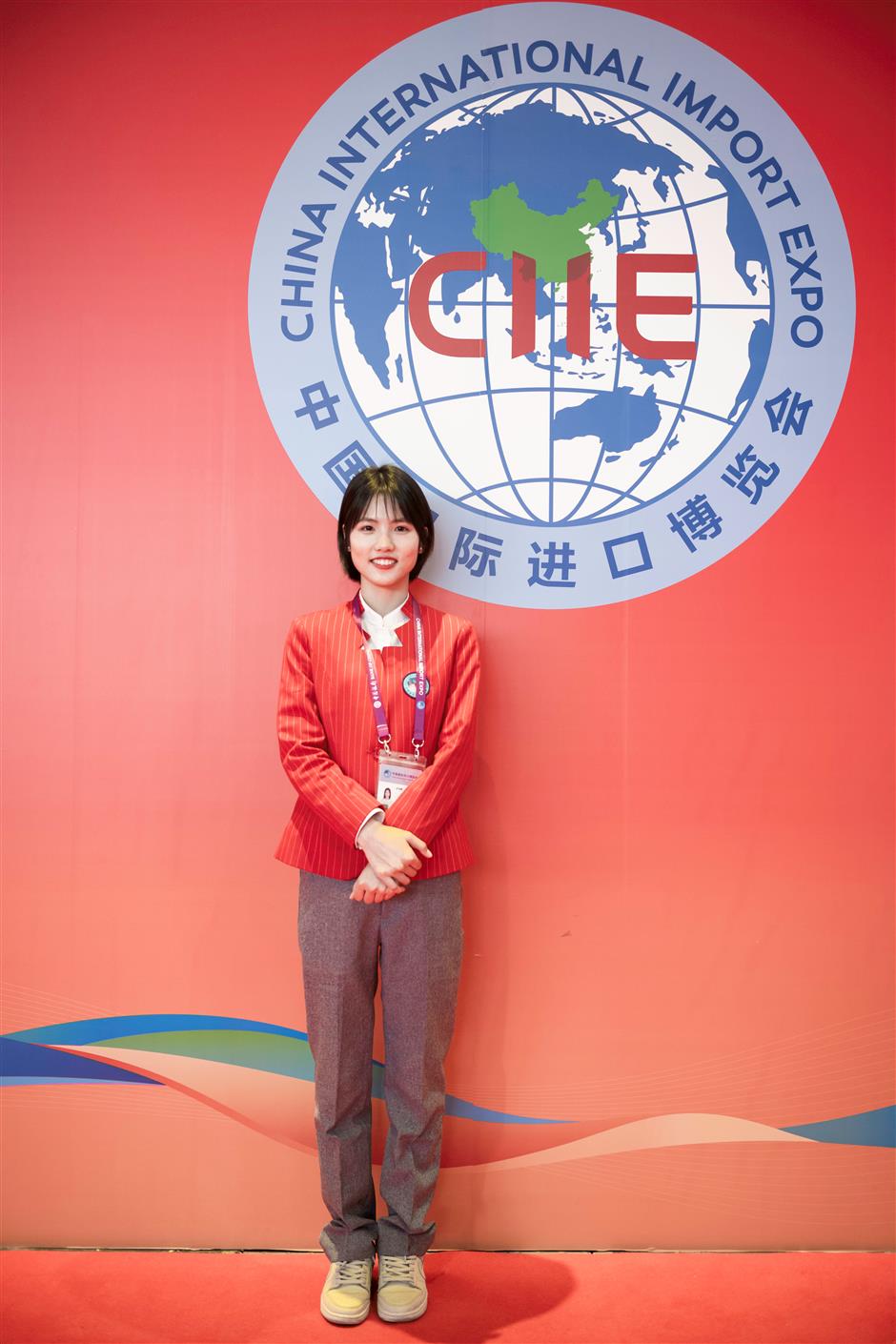 Zhao Shiqing, volunteer from the school of foreign language, East China University of Sciene and Technology

The Shanghai Youth League, which is in charge of CIIE volunteer recruitment, revealed nearly 150 volunteers are able to talk to foreign guests who don’t speak English or Chinese. Among them, five students from southern Yunnan Province, who are able to provide a service in Thai, Burmese, Lao and Cambodian. 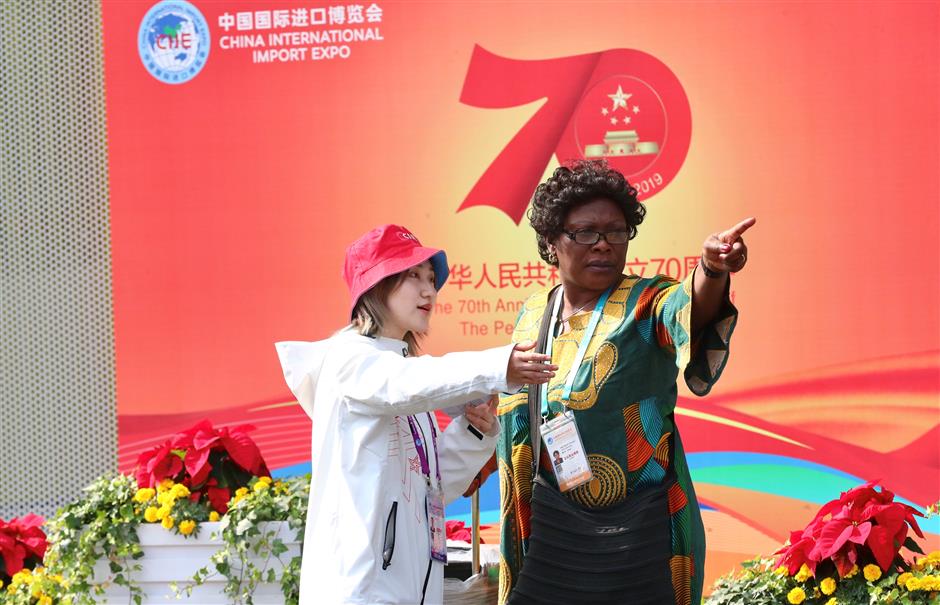 The Shanghai Youth League, which is in charge of CIIE volunteer recruitment, revealed nearly 150 volunteers are able to talk to foreign guests who don’t speak English or Chinese.

“Thailand is one of the guest of honor countries at this year’s expo, which makes me feel extremely responsible about my duty,” said Wang Jing, a postgraduate student of Yunnan Minzu University.

Wang went through three rounds of school and province-level tests and interviews before eventually becoming a CIIE volunteer. Previously, she had volunteering experiences at China-South Asia Expo and national tennis tournaments.

“I already knew a lot about CIIE since its inaugural edition,” Wang said.

“In our Thai classes, we were given CIIE-related materials for translation practice. Therefore, when I saw the recruitment notice for the second CIIE, I applied immediately.”

Wang and her four schoolmates arrived in Shanghai one week ahead of the expo.

Apart from getting familiar with the venue, they received training in CIIE knowledge, service regulation, garbage sorting, emergency dealing, as well as basic knowledge of the Belt and Road countries. The five girls are mainly based at the information desks in the venue.

“We were inexperienced in garbage sorting. During the first two days of our arrival, we observe and follow other local volunteers when disposing garbage. We are quick learners,” said Wang. 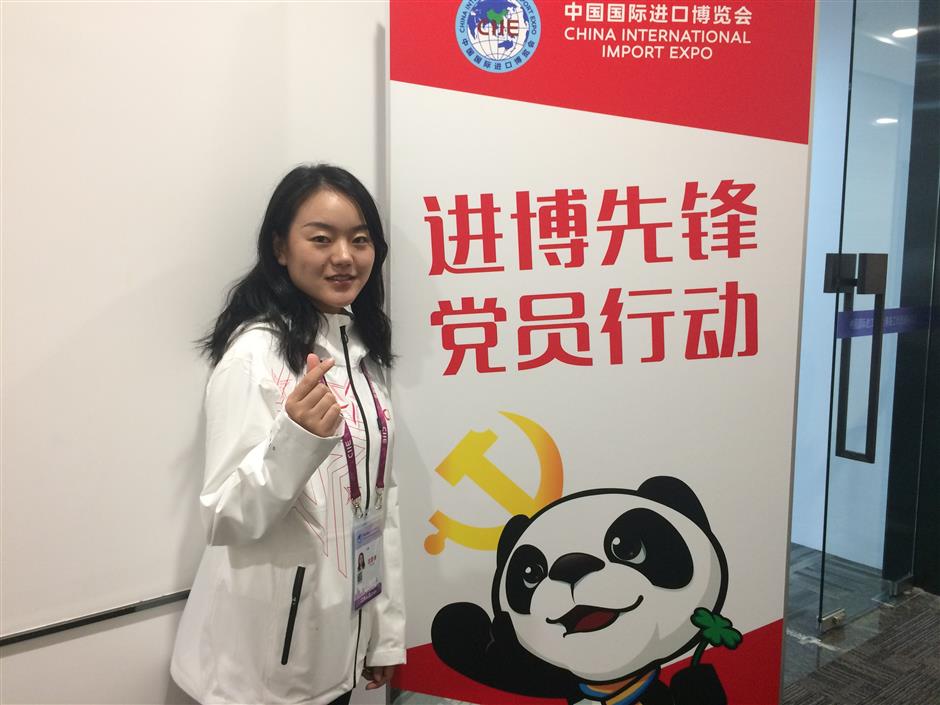 Zhang Jiaqi, an economics major postgraduate of Anhui University of Finance and Economics, is among the nine in-site volunteers from Anhui Province.

Zhang said they are more like “flexible firefighters” who are sent to places where extra volunteers are needed.

On the opening day of the CIIE, Zhang worked at one of the venue’s information desks in the morning. Then she was dispatched to help maintain the order of the crowd at forums in the afternoon.

“We got up as early as 3am on the opening day to avoid traffic restriction,” she said.

“On the rest of the days, we usually leave our dwelling place at Kunshan before 7am, and take a 40-minute bus ride to the venue. The work usually ends at 5:30pm or 6:30pm.”

The information desks are arranged at the hall junctions and passage intersections.

Most of the inquiries volunteers at the desks received are about the location and direction of a certain hall or the metro station. “We toured around the venue once during training, but that was actually not enough,” said Zhang. “To provide a better service to visitors, we took our rest time and walked around the halls to create a clear map of the venue in mind.”

“In the first two days, we met one foreign visitor who turned to us for help after finding that his phone was not working properly on a foreign land.”

“The rest of the questions were all about directions. It seems monotonous, but that’s exactly where the value of our job lies — we show patience and devotion, while getting ourselves ready for any possible situation,” she added

“Don’t forget that I major in economics, and I’m ready to put my economics knowledge into use at an import expo when needed.”

Volunteers based at the CIIE’s media center provide information and other help to journalists.

Volunteers are also providing service for the expo from their positions at the city’s two airports, metro and bus stations.

Don’t forget to reward the volunteers with smile or even give them a little encouragement when you see the “little leaves.”

There are doing an ordinary job with extraordinary attitude.

Special Reports
ADVERTISEMENT
61840
,
Guide for overseas Chinese students during COVID-19 pandemic
A cemetery that celebrates life and death
Nile threatened by waste, warming, dam
Enchanting abode in idyllic tranquility
Connecting nature, culture and people with design
Fancy footwork: An embroiderer finds her niche
How overseas Shanghainese go through outbreak
Counseling eases psychological toll of outbreak
'Support troops' guard the doors to the city
A guardian of the light ... and of hope for Wuhan
EXPLORE SHINE