Saving soles with kindness and dedication 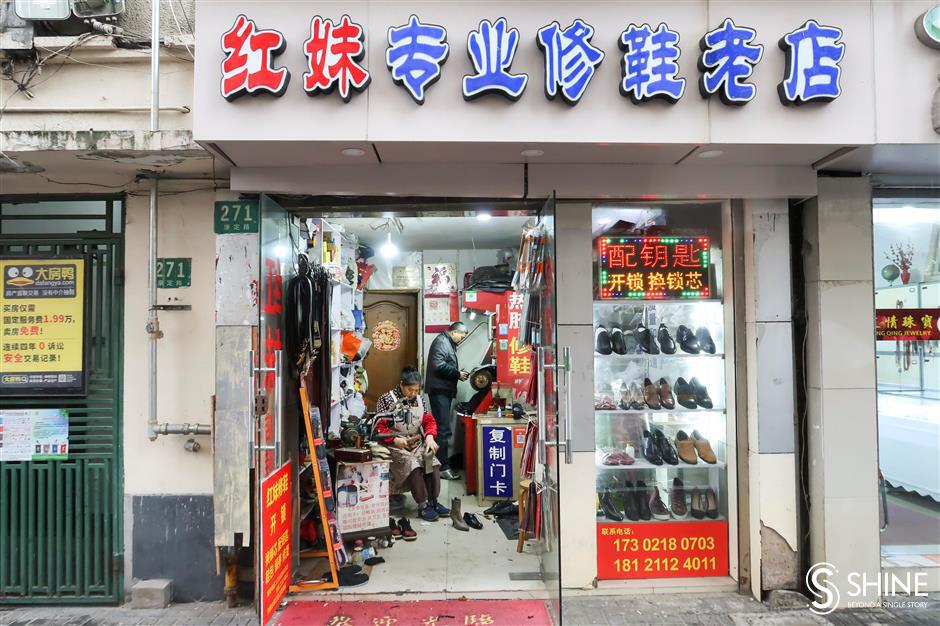 Zhao Hongmei’s small shoe repair shop is located at the gate of an old neighborhood on Kangding Road.

For the past 39 years, shoes have been the walk of life for 56-year-old Zhao Hongmei.

She has a small repair shop at the gate of an old neighborhood on Kangding Road in Jing’an District. It’s called Hongmei.

“Hongmei is the icon of Kangding Road,” said one of her customers.

Zhao and her husband Zhu Yuhua, childhood sweethearts from their hometown of Yangzhou in Jiangsu Province, also repair broken zippers and umbrellas, wash leather goods, sell belts and insoles, and make keys. They are part of an old tradition of local jacks-of-all-trades who provide valuable everyday services to neighborhoods.

About three years ago, I first saw Zhao on a television program called “Shejie,” which features the daily lives of people living in Shanghai. The video was filmed in Zhao’s old shop at the intersection of Kangding and Changhua roads. It has since been razed for road improvements.

I went to her current shop at 271 Kangding Road, where I found her repairing a pair of men’s waterproof boots while Zhu was applying paste to a sole.

“I was anxious when the video was being filmed because the old shop had to close for a neighborhood renewal project, and I couldn’t find a new location,” said Zhao. “I thought that I might have to say goodbye to the area.”

With the help of regular customers, she finally found a new location a mere four days before she had to move out of her premises.

“One day, a man purchasing a belt told me that the shop at No. 271 was available,” said Zhao. “The owner of the shop was also a customer of mine, and she was happy to rent the shop to me. I didn’t expect that.” 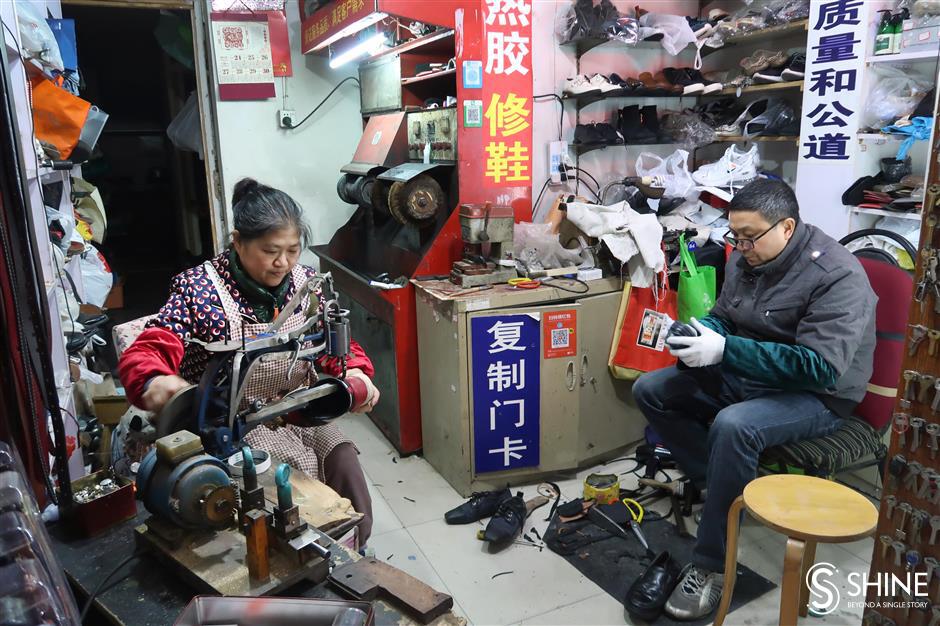 Zhao and her husband Zhu Yuhua run the repair store together.

At the beginning of my visit, she was a bit shy and surprised that I wanted to interview her at all. She said she didn’t see anything special about what she was doing, and that dedication to work and friendliness toward customers were just par for the course of any business.

The longer I lingered, the more the beautiful depths of this woman surfaced.

While I was there, a middle-aged man came to pick up a pair of repaired slippers. When he went to pay her, Zhao demurred.

“We have known each other for several decades,” said Zhao. “We are just like family members.”

A bit later, another man entered the shop seeking to have an umbrella repaired. Zhao examined the brolly, then told him that the repair would cost 10 yuan (US$1.43). Was the umbrella really worth fixing, she inquired. Yes, he wanted this umbrella repaired, so she agreed to fix it.

Zhao doesn’t charge anything until she completes an order. Her fees don’t change based on brand. A Louis Vuitton wallet costs 10 yuan to repair, the same as much cheaper brands.

Putting a slip resistant protector on the soles of luxury shoes costs about 120 yuan, depending on the material of the protectors. The price is less than half of that charged in more upmarket maintenance shops, according to the customers, who are mainly young women.

A number of high-end shoes bearing names like Hermes, Jimmy Choo, Roger Vivier and Chanel are neatly stored in a cabinet. Each pair is packaged separately.

“I once added protectors to the soles of a pair of shoes priced at 26,000 yuan,” said Zhao. “I was very nervous while working on them. However, I charged the customer the standard price.”

Thanks to social media, her shop has become rather more popular than might otherwise be expected. Customers come from other cities, and even countries, to have items repaired. Some send goods to Zhao via express delivery and communicate with her on WeChat.

She and her husband have become proficient in using a translator app to deal with foreign customers.

“In the past, our customers were mostly middle-aged and elderly residents living nearby,” said Zhao. “But nowadays, there are more young customers.”

Zhao mends a shoe with skills learned from almost four decades on the job.

When Zhao was 17, she followed her father, who was a shoe repairer, to Shanghai.

“I wanted to see what a metropolis looked like,” she said.

During her stay, Zhao learned shoe repair from him. Her father was a bit reluctant to teach her because he knew what a tough job it was, let alone how hard it was to make a living from it.

“However, I liked the city and didn’t want to leave,” said Zhao.

In her first 24 years as a shoe repairer, she worked outdoors, braving the heat of summer and the cold of winter. She was always looking over her shoulders for urban management authorities who would order her away.

She worked from 8am to 10pm, seven days a week. She said, in jest, that she and her husband were the last people who needed their shoes repaired because they seldom went anywhere.

The years of work have taken their toll on Zhao. She suffers from eye problems and cervical pain.

“Since my eyes are not so good anymore, my husband works on the expensive shoes,” said Zhao. “But we will carry on. There are fewer craftsmen repairing shoes in the city anymore. Our customers need us.”

Many elderly residents of the community congregate at her shop to chat with friends. Many passers-by come into the shop seeking change because there’s a bus stop out front. What’s more, the shop acts as a mailroom to receive and send parcels for locals.

“This street has borne witness to my life, from a young woman to a grandmother,” said Zhao.

As I was about to leave, she handed me her business card. I took it from her heavily callused hands.