Keeping the 'eyes on the street' wide open

Archipelago Books, a modern new store on the West Bund, recently held opening ceremonies. Among the features catching my eye was an exhibition highlighting 10 people, 10 publishers and 130 books.

One of the displayed faces was that of Zhao Ming, owner of a small, dilapidated secondhand shop on Dinghai Road in Yangpu District.

His premises couldn’t be a starker contrast with Archipelago Books, which is housed in single-story architecture with gable roofs that resemble mountain layers, wood facade and gray walls.

Zhao’s shop is definitely more down market, but that doesn’t diminish the character of the venue or its owner. I wanted to meet him, but I had to time my arrival. The shop doesn’t open until 3pm.

Zhao, 46, is a native of Sichuan Province. Like many migrant workers from rural, more backward areas of China, he came to Shanghai in 1996 seeking better opportunities. In 2007, he opened a clothing shop on Aiguo Road. 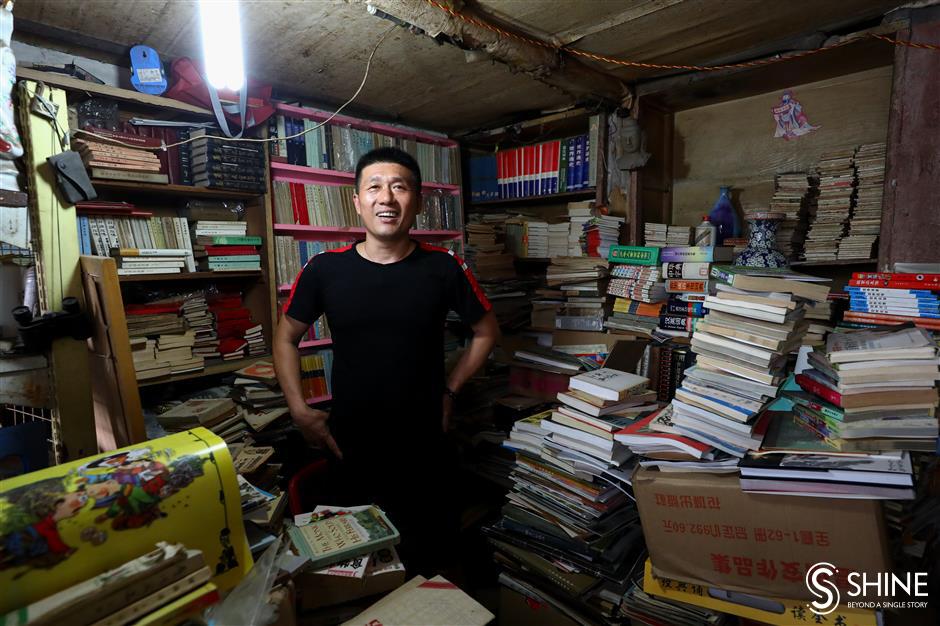 Zhao Ming, 46, operates his secondhand bookstore out of a small, shabby building in Yangpu District.

“Being on my own in Shanghai was a bit lonely,” says Zhao. “Luckily, books kept me company.”

Zhao is particularly fond of books on military history. When he was running his clothing shop, he would place books he had read on display in front of the store. Much to his surprise, many passers-by were attracted to the books.

“The book business was gradually overshadowing my clothing business,” he says. “That triggered my idea of opening a shop selling secondhand books.”

Driving on a rough road lined with old factories and houses being demolished, I admit I was shocked when I arrived at Zhao’s bookstore.

Although the little bookstore has no name, it is not difficult to find it. Tucked away in a dilapidated two-story house at 240 Dinghai Road, the shop is filled with books and old knick-knacks like purple clay teapots, statues of Buddha, beads and antique bronze hand warmers.

The store is so jammed with books that I barely have room to move. History, literature, art, fiction, the military and music, his secondhand stock covers a wide variety of subjects. However, finding a particular book may be like looking for a needle in a haystack. Piled on the ground with no classification system, the books are a jumble.

“Although the room can’t really hold more books, I keep them if someone sends them to me,” says Zhao. “I think I can find better homes for the books.”

Wu Feng, who works at Archipelago Books, shot video of Zhao’s shop for the exhibition.

“I couldn’t believe that there was a place like this in Shanghai,” says Wu. “The bookstore somehow seems so familiar to me.”

Wu, who is also a native of Sichuan, recalls his childhood in a hometown dotted with old establishments, like a teahouse and a grocery shop. Wu says that the owners and the residents all knew one another in what was a warm community environment.

“The owner of the grocery store was not fussed even when children pinched snacks without paying for them,” says Wu. “Zhao reminds me of the shop owners of my childhood, who didn’t care so much about making money.”

Piles of books are placed in front of Zhao’s bookstore. A board hanging on the front wall says: “Set your own price and make payment with a QR code.”

“It is okay even if people don’t pay,” says Zhao. “I once gave books free to local street cleaners. If the books expand knowledge, that’s all that matters.” 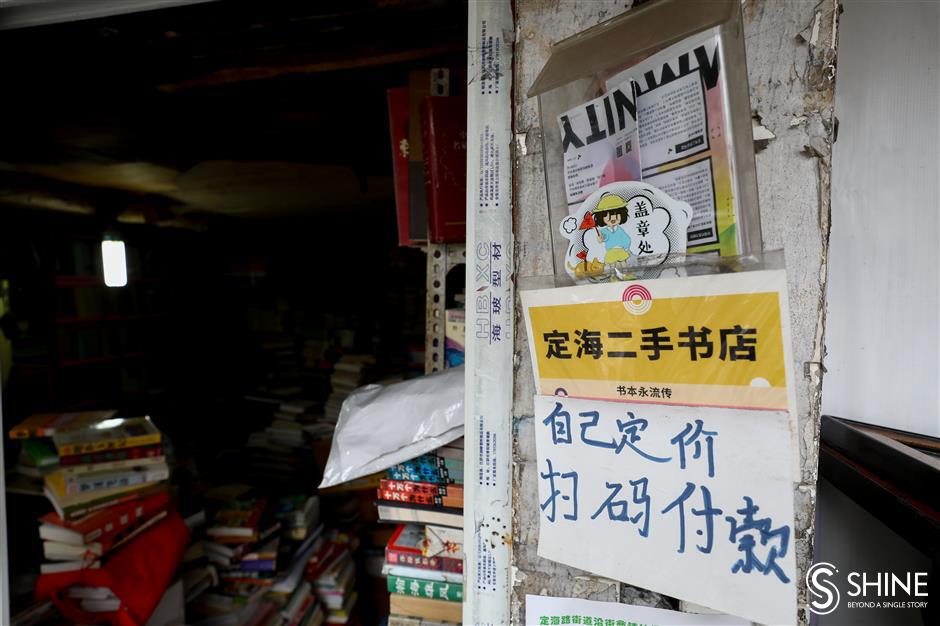 A notice tells customers they can set their own prices.

Two calligraphy works, inscribed by a person nicknamed “the man in white,” are pasted on a sliding door. One of them says: “Wisdom in hold, elegance in mold.” The other has characters referring to readers.

“The calligrapher borrowed painting and calligraphy books from me from time to time,” says Zhao. “I didn’t charge him, so he wrote two calligraphy works in return.”

According to Zhao, the book business was good in the first few years. Many young people came in to borrow novels, which cost them 5 to 10 yuan (US$0.70 to US$1.40) each time. However, as e-commerce began overshadowing bricks-and-mortar bookstores, business at Zhao’s bookstore started to ebb.

Struggling alone to survive in the new environment, Zhao began closing his bookstore in mornings and early afternoons in 2017 so he could work as a manual laborer at a food factory.

He now gets up at five in the morning and works at the factory from 6am to 2pm. After taking a short break, he often opens the bookstore at three in the afternoon.

“However, the physical work that I do in the daytime fatigues me,” he says, “and I lack the energy to sort the books.”

His shop is his home. Through a narrow passage with a stuffed book shelf and a small dining table is a small backroom where Zhao lives.

“My parents, wife and child still live in our hometown,” says Zhao. “I have to bear family responsibilities and financially support them. But I don’t want to give up the bookstore because it’s my spiritual home.”

He became a booklover without the benefit of even a high-school degree. Books, he says, teach him the principles of life and bring people together. His patrons include university professors, artists and retirees. 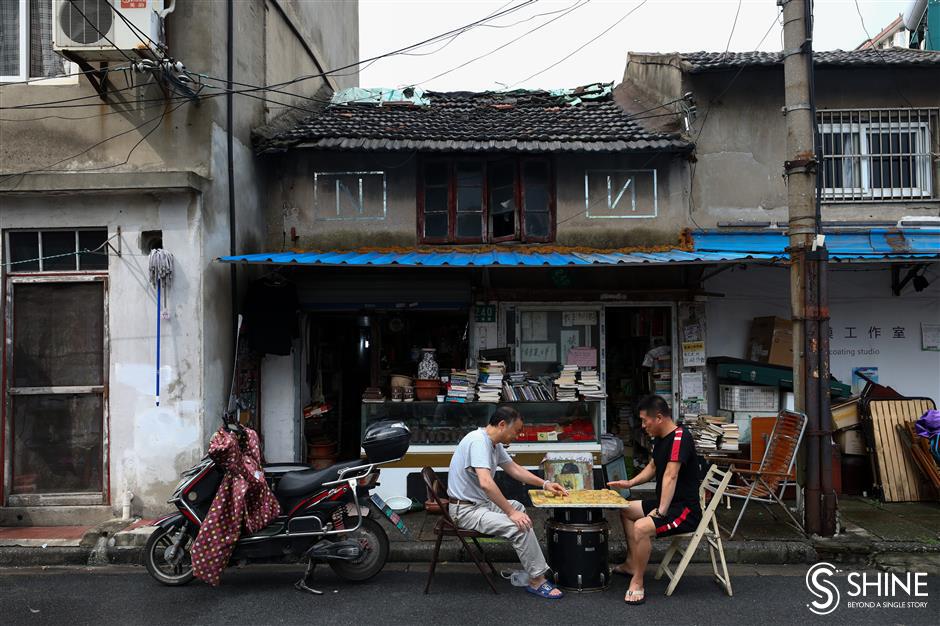 Zhao and a neighbor play chess in front of his bookstore most days. The shop has become a popular gathering place for locals.

As we are talking, an elderly man outside peers through the bookshop. At first, I assume he is a customer, but it turns out he is Zhao’s chess partner. They play chess every day. Having no table, the pair prop up the chess board on two old drums.

Two folding chairs and a deck chair are placed outside the shop. The seating is popular with residents and Zhao’s patrons, who like to congregate outside to chat with each other.

“Zhao’s bookstore reminds me of the concept that American-Canadian journalist Jane Jacob once referred to as ‘eyes on the street,’” says Wu.

He explains: “The bookstore is the eyes of the street, keeping watch on everyone’s movements and maintaining some degree of local security. Living in a metropolis can be lonely, but Zhao’s bookstore gives residents a sense of mutual connection.”

How long can he keep the “eyes” open? Zhao is not sure.

“This place will be demolished sooner or later,” says Zhao. “But as long as it stands, I’ll be here.”

﻿
Special Reports
ADVERTISEMENT
61838
,
Get animated at the CCG Expo 2020 in Shanghai
Keeping the 'eyes on the street' wide open
Living better by learning more about death
If it looks like a duck and quacks like a duck, it may be a pet
Master chef cooks up a taste for classics
Check out Yuyuan Garden delights on a budget
Meme's the word: How Eggman struck a chord
When the chirping stops, a market croaks
Vlog: Working behind the grill at Shanghai's famous night markets
Tutu the Cat
EXPLORE SHINE