In our continuing series of sensational summer wines, this week we'll delve into the uplifting and buoyant world of vino bubbles. Nothing quite so epitomizes the pure joy and celebratory nature of wines as a good sparkler. The story of sparkling wines begins in early 16th century southern France.

In 1531 or most likely a few years before, the pious and industrious monks of Saint Hilaire Abbey in Limoux made the world's first true sparkling wine by inducing a second fermentation in the bottle. This is over a century before Dom Perignon and the Benedictine monks of Champagne adopted and refined the process of second fermentation in the bottle that we now call the Champaign or traditional method. Centuries later two gents, one Italian the other French, invented a quicker and more efficient way to put tiny palate tickling bubbles into wines.

In 1895, Federico Martinotti, the director of the Research Institute for Enology in Asti, Piedmont designed and patented a method of controlled fermentation in large steel tanks. Building on this work, Frenchman Eugène Charmat built the first tanks in 1910. These early fermentation tanks evolved into the modern autoclaves used today. In Italy, many people patriotically still refer to the process as the Martinotti-Charmat method, but in most other countries it's simply called the Charmat method. 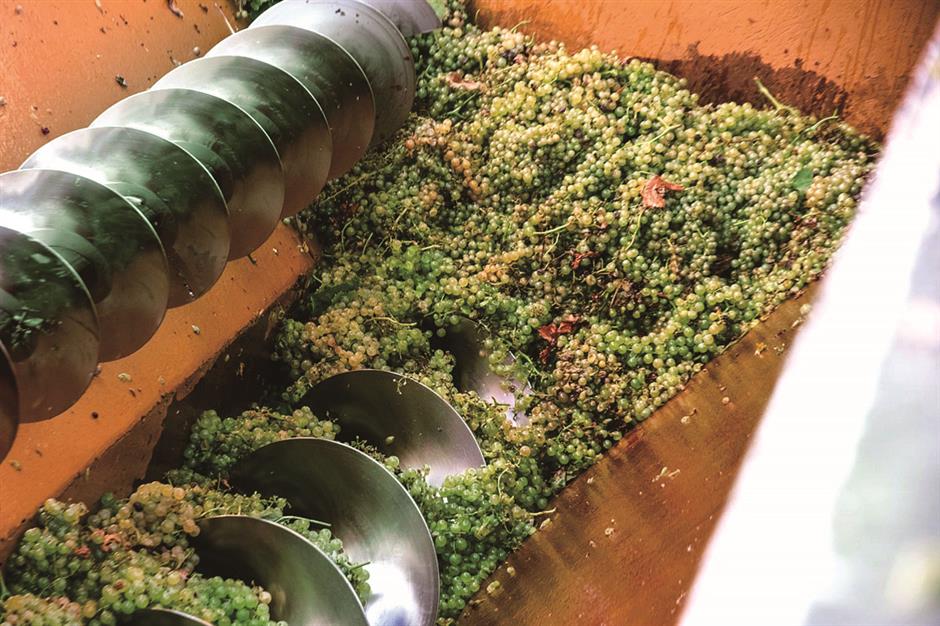 Glera grapes arrive at the winery.

Compared to the traditional method, the Charmat method is a far easier and less costly way to make sparkling wines. The resulting wines also tend to be more fruit-forward and friendlier. The most famous Charmat method wines are undoubtably Prosecco, the world's most popular sparkling wine.

One of the key factors in the growth of overall Prosecco DOC production and value per bottle is the new pink version of the wine.

In 2020, the final approval of Prosecco Rose was granted and 2019 vintage wines were released on the market. In the first year, 20 million bottles were produced followed by 50 million bottles in 2020. A remarkable 75 million bottles were produced last year. The major markets are not surprisingly the largest consumers of white Prosecco sparklers; namely, the United States, United Kingdom, the Nordic countries and continental Europe but these new pink beauties are also making some noise in Asia markets including China.

One reason why pink Prosecco wines have been so successful is a concerted effort toward premiumization. The Prosecco DOC regulations for making Rose wines are stricter than those for white sparklers with a minimum time of 60 days of second fermentation in the autoclaves as opposed to 30 days for normal Prosecco.

Prosecco Rose wines must be made with 85-90 percent Glera grapes and 10-15 percent Pinot Noir grapes and the wines have to have a minimum of 85 percent of the grapes from the declared vintage. The Rose sparklers can be classified in ascending levels of sweetness from brut nature, extra brut, brut to extra dry. In contrast to traditional Prosecco DOC wines; sweet, still or Frizzante versions are not allowed.

A number of perfectly lovely Prosecco Rose sparkling wines available in Shanghai and one of the best that I've tasted is the Cantina del Garda Prosecco Rose DOC Extra Dry, an elegantly light pink-orange colored wine with fine and persistent bubbles, a lively nose of strawberries and red current and a sophisticated textured palate offering juicy red fruit and black cherry flavors and an impressively long finish. The delicate balance between fruitiness and acidity is impressive.

Additional recommended Prosecco Rose wines available in our fair city are produced by Villa Sandi, Maschio, Zonin, Bottega and Bisol. This new category of wine is so promising that some surprising names including Tuscan producer Ruffino and Spanish CAVA giant Friexenet have also jumped on the bandwagon and are producing Prosecco Rose wines.

The fresh, vibrant and elegant nature of Prosecco Rose wines makes them exceedingly food-friendly. I recommend pairing them with all kinds of appetizers, pastas, pizzas and seafood. The additional structure in the wines due to the Pinot Noir contribution also makes these Rose sparklers ideal companions to white meats and even some red meats. I'm particularly fond of matching these wines with Cantonese-style BBQ meats and crispy-skin chicken.

Despite a minority contribution of age-worthy Pinot Noir grapes, the predominance of Glera in the blend means Prosecco Rose wines should be consumed relatively young or about two to three years after release. Serve these pink beauties well-chilled, about 6-8 degrees Celsius.

So as the challenging trial and tribulations of the first half 2022 are increasingly in the rear view mirror, we can appease the heat of summer and joyfully celebrate by tantalizing our palates with the refreshing pink bubbles of Prosecco DOC. You'll not only much feel cooler, but you'll also look the part.