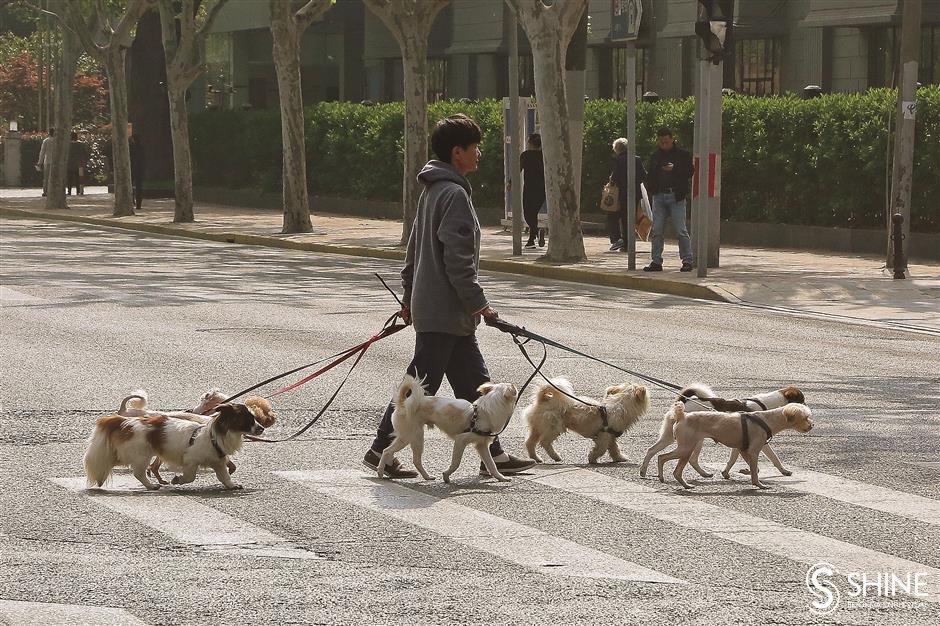 Local police are considering assigning color codes to registered dogs to indicate the level of compliance with pet regulations.

It’s not dogs who break laws, but rather negligent owners. Because of that, police are floating the idea of assigning color codes to registered dogs to indicate the level of compliance with pet regulations.

Shanghai police in 2019 fielded more than 3,800 reports about dogs being walked without leashes or muzzles and nearly 10,000 calls about illegal barking.

Under the proposal, a green code would indicate a dog that is being reared legally. Other codes would indicate that a pet owner is remiss and faces fines or obligatory education on pet care.

Park and greenbelt authorities would have the right to deny entry to pet owners who have refused to register their pets, who have flouted pet regulations or who have allowed their animals to behave badly.

The idea of a pet code brings a long-running debate between the dog lovers and non-dog lovers to the fore again.

Last September, a 6-year-old girl was skipping rope outdoors, with her mother nearby, when an unleashed Rottweiler threatened her in the Sheshan community in suburban Shanghai’s Songjiang District.

The mother ran to protect her daughter and was bitten by the dog on her leg, causing a 7-centimeter-long wound. The owner and the woman’s husband finally pulled the dog from her.

The dog was subsequently handed over to police. The dog owner promised to pay all the medical expenses.

About half a month earlier, a court in Anhui Province ruled in the case of a 10-year-old boy whose face had been bitten by a Chow Chow dog he was playing with while his parents were at a traditional Chinese medicine clinic. The dog was tied up at the time.

The boy’s parents argued during the trial that the dog wasn’t licensed, but the court said the parents bore prime responsibility for the incident.

Stories about people being hurt by dogs continue to raise public concerns about the risks of stray dogs and undisciplined pets.

City legislator Yu Guoqiang, who has been following the issue for several years, told Shanghai Daily that the local regulations pertaining to dogs need to be upgraded.

Last year, he made proposals to the Shanghai People's Congress and received a response. In a document he showed Shanghai Daily, police, agricultural and rural affairs commissions, urban management authorities and the market watchdog pledged to crack down on unlicensed dogs and on owners who allowed their dogs to contaminate the environment with their poop.

Authorities pledged that dogs who attack people will be sequestered and any injuries they inflict will received immediate medical attention.

After soliciting public feedback, authorities also proposed that stiffer penalties be imposed on negligent dog owners, and if that doesn’t work, the dogs will be seized.

In this year's Two Sessions, which ended yesterday, several local political advisers and legislators have proposed new rules on dogs and pet raising.

Members of the Shanghai Committee of the China National Democratic Construction Association, one of the nation’s eight non-Communist parties, filed a proposal on enhancing dog management to the Party’s Shanghai committee.

The proposal notes that regulations on dogs over the years haven’t been entirely successful, with many pet owners refusing to register animals or curtail their anti-social behavior.

Another possible impediment is the overlapping nature of agencies involved in dog control. The police issue and renew dog licenses and respond to calls about dog attacks or excessive barking. The livestock authority is in charge of immunizations. The market watchdog is responsible for the pet market, and the urban management authority regulates issues like dogs defecating on streets and owners walking dogs without a leash.

The proposal now on the table calls for setting up a unified online system covering all aspects of pet ownership as well as a clear set of penalties for those who violate the rules.

Among the new considerations are special garbage bins for pet poop, facilities to chain dogs in public areas, easier access for special dogs like guide dogs and volunteer work to support dog-keeping.

The Shanghai People’s Congress has also received proposals from individuals.

Gao Xiangdong, a political adviser who is Party secretary of East China Normal University's College of Economics and Management, said in his proposal that the “pet fever” trend has both benefits and drawbacks.

“Many families in Shanghai keep dogs at home,” Gao told Shanghai Daily. “Raising dogs can bring joy to owners and their families, but these dogs should be managed better. Sometimes they threaten the elderly or children neighbors, and their poop creates a public health risk.”

His proposal cites incidents of dogs hurting people, a high death rate from rabies, dogs running at random and the mess of dog poop in public places. It notes that some pets are improperly raised in areas like garages and that incessant barking disturbs people.

Gao said he thinks communities and neighborhood committees should take some responsibility for pet management. Special “restrooms” for pets should be established, making it easier for sanitation workers to collect the excretions and do disinfection.

Another political adviser Chen Xiangfeng, chairman of Shanghai Boxun Information Development Co, is proposing that more be done to address the problem of stray dogs.

He said dog owners, especially those refusing to get licenses, often abandon their pets.

His solution: Artificial intelligence should be introduced into dog registration and management so that dogs can be identified by “nose prints.” He also recommends that dog owners take training classes as part of the registration process and that pet-adoption organizations be further regulated.

Heavier penalties and higher fines should be meted out to dog owners who violate regulations, he said. “We want the whole society to pay more attention to this issue,” Chen told Shanghai Daily. “We feel that current government policies are not detailed and strong enough.”

The agenda included reviewing draft revisions to the Law on Animal Epidemic Prevention and the Administrative Penalty Law. The revisions make it clear that dogs being walked should be leashed and display their license tags.