The hot, sticky streets of the city on late-summer evenings are often soothed by buskers performing anything from the guitar and saxophone to the violin, accordion or even vocals.

Since the city granted the first eight licenses to buskers in 2014, the number of street performers has swelled to more than 300, with two-thirds of them young and well-educated. 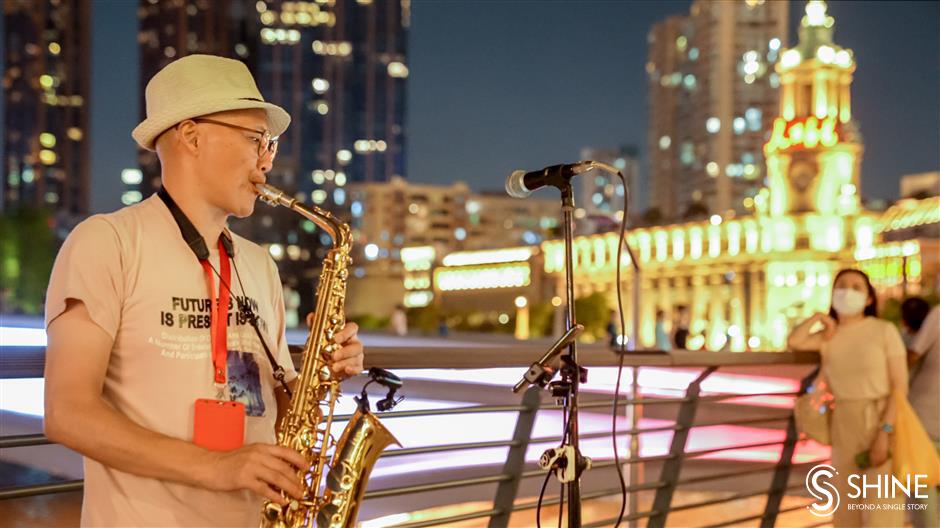 On a waterfront plaza between Garden Bridge and Zhapu Road Bridge, a busker plays the saxophone and Irish whistle in turns.

Busking started in Jing'an Park and has since expanded to 30-plus regular performing sites all over the city.

In addition to providing music for passers-by, usually in the hopes of receiving a small gratuity, some buskers are also accompanied by artisans making Chinese knot-knit items, cartoon portrait drawings or traditional handicrafts like paper-cuts.

Dong Yihan is a young busker who received a license in June. He plays the flute on streets and at Metro stations when not at his day job in the auto industry.

Dong studied in France and worked as a mechanical engineer at a French automobile company for years. In his free time there, he often participated in music festivals, playing traditional Chinese instruments like the bamboo flute, which is believed to be the oldest woodwind in China.

"When I was on the stage, I didn't see the audience clearly because of the spotlights," Dong said. "But as a busker, I had to learn to handle the pressure of facing listeners close up."

He added, "Busking is my part-time job. I don't care that much if it can make money or not. What's important is the sharing aspect of music and the opportunity to present its traditional Chinese facets."

He said he envisions a future where street performances will become a permanent part of the cityscape. 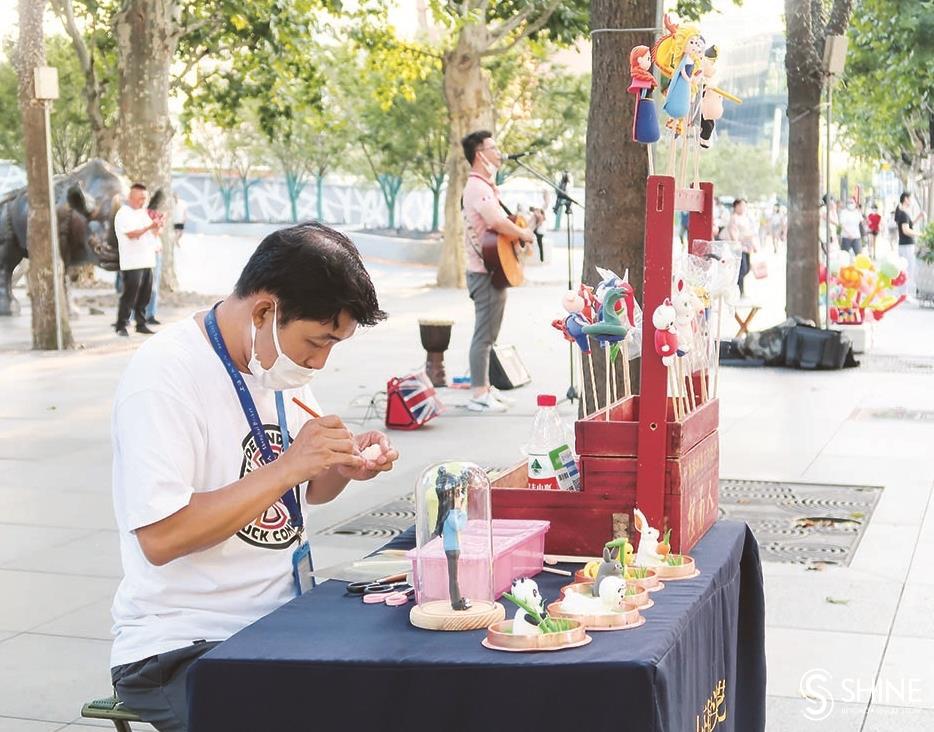 A busker makes a dough figurine, one of China's intangible cultural heritage at Jing'an Park.

Another busker is singer Fu Zhuo, who migrated to Shanghai with his family from northeastern China when he was 6. He was studying for a master's degree in media and communications at the University of Westminster in Britain, but he returned to Shanghai when the coronavirus pandemic broke out.

"My heart is all about music," Fu said. "I used to see buskers near the Super Brand Mall at Lujiazui and admired their courage."

He said he sang on the streets of London, Manchester and Leicester while in the UK. He sang songs in English, except if he saw Chinese passers-by, when he would switch to Chinese songs.

"I could see them smile and feel their joy at hearing music in their mother tongue in a foreign land," he said.

When Fu returned to China, he saw information about busker licenses on WeChat and applied for one.

"In the UK, buskers don't need a license, so that the management of street performers there is loose," he said. "But in Shanghai, we have order."

Indeed, to get and keep a license, buskers are banned from setting a price for performances or selling any products. They are prohibited from begging or disturbing people. They must be neatly dressed and stick to their designated performance sites. And, of course, they must observe all coronavirus-prevention rules.

Fu said the Shanghai Performance Arts Association safeguards the rights and interests of every busker and gives street performers the same dignity as other performers." 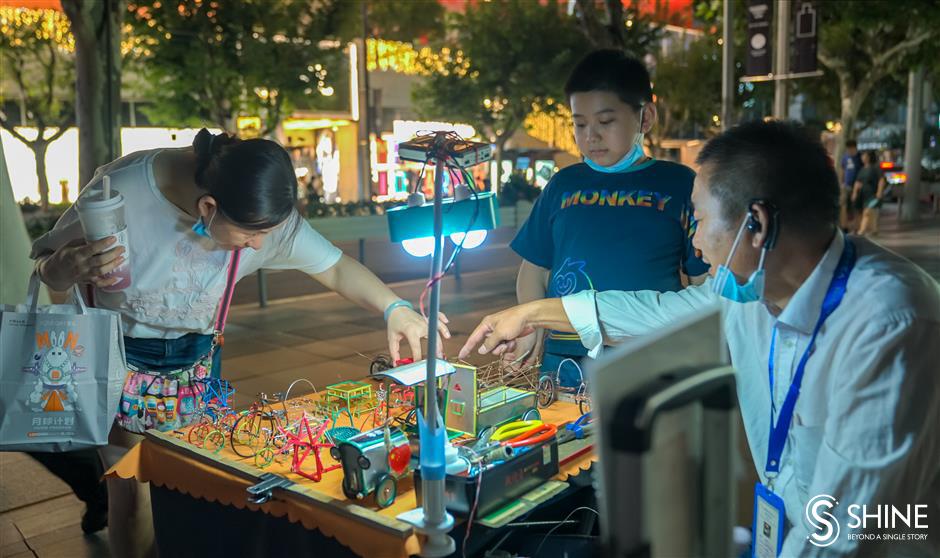 Chen Chaoyou, an iron-wire artist and also a busker, shows his wares to passers-by while two other buskers sing nearby in front of Jing'an Park.

Hua Jun, director of the association's special committee for buskers, started to busk in Shanghai with his saxophone six years ago, before taking up more administrative duties.

"Now we have many more buskers and performance sites," he said. "Every day we work hard to match buskers with appropriate locations to perform."

"We are not only street performers, but also performers representing the city," he said.

On Monday night, two buskers were singing in front of Jing'an Park. Chen Chaoyou, an iron-wire artist and also a busker, was making artworks alongside them.

Wang Wang, a lawyer, was captivated by the songs after doing exercises in the park and began dancing to the rhythm of the music.

She told Shanghai Daily that their songs made her feel relaxed.

"When I do exercises, I still have thoughts about work and life in my head," she said. "But when listening to the songs, I totally forget all that."

Wang said Shanghai is like Paris, London and other big cities in the world where street life is enlivened by performers.

"They bring joy to passers-by," she said. 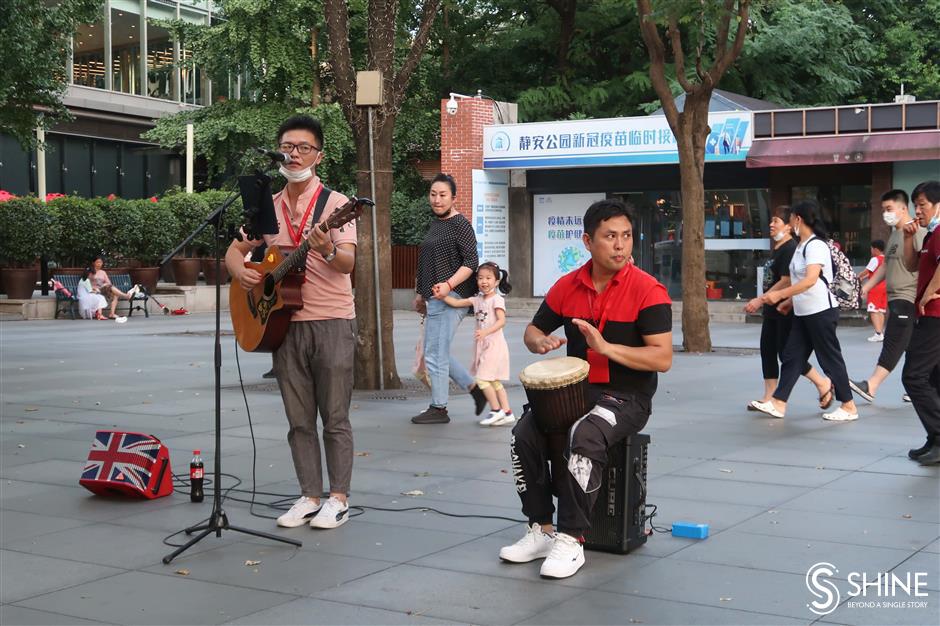 "It took him many hours to make it," the boy said, marveling at the work's intricacy.

One night in a small waterfront plaza between Garden Bridge and Zhapu Road Bridge, a busker played the saxophone and Irish whistle in turns. The music slowly attracted a gathering of people, who listened and took photos and videos.

Aleksandr Skripkin, a 28-year-old Russian who has lived in Shanghai for almost four years, was among the admiring crowd.

"I think this is good for the city and for local people," he said. "It created such an inviting atmosphere when a friend and I were standing on that bridge and listening. Nowadays, you can listen to anything online, but listening in real life is so much better."

Wei Zhi, head of the Shanghai Performance Arts Association, said the buskers are no longer just street performers, but rather urban artists going from strength to strength.