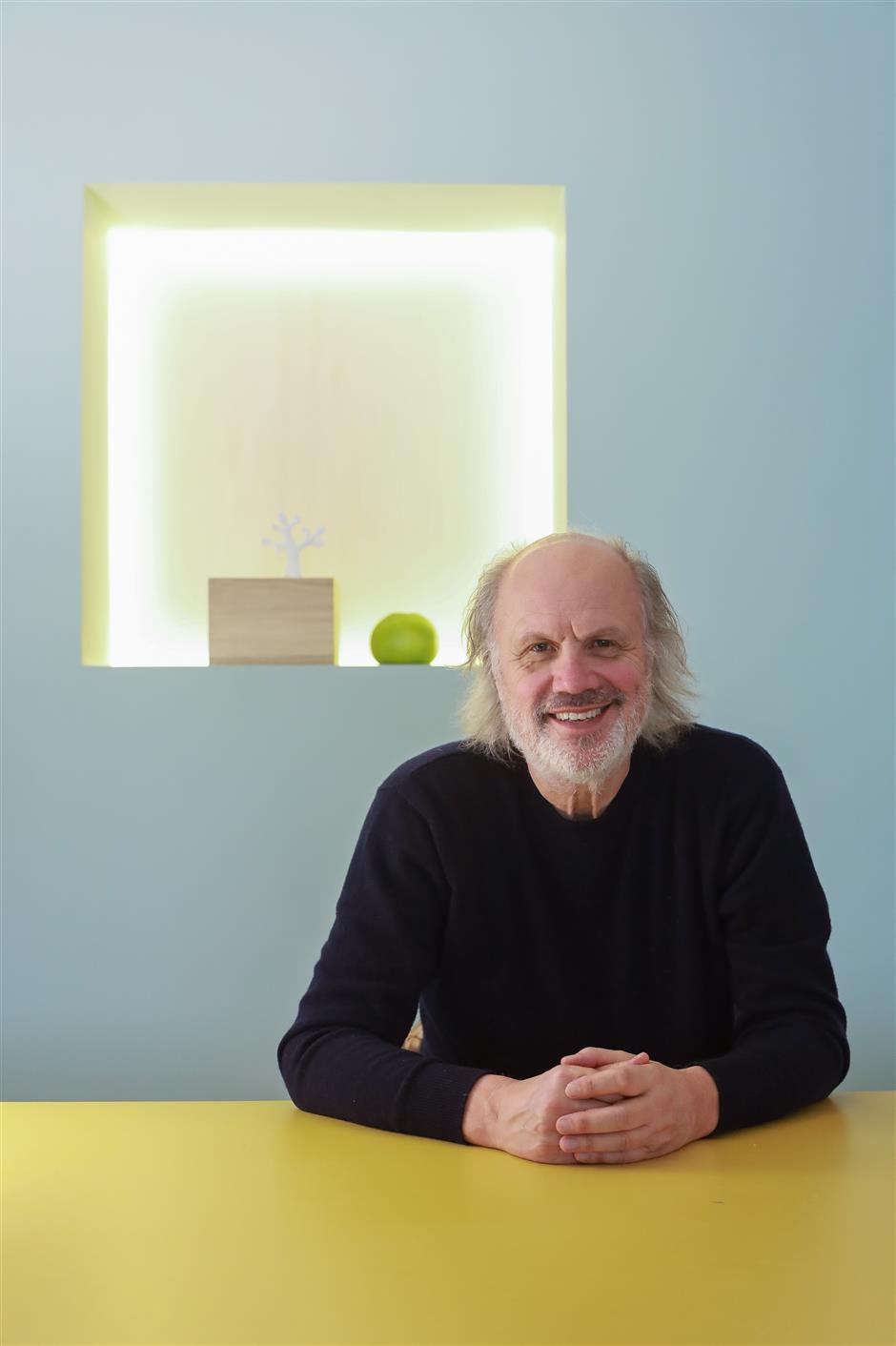 Aldo Cibic now lives in a 34-square-meter flat but says size isn't important if you have the right environment around you.

A famed Italian designer has transformed the environment of a residential community in Shanghai with murals and painted road barriers.

Aldo Cibic, 65, who lives in Anshan No. 5 New Village in the Siping Road Subdistrict of Yangpu District, was a founding member of the Memphis Group in his native Italy. The design movement was set in motion in 1981 in Milan by Ettore Sottsass with a group of international disruptive designers and architects.

Cibic, who was born in Vicenza near Venice, has applied many of the principles of the group to his Siping Road project – the bright colors, geometric shapes and bold, repetitive patterns.

He now lives in a 34-square-meter flat, but, he said, size isn't important if you have the right environment.

"We organized this area to include co-working facilities, a common kitchen, a cafe and shops," he said. "When you have a lot of facilities around, you can live in a very small space. Yeah, I never enjoyed a house like this one."

Lane 1024, Siping Road has become "NICE 2035 Living Lane," created by teachers and students of Tongji, with design input from Cibic.

His ties to China and Shanghai began in 2003, when Cibic made a workshop with Tongji University design students, to present for the first time Chinese design at the Milan Design Week. Cibic made trips to China between 2003 and 2009 to work on more projects with Tongji students.

In those years, Cibic's research projects Microrealities and Rethinking Happiness at the Venice Biennale in 2004 and 2010 introduced the themes of urban regeneration and rural communities. At the same time, the dean of Tongji's college of Design and Innovation Lou Yongqi was starting Design Harvest, a platform for innovation and entrepreneurial activity in the field of urban-rural interaction. 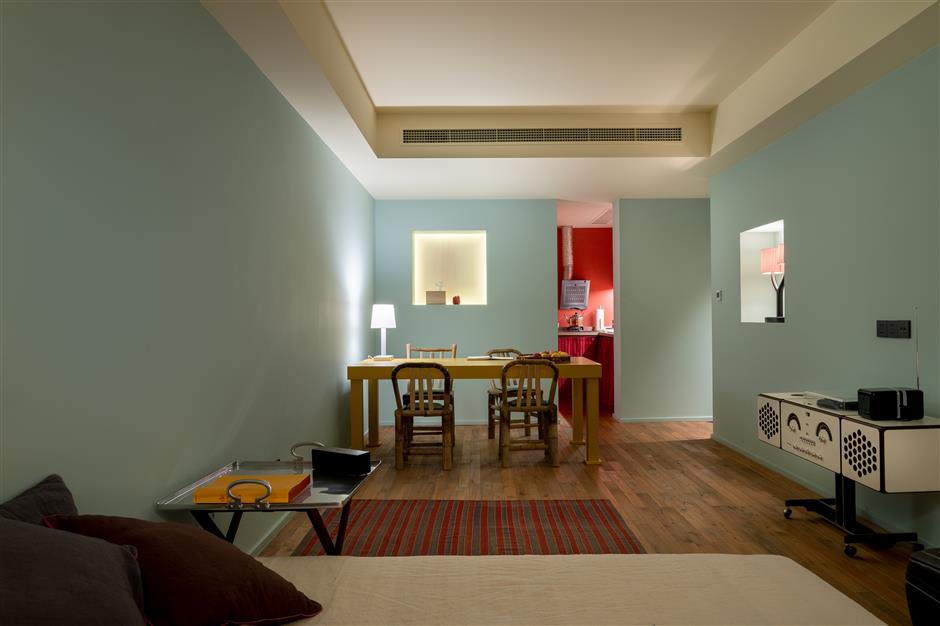 The flat has a red kitchen and a bathroom, while the dining room and bedroom is in green.

After an absence of many years, Cibic was invited by Lou to return to Shanghai in 2018.

"He said to my son, 'You know, your daddy and myself, we are the only ones sharing the same dream in life about the rural communities,'" said Cibic.

Cibic signed on as a professor at Tongji, visiting Shanghai every month and staying for two weeks.

When he first saw Anshan No. 5 New Village, one of the city's earliest worker's communities built in the 1950s, he expressed the desire to live there someday. Last year, that hope became reality.

Cibic is the only foreigner living in the community. 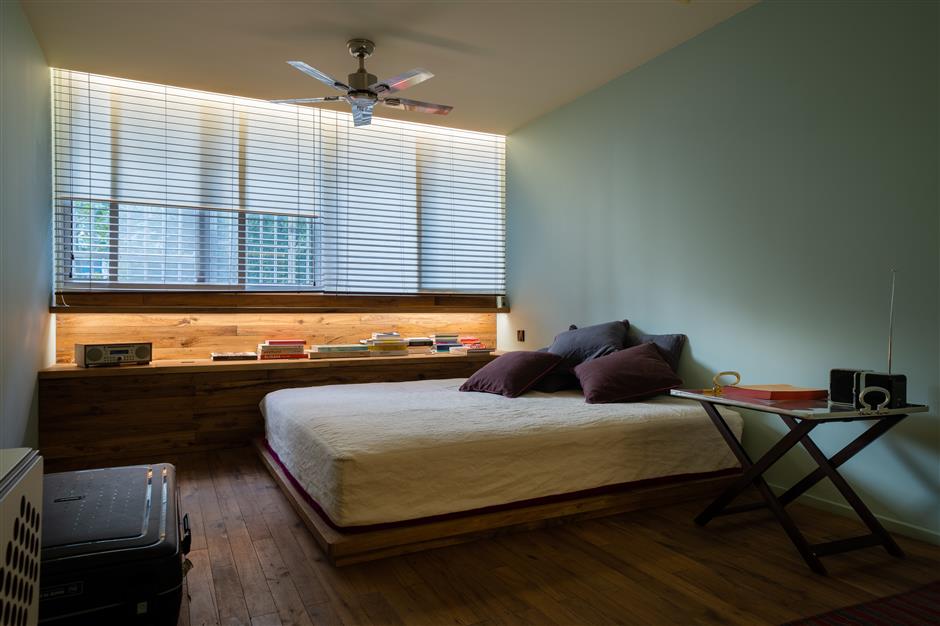 Sunshine and a strip of lamp light up the bedroom zone of Cibic's small flat.

Lane 1024, Siping Road has become "NICE 2035 Living Lane," created by the teachers and students of Tongji, with design input from Cibic.

"NICE 2035" stands for Neighborhood of Innovation, Creativity and Entrepreneurship toward 2035. It is a social innovation project promoted by Lou, with Cibic as creative director.

Its basic idea is integrating a university with communities, tapping talent, ideas and emotions that are a catalyst for a whole new experience, Cibic explained.

He said he thought Siping Road, which is not far from Tongji, was the ideal place for this type of experimentation.

"When I moved to Shanghai last year, I found the site of the project, thanks to the very courteous owner of a laundry," Cibic said. "I have discovered a unique reality, a very appealing way of life, in a district that is not immediately comprehensible." 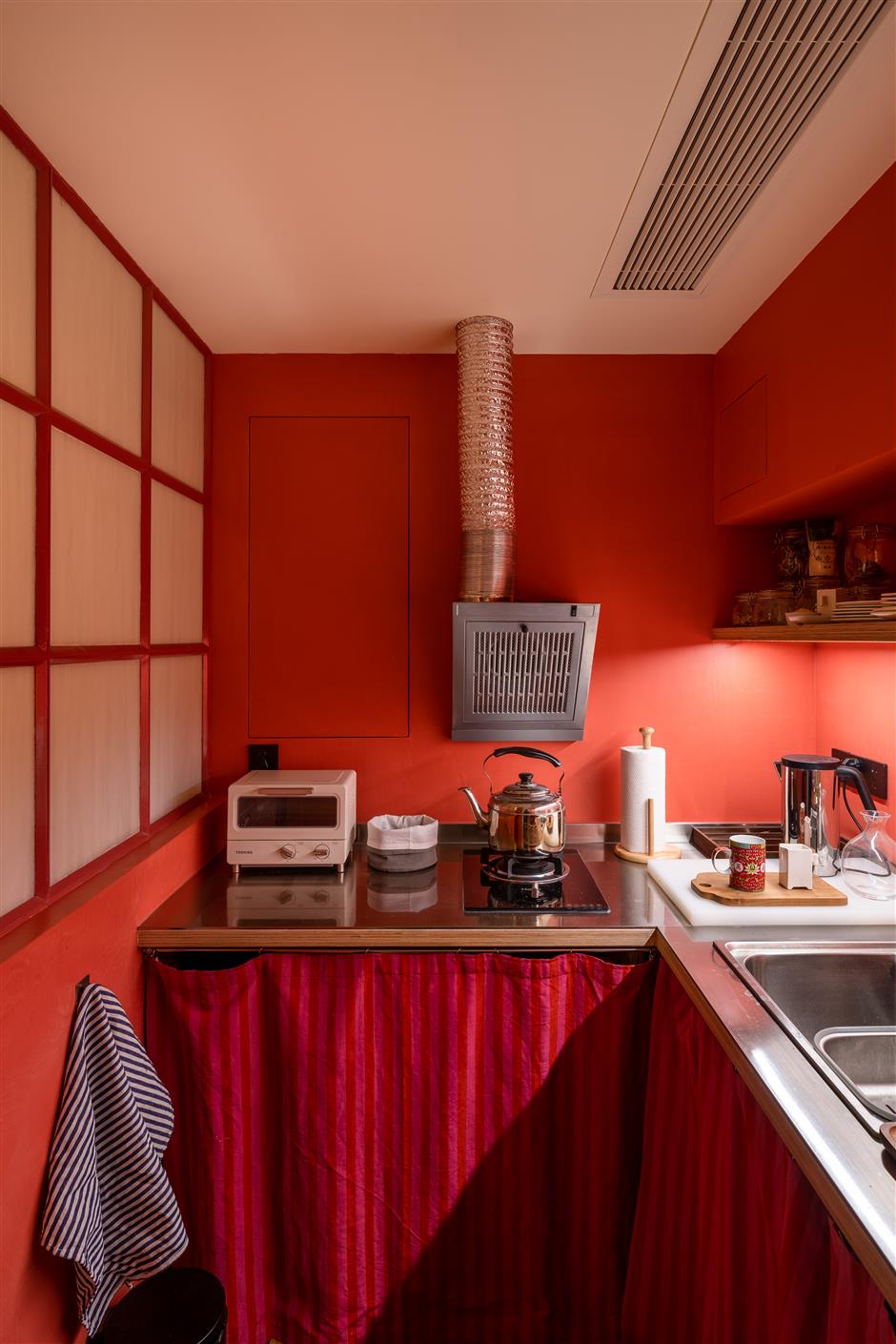 In the kitchen and the bathroom, the red resin was supplied by Italian artistic resin company Gobbetto.

Cibic, a frequent customer of the laundry, made friends with the owner. Cibic designed new signage for the venue, and the owner found him the flat that is now his home in Shanghai.

"I'm very interested in understanding more of the culture and of normal, daily life," he said. "I go to the nearby barber shop, which is 75 years old. I see a life that to me is so rich and so sentimental. It's really a beautiful human situation."

Once when there was a problem with a 3D printer, a colleague found a local repairman.

"It's not a workshop; he repairs by himself on the street," said Cibic. "So you see, all that can be the possible, and we are a kind of friend."

He also is fascinated by an old lady in the neighborhood, who he says reminds him of his grandmother.

"She sits very quietly,' he said. "And I always imagine that I'd love to know hers and the others' stories of life."

Nearly 40 percent residents in the Anshan New Village are senior citizens. The young who live there hanker for something new.

According to Cibic, the introduction of new social activities and new business has already revitalized the area.

"I hope not to become a factor of gentrification," he said. 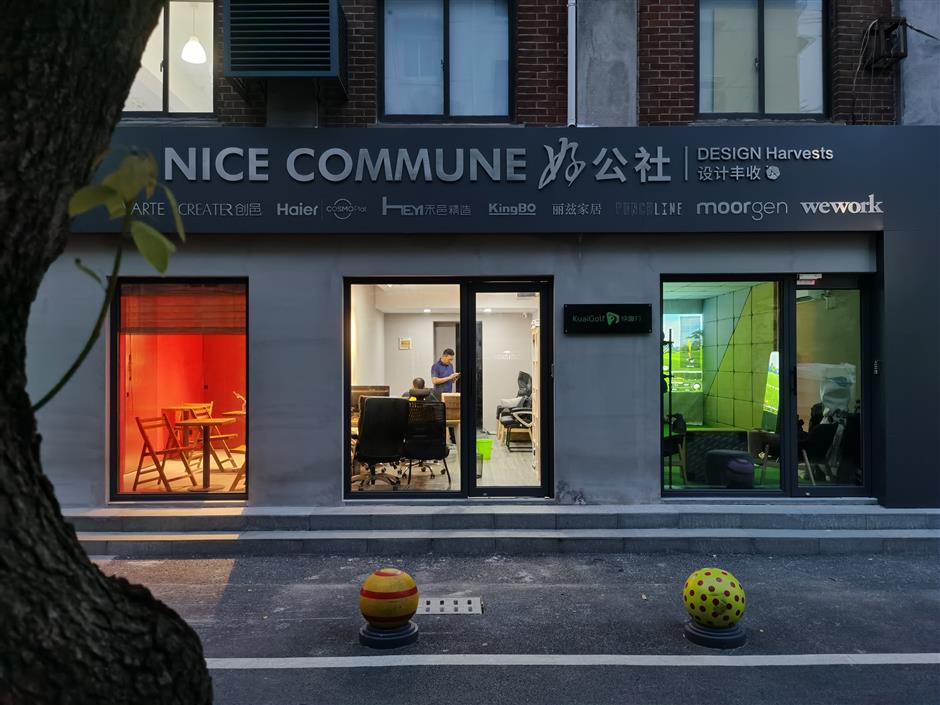 The NICE Commune is a bridge uniting diverse cultures in the community by facilitating social mixing and participation in multiple activities.

This project, she explained, can bring new energy and opportunity to an older neighborhood, including facets that cater to the young.

"NICE Commune was formulated as a bridge between the various cultures of the community – facilitate their mixing and generating multiple activities," Cibic explained. "Yoga courses, pet adoption, production and sharing of food, conversations with young people, small handmade crafts and also a flea market. The goal is to experiment with habitat scenarios for the future of cities."

Lu praised Cibic as a stickler for details. He unfailingly sticks to his idea of design, she said.

"Here, people of a similar age to him spend their retirement playing cards and raising birds, but Cibic keeps creating things and retains enthusiasm for work," Lu said. "I heard he's now learning about artificial intelligence."

Indeed, Cibic is a dynamo, not unlike the city that has become a second home of sorts.

"Shanghai is amazing, a dynamic city" he enthused. "For me, what is happening in China is really amazing. I like to see the desire of improving, improving, improving... It's moving fast. The organization of China is impressive. China is, in my opinion, the most organized country in the world."

He added, "What is nice here is that in China and Shanghai people are very curious, they really like to cooperate. My plan is now to continue to enjoy the life here."

Lu said the urban revitalization project will continue and perhaps spread to the countryside. 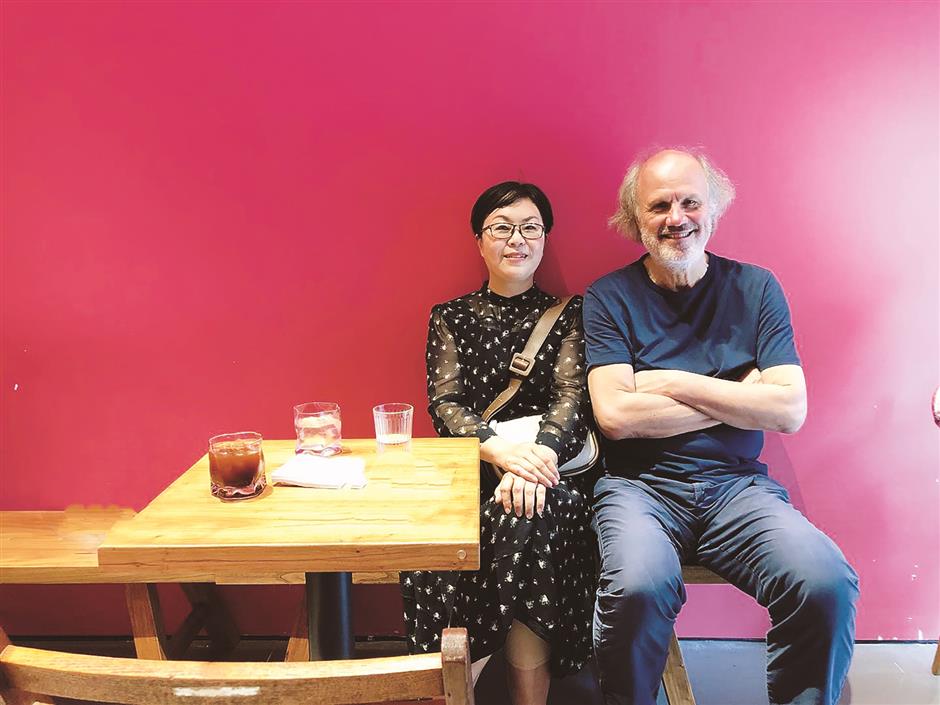 Aldo Cibic meets a friend in the NICE Commune cafeteria.

NICE 2035 is now expanding to the whole of Chifeng Road, near Tongji University, which will become a new "Memphis-style" street, with bold colors and the sustainable technology of the "sponge city."

With the support of artificial intelligence technology, the area is designated as Shanghai's first community under 5G "intelligent cloud management."

Existing pavement, trees, barriers and distribution boxes will be decorated with artistic designs, while flower beds will serve as "rain water gardens" that collect rainfall, and "pocket gardens."

Walls with plants and interactive walls with screens will be provided, along with a "new booth" – a concept telephone booth with facilities for recharging mobile phones and conducting interactive information searches.

Many people living in Siping may not even realize the maestro living in their midst.

Cibic's design pieces and drawings are exhibited in the permanent collections of the Stedelijk Museum in Amsterdam, the Victoria and Albert Museum in London, and the Pompidou Center in Paris.

He is based in Milan but operates internationally, a prime mover in architectural and design projects of distinction.