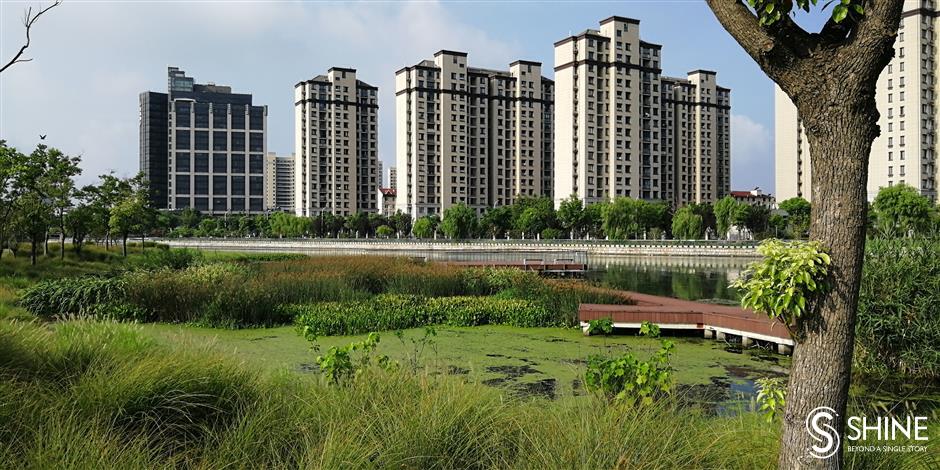 I was strolling in a wetland park in suburban Shanghai last Friday when I noticed a woman dressed in sportswear. She was stooping by the side of a river as if looking for something on the ground.

I approached her and inquired as to what she was collecting. She turned around, still stooping, and stretched her left hand out for me. There were a few snails wrapped in water grass in her palm.

"I'm putting these snails back into the river," she explained. "Naughty kids netted them for fun but failed to put them back into the water. I've been trying to save these neglected snails." 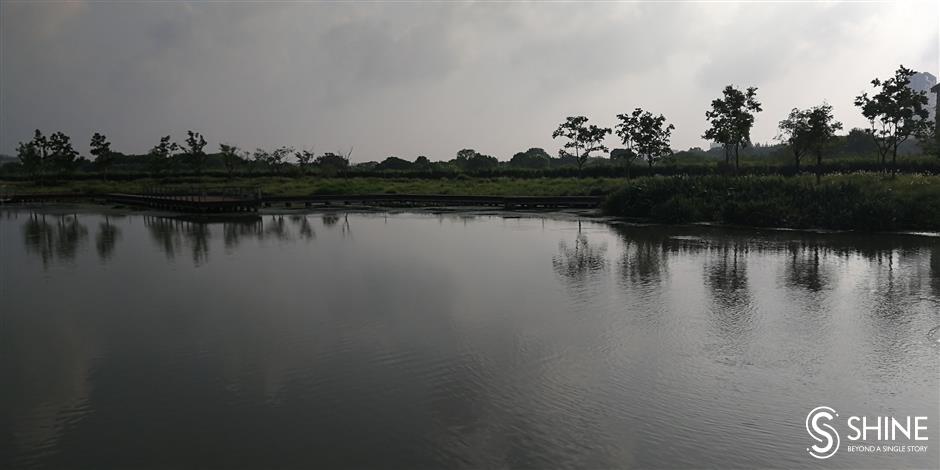 A vast water body in the neighborhood wetland park 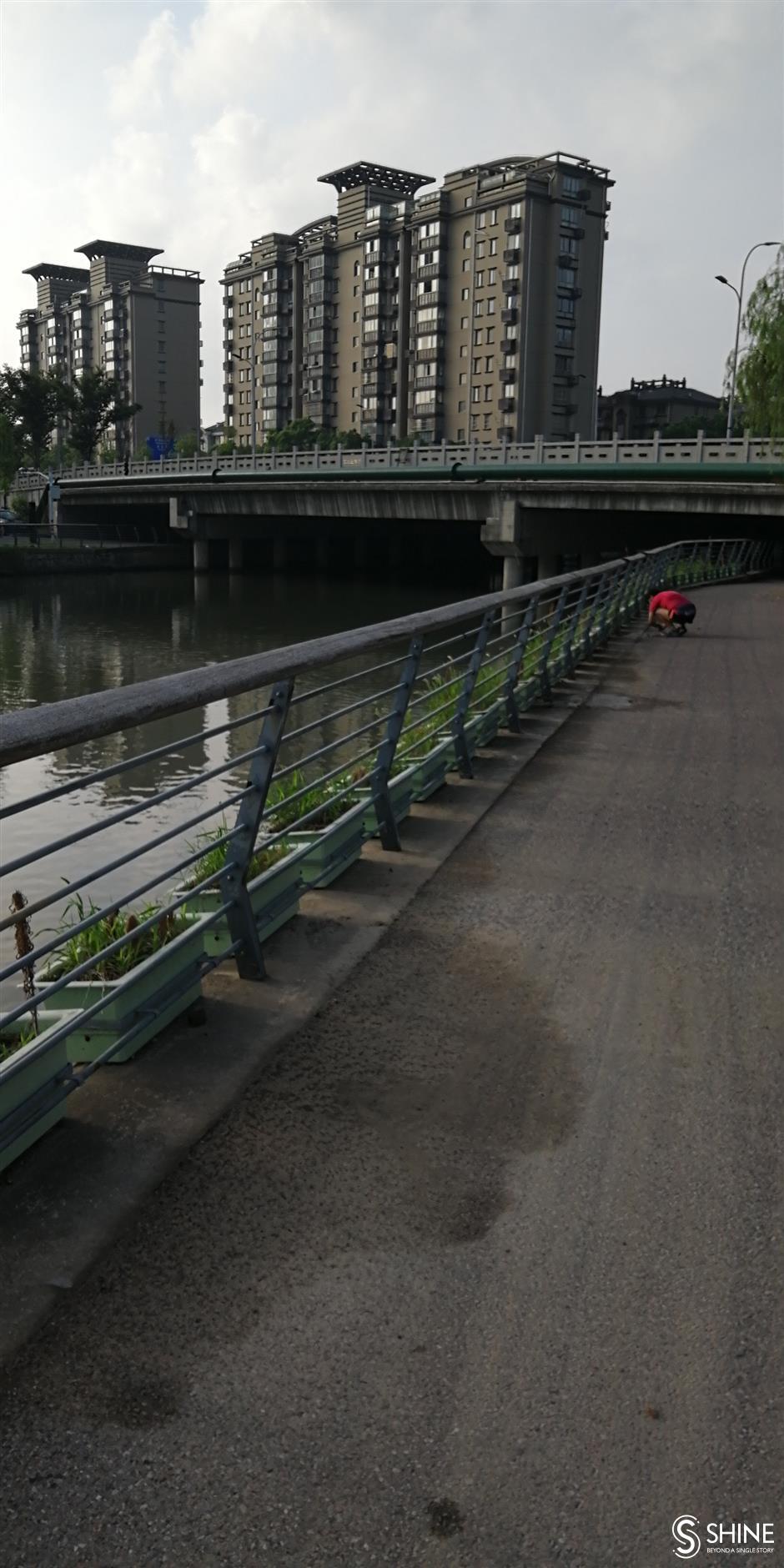 A woman collects snails on the ground and puts them back into the river.

Moved by her deeds, I also stooped down. In about 10 minutes, I collected a handful of snails that I could find in the vicinity and put them back in the river. At first, I thought it would be easy to scoop up these small creatures, but later I found they were glued to the ground, and I had to give them a nudge before I could lift them from the ground.

"The abundance of snails attests to the park's sound ecological environment, and everyone should make an effort to protect it," said the woman in a meditative tone, as if murmuring to herself.

In our conversations that followed, I learned she was a fan of jogging who came to the park for regular exercise.

The wetland park is a 10-minute walk from her place. As I looked around and assessed the surroundings, I realized that the park, rich in waterborne plants like water lilies and reeds, encompasses several residential communities on three sides except for the north. It's your average neighborhood park.

Saying bye to the woman, I walked toward a group of elderly people doing exercises under an elevated bridge.

As I got closer, I noticed they were stretching their legs in yoga or kung fu positions. They all lived nearby. 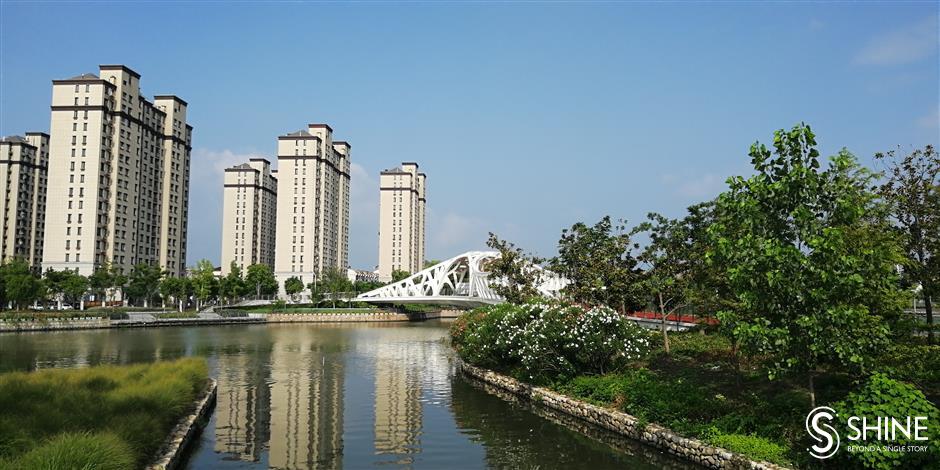 A pedestrian overpass in the wetland park serves as a jogging trail.

This wetland park was once a wasteland next to an industrial site in west Shanghai's Qingpu District. It became a part of a massive new water park that encircled most communities in the district's central areas about two years ago.

Since then, nearly 400,000 locals have been able to "walk into nature" right at their doorsteps. Over the past two years, I've twice walked through the water park with 200 hectares of riverfront open space. I recall a man in his 60s telling me he was very happy to be able to jog at such a "beautiful park near my home."

Such neighborhood parks are playing an important role in Shanghai's ongoing effort to transform itself into a garden city by 2035. They give an increasing number of people easy access to nature for rest, fresh air and exercise. The city gardens, particularly those with sports functions, will help promote public health, according to the Healthy Shanghai Action Plan (2019-2030).

On July 14, city officials in charge of greenery stated that Shanghai will increase the number of gardens to 1,000 by 2025 and 2,000 by 2035, citing the health benefits of green landscapes for both people and the city.

The city now has 532 gardens spread across its urban and rural areas. This year alone, the city will construct 120 new gardens, with more than half of them being "pocket parks" ― small neighborhood parks within a 15-minute walk of nearby communities.

As many officials and experts have pointed out, gardens give everyone equal access to the benefits of nature, and a green landscape gives a city its best color.

Earlier this year, Shanghai Mayor Gong Zheng stated unequivocally that the city will provide "the best resources to the people" as it transforms itself into a garden city. Shanghai is pioneering a new way of growth that prioritizes the health of man and nature by dedicating certain prime urban spaces to gardens rather than "forests of concrete and steel."

Neighborhood gardens are prospering not just in suburban Shanghai but in downtown areas as well. For example, Shanghai has set aside prime land on Huangpu River's eastern bank for the development of the World Expo Cultural Park. Its northern section opened to the public at the end of last year, and 45,000 people visited it during the 2022 New Year's Day holiday. Mayor Gong said that the entire park will be open to the public by 2024.

Xinhua news agency reported earlier this year that the piece of land earmarked for the cultural park had an estimated market value of at least 100 billion yuan (US$15 billion), but instead of using it for commercial development, the city chose to reserve it for the people who would cherish such a public green space, especially those who live or work nearby. The agency quoted a city official as saying: "Shanghai needs gardens and blue skies as well as high-rises and businesses." 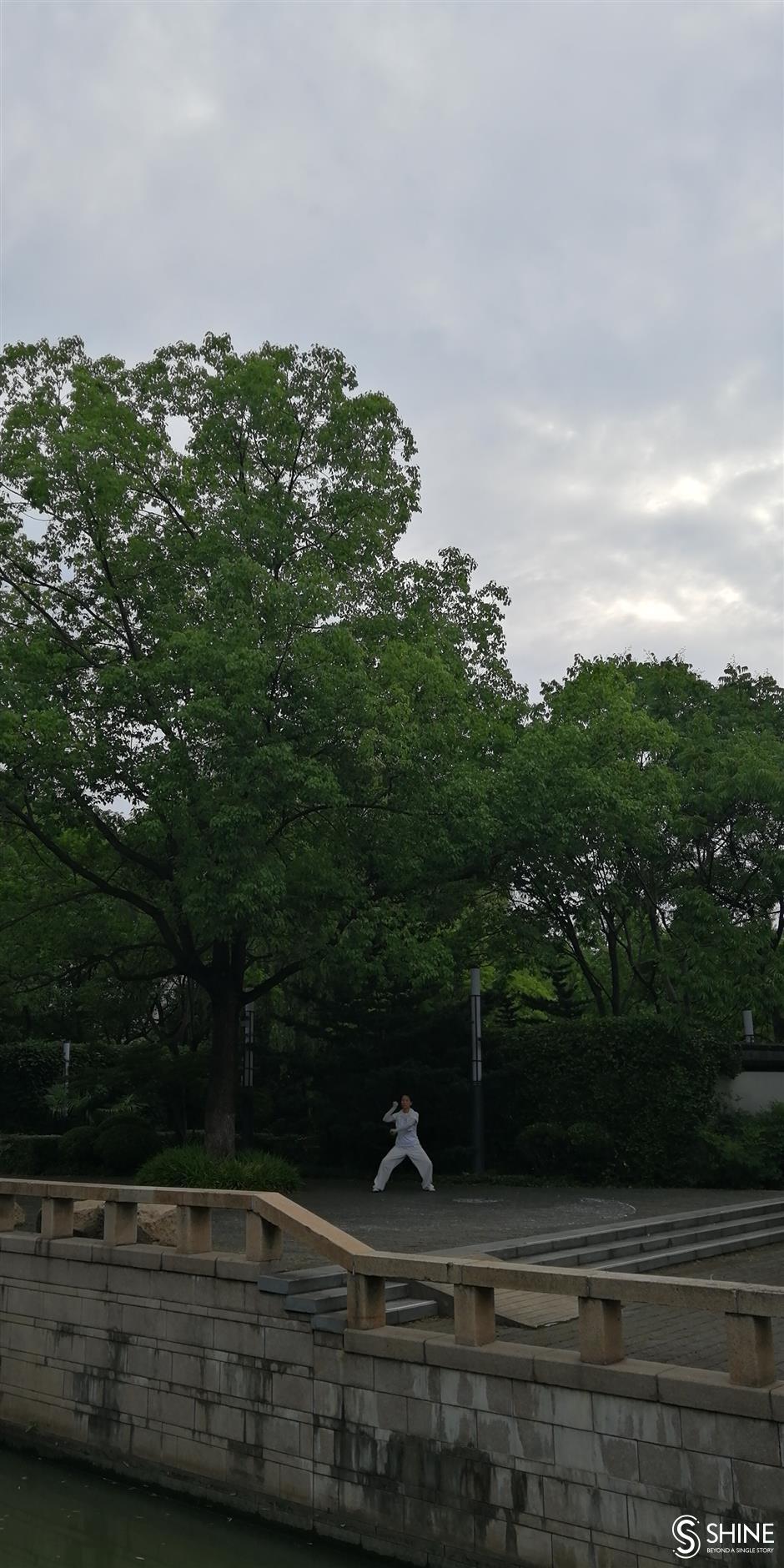 A resident exercises under an ancient tree at Beijingyuan Park, Qingpu District.

In "The Nature Fix: Why Nature Makes Us Happier, Healthier, and More Creative," award-winning author Florence Williams wrote, "When you walk out in nature, it's like wearing rose-colored glasses. In nature, everything is a little more positive.

"One thing is clear: human brains seem to grow best when they get some time outside."

Yoshinobu Ashihara (1918-2003), a renowned Japanese architect, wrote in his book, "The Aesthetic Townscape " that "man and green spaces naturally have a symbiotic relationship," and that green colors typical of a garden help to calm people's minds. He made these observations while considering how to increase green space in modern Japanese cities, which usually lack public land for gardens.

According to the Xinhua report, Shanghai had a per capita public green space of only 0.132 square meters when the People's Republic of China was founded more than 70 years ago. Such a tiny space equals the size of a pair of shoes, Xinhua noted metaphorically. When Shanghai has 1,000 gardens by 2025, the city's per capita public green space ― primarily garden space ― will increase to more than 9.5 square meters, Xinhua reported.

According to Shanghai's master plan, a garden city will take shape by 2035, when 2,000 gardens will have been built, along with various ecological corridors flanking its major rivers.

In fact, garden cities are already taking shape in a number of suburban districts in the city because of their natural and historical advantages. Most of Shanghai's natural lakes, bucolic villages and ancient watertowns are located here, providing a pristine green landscape for future development.

For example, a 91-square-kilometer new city is being built within Qingpu District. The wetland park I visited last Friday is one of the many neighborhood parks created along a vast network of rivers and lakes. These parks look like different pearls forming a huge "necklace of gardens" for the future Qingpu New City. 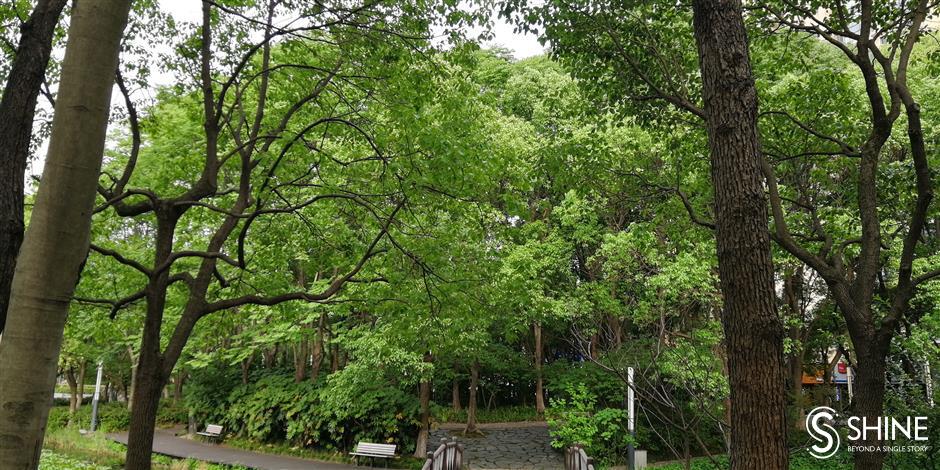 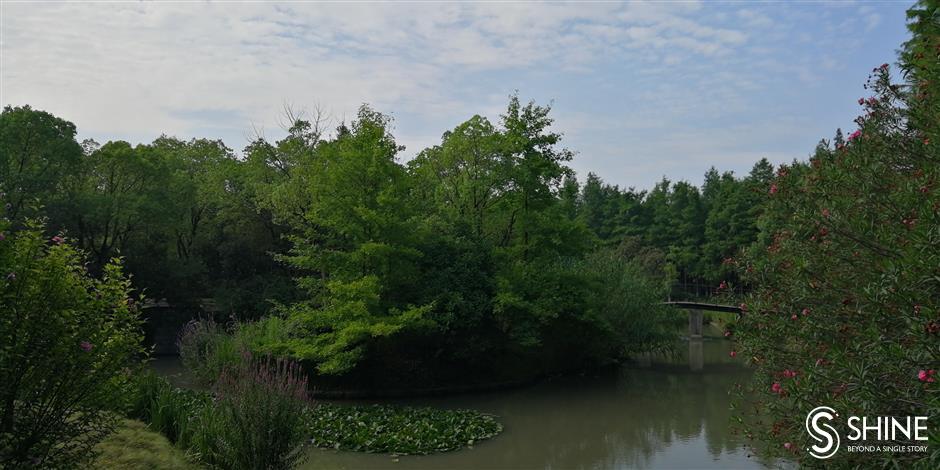 About 3km to the southeast of the wetland park is the famous Beijingyuan Park, which spans nearly 50,000 square meters at the foot of many residential communities in the center of the future new city. Walk about 3km further south from the park and you will reach Nanjingyuan Park, near the southernmost border of the new city. It spans nearly 80,000 sqm around many residential buildings.

In Chinese, jing means "forested valleys." These two parks, with a variety of plants and clusters of tall trees, create the image of "mini forested valleys" for visitors who seek an escape into nature from downtown hustle and bustle. 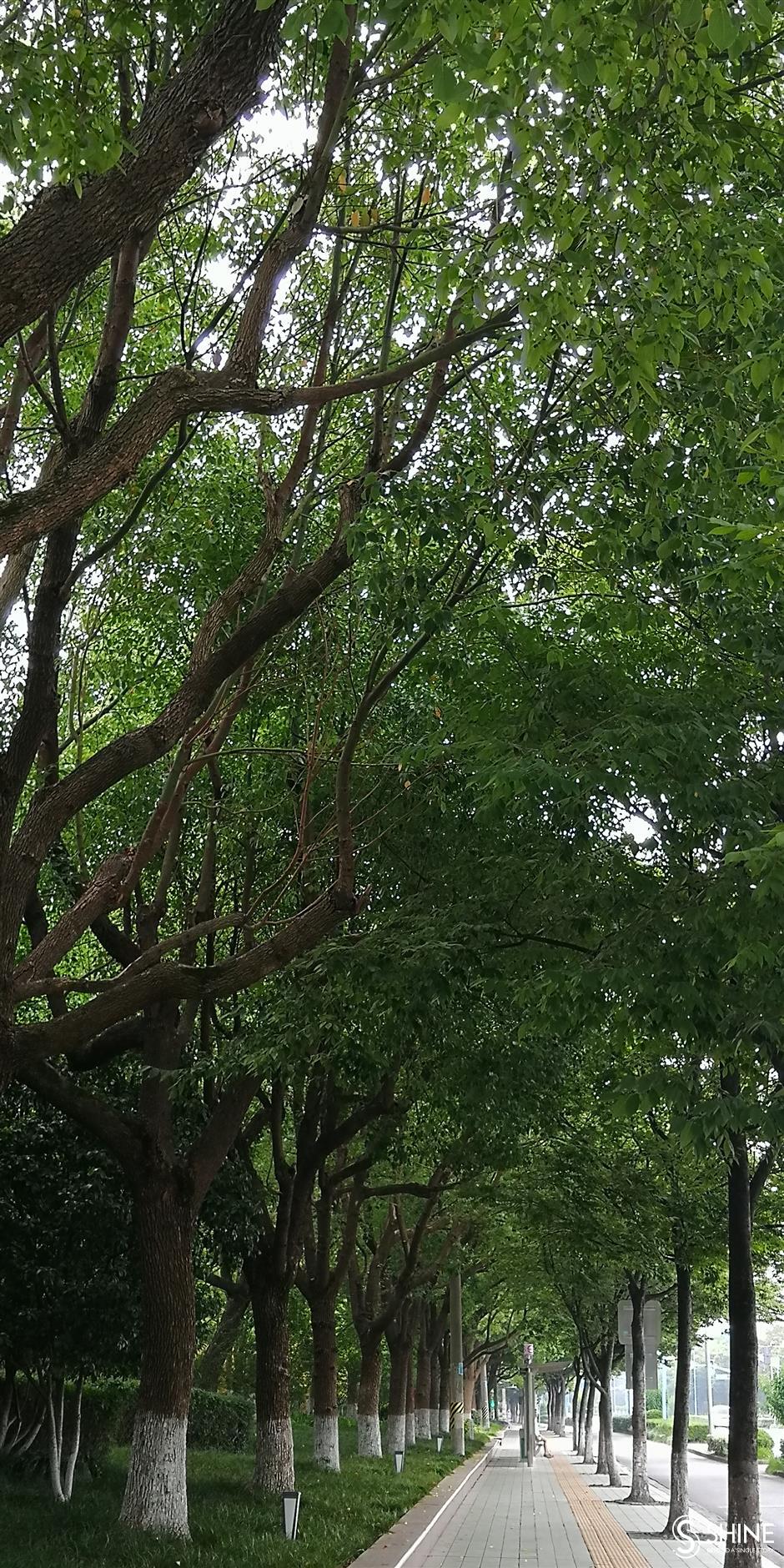 In between Beijingyuan and Nanjingyuan parks, there is a big lake and a garden, where trees have grown so tall and wide that their canopies provide shade for many pedestrian paths. As I walked back and forth between these parks last Wednesday, the ground temperature surged to nearly 40 degrees Celsius, but I did not feel too exhausted, thanks to the well-shaded gardens and pedestrian routes that delineate the landscape of the central areas of Qingpu New City.

If we define a "garden city" as an urban area where there's a garden within a 15-minute walking distance from home, Qingpu New City has nearly done it and will do better.

This year, a 1-square-kilometer central park will be built in the "new city," which borders the wetland park I visited last Friday. That day, I saw large pieces of grassland had been enclosed to pave the way for the construction of the new Shangdahe Central Park.

Shangdahe literally means "Shangda River" in Chinese. A nearby factory will be converted into an industrial museum to mesh with the spirit of the future park.

Parks with no walls

A singular feature of all these gardens is that they have no enclosures; everyone can enter or leave at any time, except during quarantine measures. 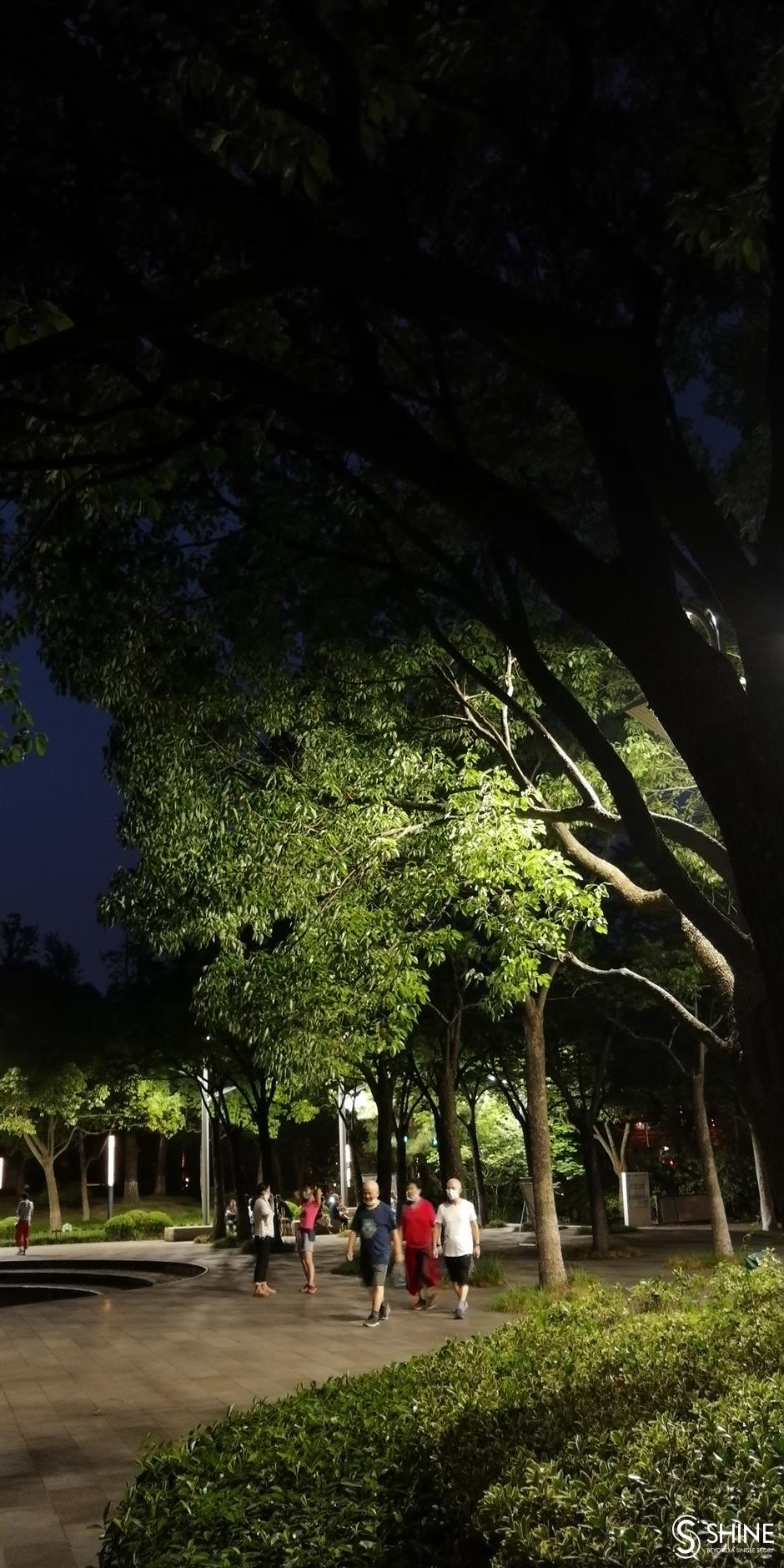 People walk in Beijingyuan Park, which is not enclosed.

At Beijingyuan Park, seated between residential communities and a major hospital, I saw a patient in his ward uniform sauntering in the park at dusk, accompanied by his wife. Other people in the garden received them well, treating them as their equals. Some even waved out to the couple. 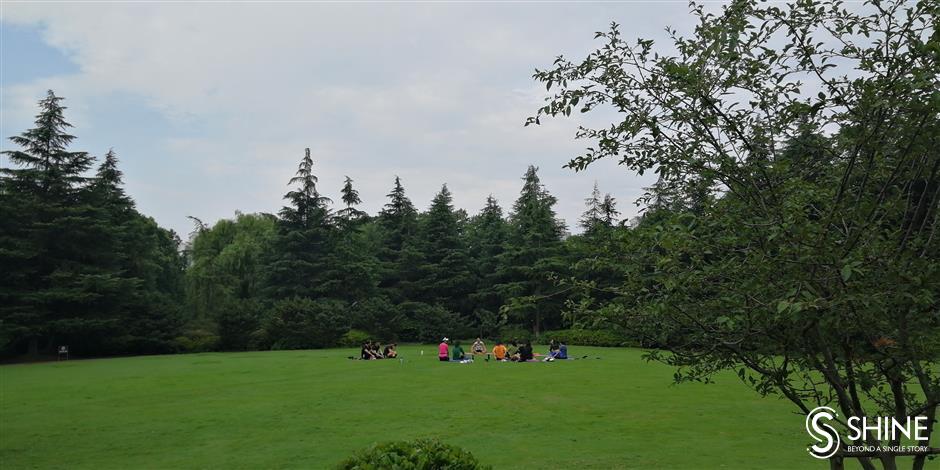 A group of young people practice yoga on grassland at Nanjingyuan Park.

At Nanjingyuan Park, I met a group of young men and women at about 7:30am who were practicing yoga. A young lady told me they had come before 6am so that they could practice for an hour and a half before the weather became hot.

"We all live nearby, including our coach, so it's convenient for us to come here any time ― the park has no walls," she said.

"We didn't know each other before," she explained. "We joined the same WeChat group for yoga fans, and later found that we were neighbors. Isn't it amazing? Now our coach teaches us for free."

I told her I had subscribed to an online yoga course and could only practice at home. 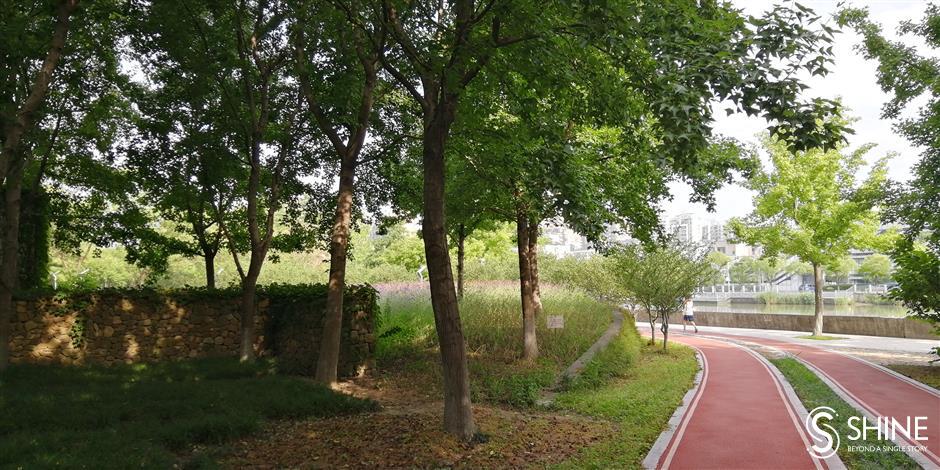 A jogging track at Nanjingyuan Park 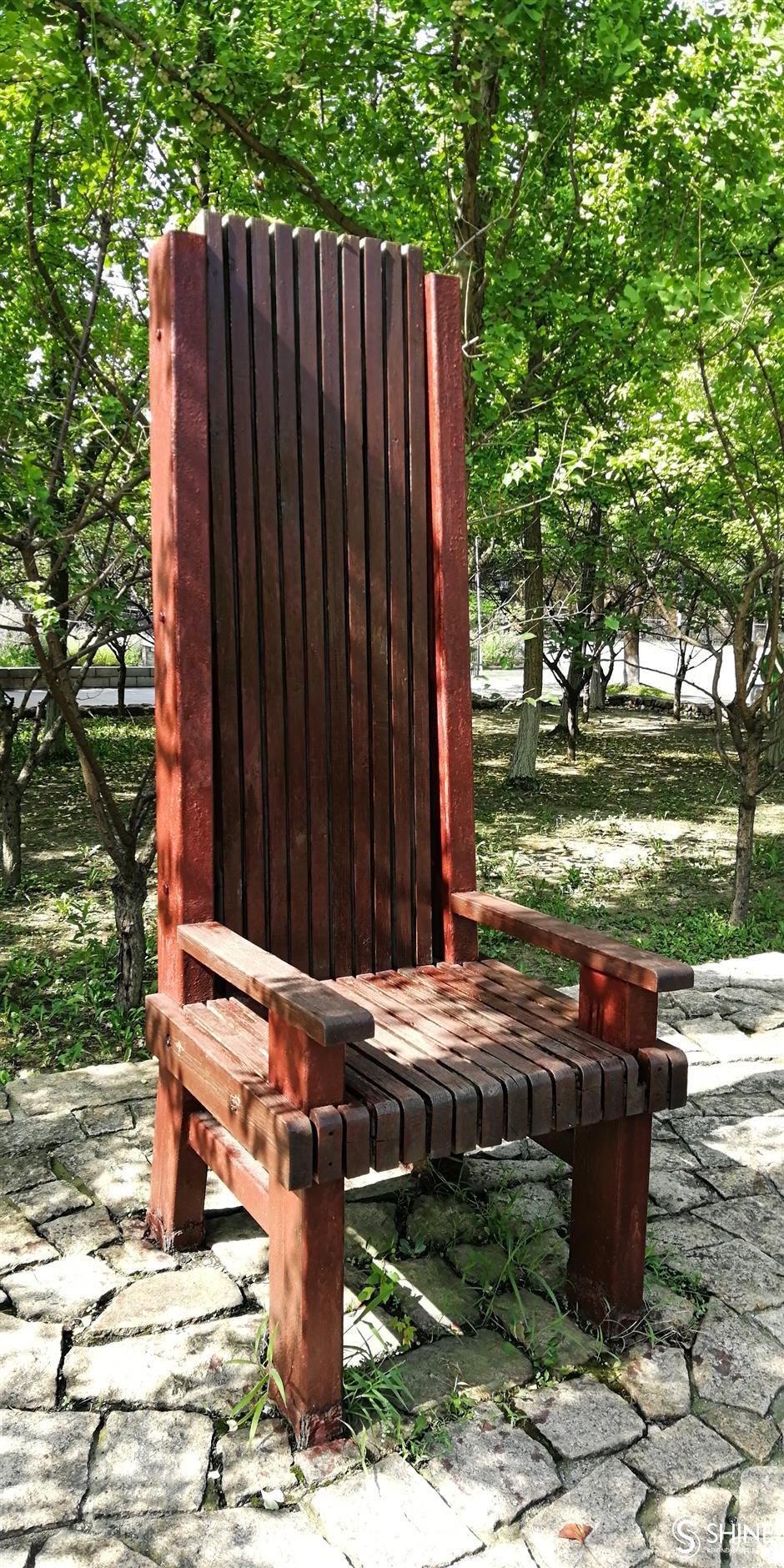 Nanjingyuan Park has many wooden chairs for visitors to rest.

Kindergarten students pose for pictures at Nanjingyuan Park during their graduation ceremony.

"It's fine to practice yoga at home, but do go outside to breathe fresh air whenever possible," she suggested. "Our neighborhood park is a luxury for those of us who like outdoor exercise."

Following her advice, I've now started to practice yoga at a pocket park near my home as well.

Shanghai's neighborhood parks can be big as well as small.

In Jiading New City, the construction of a huge wetland park has begun. It now has an ecological space of more than 200,000sqm with over 60,000 trees, creating a haven for herons and many other birds.

According to a recent report by The Paper, a local news portal, 11,000 trees will be added to the future wetland park.

Jiading's massive wetland park is one of seven similar parks Shanghai will build this year to create more neighborhood parks between the city's downtown and suburban areas.

By 2035, there will be a park near every neighborhood in Shanghai. That will provide a footnote of what "a people's city" means. 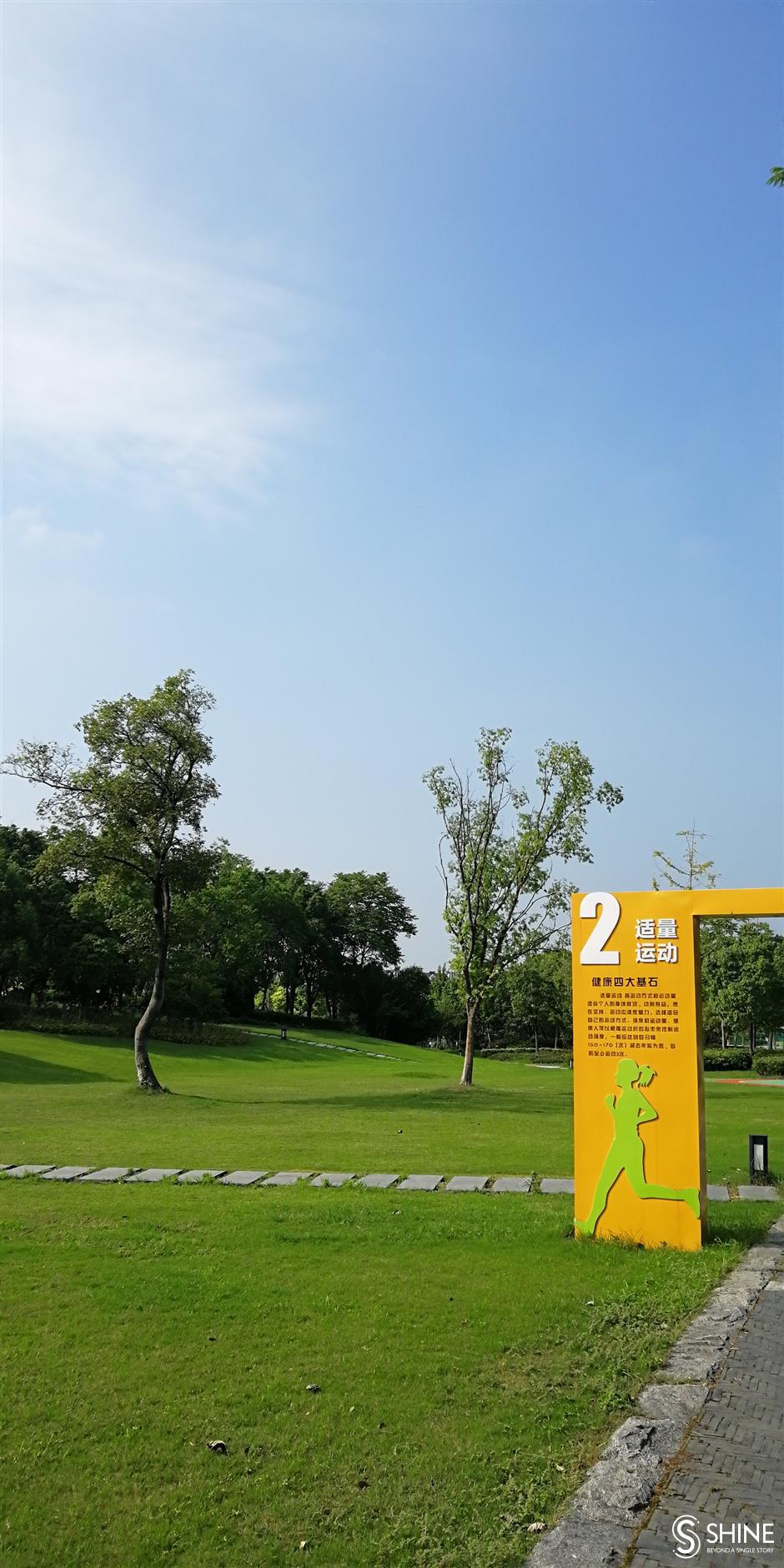 A pocket park in Zhaoxiang Town, Qingpu District, near the author's home