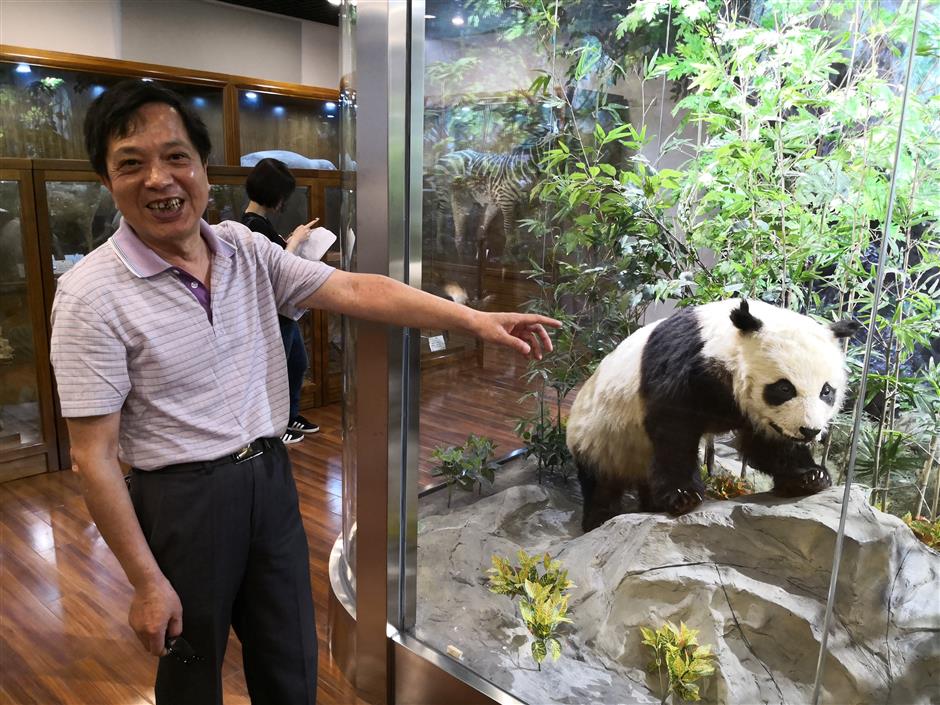 Tang Shimin, 65, retired five years ago, but he is still working at Fudan University to set up a museum for the more than 5,000 animal specimens that his father and he have created over more than half a century.

Their taxidermy collection includes endangered species like white-fin dolphins and pandas, as well as huge animals like a camel and a giraffe.

“About 80 percent of the specimens were created by my father,” said Tang with pride. “But now, it’s hard to find someone to take over my duties.”

Tang is the fifth-generation in a family of taxidermists and specimen collectors.

The two became acquainted when La Touche bought some egret feathers from Tang and asked the family to hunt for rarely seen birds and fish for him. He also taught them taxidermy.

With help of the Tangs, La Touche discovered many new bird species and shipped a large volume of specimens back to the UK.

The Tangs continued to refine their taxidermy skills, becoming one of the two most famous families for making specimens in China.

An estimated 30 of the fourth and fifth generations of the family worked in public museums and universities around China, 10 of them in Shanghai, including Tang Shimin’s father and younger brother.

The specimen room at Fudan dates back to the 1930s, when two European scholars stored more than 100 specimens there. The university later invited the Tangs to manage the specimens and create new ones for research and education.

Tang Shimin’s father Tang Ziying joined Fudan University in the 1950s. He brought his sons to the university frequently, sometimes asking them to assist him in taxidermy.

During the Cultural Revolution, Tang Shimin left Shanghai to work on development in rural areas, while his brother Tang Shihua learned taxidermy from his father because schools were closed in that era.

The elder brother returned to the city in 1979, taking over for his father, who was nearing retirement. The younger brother was employed by Shanghai Normal University to take over the duties of an uncle who was also retiring.

“After I went to work at Fudan, my father began to teach me all his skills,” Tang Shimin told Shanghai Daily.

As taxidermists, the Tangs skin dead animals, apply preservatives and then reshape the original appearance of the animals, sewing the skins back on in carefully hidden seams.

“For most mammal bodies, we cut the skin at the stomach, but for primates, we have to cut from the back because they have few hairs on their stomach and it’s not easy to hide the seam,” Tang said.

“We fill the specimens with materials like paper and cotton,” he added. “But for mammals, dry straw is the best filler because it’s flexible enough to make a smooth body surface and doesn’t shrink easily.”

Tang said the most difficult task is restoring an animal’s face with a lifelike expression. He has visited zoos and gone into the wild to observe animals and take pictures.

“You can search for pictures and videos online now, but in the 1980s and 1990s, I had to visit zoos and observe animals in the wild to understand their habits, gestures and expressions,” he said. “It’s troublesome, but you have to know the animals to make specimens as lifelike as possible.”

Tang said one of his most satisfying works is the specimen of a macaque monkey that died in Shanghai Zoo in the 1990s.

“The expression on its face was very close to what it looked like when the animal was alive,” said Tang. 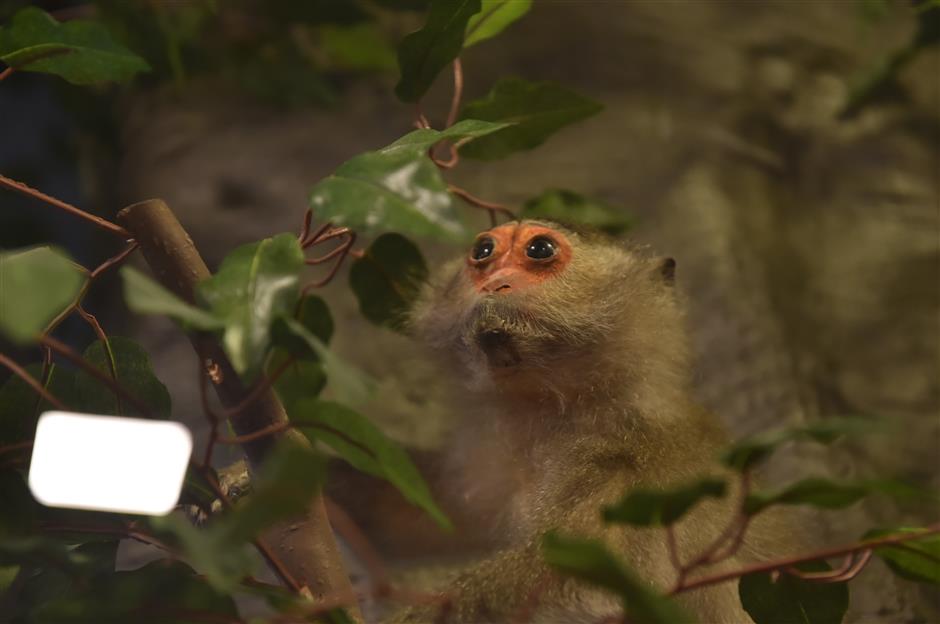 Tang said one of his most satisfying works is the specimen of a macaque monkey that died in Shanghai Zoo in the 1990s.

Another satisfying specimen was a bearcat that died in the zoo in the latter 1980s.

“Bearcats are nocturnal and difficult to rear, so the Shanghai Zoo has had only two in its history, and one is now a specimen in our museum,” he said. “There was no previous experience to learn from, so I did it with my father according to our observations.” 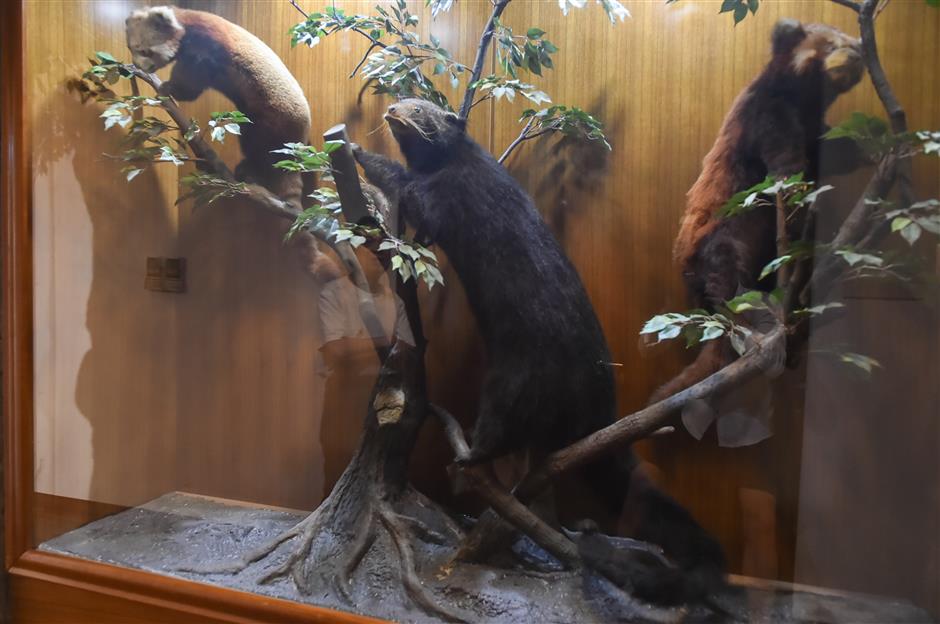 The bearcat specimen in the center is rarely seen.

In the course of his work, Tang has accumulated a vast amount of zoology knowledge.

His students said he is so familiar with animals that he can readily tell you the characteristics of any particular one if asked. He has also been serving as a tour guide when local students visit the specimen collection and has published several papers, including the evolution of bird species in Shanghai.

The specimen room at Fudan has been expanded from about 500 square meters to more than 1,000 square meters, using an 8 million yuan (US$xxx) donation to the museum.

“The conditions in the past were so poor that the cabinets were not well sealed and specimens collected dust that attracts bugs and damages the collection,” he said.

Well-sealed spacious glass cases have been installed in the museum, along with an air-conditioning system to maintain optimum conditions. Tang has designed various settings to display some of the more important specimens, such trees for monkey and a python with a frog in its mouth. 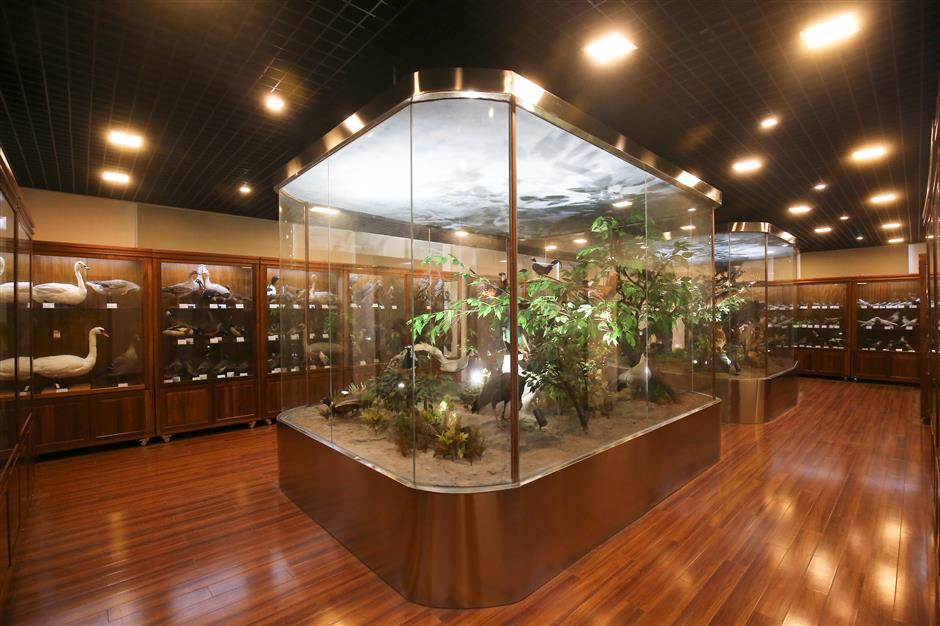 Some of the specimens displayed in glass cases at the specimen museum at Fudan University.

Tang said taxidermy and specimen management tends to be viewed as dull, and many students just aren’t interested in taking up a career.

“Some students were interested in the field when they studied at university, but none wanted to choose it as a career,” he said. “It’s not the most respected job at the university and it lacks promotion opportunities. Then, too, the pay isn’t particularly attractive, compared with other jobs.”

Tang said even his daughter showed no interest in the work and is employed in a bank.

“Students want to learn taxidermy in class, but they don’t choose it as a career. “None of the six-generation descendants of my family line now works as a taxidermist.”

In more recent years, China’s enhanced animal protection laws meant that fewer animal carcasses were available for preservation. The brothers were always on the look-out for dead animals they could appropriate. Whenever they heard of beached marine animals or animals that died in nature reserves, they rushed to the scenes to begin negotiating for the remains.

Both now the two brothers have officially retired, replaced by new specimen managers who aren’t involved in taxidermy. 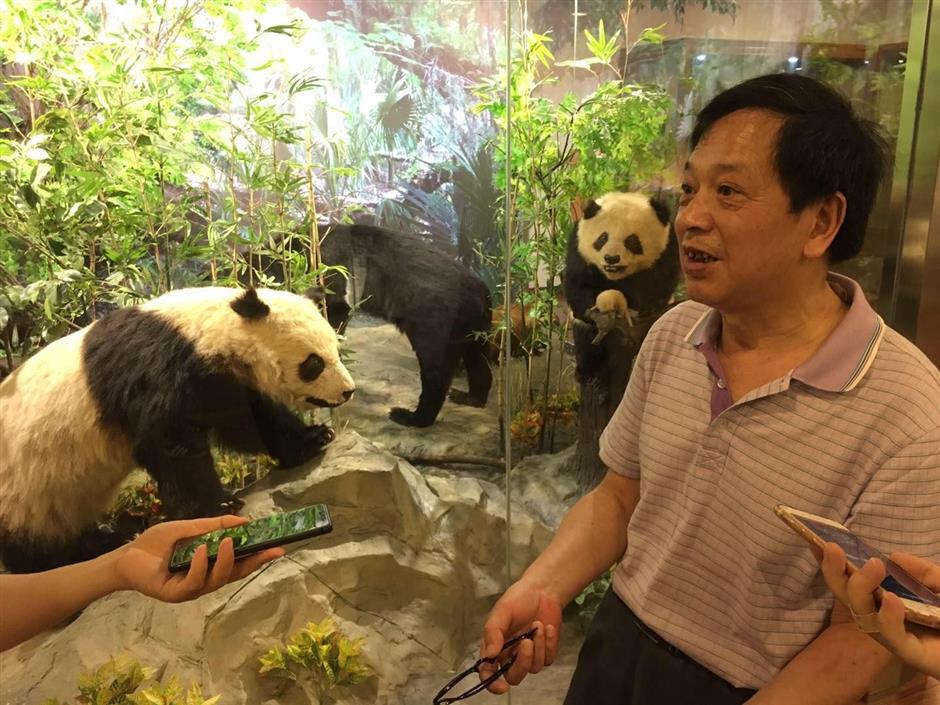 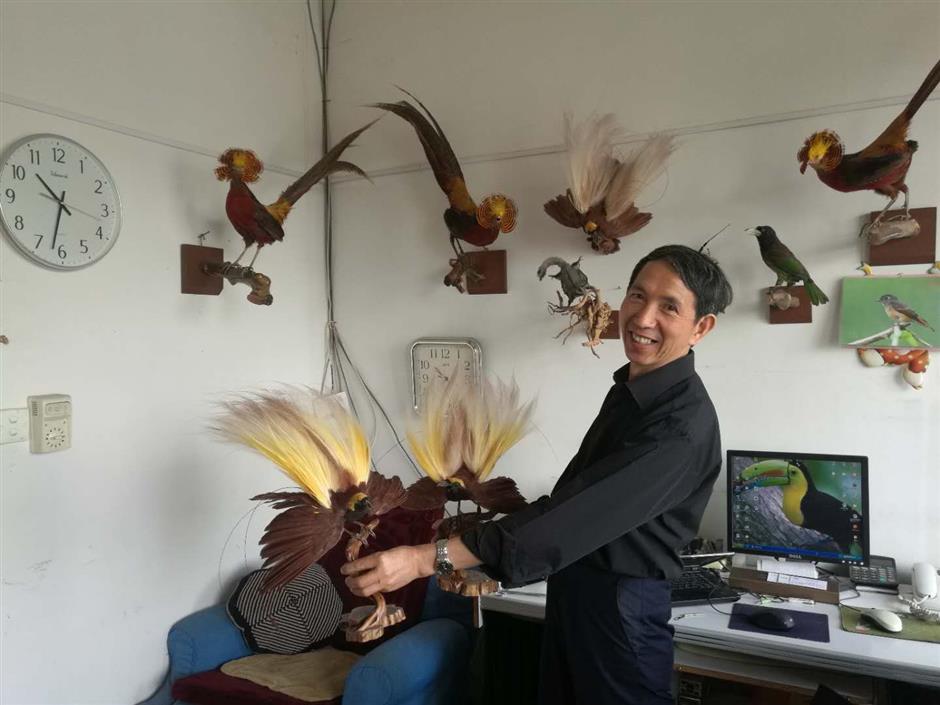 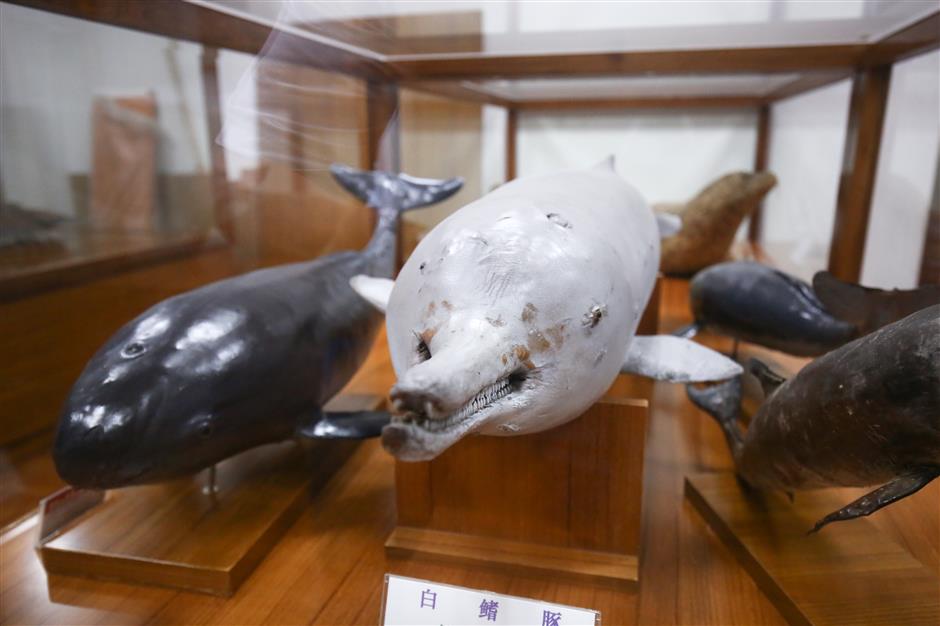 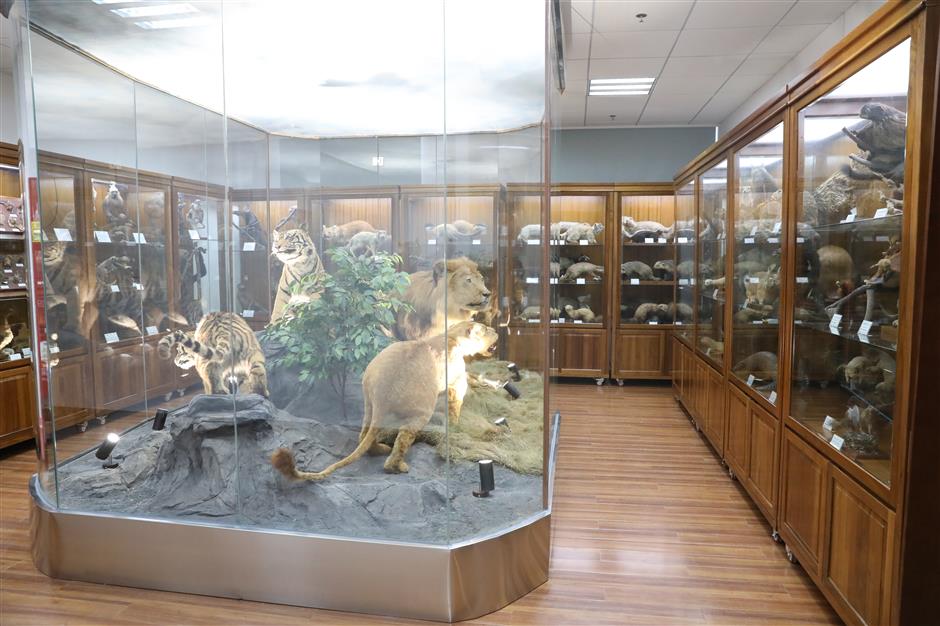