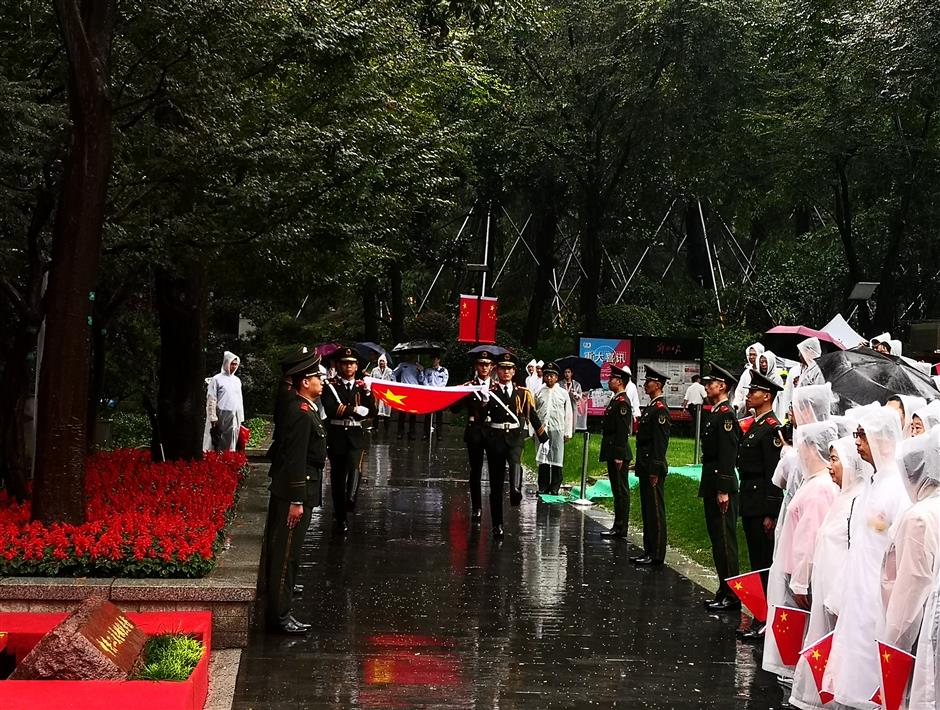 Drizzle didn’t dampen patriotic fervor on October 1 as soldiers solemnly carried China’s national flag to a flag-raising ceremony held at the memorial site of the Communist Party’s Second National Congress in Jing’an District. The ceremony was part of events observing the 70th anniversary of the founding of the People’s Republic of China. 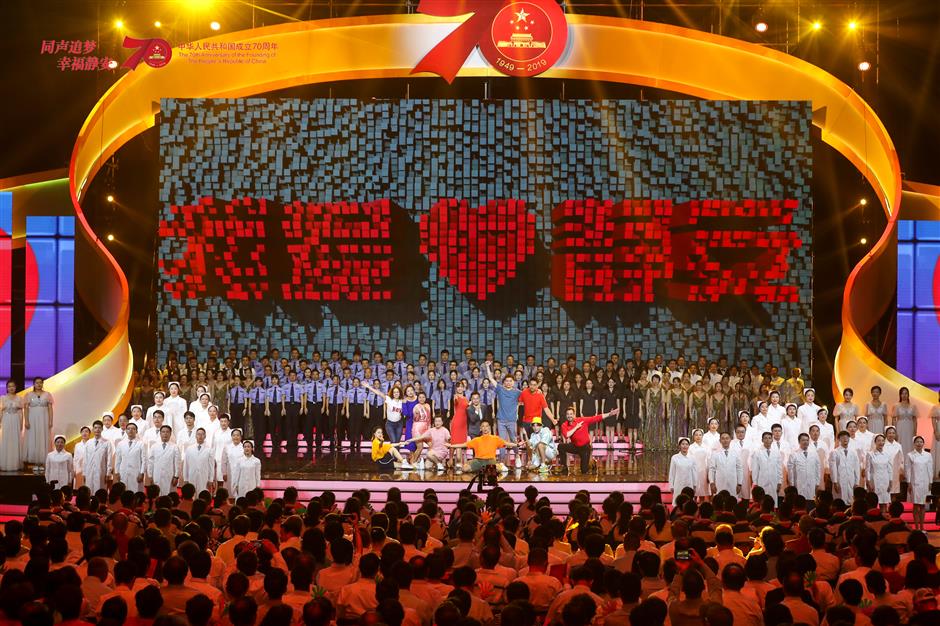 Jing’an residents stage a grand performance to express their love of the country following the flag-raising ceremony. 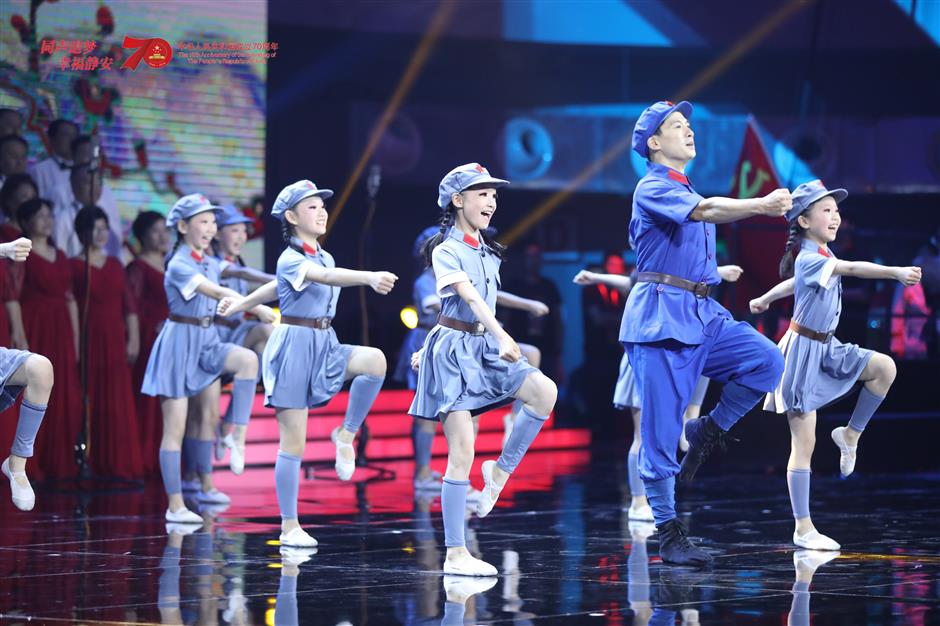 Despite heavy rain, more than 500 people turned out at 8:30am on October 1 to attend a special flag-raising ceremony held in front of the memorial site of the Party’s Second National Congress.

The first Party constitution was drafted at the site on Laochengdu Road N.

In July 1922, 12 Party delegates gathered in secret at the residence of Li Da in the Fudeli neighborhood, one of few remaining clandestine Party sites in the city following a series of police raids. In a footnote to history, Chairman Mao Zedong failed to attend the meeting because he forgot the address.

Over eight days, the 12 delegates shaped the first Party constitution, which contained six chapters and 4,000 words.

“Jing’an is encoded with ‘red’ revolutionary DNA,” said Lu Xiaodong, the district’s Party chief. “This was where early Party members mainly worked. It leaves the footprints of many revolutionists.”

He added, “Over 70 years, we remain true to our original aspiration and keep that mission firmly in mind. Jing’an grows with the country and the times, and we shall remember the past and strive for a better future.”

After the flag-raising ceremony, Zhang Shihua, nephew of Zhang Renya, an early Party member, shared stories about how his uncle protected the first constitution.

Zhang Renya was one of 200 Party members who each received a copy of the first constitution shortly after the Second National Congress was held.

In 1927, when the ruling Kuomintang launched a crackdown against the Party, Zhang spirited the Party’s founding documents, including the copy of the constitution, to safety in his hometown of Ningbo in Zhejiang Province.

“At that time, some people just burned those documents,” Zhang Shihua said. “But my uncle said these documents were crucial to the Party. He couldn’t find a safe place to hide them in Shanghai, so he finally decided to hide them in Ningbo.

Zhang Renya gave the documents to his father and hurried back to Shanghai to continue revolutionary work. The father, who supported his son’s work, lied to neighbors, telling them that his son had died in Shanghai. Then he secretly buried the documents in the empty grave.

The young revolutionist did die, of illness, in 1932 at age 34. But his family wasn’t aware of his death. When he failed to return home after the founding of the People’s Republic of China, the father decided to hand the documents over to the country in 1951. Currently, they are preserved in China’s Central Archives in Beijing.

Over the years, family members tried to discover what happened to Zhang Renya. In 2005, they found an old newspaper published in 1933 that contained an article mourning his loss.

At this year’s 70th anniversary celebrations, a grand performance was staged by Jing’an residents to express their patriotism.

They included Lu Qiming, 90, who composed the popular revolutionary song “Ode to the Red Flag.” At age 10, he followed his father and joined the new Fourth Army. At age 19, he settled in Shanghai, not returning to his hometown in Anhui Province.

“I just wrote about my personal life and the People’s Republic of China in a song,” he said. “I wanted to thank Shanghai. I deeply love this city. Shanghai nurtures me, and my life is enmeshed with the city’s development. Here my dream came true.”

Among other Jing’an residents, the celebrated dancer Huang Doudou and local children staged a dance performance to showcase Jing’an’s “red” revolutionary culture. And 94-year-old Cao Peng, a famous conductor who is dedicated to helping autistic children through music, led the audience in singing “Ode to the Motherland.”

Steven Weathers, an American anchor from International Channel Shanghai who has been living and working in Jing’an for years, joined a more recent expat to the city to sing three songs expressing their love for the city.

“Shanghai has become my second home. I feel a sense of belonging and comfort in working and living in Jing’an,” said Weathers. 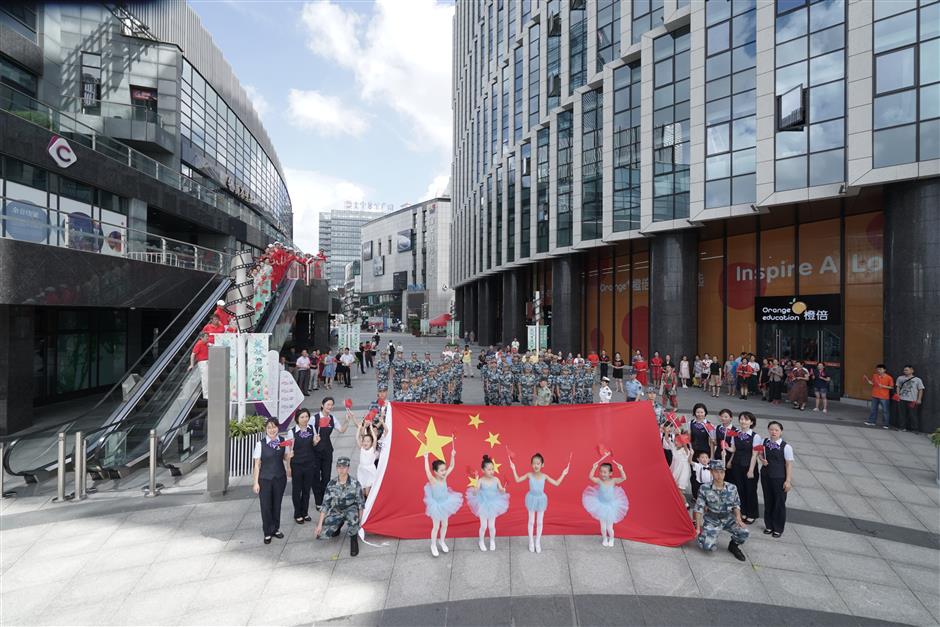 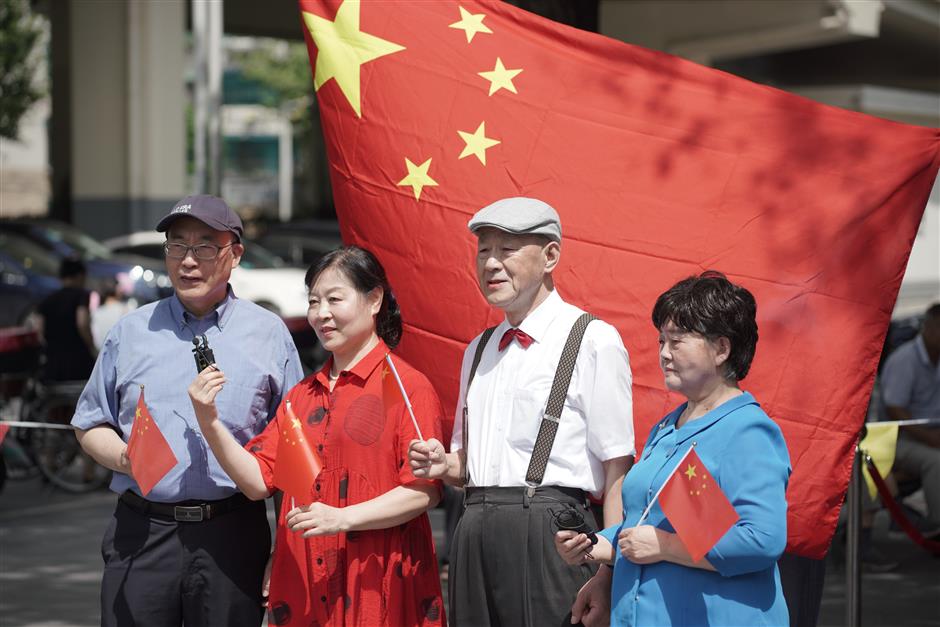 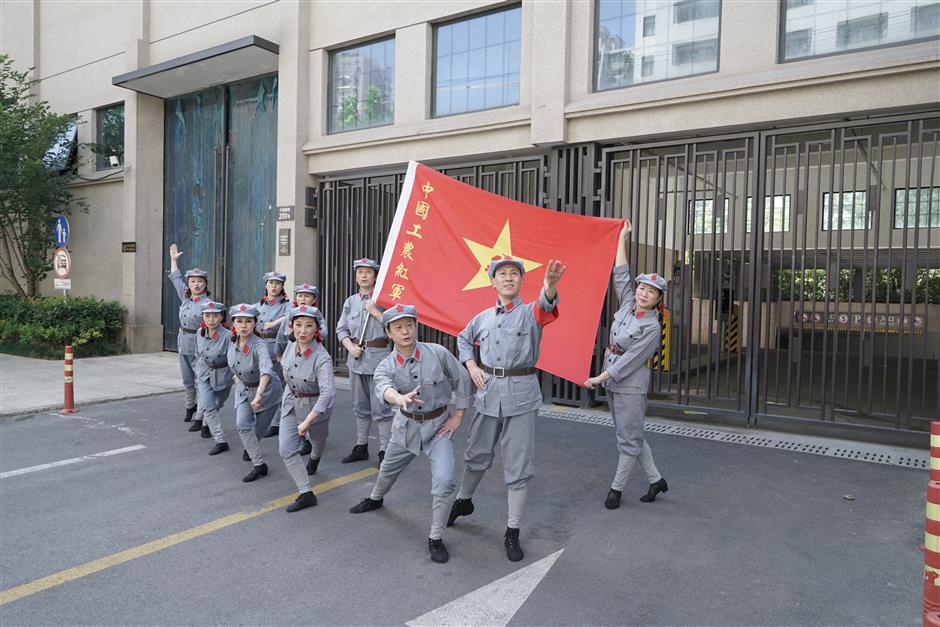 Local communities pull out all the stops

In communities across Jing’an, a “red telephone booth” has become a popular destination. The mobile reading pavilion, which is about the size of a telephone booth, gives people passionate about the spoken word an outlet to read aloud. They include retirees, children and district workers who recite famous poems, revolutionary stories and anything meaningful to them.

Renowned soprano Ren Guizhen went to the booth to read one of her favorite revolutionary poems, “My Confession” by revolutionary martyr Chen Ran, who was executed by the Kuomintang at age 26 in 1949.

“Only those who fear of death beg for freedom,” she read.

Zhou Shiqi, a police officer from the Caojiadu Subdistrict, read out the police oath. “I will devote my life to safeguarding people and my country,” he said. “I want to remind myself to never forget why I became a policeman.”

“The Red Army fears not the trials of the Long March,” he read, paying respect to the early revolutionary figures who trekked 25,000 kilometers on foot for military reasons.

Since July, the small red pavilion has traveled around Pengpu Town and 13 other subdistricts, including the bustling Jing’ansi commercial area and the riverside of Suzhou Creek. nearly 160,000 people have taken part in the activities. 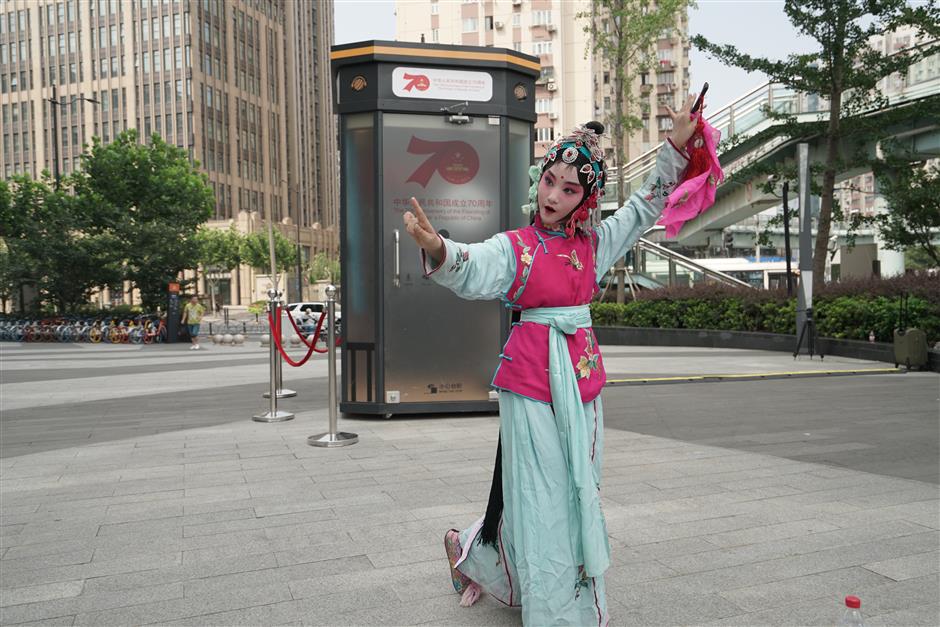 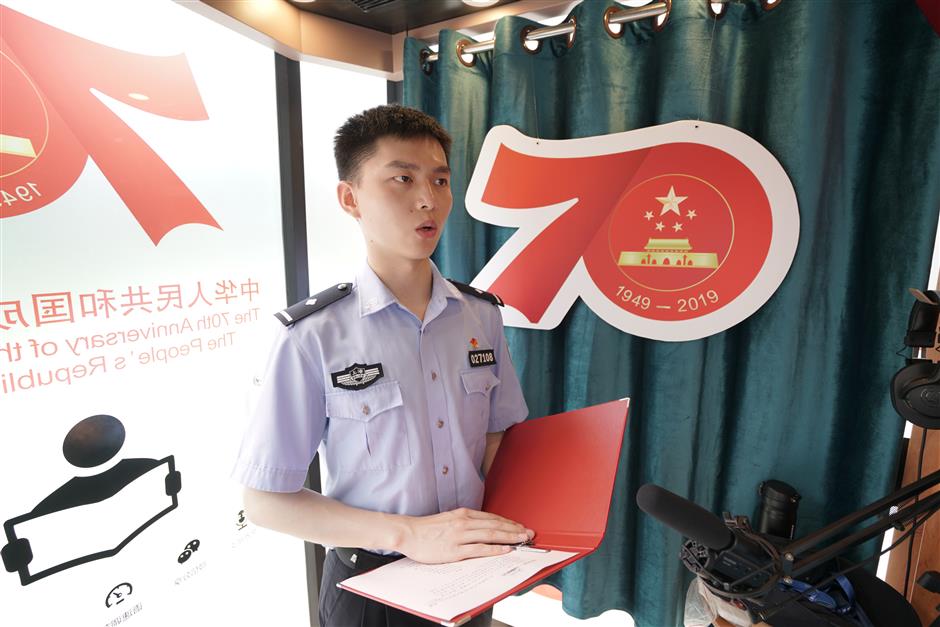 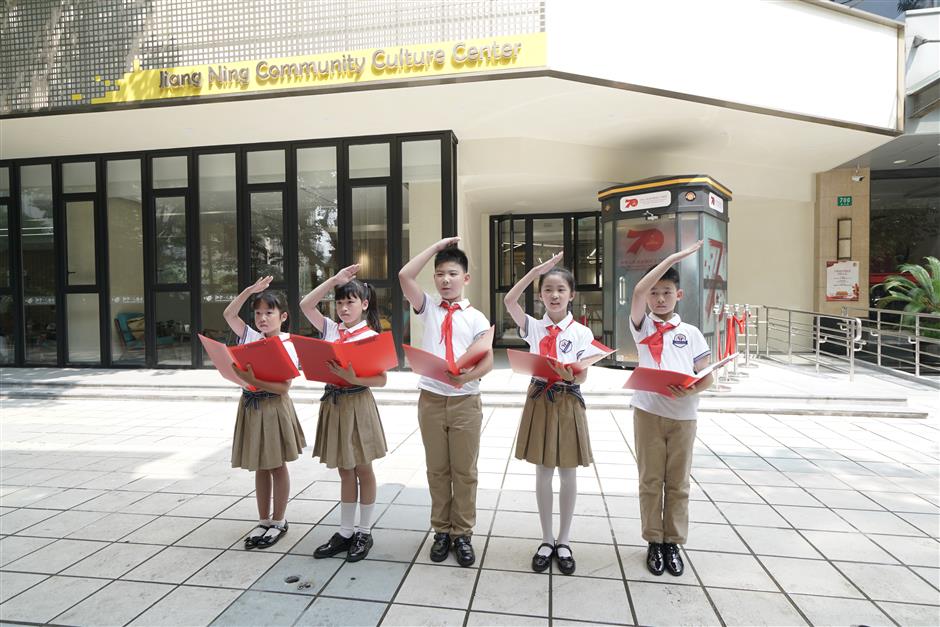