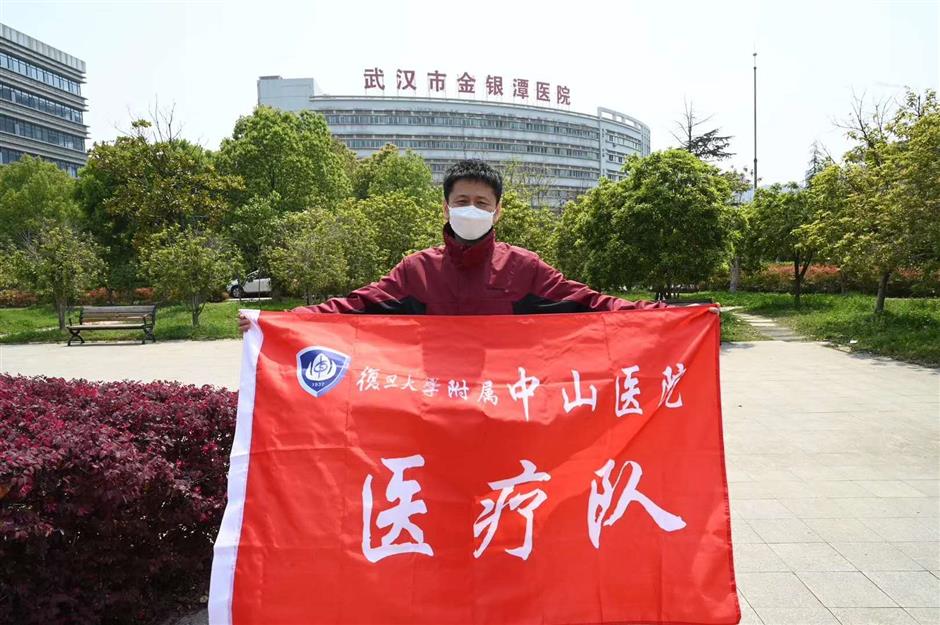 Zhong Ming, the first Shanghai medical expert who rushed to Wuhan to fight against the novel coronavirus, returned on Monday along with the city's eighth medical team from the once hardest-hit region in China.

Receiving orders from the national health commission, Zhong, an intensive care expert at Zhongshan Hospital, went to Wuhan in central China's Hubei Province alone on January 23, two days ahead of the Spring Festival.

He had been treating coronavirus patients in serious condition at Jinyintan Hospital, the first Wuhan hospital to treat COVID-19 patients, for 75 days.

A total of 471 Shanghai medical team members returned home on Monday. Apart from Zhong, other members from the eighth medical team are from Renji Hospital, Shanghai General Hospital, the Fifth and Seventh people's hospitals and Yangpu District Central Hospital.

They arrived in Wuhan on February 19 and fought against the virus at the Leishenshan Hospital, the second emergency hospital in Wuhan for coronavirus patients. The team treated a total of 326 patients, including 30 in critical condition and 123 in serious condition.

"Though we've retreated from Wuhan, the COVID-19 prevention work has yet to end and the situation remains severe and complex, so we cannot relax," said Zhang Jidong, vice president of Renji Hospital and the leader of the eighth team.

Fu Xiaofang, 59, is the oldest medical expert in the team. The director of Renji's infection department ensured the safety of all team members.

"My only hope was achieved today that everyone in the team would return home safely," said Fu, who will retire next year.

Her colleague Li Yi, 23, is the youngest among the team members. The nurse from Renji had been working overtime voluntarily since the outbreak of the COVID-19 epidemic in Wuhan.

"I feel the whole country has been united to get through this hard period," Li said.

Zhou Lingyi and Yu Jinghai, both Renji nurses, got married at Leishenshan Hospital on February 28. They had postponed their wedding ceremony to go to Wuhan together.

Witnessed by team leader Zhang and other members, the couple held a casual wedding ceremony on the sidelines of their busy work schedule.

"We spent our special, meaningful honeymoon to fight against COVID-19 together at the hospital," said Zhou. 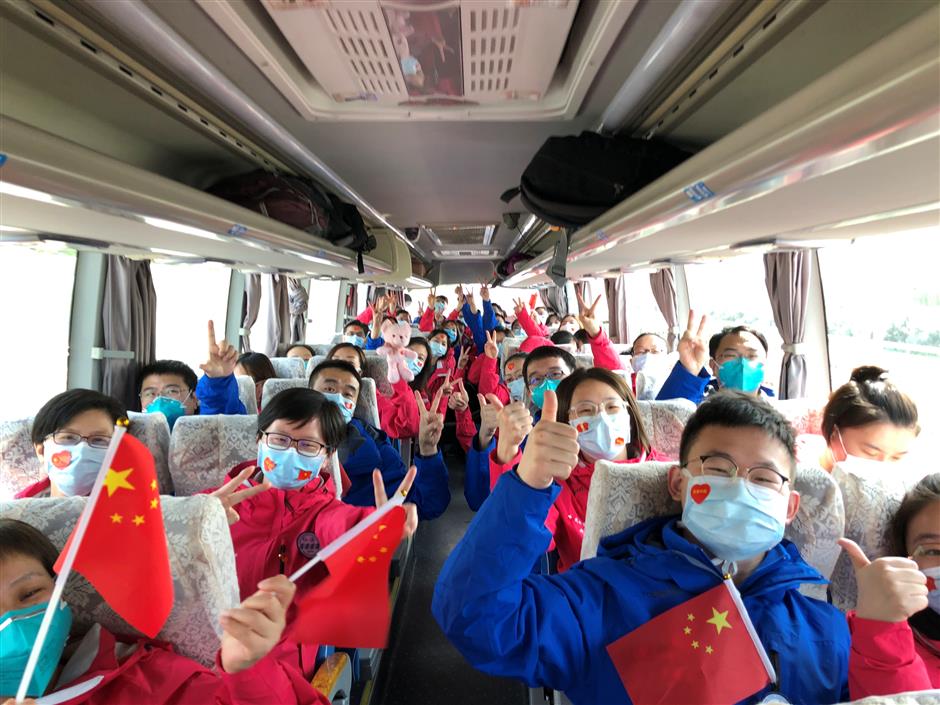 Members of the eighth medical team from Shanghai pose on a bus to the Wuhan airport on Monday. 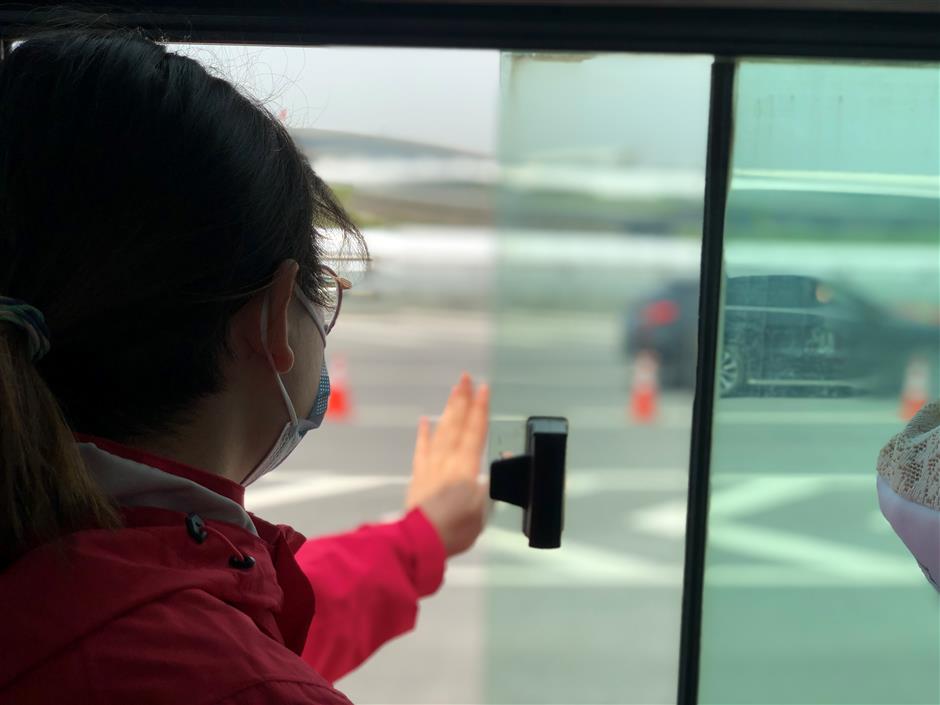 Hu Yu, an intensive care unit nurse with Shanghai Seventh People's Hospital and a Wuhan native, waves to her father.

After working at Leishenshan Hospital for 48 days, Hu Yu, an intensive care unit nurse from the Shanghai Seventh People's Hospital, left her hometown Wuhan and returned to her work in Shanghai along with the medical team.

Her father drove a private vehicle to follow the bus of Hu and her colleagues to see them off to the airport. Hu's brother and sister held a sign saying "Gratitude to Shanghai medical team" in the car.

Lin Yan, vice president of the Shanghai Seventh People's Hospital, said the experience in Wuhan had enhanced the skills of the team members. He led the 50-member team with the hospital to Wuhan as part of the eighth medical team.

The team from the seventh hospital caught public attention after a petition of Hu Shuangshuang, a young nurse with the hospital, became an online sensation.

"I applied to join the medical team to Wuhan with no regard for payment or death," Hu wrote in the letter to the hospital.

"I'm single and have no child. I have siblings to take care of my parents. I have had no worries behind and gained permission from my parents," Hu wrote.

The letter was shared by domestic media and touched many readers.

"Coming to Wuhan should be my bravest, most right and proud decision in my life," Hu said before returning to Shanghai on Monday.

When packing on Sunday night, Zhong found his luggage has been filled with gifts from Wuhan people. They include masks and hazmat suits from volunteers in Wuhan. A volunteer even cooked a bowl of soup for Zhong and other medical experts from Shanghai.

"I had mixed feeling, both relaxed and reluctant to leave Wuhan, because I've poured too much emotion into the city," Zhong said.

"I would like to thank all my colleagues working together in Wuhan though I cannot recognize most of them," he added.

After returning to Shanghai, Zhong said he would lead his team to further enhance the knowledge in preparation and skills.

"I'm eager to return to work, to spend a holiday and to feel the happiness of every normal day," Zhong said.

More than 40,000 medical professionals, including 1,649 from Shanghai, were dispatched to Hubei to fight against the COVID-19 outbreak.

Most of the medical workers from Shanghai have returned home, while the remaining 51 are still treating patients at the once epicenter of the outbreak in China. 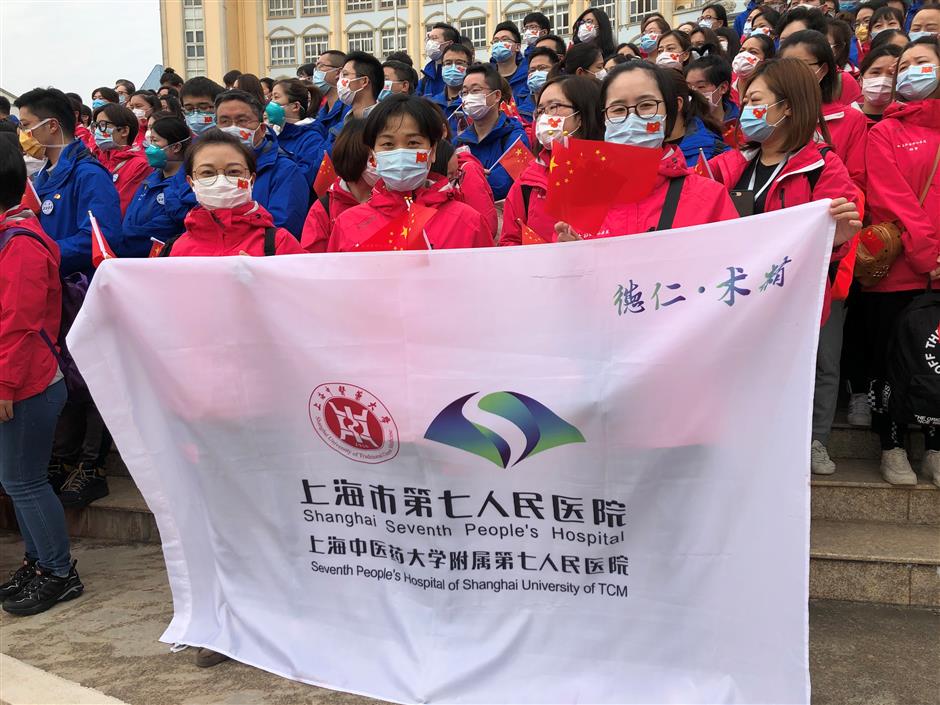 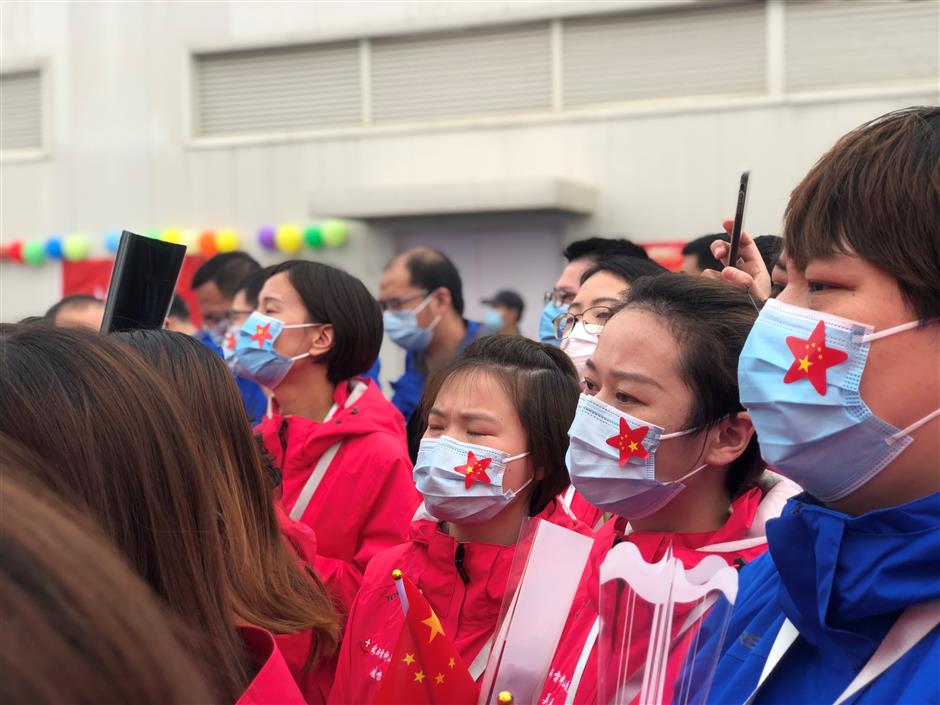 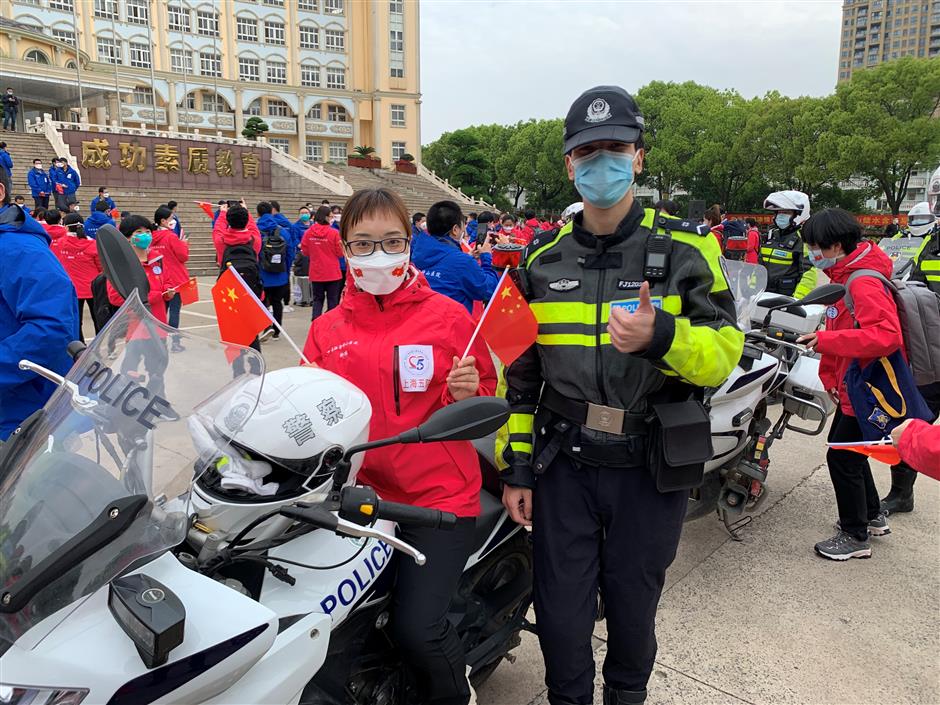 A Shanghai medical team member poses with a Wuhan police officer on Monday. 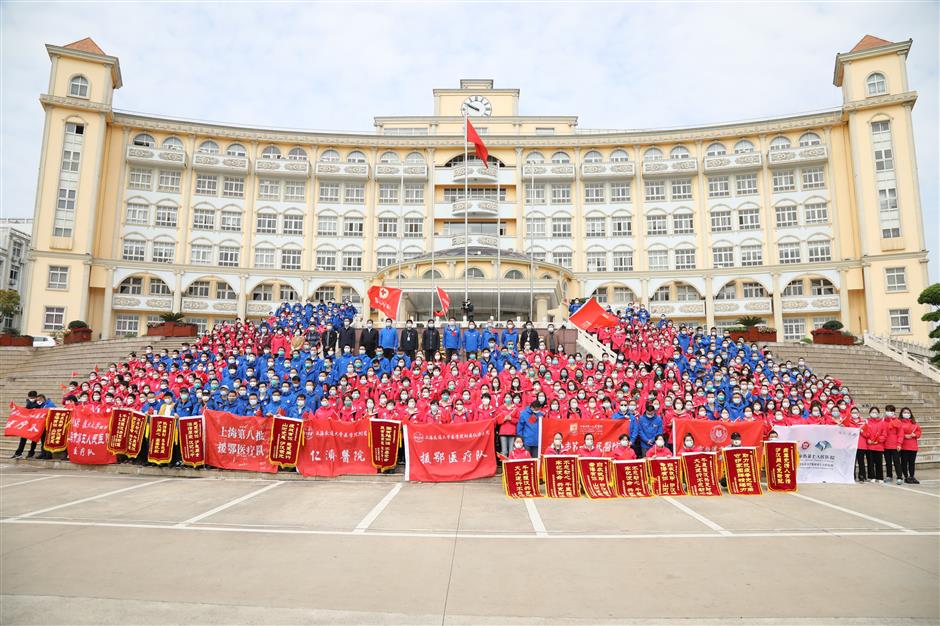 A group photo of the eighth medical team from Shanghai in Wuhan.