Fair is just the job for those seeking work 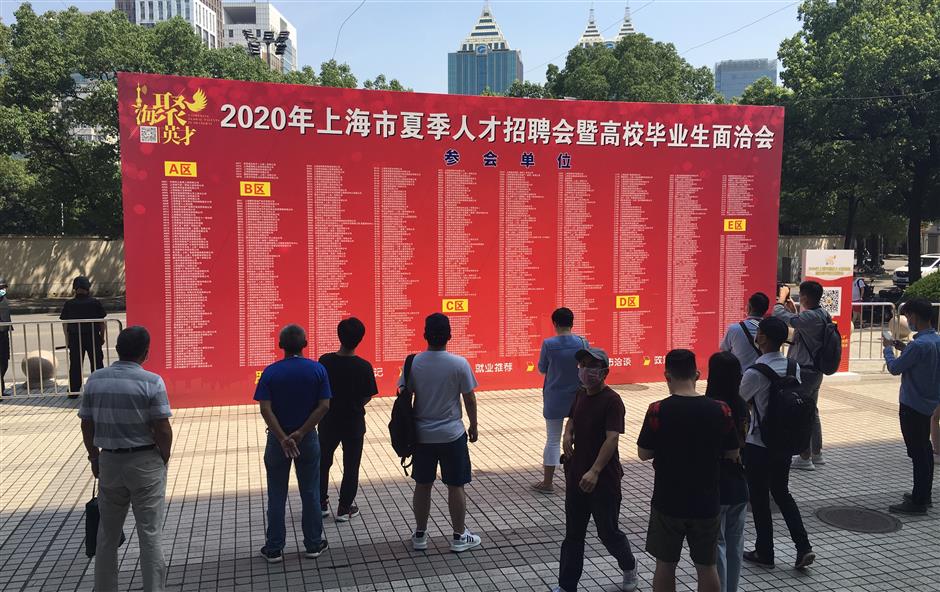 People check the list of 750 companies and institutions taking part in the job fair in Changning District on Saturday.

The city’s largest offline job fair this year was hosted by local government departments on Saturday at ShanghaiMart in Changning District.

It was the second offline job fair in Shanghai. The city organized the first in January but the March fair was cancelled because of the novel coronavirus outbreak, according to Ding Feng, director of the city’s talent service center.

There are 16,000 jobs offered by 750 enterprises and institutions, half of which are related to modern manufacturing, construction and computer software.

According to official statistics, over 4,000 people visited the job fair on Saturday and 2,257 applicants have reached initial attention from companies or institutions.

To reduce the risk of cross-infection from the virus, all visitors had to make an online appointment, have their temperatures taken, show their health QR codes at the gate of the fair, and wear masks inside. 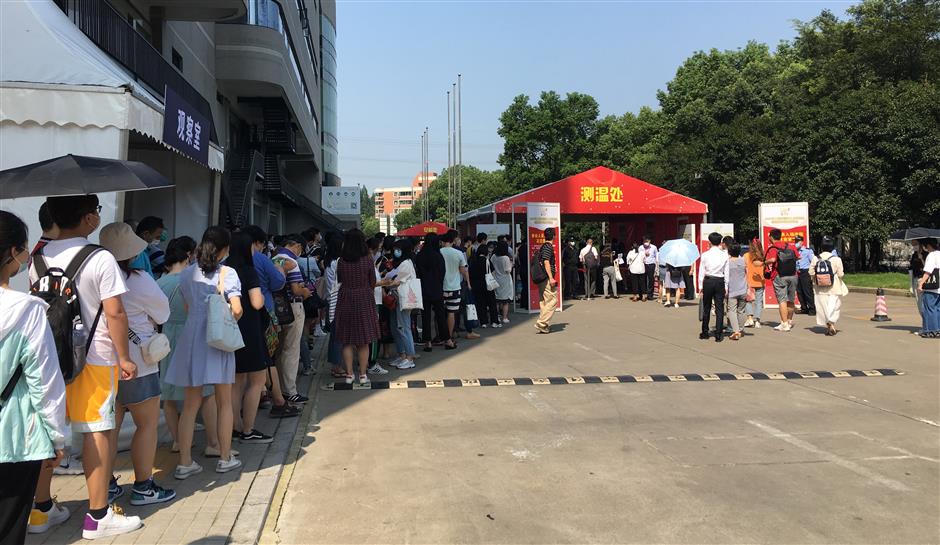 Those who could not attend the fair also can search for jobs and submit resumes on an official account (shrc-since1984) on Wechat, the authority said.

Many companies and institutions said it was their first time taking part in the offline job fairs since the outbreak.

“We have joined about eight online job fairs, not only organized by the government, but also by universities,” said an HR officer, surnamed Zhang, of time-honored Shanghai Guanshengyuan Food.

Ding said that due to the pandemic, district and town-level job fairs will be promoted. 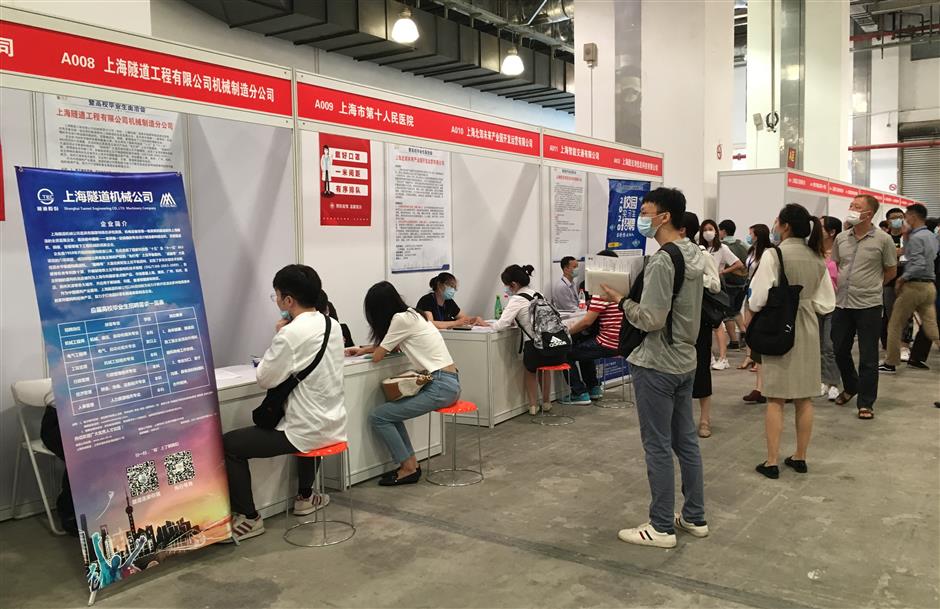 Ding also said many companies and institutes were preparing for the second-half of the year and have vacancies.

Zhang added they had provided more jobs than last year despite  the epidemic.

An interviewer from Xinyue Logistics also said the outbreak will not change the fact that the company is still eager to attract talented staff.

A graduate, surnamed Hu, from Shanghai University of Finance and Economics, said she came from Hubei, a province once hardly-hit by the coronavirus. Although this is the first job fair for her, she didn’t feel nervous about seeking a job because the majority of her university classmates have found work in Shanghai.

“There are many opportunities provided online and offline in the city,” Hu said.

As of now, the employment rate of this year's graduates is 84 percent, a decline 3.36 percent year on year, Mao Lijuan, deputy director of the  Shanghai Education Commission, said during Saturday’s opening ceremony of the job fair. 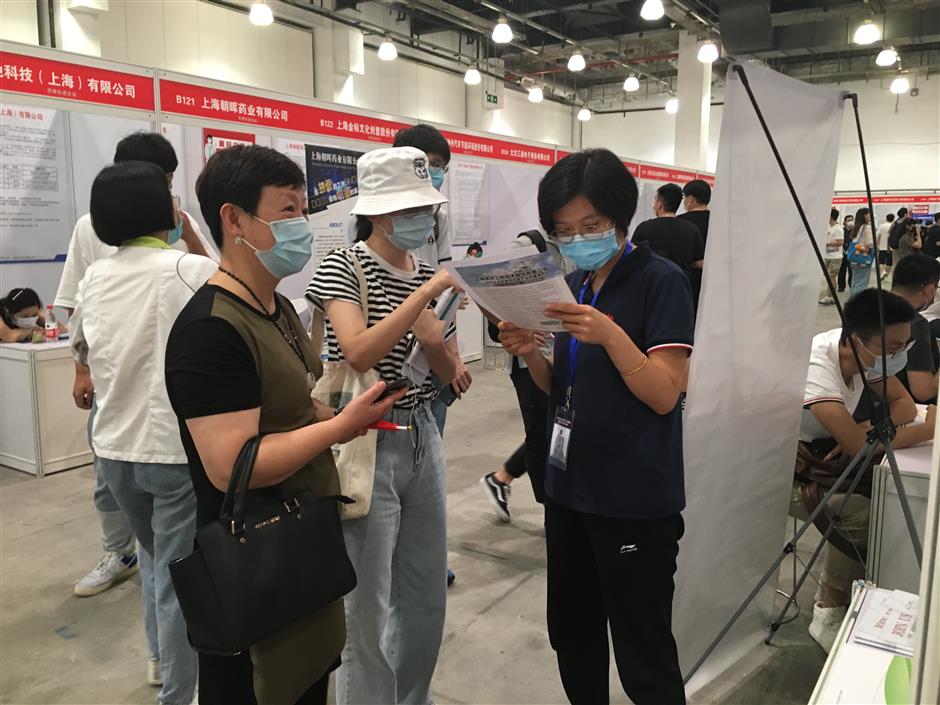 The fair also attracted other applicants.

Yu, a 28-year-old man, said he had quit his job at the beginning of the year but was now finding it hard to get another.

This phenomenon has been confirmed by an interviewer from the Shanghai Water Construction and Engineering. He said because of the pressure of looking for a job during the epidemic, some applicants reduced their requirements in some aspects.

Ding added: “Applicants don’t need to be worried about employment but reducing requirements is necessary."

He also said a shift in in seeking jobs is important. An art editor, for instance, doesn’t necessarily need to work for a design company. A hospital's media department could be a good place to find work.