Some Shanghai residents stepped out of their homes for the first time in more than two weeks on Tuesday, when the city reported its first decline in the number of COVID-19 infections and started to take tentative steps to ease a full lockdown for its 25 million-plus people.

Shanghai said on Monday that more than 7,000 residential units had been classified as "lower-risk areas" after they reported no new infections for 14 days, and their districts have since been announcing which specific compounds can be opened up.

The city reported 994 locally transmitted COVID-19 cases and 22,348 local asymptomatic infections on Monday, a first decline since April 1 and down 11 percent from a day earlier. 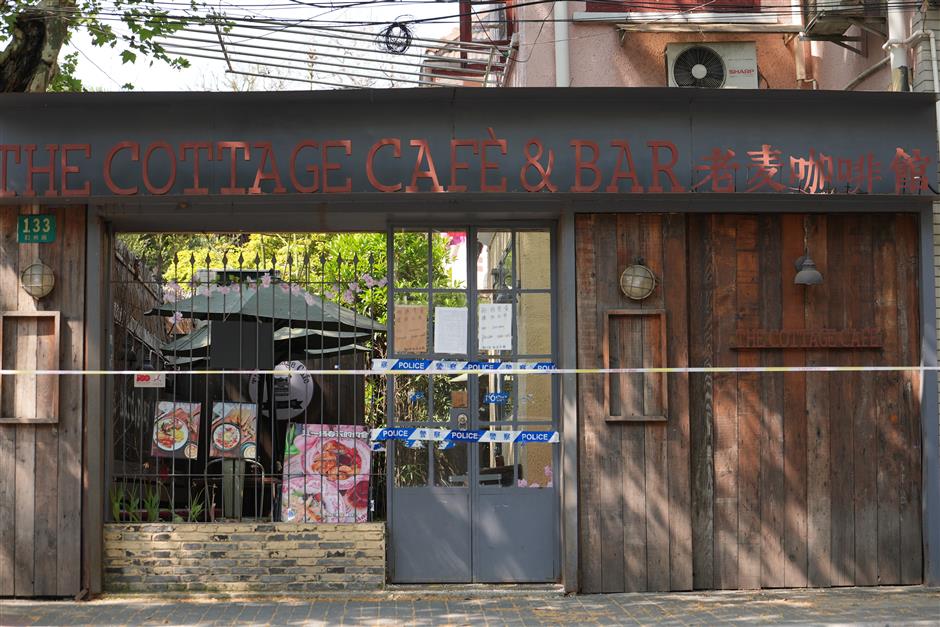 A cafe apparently ready for its Springtime promotion is in lockdown.

"After a long period of lockdown, it is understandable that people want to go out and get some fresh air, and they need to go shopping for food and medicine and go for medical treatment," she remarked.

"But if lots of people gather in a disorderly way, it will cause hidden dangers to our pandemic prevention work."

On a field trip, Shanghai Daily reporters saw people lining up outside convenience stores on Tuesday morning in the Xinhua Road community in Changning District, which has been categorized as a lower-risk zone. 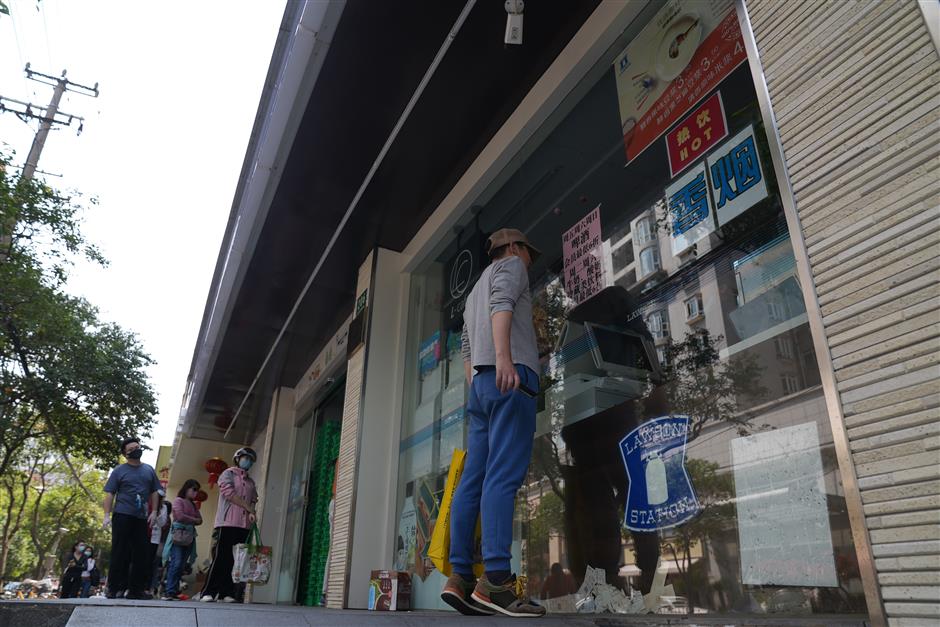 People queue outside a convenience store.

People were not allowed to go inside the stores and could only place orders to staff at the gate. Most people wore protective masks and were maintaining social distance. They were all told to return home immediately after getting their supplies.

Surprisingly, topping nearly everyone's shopping list were coke and beer, likely in celebration of the long-awaited easing of the lockdown.

"We got enough supplies from the government during the lockdown, but eating only carrot and radish for two weeks made me feel like a rabbit, this is what I was craving for for so long," a middle-aged resident noted, pointing to a full trunk of beers and vegetables on his moped.

However, residents seemed more cautious in areas where the population is older. In some residential lanes on Jiaozhou Road, people were out of their homes yet not going onto the streets even though they were in a lower-risk area.

A community worker, surnamed Hu, explained that because the residents in the lanes were mostly elderly people, they'd rather stay indoors until the whole city returns to normal.

Amid the lockdown, these seniors are being taken care of by Hu and her co-workers who deliver lunch and dinner every day to more than 800 people in the community aged above 70 years.

Hu and her co-workers take care of over 800 elderly people in the community.

"Nobody has tested positive in my neighborhood," she revealed.

Giovanni Vincenzi, an Italian music producer who has lived in the community for four years, insisted that everything was pretty smooth during the lockdown because the community and neighbors were always willing to help.

He admitted that the lockdown was a bit tough and psychologically stressful but "if we are united as a community, we can overcome any situation."