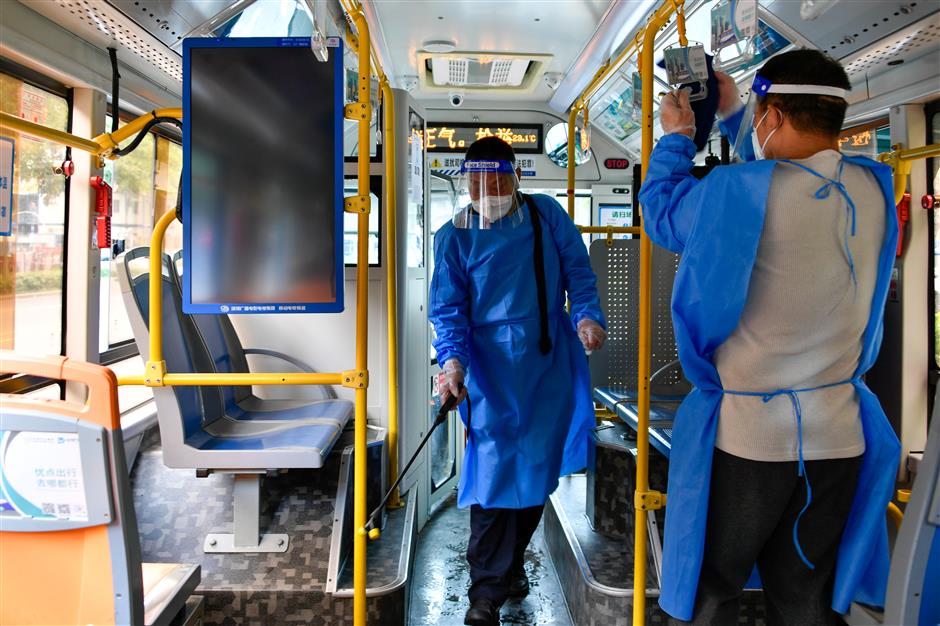 Workers disinfect a bus in Shenzhen, Guangdong Province, on March 13.

The major Chinese technology hub of Shenzhen, in southern Guangdong Province, will allow its firms to resume work in an "orderly" manner after the suspension of non-essential businesses in an effort to contain an outbreak of COVID-19, a city official said on Thursday.

Shenzhen, which is close to Hong Kong, saw local confirmed transmissions pick up to 71 on Wednesday from 55 the previous day. While the outbreak is small by international standards, authorities are leaving nothing to chance.

"On condition that the epidemic prevention and control work is done well, enterprises will resume production in an orderly way based on region and category," said Huang Qiang, deputy-secretary general of the Shenzhen government, at a news briefing, without providing details or specific timeline.

"We should be aware that the new daily case numbers so far still remain relatively high," he added. "There must be no loosening or slacking in virus control and prevention work."

Shenzhen is planning to test all of its residents three times during March 14-17. It has also suspended buses and subways as well as all non-essential economic activity in a weeklong containment program. Supermarkets, pharmacies and medical institutions were among the only businesses allowed to open.

Major firms in the city are already feeling the effects. Apple Inc supplier Foxconn plans to put its Shenzhen campus in a COVID-19 "bubble" that will allow it to resume production until at least Sunday, according to an internal document seen by Reuters.

Logistics company United Parcel Service Inc also suspended all pickup, delivery and self pickup services in Shenzhen and neighboring Dongguan after strict restrictions were imposed to curb the outbreak.

Chinese mainland's total local symptomatic COVID-19 cases declined for a second consecutive day on Thursday, after a flare-up in the northeast – the worst since China's first outbreak in 2020 – grew at a slower pace.