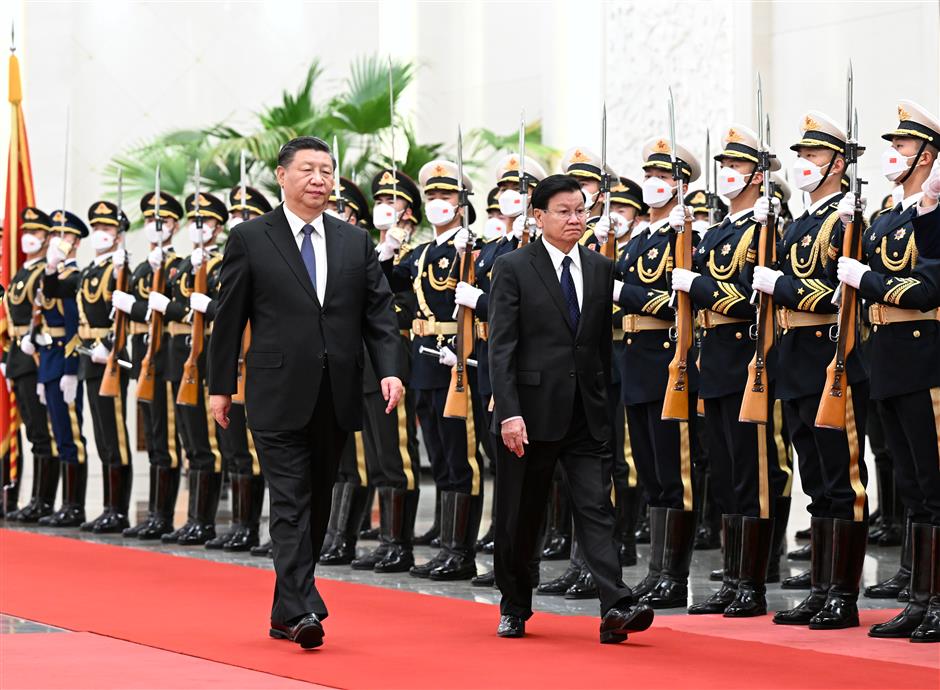 They stressed the need to uphold the principle of "long-term stability, good-neighborly friendship, mutual trust and all-round cooperation" and the spirit of "good neighbors, friends, comrades and partners" in developing bilateral ties.

At the beginning of the talks, Xi said that Comrade Jiang Zemin passed away on Wednesday in Shanghai due to illness after all medical treatments had failed.

Xi said Comrade Jiang was an outstanding leader enjoying high prestige acknowledged by the whole Party, the entire military and the Chinese people of all ethnic groups, a great Marxist, a great proletarian revolutionary, statesman, military strategist and diplomat, a long-tested communist fighter, and an outstanding leader of the great cause of socialism with Chinese characteristics. He was the core of the CPC's third generation of central collective leadership and the principal founder of the Theory of Three Represents.

"We profoundly mourn Comrade Jiang and will turn grief into strength to work in a concerted effort to build a modern socialist country in all aspects and advance the great rejuvenation of the Chinese nation in an all-round way in accordance with the plan of the 20th CPC National Congress," Xi said.

Thongloun expressed deep condolences over the death of Comrade Jiang, saying that it is a huge loss for the CPC and the Chinese people, and the LPRP and the Lao people feel the same way.

Thongloun said that Comrade Jiang was a close friend of the LPRP and the Lao people. During his visit to Laos in 2000, Jiang proposed the principle of "long-term stability, good-neighborly friendship, mutual trust and all-round cooperation," which has played a guiding role in the development of bilateral relations.

Thongloun said the Lao Party, government and people will work with the Chinese counterparts to continuously push forward the China-Laos friendship.

Xi said he is ready to work with General Secretary Thongloun to advance the building of a China-Laos community with a shared future, hailing the fruitful results since the signing of an action plan on this goal in April 2019.

The China-Laos railway has contributed to the well-being of the two peoples and set a good example for joint Belt and Road construction, Xi said.

Under the new circumstances, the two sides should keep bilateral relations in the right direction and enhance law-enforcement and defense cooperation, Xi said, adding that the two countries need to deepen synergy of development strategies and enhance partnership in science and technology, education, culture and other areas.

On economic and trade ties, Xi said China will encourage more Chinese companies to invest in Laos and welcome more quality products from Laos to enter the Chinese market.

China is ready to deepen coordination and cooperation with Laos within the frameworks of Lancang-Mekong cooperation and China-ASEAN cooperation, he added.

Presenting the key outcomes of the 20th CPC National Congress, Xi said the CPC has the confidence and capability to make new and greater achievements and accomplish all the goals set at the congress. Xi also expressed confidence that under the strong leadership of the LPRP Central Committee led by General Secretary Thongloun, the Lao people will surely achieve all the goals put forward at the 11th LPRP National Congress.

Xi said the CPC is ready to work with the LPRP to strengthen solidarity, cooperation, exchanges and mutual learning, adhere to the people-centered development philosophy, strengthen confidence in taking the socialist path and jointly explore a new path for modernization.

For his part, Thongloun said that the 20th CPC National Congress is a major event in the new era for China and will have a major impact on world development. He thanked China for its long-term support and help for Lao economic and social development.

It is hoped that the two parties and relevant departments and institutions of the two countries will strengthen exchanges on national governance, consolidate security and defense cooperation, strengthen practical cooperation and people-to-people exchanges, Thongloun said.

After the talks, Xi and Thongloun jointly witnessed the signing of cooperation documents on political parties, economy and trade, finance, culture and education, and local government.