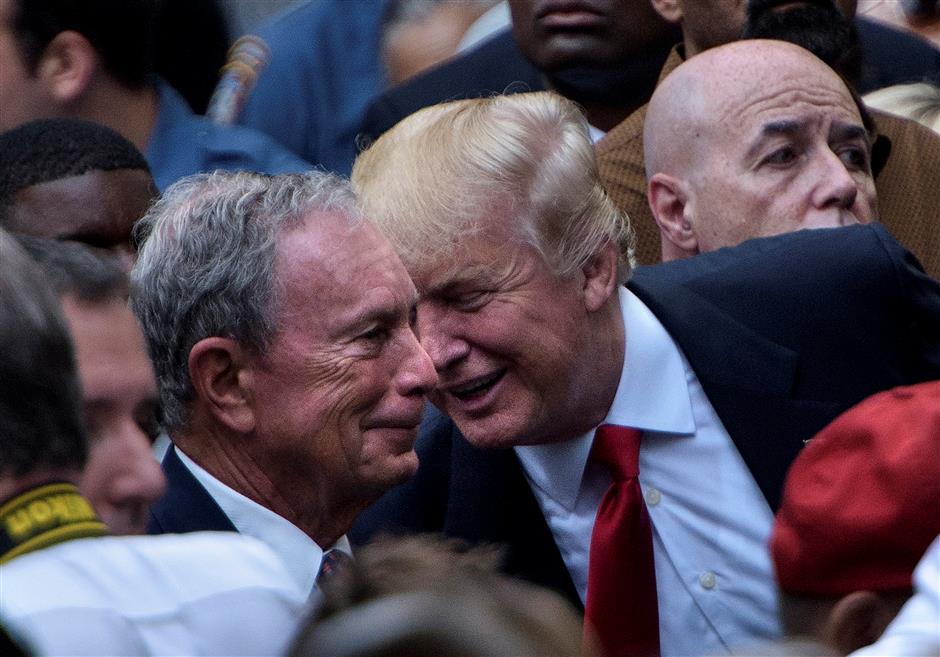 In this file photo taken on September 11, 2016, US Republican presidential nominee Donald Trump speaks to former New York City Mayor Michael Bloomberg during a memorial service at the National 9/11 Memorial in New York.

US President Donald Trump's re-election campaign announced on Monday that it would ban reporters with Bloomberg News from attending its rallies and other campaign events.

The decision was in response to the media organization's recent announcement that it would not investigate its boss, Michael Bloomberg, or his rivals seeking the Democratic Party's nomination to take on Trump in 2020.

"We will determine whether to engage with individual reporters or answer inquiries from Bloomberg News on a case-by-case basis," the campaign manager Brad Parscale said in a statement. "This will remain the policy of the Trump campaign until Bloomberg News publicly rescinds its decision."

Bloomberg editor-in-chief John Micklethwait said in a statement later that the media outlet has "covered Donald Trump fairly and in an unbiased way since he became a candidate in 2015 and will continue to do so despite the restrictions imposed by the Trump campaign," he said.

Micklethwait announced last week in a memo to staffers that the media outlet won't do in-depth investigative reporting on Bloomberg or his rivals as its billionaire owner had jumped into the race.

The news outlet explained that the move was in keeping with its practice of not investigating Bloomberg, like when he was the mayor of New York, and it extended the policy to his Democratic rivals out of fairness, the publication said.

Bloomberg News, according to Micklethwait, will still investigate the Trump administration, calling it "the government of the day." The policy could change if Bloomberg were to win the nomination, Micklethwait added.

Trump's 2016 campaign, citing unfair coverage, barred a number of outlets from officially covering its events, including BuzzFeed and Politico.