Trump in London for NATO summit amid election race 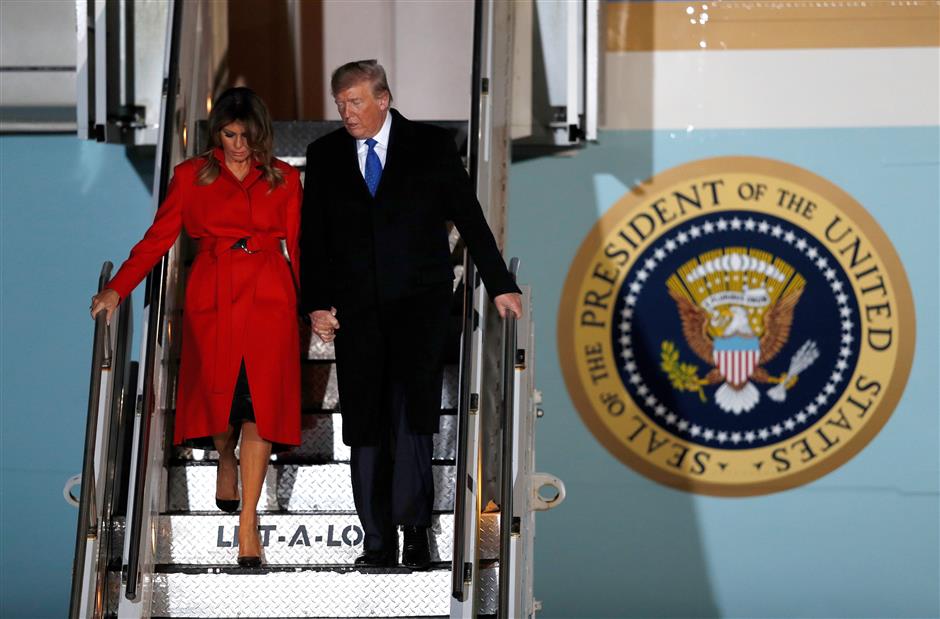 US President Donald Trump and US First Lady Melania Trump disembark Air Force One after landing at Stansted Airport, northeast of London, on December 2, 2019.

US President Donald Trump landed in Britain on Monday ahead of the NATO summit, arriving in London just 10 days before a crucial general election.

En route, Trump boasted that he had convinced European allies to boost their defence spending, tweeting: "Since I took office, the number of NATO allies fulfilling their obligations more than DOUBLED."

Fellow NATO leaders will be relieved that Trump, who derailed last year's summit agenda with his demands, appears to be satisfied with how the allies have stepped up their military investment.

But Britain's Prime Minister Boris Johnson will still be nervous that Trump's presence will hurt him in the closing stages of the British election campaign.

The pro-Brexit premier is the favorite in the opinion polls to win a majority in next week's vote, but opposition Labour leader Jeremy Corbyn has attacked him for his closeness to Trump.

In particular, Labour campaigners have warned that Johnson is ready to grant US drug firms more profitable access to the UK National Health Service in exchange for a US trade deal.

Air Force One landed at Stansted Airport outside London and the president and his wife, First Lady Melania Trump, set off in a motorcade for Winfield House, a stately residence in central London.

The US leader is due to hold a number of bilateral meetings alongside the main summit over two days, and to attend dinner with Queen Elizabeth at Buckingham Palace on Tuesday.

Back in Washington, the political news is dominated by attempts by opposition lawmakers to impeach Trump, accused of misusing his office to bully Ukraine into providing dirt on a domestic rival.

"It's an absolute disgrace what they're doing to our country," he said. "The whole thing is a hoax. Everybody knows it."