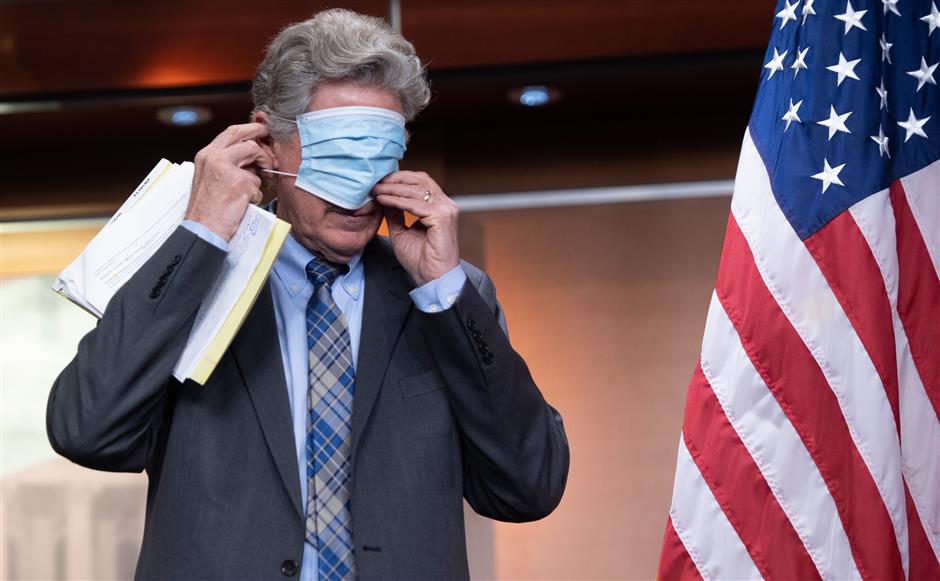 US Representative Frank Pallone, Democrat of New Jersey, puts on a mask during a press conference about COVID-19 testing on Capitol Hill in Washington, DC, May 27, 2020.

The US surpassed a jarring milestone on Wednesday in the coronavirus pandemic: 100,000 deaths.

That number is the best estimate and most assuredly an undercount. But it represents the stark reality that more Americans have died from the virus than from the Vietnam and Korean wars combined.

“It’s a striking reminder of how dangerous this virus can be,” said Josh Michaud, associate director of global health policy with the Kaiser Family Foundation in Washington.

The once-unthinkable toll appears to be just the beginning of untold misery in the months ahead as Las Vegas casinos and Walt Disney World make plans to reopen, crowds of unmasked Americans swarm beaches and public health officials predict a resurgence by fall.

“We have a situation in which you see that type of crowding with no mask and people interacting. That’s not prudent, and that’s inviting a situation that could get out of control,” he told CNN. “Don’t start leapfrogging some of the recommendations in the guidelines because that’s really tempting fate and asking for trouble.”

Worldwide, the virus has infected more than 5.6 million people and killed over 350,000, with the US having the most confirmed cases and deaths by far, according to a tally by Johns Hopkins University. Europe has recorded about 170,000 deaths, while the US reached more than 100,000 in less than four months.

The true death toll from the virus is widely believed to be significantly higher, with experts saying many victims died of COVID-19 without ever being tested for it.

Early on, President Donald Trump downplayed the severity of the coronavirus, likening it to the flu, and predicted the US wouldn’t reach 100,000 deaths.

Critics have said deaths spiked because Trump was slow to respond, but he has contended on Twitter that it could have been 20 times higher without his actions. He has urged states to reopen their economies after months of stay-at-home restrictions.

SeaWorld and Walt Disney World plan to reopen to limited numbers of tourists in Orlando, Florida, in June and July.