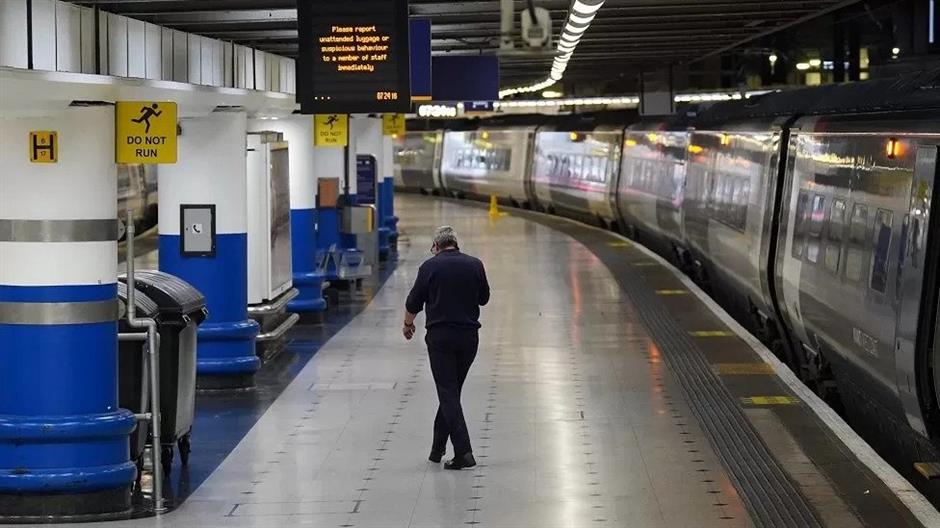 Railway staff in Britain on Thursday staged the latest in a series of strikes, once again disrupting commuters and leisure travellers.

Railway staff in Britain on Thursday staged the latest in a series of strikes, once again disrupting commuters and leisure travellers, as decades-high inflation hits salaries and prompts walkouts across various industries.

The latest action by rail workers, which will be repeated on Saturday, is part of a summer of strike action by the sector and others at a scale not seen since the 1980s under former prime minister Margaret Thatcher.

The dispute over pay rises and working conditions has shown little sign of resolution and is likely to be exacerbated by news this week that UK inflation topped 10 percent in July for the first time since 1982.

The global impact of the war in Ukraine on energy and food prices, and, to a lesser extent, post-Brexit trade frictions are blamed for the surging cost-of-living crisis in Britain.

Tens of thousands of railway staff are set to walk out over the two days, leaving a skeleton train service and stranding holidaymakers and commuters, even if home-working continues for many office staff after COVID restrictions were lifted.

"It's extremely unreliable these days, so I'm finding I'm having to drive, park and pay a lot more," recruitment consultant Greg Ellwood, 26, told AFP at an unusually quiet Euston station in London.

"We're all just trying to make a living and get by... So I've got all the sympathy in the world for them," he added, referring to the strikers.

Among the sectors also calling strikes are dockers at Felixstowe, Britain's largest freight port situated in eastern England, who will start an eight-day stoppage Sunday.

The waves of industrial action could continue into the autumn, since the Bank of England forecasts inflation will top 13 percent later this year, tipping the economy into a deep and long-lasting recession.

"We will continue to do whatever is necessary to defend jobs, pay and conditions during this cost-of-living crisis," Sharon Graham, head of major British union Unite, said this week.

"This record fall in real wages demonstrates the vital need for unions like Unite to defend the value of workers' pay," Graham said.

She hit out at suggestions, including from BoE governor Andrew Bailey, that pay rises were in part fuelling inflation.

"Wages are not driving inflation," she insisted ahead of the latest UK inflation data that showed rocketing food prices were the main factor behind July's spike.

Inflation has soared worldwide this year also on surging energy prices, fuelled by the attack of Ukraine by major oil and gas producer Russia.

Mick Lynch, general secretary of the Rail, Maritime and Transport union (RMT), urged the UK government to get involved in talks over pay, jobs and conditions.

"Instead of waging an ideological war against rail workers, millions of voters would rather that the Government allow for a fair negotiated settlement," he said at a picket line at Euston.

But a transport department spokesperson blamed union leaders like Lynch for inflicting "misery" on millions, urging them to work with industry "to agree a deal that will bring our railways into the 21st century".

Some proposed strikes planned for the British summer have been halted after unions and companies agreed pay deals at the eleventh hour.

But while British Airways ground staff and plane refuellers at Heathrow airport have scrapped proposed walkouts, other sectors are holding firm.

More than 115,000 British postal workers employed by former state-run Royal Mail plan a four-day strike from the end of August.

Telecoms giant BT will face its first stoppage in 35 years and walkouts have recently taken place or are soon to occur by Amazon warehouse staff, criminal lawyers and refuse collectors.

It also claimed, however, that "the vast majority" of companies "can't afford large enough pay rises to keep up with inflation."

Analysts are forecasting sector-wide stoppages to last beyond the summer as inflation keeps on rising.

It comes as teachers and health workers have hinted at possible walkouts should they not receive new pay deals deemed acceptable.