The Chinese Super League (CSL) 2022 season, the top-tier professional association football league in the country, kicked off at the beginning of this month. Most of the league's clubs are three or four matches into the campaign, but for the third straight season, teams are playing away from their home stadiums in controlled environments due to pandemic control measures.

This year, the league's 18 teams are split into three groups of six, with each group in a city or area playing each other in empty stadiums. Later in the season, groups will be reshuffled to ensure all teams face each other twice.

Given the circumstances surrounding the pandemic, this may be the best way to ensure fair competition across the league this season. However, for the CSL, which debuted in 1994 as the Chinese Jia-A League, and for its fans, the three-year absence of supporters in the stands has come at a cost.

First, let's take a brief look at the league's history to understand its present state. Prior to 1980, football clubs participating in China's national league were strictly amateur teams run by local sports and culture committees.

During the 1980s, however, companies secured the right to sponsor local semi-professional clubs, and in 1987, the national league established the Jia-A division, or its top semi-pro level of competition. Liaoning Dongyao, now known simply as Liaoning FC, became China's first professional club in 1988, and several more followed suit over the next few years. The Chinese Football Association (CFA) then decided the Jia-A league would become China's first fully professional football league for the 1994 season.

The league's inaugural season featured 12 professional clubs spread out across the country. Fan interest was substantial, as the league's 132 matches were attended by more than 2.15 million spectators.

So support for CSL clubs and football in China has always been significant. When I first arrived in Shanghai, I'd often see people on the Metro, in the street or elsewhere, in blue football shirts sporting a logo with which I quickly became familiar – Shanghai Shenhua FC. As an avid sports fan and someone who loves to watch live sporting events at stadiums and arenas, I decided to adopt a local team here in Shanghai to support and cheer on from the grandstands.

As many of you may know, there are currently two Super League teams in Shanghai – the aforementioned Shenhua, and also Shanghai Port (which was at the time called Shanghai East Asia and later Shanghai SIPG). In order to decide whether I'd don Shenhua's blue or East Asia's red kit, I planned to attend a home match for each club and make my choice based on how I felt about each stadium's atmosphere, fan culture and the general feeling I got from the experience.

As it turned out, the second trip proved to be unnecessary, because after just one match at Hongkou Football Stadium, Shenhua's home digs, I'd already made up my mind. The sea of blue-clad supporters shouting full-throated chants in both Mandarin and Shanghainese, the 30,000-seat stadium packed to the gills with enthusiastic fans, and the flag-wavers and drum-beating chant leaders egging everyone on to shout for the boys in blue all made the decision easy. 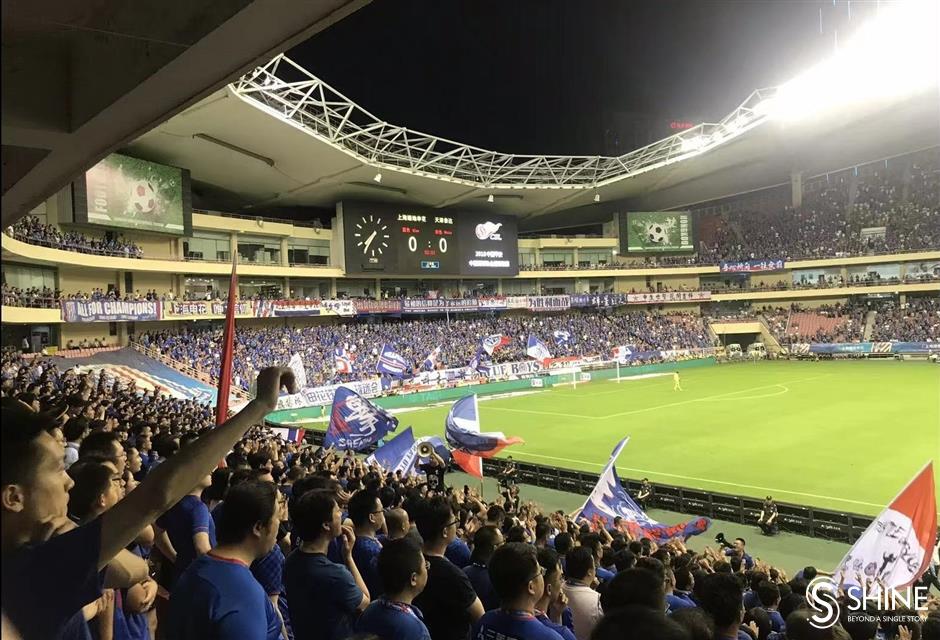 Avid Shanghai Shenhua fans, calling themselves Blue Devils, cheer for their beloved team during a home match against the then Tianjin Teda at Hongkou Football Stadium in July 2018. Shenhua won 1:0.

Growing up attending NBA, NFL and Major League Baseball games in the US, I'm not sure whether or not I expected something similar to that level of energy for supporting professional sports clubs, but I certainly was not disappointed. Sorry, Port fans, but you had no chance with me. The choice had been made.

In the years thereafter, I progressed from a relatively casual fan who'd attend a match once a month or so, to a more dedicated supporter who'd mark each game on my calendar and try to make it to as many as possible. By 2016, I'd become a full-on fan who'd schedule my plans around each contest, never miss a home game, and even make the occasional trip to away matches in cities like Nanjing, Hangzhou and Shenzhen.

By 2017, I'd become friendly with several members of the team's local fan association, the Shenhua Lanmo (Blue Devils) club. In 2018, I became a member myself, joining a small faction of the group called the Shenhua Element Crew. The SEC is a tightly knit international group of the Blue Devils club that consists of die-hard supporters not only from Shanghai but from all corners of the world who come together to attend matches at Hongkou stadium. It's a group I'm extremely proud to be part of, and the friendships I've made through it transcend football altogether.

Through the years, we've experienced the highs and lows of sports fandom. Exhilarating wins, crushing losses, intense rivalries (Shenhua's battles with Beijing Guo'an are very passionate indeed) and lasting memories have made my time watching the Super League and Shenhua FC a joyous one.

The past three years, though, have lacked much of that same spark that made the CSL such a fun league. While watching most away games on television or online was always a regular practice, having to view each and every match from the sofa at home, or, prior to the recent surge, in a restaurant or other venue, has sapped some of the fervor from many fans.

This is especially true this season, the third such year in a row. Many hardcore fans, like most of the Blue Devils and SEC members, still set their alarms to make sure they watch each match and cheer on the team. However, it's undeniable that many casual fans who, in years past, turned up to matches just for fun and to enjoy the atmosphere, aren't tuning in to watch the team play in front of empty stadiums hundreds or thousands of kilometers away

The Blue Devils cheer for Shenhua during a home match against hardcore rival Beijing Guo'an in July 2018. It ended in a draw of 2:2.

Additionally, many football fans in China, casual or dedicated, also enjoy watching other leagues around the world on TV, such as England's Premier League, Italy's Serie A, Spain's La Liga, and Germany's Bundesliga. With the CSL currently a TV-only product, its competition for the eyeballs of football fans in China is much stiffer.

Since the pandemic broke out in 2020, many clubs have suffered financially. A lack of gate receipts and decreased viewership has led to some struggles, and unfortunately, this among other factors has caused some clubs, such as those in Nanjing, Chongqing and Qingdao at the Super League level and others in lower divisions, including the aforementioned first pro club Liaoning FC, to cease operations.

Moreover, the situation has made it difficult for some of the league's international players to remain with their clubs due to travel restrictions and quarantine requirements if they choose to compete internationally representing their home nations or otherwise travel abroad. Because of this, many CSL clubs have relinquished some or all of their international stars to clubs in other countries.

It is an unfortunate side effect of China's strong efforts to curtail COVID-19 that the Super League has sustained some damage to its brand. But it's not all doom and gloom for fans of the league's teams.

For Shenhua fans, the team is actually off to a strong start this season, earning two wins and a hard-fought draw through the first three matches, including a 2-0 defeat of cross-town rival Shanghai Port.

For Port fans, though the season hasn't started off swimmingly for the club, which has enjoyed great success over the past few seasons, the impending return of star players such as Oscar and Aaron Mooy provides plenty of reason for optimism.

And for fans of other clubs and of the league as a whole, there is hope that once COVID-19 finally comes to a close, the gates of our favorite stadiums – and in the case of Shanghai Port, the yet-to-be-used Pudong Football Stadium, their new home – will swing open again. And when that day comes, fans will flood back onto the terraces again, ready to release several seasons of pent-up energy and gusto.

It may take a little more time for the casual fans to come back around, but hopefully they will, and perhaps a new wave of supporters will be born from the CSL's return to China's stadiums. Until then, we'll be watching on television and waiting with bated breath for the chance to return to the terraces once again.

The Oriental Pearl TV Tower, a Shanghai landmark, is lit up in blue after Shanghai Shenhua won the 2019 Chinese FA Cup.