Between the bands: How colors translate cross-culturally

As Shanghai's summer swings into full gear, we oscillate between sweltering sunny weather and rain-soaked stretches that often last for several days on end. For most, it isn't the most pleasurable season of the year. I know that's particularly true for those who work in offices where suit-and-tie formal attire is mandatory, as I once did.

Occasionally, though, a short-lived but thunderous rainstorm will blow through at this time of year, bringing with it a downpour that might only last an hour or two, followed by the return of intense sunshine. This, of course, can at times birth a rainbow, which is a relatively rare sight in Shanghai.

At the end of last month, we were gifted with exactly that ― a massive, bright double rainbow arched over the city, producing some spectacular photographs. 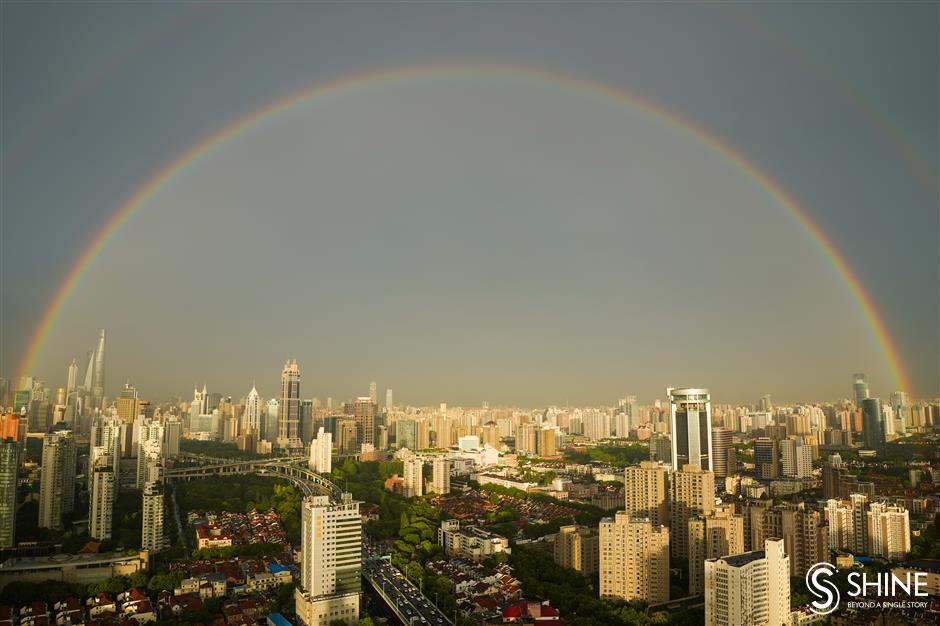 A massive double rainbow is seen arched over Shanghai after a thunderstorm on June 29.

It also got me thinking about the colors of the spectrum and how we conceptualize them across cultural lines. While the meanings and implications of some colors can be clearly tied to nature and are similar worldwide, others are more subtle and, in some cases, one color might have an opposing connotation from that in another part of the world.

Obviously, the first color we think of is red when considering China. We all know that red is China's most auspicious color. We see it everywhere, on buildings, clothing, the national flag, and of course hongbao, the red envelopes with bills stuffed inside exchanged during Chinese New Year holiday, weddings and other important events. The 100-yuan notes inside are red as well.

The most memorable scenes of red for me, though, are from traveling to smaller cities around China and arriving late at night. Many city skylines are dominated by deep red lighting from signs atop buildings, so during the rides from the airports into these towns, red lights illuminate the foggy night sky in a striking crimson hue.

In Chinese nowadays, describing something as "red" usually means that it is very popular or trending, particularly as it relates to the Internet or social media. If a vlogger or TikToker is "red," their popularity is at its peak.

Red clothing is traditionally worn during one's year of birth on the Chinese zodiac, or benmingnian. For example, for someone born in the Year of the Tiger, wearing red clothing during this year and subsequent tiger years is auspicious.

Red is also commonly worn at traditional weddings, as opposed to white, which is more common in many Western countries.

Customarily, though, in China, white is actually more common to see at a funeral than a wedding, as white represents death or the afterlife and is the color of mourning. This tradition began during dynastic times and continued for millennia. Of course, white also represents cleanliness and purity, creating a juxtaposition and giving white a more complex position in the color pantheon.

In modern speech, when white is used as an adverb to describe an action, it means it was done in vain, for example:

Black, not white, is the solemn color in the West worn at funeral processions. Emptiness or finality can be expressed equally by either color. The association of black with evil or nefarious forces is cross-cultural, though. Terms like "black market" or "black sheep" in English comport with Chinese idioms as well, where activity described as black usually describes something illegal or immoral.

Green's meaning is also quite apparent; as the color of the majority of plant life, it is naturally associated with vitality and the coming of spring across cultures. Its ties to nature and the origins thereof are obvious ― grass is green the world around and has been since prehistoric times. In China, it's also seen as a soothing color, and as the color of jade, it also commands reverence.

Just be sure never to wear a hat that's green in China, as this color of headwear carries a particular negative connotation that might lead to some unwelcome snickers or sideways glances. It seems like a perfectly innocent item of clothing, but I've learned to opt for a white or black version of the Boston Celtics NBA cap instead of their primary green one.

Yellow is another auspicious color here, as it was traditionally the color emperors wore, and in some cases, only the ruler of the land was permitted to wear it. Similarly, the pronoun "zhen" was also restricted to the emperor using it to refer to himself as the sovereign leader. Yellow is symbolic of wealth and power but also of the mandate of heaven.

The color represents heroism as well, as opposed to in the West, where in many stories and usages, yellow has negative connotations. Someone who is "yellow-bellied" or has a "yellow streak" is a coward or traitor, and "yellow press" refers to publications like tabloids that merely sensationalize for shock value rather than report information.

As with many terms today, yellow also has an online meaning as well, and in China, describing something as yellow can mean risque or suggestive in nature. Contrastingly, in many Western countries, this type of racy joke or material is said to be "blue."

These color associations, as far as I can tell, have no affiliation with nature at all. Some are clear, some are mysterious.

So if a "red" celebrity with a red face and a yellow belly tells a white lie about a yellow joke told at a black-tie dinner and became a black sheep... what actually happened?

Your guess is as good as mine.