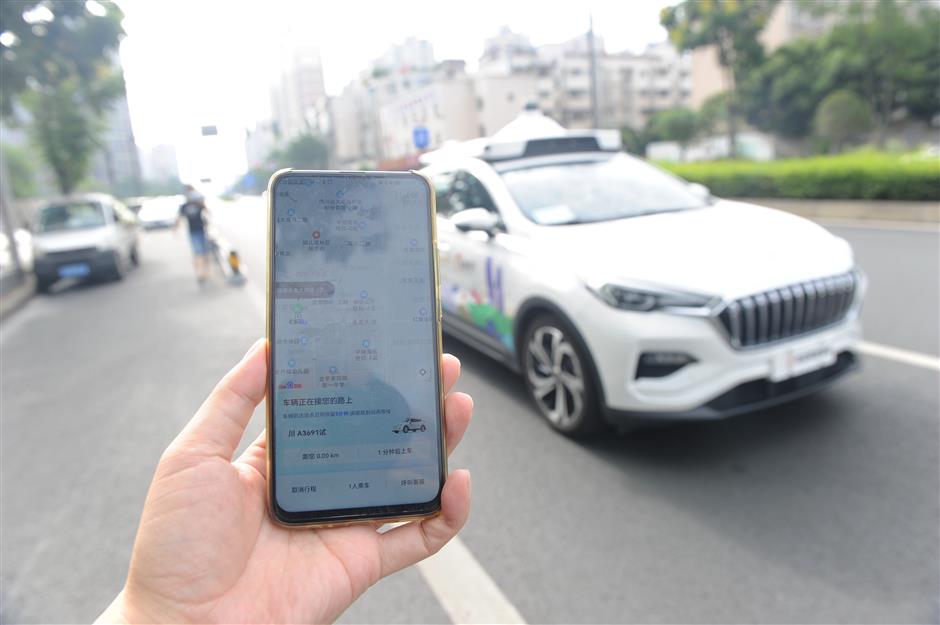 A resident uses an app to hail a driverless taxi in southwest China's Chengdu city in July.

On August 8, driverless robotaxi services were launched in designated areas in the Chinese cities of Wuhan and Chongqing, marking a significant step in the country's exploration of the commercialization of autonomous driving.

Thanks to continuous technology innovation and policy support, China has made steady strides in autonomous driving, from running trials in semi-closed areas to venturing it on open roads, as the market potential of this technology continues to grow in the country.

Chinese tech giant Baidu is the only company that has obtained the permit to offer driverless robotaxi services on open roads in Wuhan and Chongqing. The service is provided on Baidu's autonomous driving platform Apollo Go.

Before the launch in Wuhan and Chongqing, Apollo Go had provided autonomous driving services in cities such as Beijing, Shanghai, Guangzhou, and Shenzhen, with more than 1 million orders and the total testing mileage exceeding 32 million km.

Like Baidu, many autonomous driving companies in China have been striving to advance the technology and accelerate its commercialization.

WeRide, headquartered in the southern Chinese city of Guangzhou, is specialized in applying autonomous driving to intelligent transportation, freight, and sanitation. Its driverless sanitation vehicle, Robosweeper, has been tested on open roads in Guangzhou's Nansha District since May.

"The technology has been well-received among automakers, and we're working closely with them to integrate our system into consumer vehicles so that truly affordable Level-4 vehicles will sooner be a reality," said Zhou.

The Chinese government has provided considerable policy support for the development of autonomous driving.

In February 2020, the National Development and Reform Commission and other ministries jointly issued a guideline to promote the innovation and development of intelligent vehicles. Authorities in several major Chinese cities later followed suit.

As a pioneer of China's reform and opening-up, Guangdong Province has long been an avid promoter of entrepreneurial and innovative ideas. In 2019, the provincial capital Guangzhou took the lead in the country in permitting road tests for autonomous driving. Now, the city's self-driving mileage has reached 2.55 million km.

Policymakers have created a favorable environment for road tests and public-facing operations, laying the foundation for accumulating mileage and corner cases to validate and continuously improve Level-4 algorithms, said Zhou.

Besides supportive policies, the complicated traffic conditions in China also bring opportunities for autonomous driving companies to improve their technologies and optimize their products and services.

For Chinese autonomous vehicle company Pony.ai, the company's systems need to cope with diverse elements on the road in Guangzhou, such as electric scooters, bicycles, and couriers, to ensure the safe operation of its intelligent vehicles.

"The complex scenarios can create more valuable data, which can help with our technology upgrading," said Mo Luyi, vice president of Pony.ai.

Many autonomous vehicle enterprises have settled in the city. The gathering of production lines, parts suppliers, and startups has facilitated these companies to source cutting-edge components in Guangzhou.

Chinese enterprises are endeavoring to expand the scope and scale of road tests and operations regularly to provide fully autonomous driving services. They also want to adapt to complex scenarios with advanced technologies.

Pony.ai, for instance, takes advantage of its multi-sensor system that encompasses laser radar, millimeter-wave radar and a high-definition camera to ensure redundant monitoring for safety.

Many autonomous driving enterprises in China, with upstream and downstream partners, are promoting the building of an industrial chain to accelerate mass production.

Pony.ai has created strategic cooperation with On Time, a travel platform under Guangzhou Automobile Group, to deploy more robotaxis on the streets and gradually improve the public's trust in autonomous driving.

DeepRoute.ai has partnered with Deppon Logistics Co., Ltd. to equip trucks with Level-4 autonomous driving technology to improve their capacity and efficiency.

"Intelligent-connected vehicles are highly encouraged on the national and local level. We can expect more cities to open up public roads for autonomous driving companies to test and operate their vehicles," said Zhou.