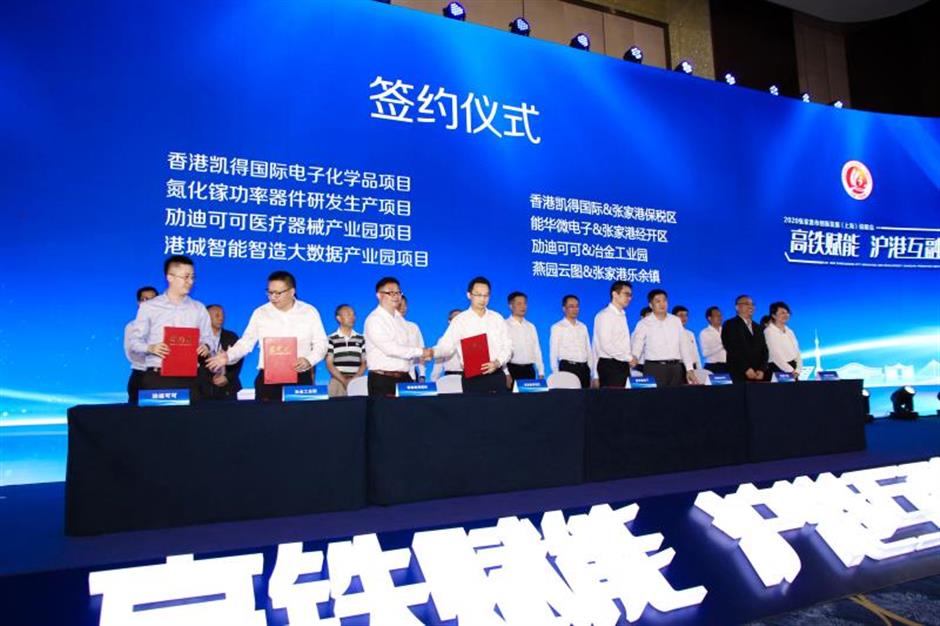 Officials at the launch of the Zhangjiagang Chamber of Commerce in Shanghai and the Shanghai Zhangjiang•Zhangjiagang Innovation Center.

With the launch of the Shanghai-Suzhou-Nantong railway on July 1, new opportunities for development have been created for many cities, including Zhangjiagang, a harbor city in the northwest of Jiangsu Province.

Now less than an hour by train from Shanghai, Zhangjiagang is seeking more interaction with the city to develop its economy, culture and workforce, especially in high-tech sectors.

On Wednesday, 50 business projects worth 43 billion yuan (US$6.15 billion) were signed in Shanghai with Zhangjiagang that involved multinational companies such as Honeywell and Wacker.

At the same time, a Zhangjiagang Chamber of Commerce in Shanghai was established, along with the unveiling of a Shanghai Zhangjiang•Zhangjiagang Innovation Center.

“We would like to have a closer partnership with Shanghai, and serve the national strategy of integrated development in the Yangtze River Delta region,” said Pan Guoqiang, Party secretary of Zhangjiagang.

Zhang Zhao’an, a researcher with the Shanghai Academy of Social Sciences, said cities should make a clear demonstration of their strength in the face of development opportunities, which may better distinguish them in the fierce competition for resources such as funding and talent. Zhangjiagang, a harbor city in the northwest of Jiangsu Province