Huadong Hospital’s Building No. 1 is well-known throughout Shanghai for being the former Country Hospital, designed by Laszlo Hudec in 1926. But it also has another historical building rarely known and easy to miss — Building No. 5 adjacent to the Yan’an elevated highway.

When the doors of this modern building opened in 1933, it was the new Victoria Nurses Home designed by German Bauhaus-inspired architect Rudolf Hamburger. 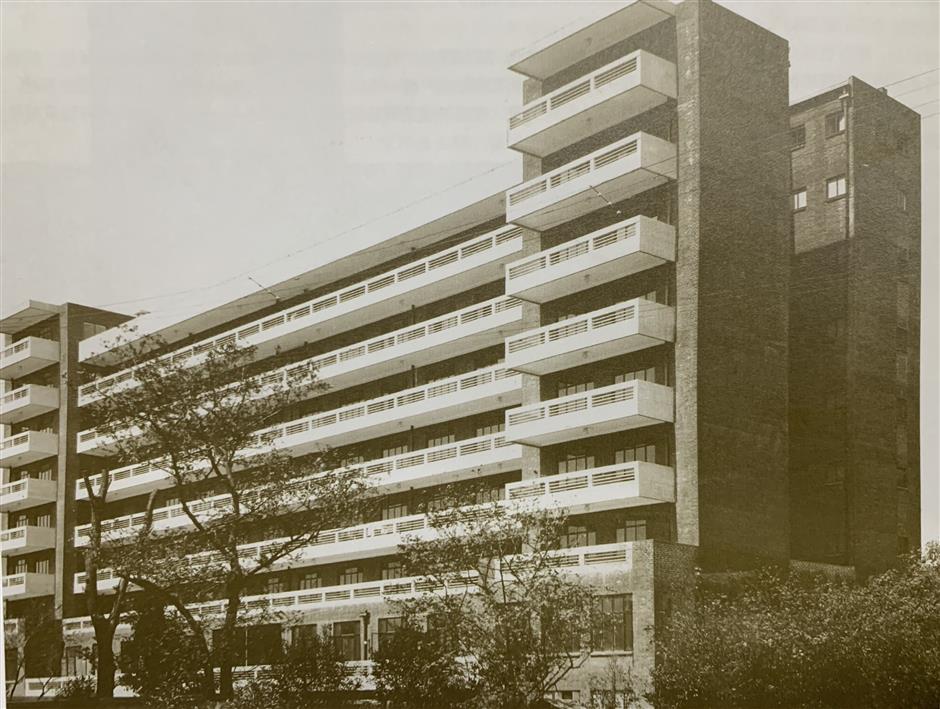 A file photo of the Victoria Nurses Home 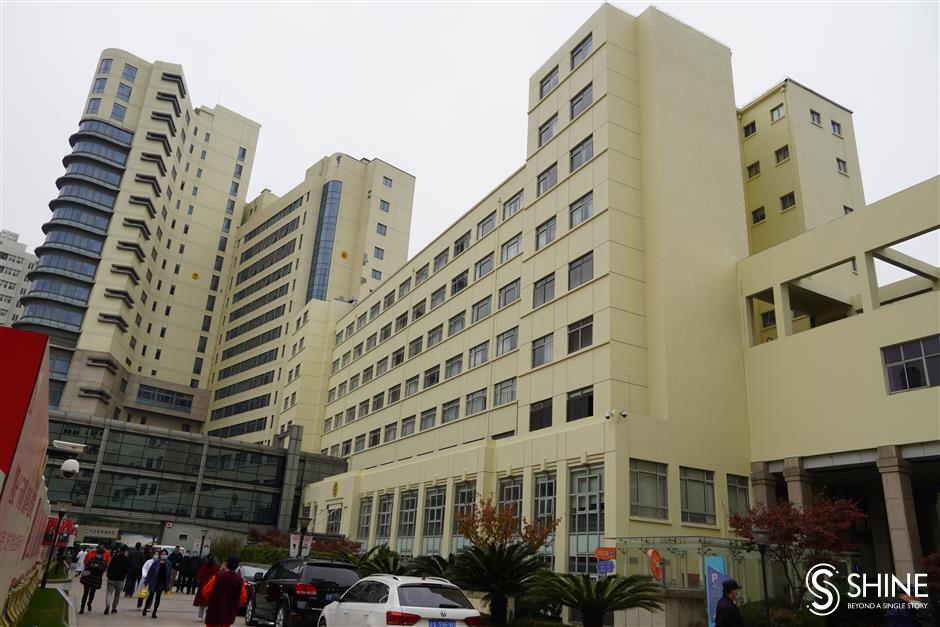 A recent photo of Building No. 5 of Huadong Hospital

On October 25, 1933, the North-China Herald published a picture of the building with long, continuous balconies. It was an imposing eight-story structure built for the Country Hospital by Shanghai Municipal Council. The caption reads, “The New Victoria Nurses Home. A general view of the striking building erected on a site adjacent to the Country Hospital.”

“This medical building has endured many changes,” said Lu Ming, an expert of Shanghai medical history, from Shanghai No. 4 People’s Hospital.

“In 1942, the Isolation Hospital moved into the nurses home and developed into Shanghai No. 6 People’s Hospital. In 1956, Shanghai Public Medical Treatment Hospital transferred here, was renamed Yan’an Hospital but relocated to Kunming of Yunnan Province in the 1970s,” Lu ays.

Shortly before its official opening, “The China Press” published a report on October 20, 1933 to introduce the historical background of the Victoria Nurses Home.

In 1897, a committee of local British residents raised funds to provide a memorial of Queen Victoria’s Diamond Jubilee. Subscribers were mainly British, but included other foreign nationals. These funds were used to erect a building on land owned by the Shanghai Municipal Council (SMC) near Range Road. Upon completion the building was delivered to the SMC and named the Victoria Nursing Institute (later Victoria Nursing Home), which opened in 1901.

However in 1927, with the opening of the Country Hospital, the Victoria Nursing Home received less patients. In 1928, it was closed under economic measures. In 1933, the new Victoria Nurses Home was built on land adjacent to the Country Hospital. The report recorded that the nurses’ hostel, faced with dark red tiling, was designed by one of the architects at the SMC Public Works Department. 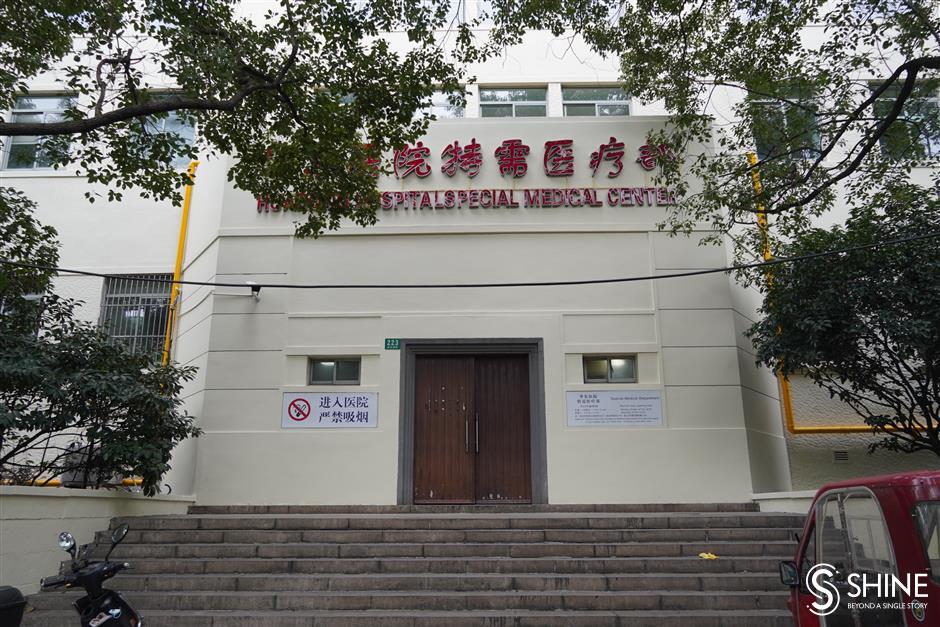 The main entrance of the north side 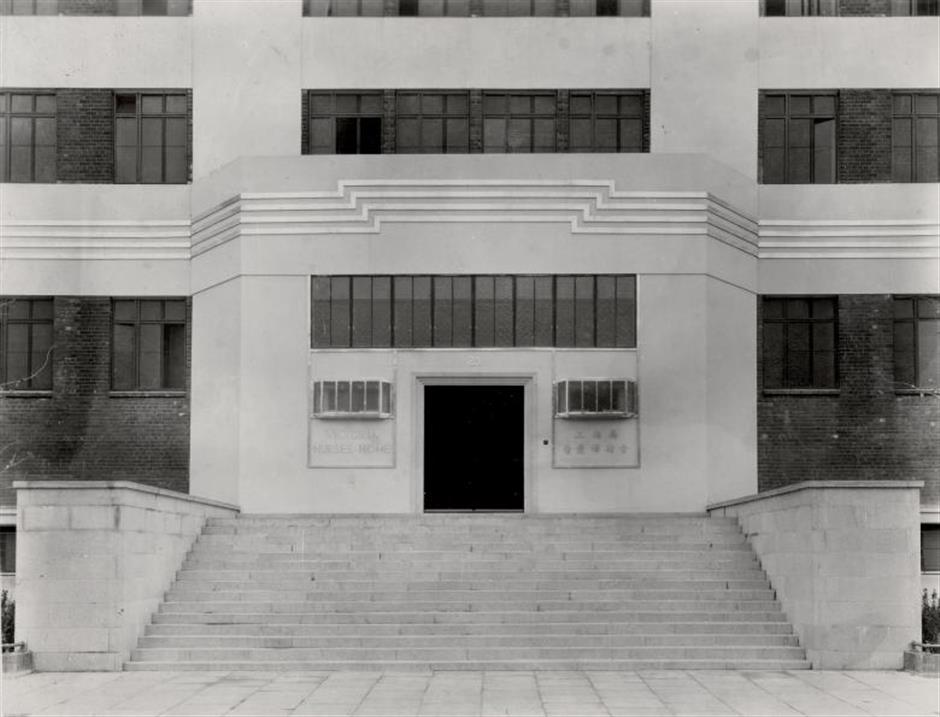 A file photo of the main entrance decorated with some moldings

The architect was Rudolph Hamburger, who came to Shanghai from Germany in 1930, to work for the SMC.

Born in Landeshut, a small town of Lower Silesia Germany, Hamburger moved to Dresden in 1924 where he studied and met trainee architect Richard Paulick. They became close friends and their careers would become later entwined in Shanghai.

In 1925 Hamburger and Paulick moved to study in the Technical University of Berlin, where Hans Poelzig taught them. After graduating, Hamburger stayed in Berlin to work. In 1928 he became a Master’s student at the Arts Academy studios with Poelzig. In 1930, Hamburger responded to a job advertisement placed in a local Berlin newspaper and won the contract to work as an architect with the SMC. In July 1930, he emigrated with his wife, Ursula Kuczynski, to Shanghai.

The Victoria Nurses Home was his first major project, which has been described as “probably the first modern building in Shanghai.” The block occupied a dominating site directly beside the Great Western Road, today’s Yan’an Road W. Imaginative design features compensated for the essentially rectangular shape of the building. The apartments were finished to high standard, with radiators and insect nets for the windows. The “Victoria Nurse Home,” which opened on 23 October 1933, was widely praised both by medical workers and local media.

“The building is a manifest expression of the German Bauhaus school’s clearly-formulated architectural idiom. It is simple, stark and extremely horizontal,” Warner writes in the book.

“In the Victoria Nurses Home, every floor was designed with a long, continuous balcony that faces the south. White railings form simply-cut horizontal lines on the facade, emphasizing the horizontal volume and rhythm of this building,” she said.

Many of Hamburger’s most important commissions were undertaken in Shanghai where he lived and worked between 1930 and 1936. The Victoria Nurses Home, as well as his Secondary Girls’ School in the Singapore Road (now Yuyao Road), and the vast cruciform Ward Road Jail complex displayed the architect’s exploitation of modern knowledge and materials, imagination and attention to detail.

A China Press report in 1933 noted the new Victoria Nurses Home was equipped with “Everything Up-To-Date.”

The interior was done in plain and ornamental plaster. The most modern cooking appliances and food refrigeration devices were installed on the ground floor, which housed the main kitchen and food-preparation rooms. The boiler room and Chinese staff quarters were also located on this floor.

The first floor featured a large lounging hall, giving access to the sisters, staff nurses and probationers’ dining rooms, library and tea room, all of which had garden views. Adjacent to the lounge were the visitors’ waiting and cloak rooms and the resident sister’s office. 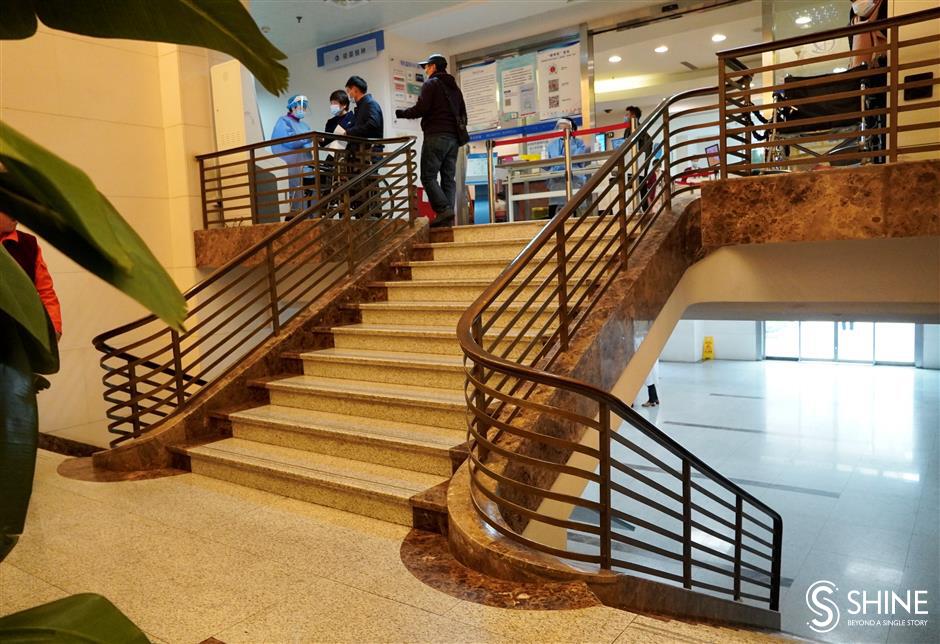 The central flight of stairs leads to the first floor. 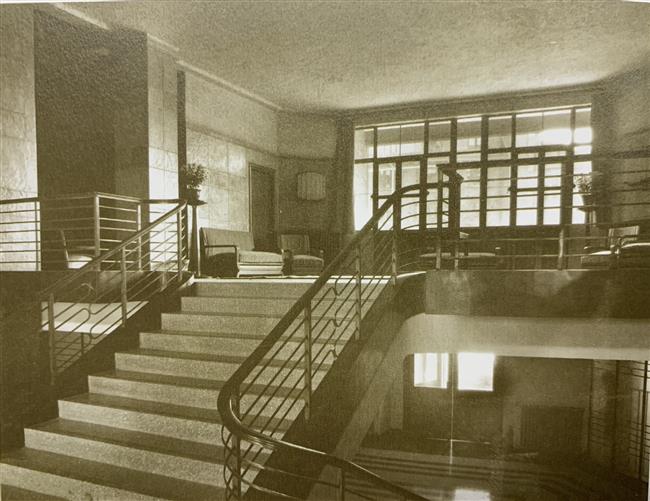 A file photo of the central staircase

The second to sixth floors were identical and provided accommodation for the nursing staff in individual bedrooms with a common veranda overlooking the gardens. The west end of each floor had a two-room apartment for senior sisters, while a small flat occupied the east end of every floor for matrons and the home sister. Each flat consisted of a living room, bedroom, bathroom, box room and private veranda.

Both ends of each floor on the north side had tiled bathrooms, with amah and boys’ work rooms located near the center of each floor.

The seventh and eighth floors served as quarters for probationer nurses and provided individual bedrooms. The eighth floor also had a sleeping porch and roof garden.

“The new nurses home is open to all foreign nurses in the city and is entirely international in character as it was when the original home was built,” the 1933 report said.

In Shanghai, architect Hamburger’s wife was recruited to work for the Soviet intelligence and became a famous spy. It is said he supported her espionage related activities till their divorce in 1939. In 1933, the couple invited Richard Paulick to China.

Hamburger left Shanghai in 1936 but Paulick stayed in the city until 1949, where he worked actively as an architect, interior designer, stage designer and a professor at St. John’s University. In 1945 he was commissioned by the Kuomintang government as a core member for drafting post-war Greater Shanghai Plan in the 1940s.

Today, the entrance and the northern facade of the Victoria Nurses Home were largely unchanged. The southern facade had been renovated and the long balconies removed.

The building served mainly as a VIP clinic. The former nurses’ rooms were turned into private wards designed in a comfortable decor. Chinese nurses in green uniforms were busy working in these rooms, which were once resided by nurse sisters in white robes. 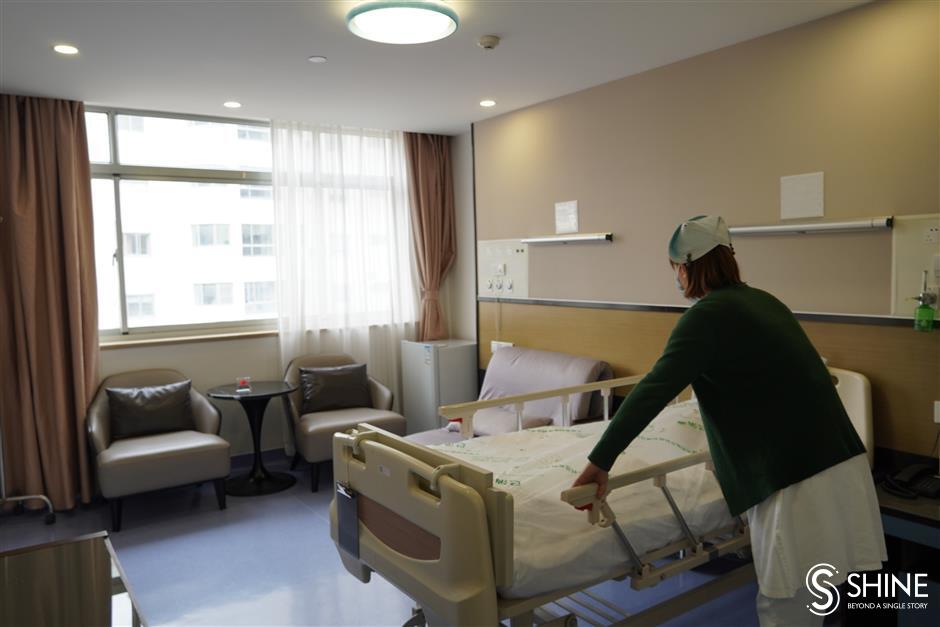 A Chinese nurse is working in a VIP ward which was a nurses' room in the 1930s. 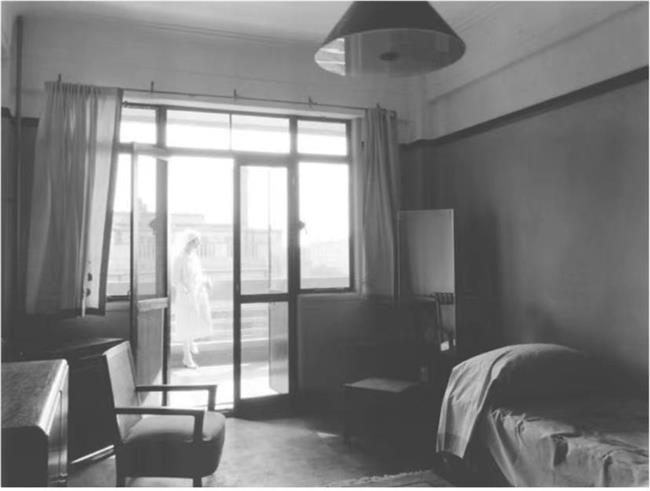 A file photo of the nurses' room

Fancy dress parties seem to be increasing in popularity as the New Year grows older. The dance given by the sisters and nurses at the Victoria Nurses Home last week was a delightful affair, and positive proof that the medical profession are not lacking in originality of ideas. Miss M. Johnstone, sister in charge of the home, received the guests, some of whom she had a good deal of difficulty in recognizing. A moustache here, a little more eyebrow there, and a hectic spot of color somewhere else, will transform the most familiar face. Amongst those present were Sir Victor Sassoon, Brigadier General E.B. Macnaghten and Miss Audrey Macnaghten, Mr and Mrs W.P. Lambe, Dr E. Bowen, Dr and Mrs T.B. Dunn, Dr W.K. Dunscombe, Dr D.L. Marsh, no less than three doctors and many others.