Only constant for Xinzhuang is that it is constantly changing

In 1992, a new Minhang District appeared in Shanghai through a combination of the old district and Shanghai County. Vast changes have taken place as the district went through its urbanization process. As an artery that connects Minhang with downtown Shanghai, Humin Road, with its patriotic origin, helps the district adapt to urban prosperity. The district also sticks to traditional and unique elements. Use this column as a guide to explore Minhang, its changes and what remains the same by tracing along Humin Road. 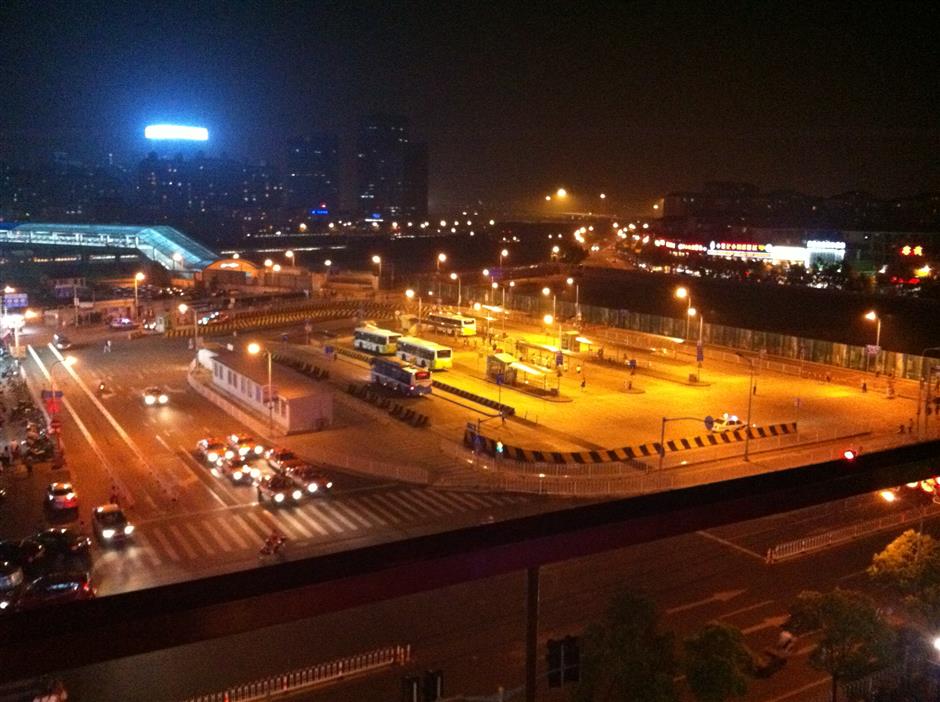 Xinzhuang Town, the seat of the Minhang District government, was connected with Humin Road in September 1959 during a road reconstruction.

The town got its name from the Xin River (that had almost dried up) which used to have Chinese wild ginger (the literary meaning of "xin 莘") on its banks.

An oceanic area 5,000 years ago and pastoral land 2,000 years ago, the town started to develop in 1909 thanks to the opening of a station of the Shanghai-Hangzhou Railway.

The 1959 Humin Road reconstruction project that connected the town improved traffic flow, while the south extension of Shanghai Metro Line 1 to the town in 1997 and the completion of Xinzhuang Highway Overpass in 1998 allowed the town to thrive socially and economically.

The 'geographer' of the town

"When you get an entire map of Shanghai that contains both its terrestrial part and Chongming Island, and you fold it twice and then unfold it, you get a central point which is around Xinzhuang," said Yuan Wei, a geography enthusiast and urban planner who has lived in the town for 27 years.

"My family and I moved to Xinzhuang in 1995 when I was a fifth-grader," Yuan recalled.

"In the 1990s Shanghai entered its rapid urban development. As urbanization progressed, many households in downtown Shanghai started to move to the suburbs.

"When my parents and I arrived in Xinzhuang, the majority of its residents were the Xinzhuang locals, while out-of-town newcomers were rare. Every week I took the Xuhui-Minhang Bus Line and transferred to No. 42, or 49 or 15 buses to a painting studio at People's Square in downtown Shanghai. My pals there would ask me, 'Where did you come from?' And my answer 'Xinzhuang' would leave them scratching their heads where it was."

Yuan's friends would know the area later thanks to the tremendous changes that have taken place since 1997. That year the Metro Line 1's south extension between Jinjiang Amusement Park and Xinzhuang opened.

"The commute time between Xinzhuang and the downtown People's Square, a total of 16 kilometers, was reduced to half an hour by the subway," said Yuan.

"As more people were willing to live in Xinzhuang, many realty companies poured into the town and built commercial housings here. The phrase 'ditiefang,' or residential buildings near a subway, is believed to have been coined around that time."

A sculpture featuring an adolescent girl spreading out her arms, with ribbons and doves behind her, was set up at the Xinzhuang Subway Station north square around 1998. It became a popular place for young people to take photos. 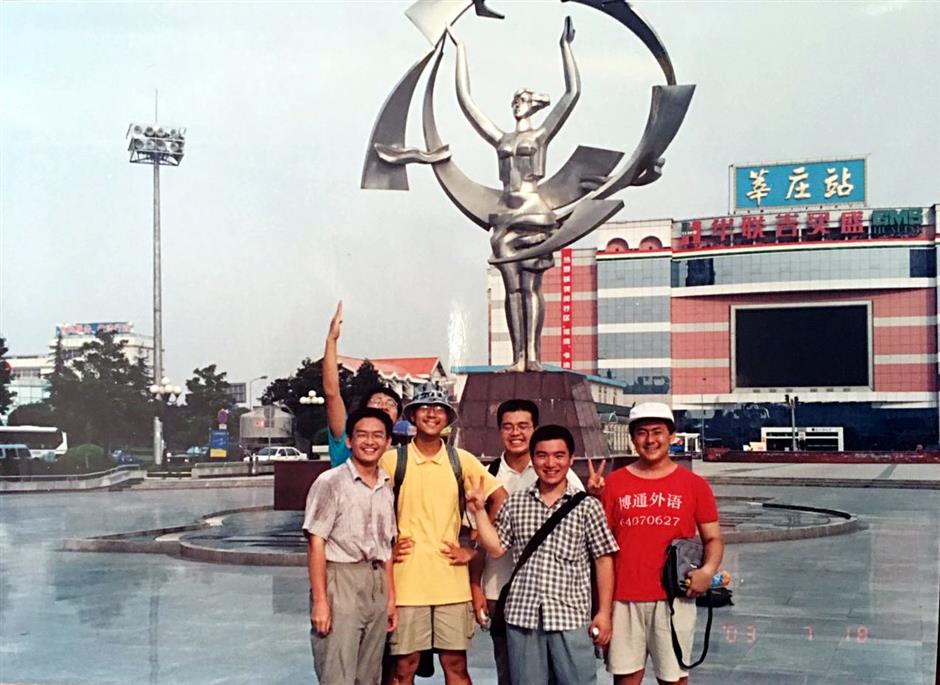 Yuan Wei (second left) and his friends used to pose for pictures at Xinzhuang Metro Station.

A clock to celebrate the coming of the 21st century was also set up at the north square around 2000, with gardeners visiting the place now and again to renew flower decorations.

Both the sculpture and the clock were later dismantled, as well as an annex building of the subway at the north square around 2017, to make room for the construction of a TOD town.

"The only constant for Xinzhuang might be the fact that the town is constantly changing," said Yuan.

"The Tianhui TOD Town, nicknamed the 'Sky City,' will sew up the separate sections of the metro station that are cut apart by the Jinshan Intercity Railroad, as currently the different sections are linked by a platform bridge and culverts.

"The TOD town will also boost Xinzhuang's urban landscape by including modern hotels and office buildings as well as a variety of leisure and entertainment facilities.

"From my primary school years till now when I have become a father of a primary school kid, Xinzhuang has developed from a suburban area to a modern city and is heading toward being a metropolitan subcenter. The town, after rapid urbanization and through many changes, is now optimizing itself in every aspect.

"In addition to the TOD town which is a highlight of the future subcenter, Xinzhuang will also rely on its Xinzhuang CBD around the Chunshen Lake to fulfill its function as a subcenter. The town is both the geographical center of Shanghai and one of its gates as well as a traffic hub." 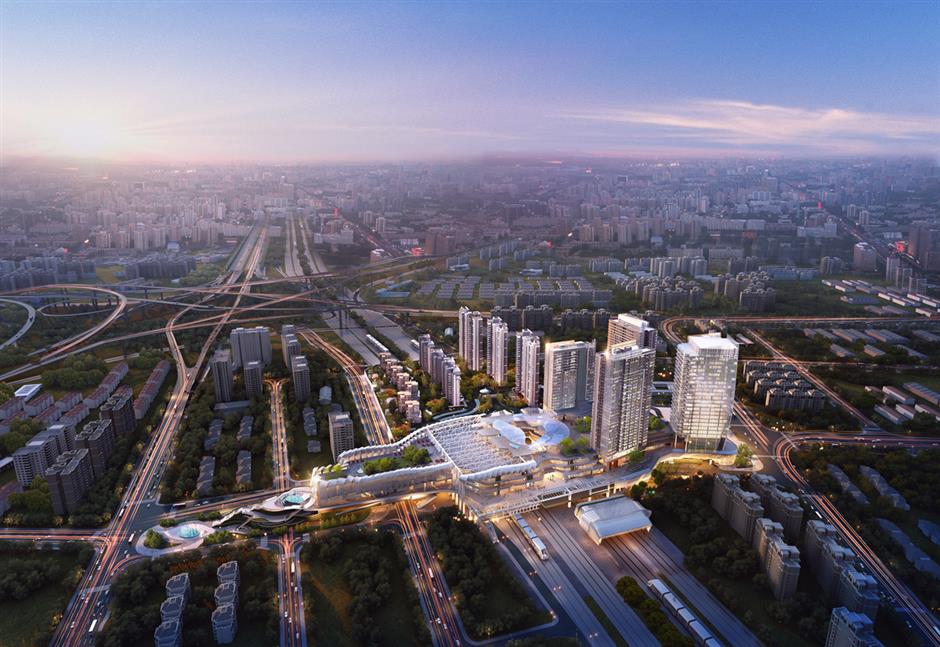 A blueprint of the Tianhui TOD Town

"In my senior high school years, several of us who came from Xinzhuang called ourselves the 'Xinzhuang gang'," Yuan said.

"As we graduated and grew up, we maintained contact, hanging out to do some 'pedantic' things like searching for local chronicles, manhole covers forged in the 1970s or 1980s, telegraph poles bearing the marks of the old Xinzhuang Railway Station, or hiking and cycling along the Dianpu River of Minhang District. One of the members of the 'Xinzhuang gang' is a history buff and I am a geography enthusiast." 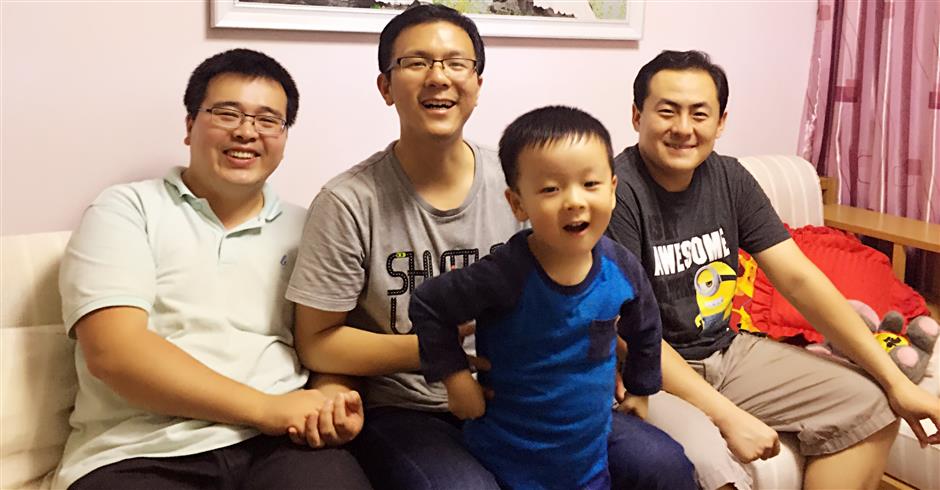 In the Spring Festival of 2016, Yuan reunited with the history buff Guo Mintian, who has been living in the US for a couple of years.

"I miss my hometown and may write some stories about its history," said Guo.

Yuan added: "And I can write about its future from the perspective of an urban planner".

In the past six years they've been writing about 334 stories about Xinzhuang and Minhang in their WeChat account "Tian Yuan Di Fang (天袁地访)."

In August 1988 Guo bid farewell to the 12-square-meter north-facing room where he had lived with his grandparents in downtown Shanghai for four years, where the kitchen range and the toilet were in the public corridor, and settled down in Xinzhuang.

"My memory about the downtown elements ­– Tianshan No. 5 Residential Area where my grandparents lived, Zhongshan Park, Changfeng Park, the Bund and Huaihai Road – is vague, compared with a clearer memory about the workers' club and a local river in Xinzhuang," said Guo.

"My parents and I would still visit my grandparents in Changning District every weekend by taking the No. 91 and 74 buses. We got on at the Xinzhuang Science and Technology Museum bus stop and took a bus again back to Xinzhuang after our visit. I usually fell asleep during the trip and my parents often kept me warm with some additional clothes. Once they left a little denim coat of mine on the bus, which made my mom feel very regretful.

"Once a week in winter I would take a bath at a public bathhouse at the crossing between Xindong Road and Xinbang Road. And opposite the bathroom there was a stationery store.

"And there was the Haixing Shopping Mall, which was miles above any competitors in the pecking order at that time."

Xinzhuang Town in this 1964 file photo 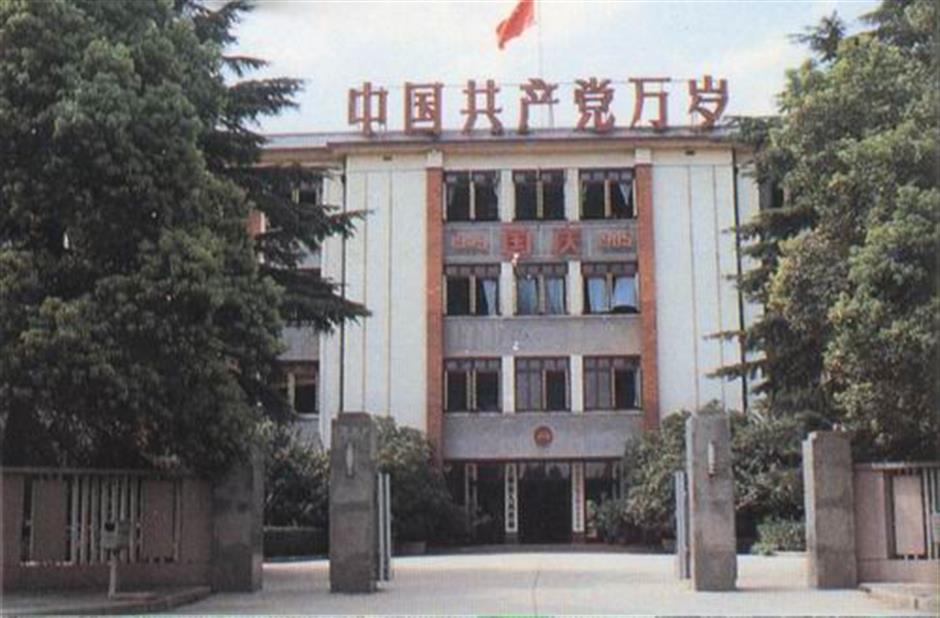 The seat of Shanghai County government in this 1985 file photo 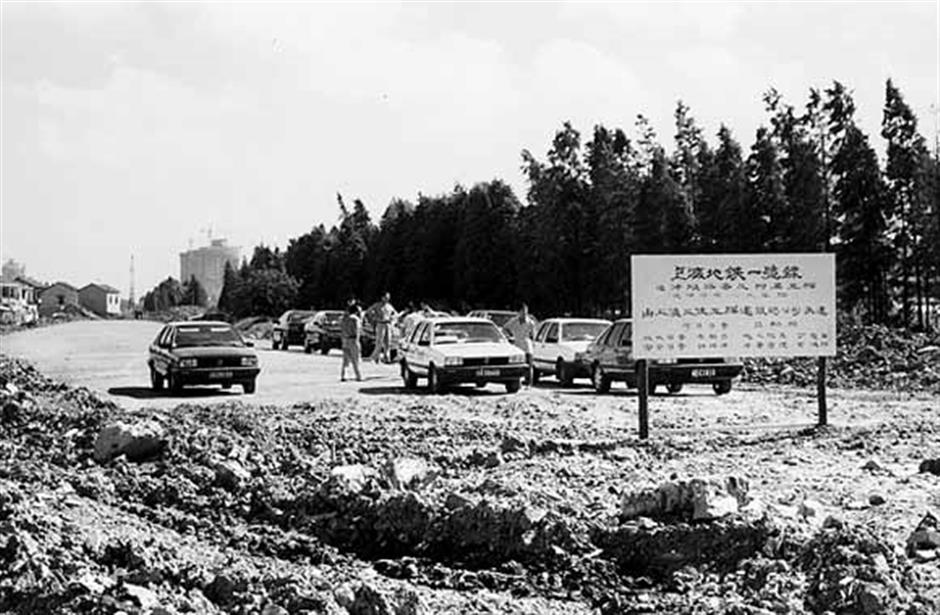 Xinsong Road in Xinzhuang in this 1990 file photo

North Square of Xinzhuang Metro Station in this 1998 file photo

South Square of Xinzhuang Metro Station in this 2002 file photo

"The school name of Shanghai County Experimental School where I studied was changed to Minhang District Experimental School," Guo said. "The event allowed me to feel like I was a school transfer in spite that I didn't transfer to any new school. Soon the Xinzhuang Theater was established as a tribute to celebrate the founding of the new district.

"A burgeoning new commercial mode around 2003 caused the decline of the once invincible Haixing Shopping Mall.

"I left Xinzhuang to attend a senior high school in neighboring Qibao Town, and later to a university in downtown Shanghai. Xinzhuang was no longer an everyday 'companion' of mine and the separation between us would make me out of touch with its development. Even the Xinzhuang Theater was pulled down to make room for new high rises."

Guo moved further to a new home opposite to the south square of Xinzhuang Subway Station in 2012. He watched the movie 'Avengers' on the fourth floor of the Skymall at 1am and then walked back home, when the night-shift cleaners were already starting work and the escalator of the shopping mall was turned off.

The Xinzhuang at that time witnessed a boom in real estate development.

"When I was in the sixth grade in 1996, a librarian told us there would be autonomous driving cars in the future," Guo said. "We didn't take her seriously. Then she said Xinzhuang would one day become Shanghai's subcenter. This time we totally ignored her and scattered in all directions to have fun.

"Now I can clearly see, as the librarian had foretold, my hometown has changed tremendously and will continue to change."

﻿
Special Reports
﻿
61766
,
Only constant for Xinzhuang is that it is constantly changing
Seniors in Songjiang finish 1st round of jabs
Jinshi Museum, Shun Pao Culture Space taking shape in Sijing
Forestry station getting more wildlife assistance calls
Town in suburban district helps farm couple
Songjiang signs agreements on 25 projects at investment meet
Phase Two of Rafael Sky City now in full swing
5,000 vie for 40 reserve talent placements
The good and the bad for business owners
It's hot out there, so hit the water at InterContinental Shanghai Wonderland!
EXPLORE SHINE