He gives the dearly departed a caring farewell

Wearing a facial mask, isolation gown and gloves, Chen Weifeng carefully cleaned each part on the corpse’s face — eyes, nostrils, ears and mouth — with cotton soaked in alcohol. Next, he applied makeup, a cosmetic brush in one hand and a white plastic palette tray in the other. First, a foundation on the face with skin-colored petroleum jelly, then a dab of red color on both cheeks and lips, solemnly and skillfully.

This is not a scene in the Japanese film “Departures,” (“Okuribito”) which tells the story of an undertaker preparing the dead for their final resting place, but a daily ritual for Chen at the Minhang Funeral Parlor, which he has been doing for more than two decades.

“Let me count — I’ve seen at least 100,000 faces here,” said the 43-year-old mortician who is now the department chief. “We want to give the deceased a serene and dignified appearance.”

It usually takes around 15 minutes for Chen to finish the steps involved in the care of the body before it is transferred to the mortuary where relatives can view it. And applying makeup is just a small part of his job responsibilities. 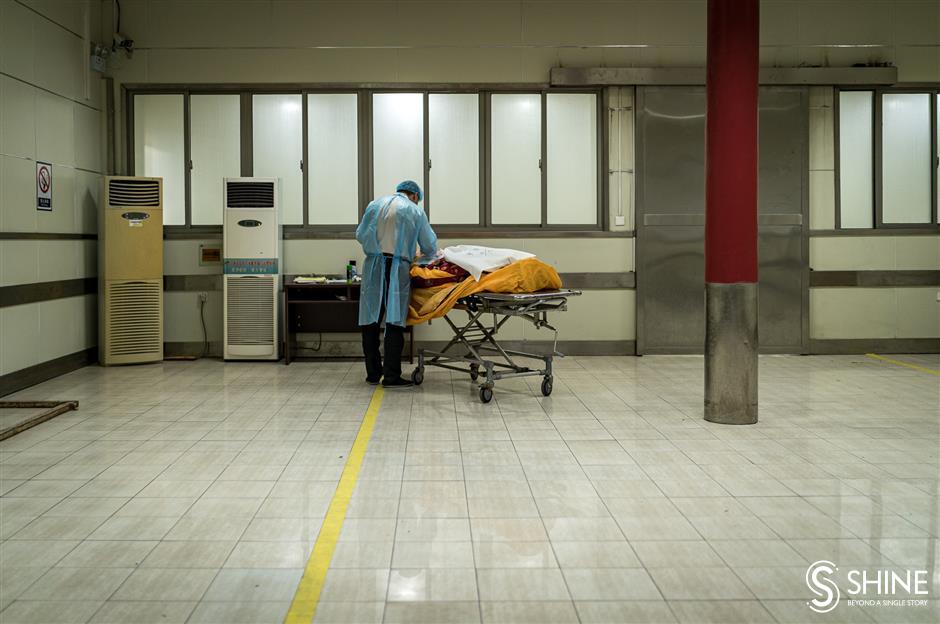 Chen, together with his colleagues, usually arrives in the office before 7:30am. After changing into their uniforms, they start their daily routine by removing a dozen corpses from the mortuary cabinets.

Usually, four morticians are on duty to sterilize, clean and apply makeup. Sometimes they have to shave a face or stitch a wound. Other times they have to stuff a throat and nose with cotton and suture the mouth shut with a curved needle. Then, they will move the bodies into coffins, while other colleagues continue with the next step — coffin decoration and placement.

“All must be done before 9:30am and ready for the memorial ceremonies attended by families of the deceased,” said Zhu Limin, deputy director of the Minhang parlor, built in the 1980s.

In the afternoon, the morticians need to prepare for the next day’s corpses. They wash the bodies and change them into burial clothes prepared by the families.

“If there’s a new corpse transformed, our morticians will check it out immediately to see if there are injuries on the body or if it shows any signs of corrosion,” said Chen. “If it does, we need to communicate with family members as to whether or not we should inject preservative liquid to embalm the body.”

Chen began working at the funeral parlor when he was 20 years old, because both his parents worked there.

“It was July 1, 1997. I worked as the cremator at first, same as my father. I felt sick and disgusted, because it’s so cruel to watch a body burning in fire with blood spurting.”

After working as a cremator for a year, Chen was transferred to the makeup and coffin room.

“I was not afraid of corpses, as my parents would bring me to work on the weekends when I was little while they were on duty.”

But he confessed that the smell of a highly corrupted body made him vomit when he began his career as a mortician, understanding that his life’s calling was to comfort others through the devastating finality of death. 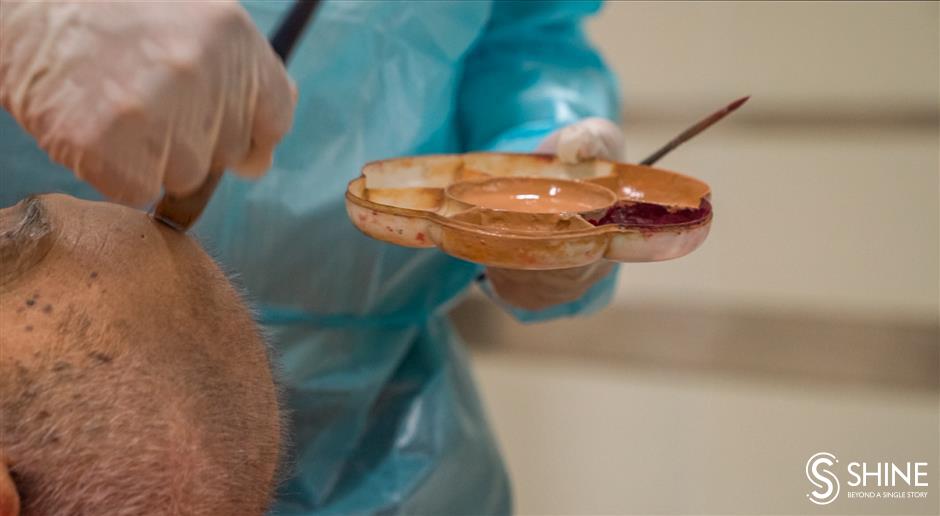 Now, with experience and expertise, Chen has served many different kinds of bodies, such as those who died from traffic accidents, jumping off high buildings, fires, drownings and murders.

The case that left the biggest lasting impression was a construction collapse on Chenhang Highway in 1999 that killed 11 people.

“They were all buried on site in scorching concrete. When their bodies were sent here, many were highly decayed. We carefully cleaned their faces and gave each large amounts of makeup for 10 consecutive days to prepare them for the funeral.

“To treat them as if they were my family members is my guideline. I require my colleagues to do the same. It makes a difference if you have an empathetic heart,” Chen said.

On average, every mortician in the parlor, which takes in nearly 7,200 bodies every year, needs to handle five to six corpses a day.

Chen recalled working on more than 40 corpses a day during the busiest season. He claims that as a mortician, he has seen everything. He once was required to whiten the teeth of a corpse.

“It’s impossible to brush his teeth, so I tried to paint them white with paint. Although I couldn’t understand why his family made such a request, to bring comfort to both the dead and the living is everything.”

He said he was the youngest employee when he joined the parlor, but now he’s one of the oldest. In recent years, the parlor began to recruit graduates from mortuary programs that have increasingly stringent technical requirements.

Although the mortician profession seems to be well accepted and is gradually gaining due respect, most graduates shy away from working in funeral homes.

Having seen so much life and death, Chen thinks the most important thing in life is good health. “To live is to cherish. I’m becoming a simpler person, which makes me feel good,” he said. 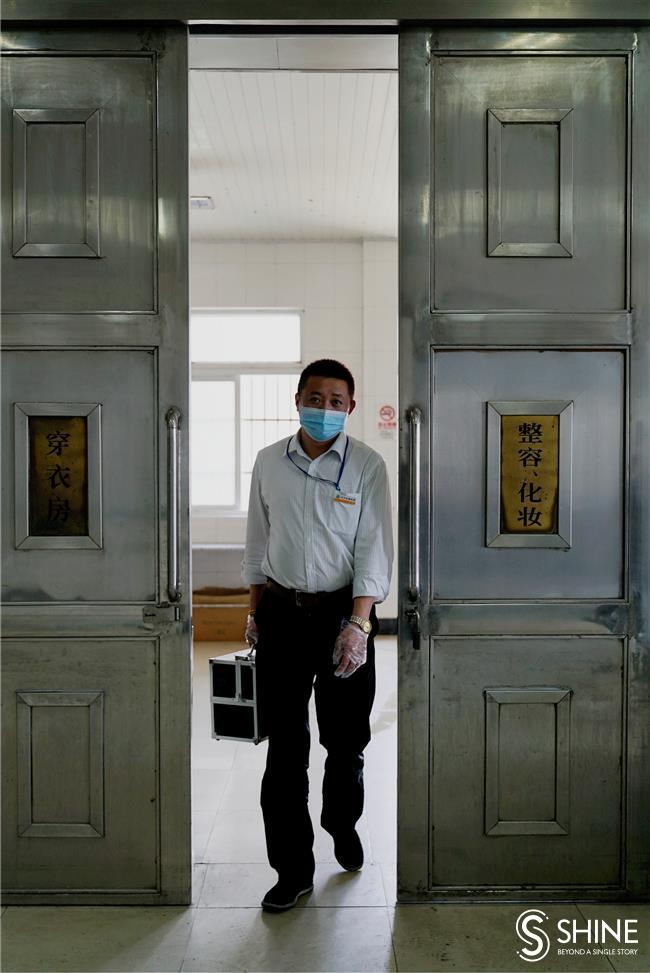 Q: You've been a mortician for 23 years. Can you share the biggest change before and after?

A: When I started working here in 1997, I just wanted to earn a salary. After two decades passed, I feel being a good mortician isn't easy. You need to have a conscientious and responsible heart to do it, enabling the deceased to look serene and peaceful.

My job changed my temperament and makes me simple. Previously, if I were angry at somebody, I would kick him. But now if I'm angry with someone, I state the facts and reason my way to solving the problem.

I'm much better at managing my emotions, which can come across as indifferent and cold. For example, when my grandpa was alive, he had a soft spot for me. When he passed away, I did not weep but my heart ached.

Q: What about people's feedback on your occupation?

A: I cannot disclose my occupation in a clear way. If a new friend asks me where I work, I tell him I work in the Civil Affairs Bureau. If I were to tell people I work in a funeral parlor, most would be afraid of me immediately.

Q: What's your understanding of the meaning of life? What’s the most important thing in your life?

A: The most important thing to me is health. My family is healthy. Working in this industry, we know many people die from diseases, such as heart attacks and brain hemorrhages. No matter how young we are, nobody knows what will happen tomorrow.

Life is so short that I need to cherish every day.

Q: The industry gives you many chances to face death. Do you have any suggestions for us?

A: Respect the deceased and seize the day. Nothing else.