The daily task of feeding a community

April is likely to be an unforgettable month for Yang Fan, who is the Jiashan Road branch manager of Tramy Supermarket in Xuhui District.

Yang, 28, has been the head of the branch since its opening over a year and a half ago. The Tramy Group owns 600 direct-sale stores throughout Shanghai. Amid a surge in online purchasing, Yang and his team are flooded with work, made worse by the pandemic.

"Sorry, I really don't have time for a phone interview; can I reply by voice message around midnight?" Yang texted. "There are hundreds of hungry mouths to be fed in our area. In fact, our entire staff has been working around the clock, far beyond your expectations."

Yang's team consists of only five people, including himself. Last month, everyone worked at least 14 hours every day.

"Surely, we are not 'Iron Men.' Everyone has their limits," he said. "Sometimes, I wish I had two heads and four hands. Every day when I open my eyes, I am all too aware that there are numerous items on my to-do list."

Each team member is in charge of one or two WeChat groups of 500 residents in the supermarket's immediate vicinity.

"We prepare several food packages every day, ranging from meat, vegetables and fruits to rice, noodles and seasonings," he explained.

There are some foreigners in the WeChat group too.

"I was surprised to see some foreigners in this Mandarin WeChat community before the lockdown," he remarked. "Even now, I'm not sure how they got involved and read the Chinese information. I was so preoccupied that I almost didn't have time to check every message in the group. Surprisingly, someone in this group volunteered to be their translator. In a separate chat, she provided me with their orders and addresses."

Yang and his staff were only able to deliver the food packages within 2 kilometers of the supermarket. So, delivering the food supplies to the foreigners on Yanqing Road was a bit difficult.

"Then I put myself in their shoes," Yang said, suggesting he would go the extra mile.

Eventually, Yang and his team readjusted their delivery plans and made three trips to Yangqing Road for last-minute deliveries.

"I didn't even have time to respond, and the volunteer translator later showed me a screenshot of their grateful remarks," he explained. 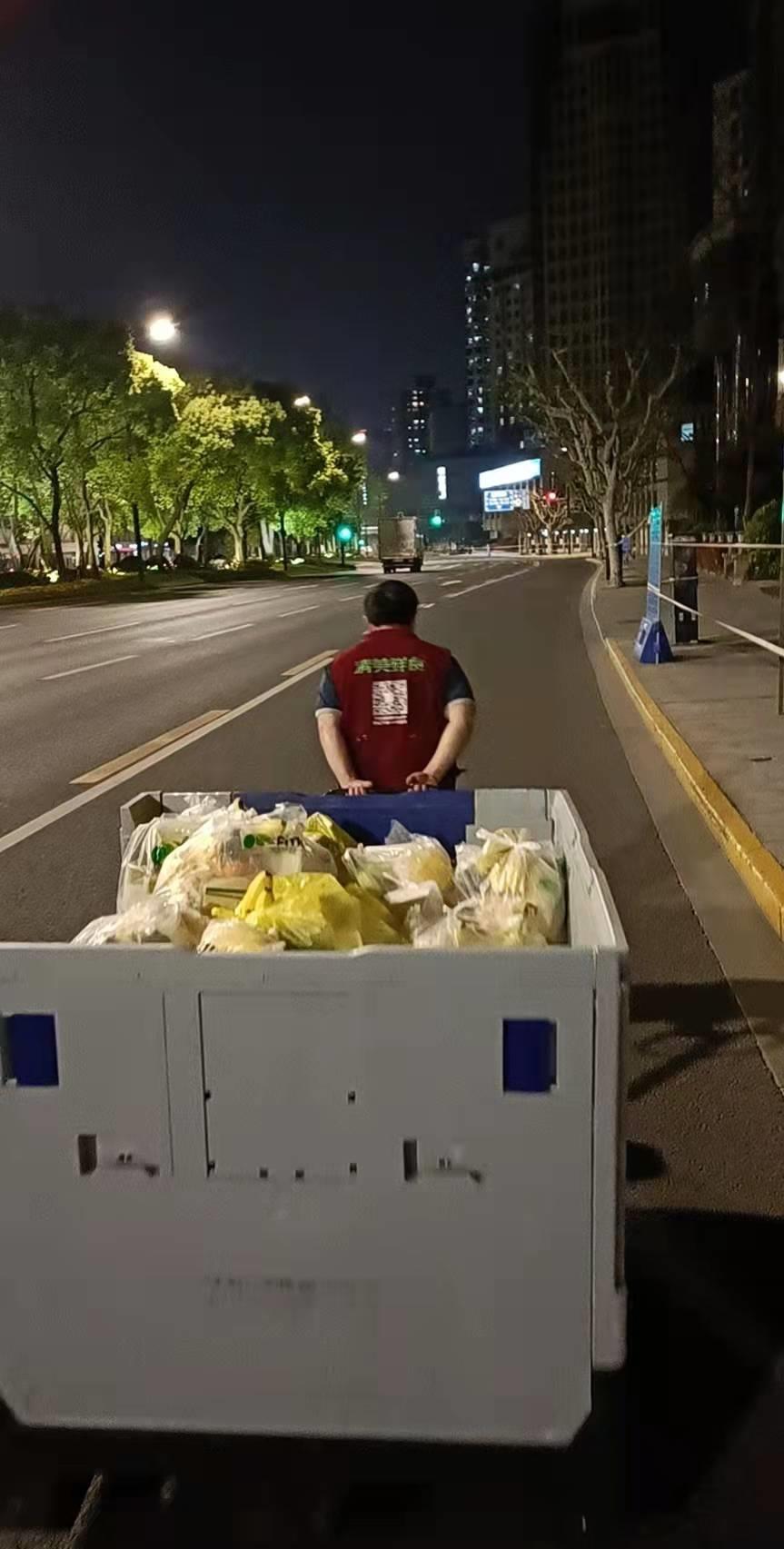 A staff member from the Jiashan Road branch of Tramy Supermarket delivers food packages to the households in Kaiyue Apartments in Xuhui District late at night.

Q: Can you describe your daily schedule?

A: I wake up at six every morning, and then hurriedly check the company's new inventory. As the saying goes that an early bird catches the worm, many of Tramy's managers are competing for food orders. So the first 'fight' starts early. Later, I discuss with our team which should be sold based on the inventory and incoming supplies. Then we post the information on the WeChat groups. We then take orders, receive money and deliver the food packages to the residents. Around 11pm, the team checks the bills and prepares our daily financial statement, sometimes followed by a staff meeting. It is both tedious and exhausting.

Q: What about the team's own meals?

A: Fortunately, most team members are good cooks. If someone is too tired at work, he takes over the kitchen responsibilities. We have a canteen and we pay for our own meals.

Q: How do you relax after work?

A: The perfect relaxation is chatting or squabbling with my colleagues. Fortunately, they are all humorous and talkative.

Q: What is the most unforgettable delivery you have made?

A: It was the first rice-package delivery. Each member was allocated several hundred rice packages. I was very tired and nearly fainted. But I was touched to see the "red packet" sent to us in the WeChat group by the residents, expressing gratitude.

Q: What will be the first thing that you want to do after the lockdown is lifted?

A: I will call back all my staff to the supermarket. Then I will relax the whole day and have small lobsters and iced beer for dinner.

Q: What will be the first thing your team will do after the lockdown ends?

A: Team building, only for entertainment ...