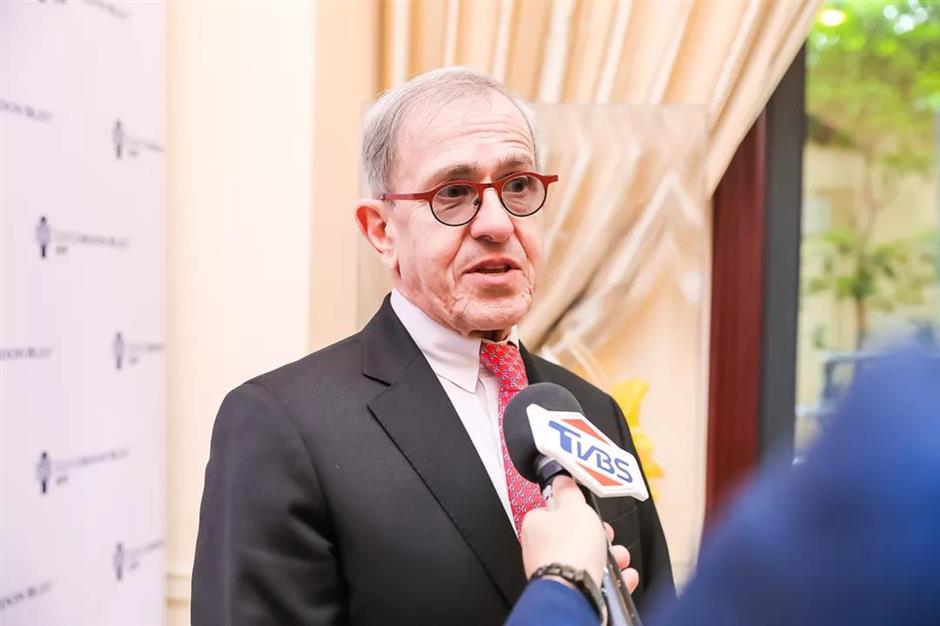 Andre Conitreau, Global CEO of Le Cordon Bleu, announced during the 55th anniversary of the establishment of diplomatic ties between China and France, that the school would found a Chinese food promotion center and a Chinese food academic committee.

As a legend in the dining industry, Le Cordon Bleu is today the largest network of culinary and hospitality schools in the world.

It brought us the popular and charismatic TV chef and author Julia Child who introduced French cuisine to the American public in the years after World War II.

Le Cordon Bleu, founded in 1895, recently celebrated its fourth anniversary in Shanghai with free classes, bringing together alumni from all over the world. They brought their own brands, products, tastes and delicacies.

Restaurant owner Ren Yiji, an alumni from Honghe in Yunnan Province, caught everyone’s eye dressed in her hometown costume and bringing a variety of local mushrooms.

“Mushrooms are very popular with foreigners, my hometown in Yunnan has lots of rare and delicious mushrooms,” she says.

“There are different varieties in every season. I brought the mushrooms here to give our schoolmates some inspiration, incorporating Chinese ingredients into French cuisine.” 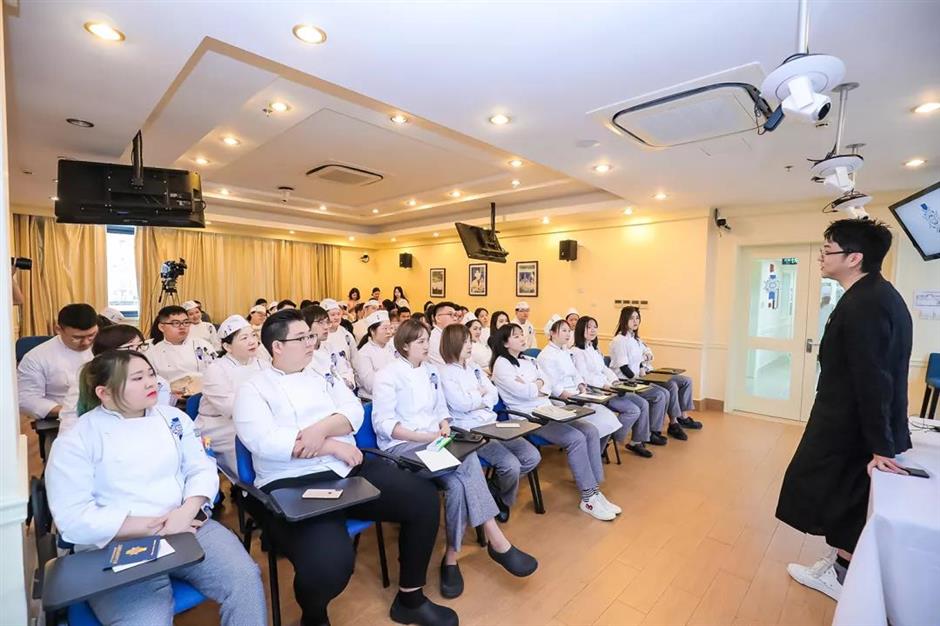 Allen Lin, singer-turned entrepreneur in food industry, has been appointed as a visiting lecturer on Chinese cuisine at Le Cordon Bleu.

The special culinary class iDEALShanghai took was taught by Philippe Groult, assistant culinary arts director and head of Le Cordon Bleu Paris Cuisine Department. He transferred to Shanghai as a coach for a short time.

Chef Groult has won several awards in recognition of his talent. In 1982, he was awarded the “One of the Best Craftsmen in France (Un des Meilleurs Ouvriers de France)” medal by then French president François Mitterrand. As an MOF awardee he wears the flag of France on his collar, the highest honor in the French culinary world.

We gave chef a challenge: Teach us to make a decent dish for less than 100 yuan (US$14.54), but which looks like it came from a three-Michelin-star restaurant.

Chef Groult gave us his special recipe of pan-fried lamb chop, teaching us cutting techniques and the presentation that is the magic of a Michelin-level dish. Simple seasonings and fresh ingredients with your personal culinary thinking make a great chef.

Chef says Chinese and French cuisine, among the two best in the world, have great similarities.

“The level of Chinese cooks is very high,” he says. “Not only the speed, but also the technique. There are 16 cooking methods in Chinese cooking, so to French cooking. So French and Chinese chefs can easily relate.”

This year, on the occasion of the 55th anniversary of diplomatic ties between China and France, Le Cordon Bleu announced the establishment of a Chinese food promotion center and a Chinese food academic committee in Shanghai.

“In my opinion, Chinese food is the best in the world,” he says. “I like Cantonese food. But I prefer the food from Xi’an in Shaanxi (Province) because of the good vinegar and good garlic.” 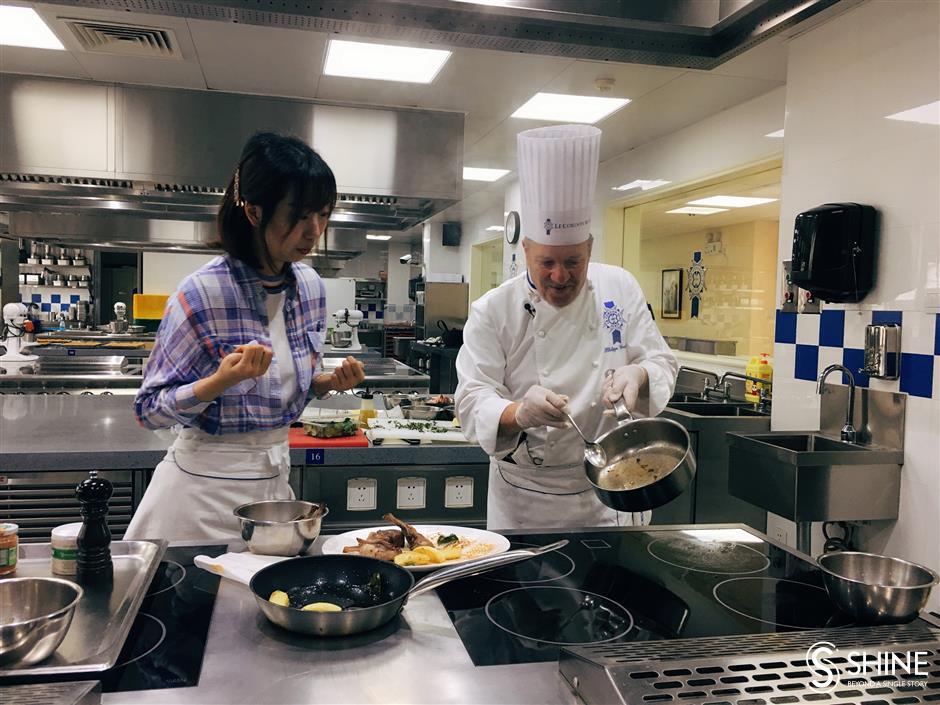 (Chef Philippe Groult said the best food is the taste of home, so you can adjust the amount according to your taste.)

1. Use the classic way to prepare rack of lamb with the bones “frenched,” or exposed.

2. Shape the potatoes like a banana with a knife.

4. Add some salt and pepper.

5. Heat the other pan over high heat until the oil just begins to smoke. Carefully add the lamb chops to the hot oil and sear on both sides until well browned.

6. Remove the lamb chops, add some water in the pan, boiling for the sauce.

7. Brush the plate with red wine sauce and chilli powder, do the presentation. 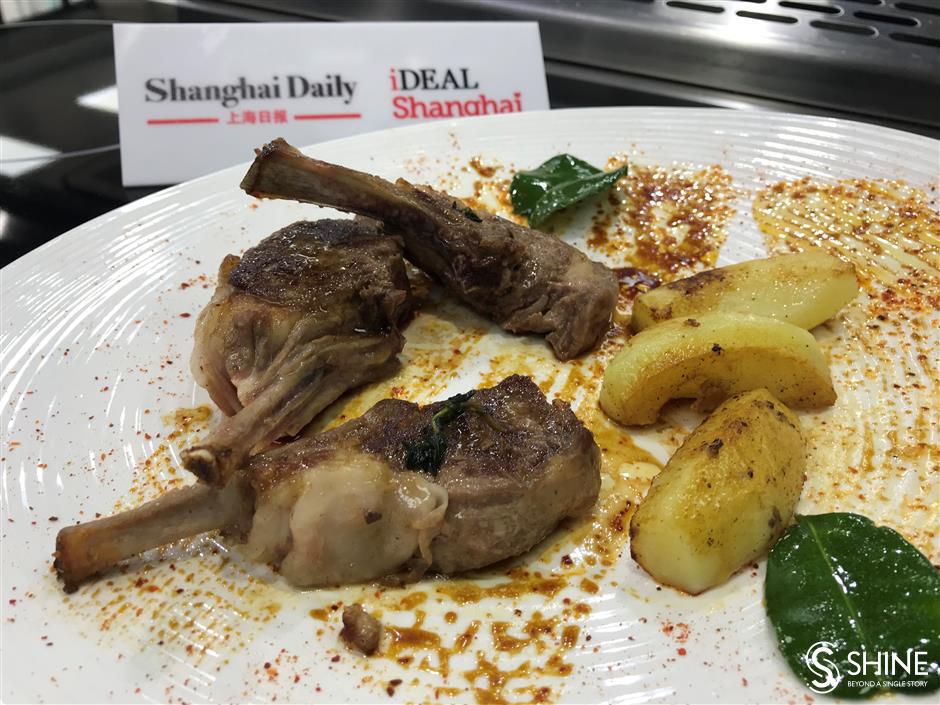 Special Reports
ADVERTISEMENT
61908
,
Time to make the most of mussels
Marrakech, an exotic spice of culinary life
Hand mixers boom hits the nation
Serving up an authentic taste of Singapore
So you think you know noodles?
Michelin stars for restaurant's Taizhou cuisine focus
Restaurants find ways to adapt to outbreak
Snacks will keep your guests happy
The Cut Meatery calls out to local carnivores
French fusion with Shanghainese flavors
EXPLORE SHINE