For your next holiday, go underground in Bozhou

If you are a fan of the ancient Chinese novel “Romance of the Three Kingdoms” or interested in that early period of history, Bozhou in Anhui Province is the destination for you.

The 14th century novel, written by Luo Guanzhong, is set in the turbulent years between about AD 170 and 280. The storyline, part legend and part historical, is a tale of intrigue and warfare among feudal lords fighting either to restore the dying Han Dynasty (206 BC-AD 220) or replace it. Among its hundreds of characters is warlord Cao Cao, born in Bozhou.

With high-speed trains now extending to Bozhou, visitors can go directly from Shanghai to a city thousands of years old.

The ancient underground military tunnel network is the icon of the city. Believed to have been built by Cao (AD 155-220), the 8-plus-kilometer tunnels are centered at a place called Dayushou in the old town of Bozhou, then radiate out beyond the city.

Part of the network, or about 2km, is open to the public. The entrance to the tunnels, which used to be just a plain door on the street, is now a bit overly elaborate, making it hard for some people to take the place seriously. The developers said that they “restored” Qiaowang Tower to its original look during Cao’s era, but it’s hard to believe that early builders erected such a grand, five-story building with carved golden calligraphy relief.

“I thought it was yet another fake facsimile to lure ignorant tourists when I saw the magnificent, shining character cao carved on the base wall,” says Sun Tao, a first-time visitor to Bozhou. “But as soon as I walked into the tunnel, I realized I was wrong.”

The network is a huge underground labyrinth, with twists and turns, and stairways built of stone. The tunnels are narrow with low ceilings. People taller than 1.8 meters may need to bend a little all the way through. 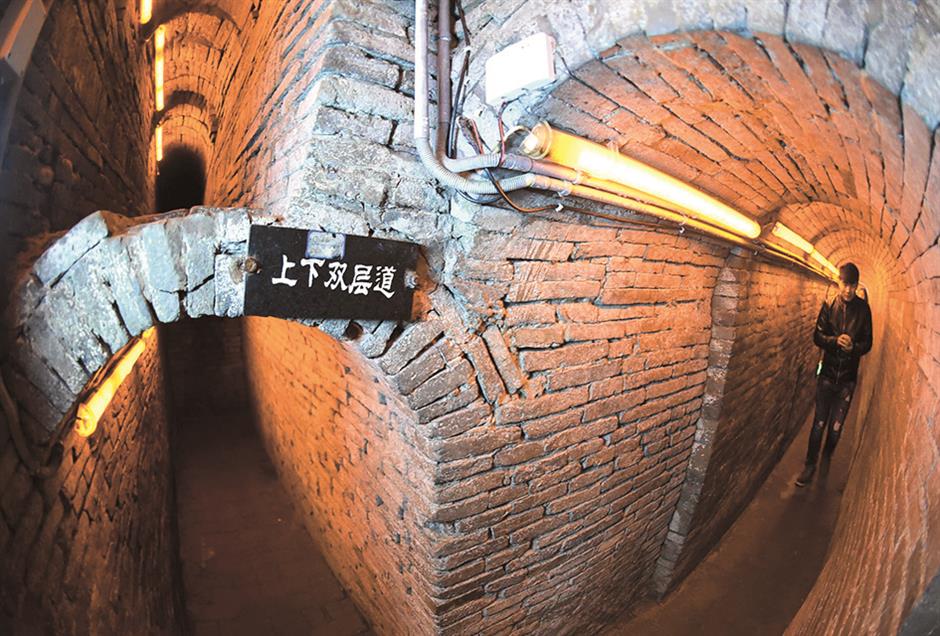 Official history books relate that after Cao failed in a crusade to overthrow the warlord Dong Zhuo (AD 138-192), he withdrew his troops to his hometown Bozhou and ordered the underground network to be built. He used the tunnels to get soldiers in and out of the city without his enemies seeing his military strength or strategy.

There is not much written recording about the network, partly because it was a top military secret known only to high-ranking officials. But it is recorded that the tunnels were still in use some 800 years after they were built. During the Southern Song Dynasty (1127-1279), a flood inundated the city. It sank, burying the underground system. Not until 1938 was the network excavated.

The main exploitation of the network, however, didn’t start until about 30 years later, when the Chinese government launched a nationwide campaign to build as many air-raid shelters as possible. The entire Bozhou network was dug out, and large volumes of relics from several dynasties were unearthed.

Apart from weapons, pottery and porcelains, a tablet bearing the characters for gun xue, which means “snow-like rushing river tide,” was found at the entrance of the network. It is believed that the carving was made by Cao himself — the only handwritten message he left to posterity.

Visitors pass through the newly built Qiaowang Tower to enter the tunnels. There, several galleries explain the history of Cao and the Wei Kingdom he founded.

Another must-visit site in the city is Huaxilou, an ancient Chinese temple and theater that is only 20 minutes’ walk from the network. 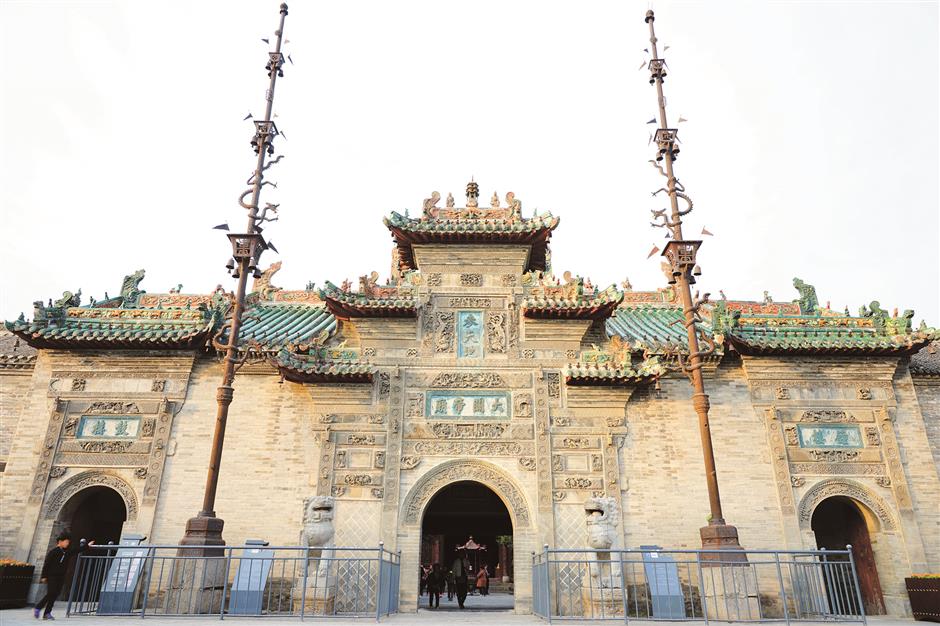 First built in 1656, Huaxilou’s several grand buildings represent the epitome of ancient Chinese architecture. Originally, the tower was a temple to worship Guan Yu, another general of the Three Kingdoms (AD 220-280) period. Somehow, Guan was also worshipped as a god of fortune. A group of medicine dealers raised the funds to build the temple.

It was expanded as a theater several decades later. Maybe because the fundraisers were mainly from Shanxi and Shaanxi provinces, the architecture was not limited to typical Huizhou style. A mixture of styles from different places, the theater has the look of a magnificent Baroque palace, in an Eastern sort of way, with painted ceilings and rafters, and carved beams and walls.

Two iron flagpoles in front of the gate have 48 iron bells hung on them. The chimes can be heard from afar. Twenty-four iron flags are inserted in the poles, with an iron dragon curling up around them.

Past the flagpoles is a wall of brick carvings in typical Shanxi style. The carvings depict mythical and mystical stories with 115 characters and more than 100 animals.

The interior of the theater building is also covered with carvings. It’s hard to know at first glance what to focus on. More than 600 characters can be found in the colorful carvings; most are anecdotes from the Three Kingdoms era.

It is believed that the designers tried to “use the past to talk about the present,” hoping that people would find wisdom in ancient stories. 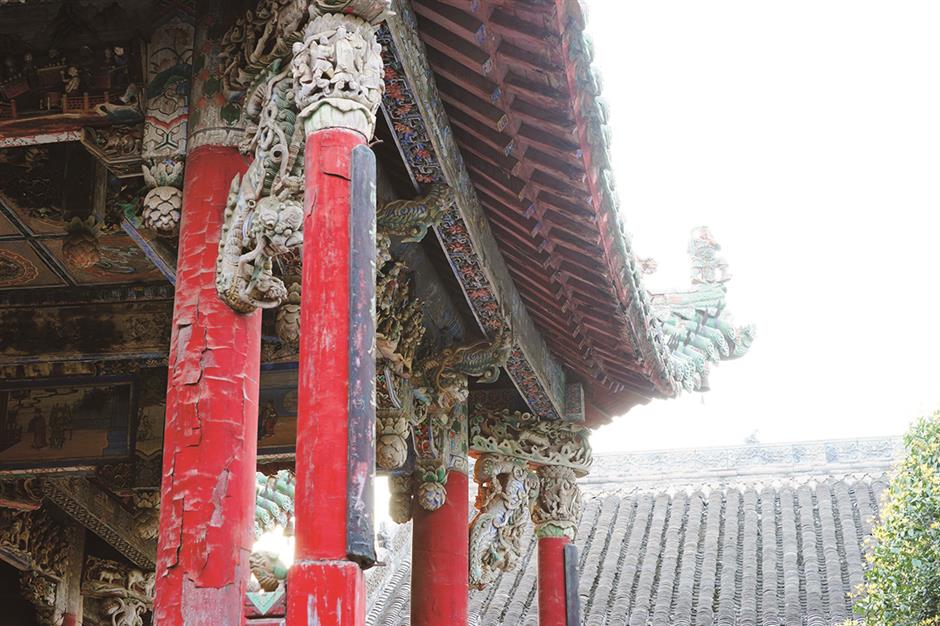 During a day’s walk around the city, visitors deserve a break. Local snacks are most welcomed, and beef pancakes are the most popular.

The round pancake is the size of a 12-inch pizza, with a rich beef and bean starch noodle filling. Vendors cut the pancake into wedges, so you could share it with your fellow travelers.

The wrapping of the pancake is so thin and crispy that it cracks with every bite. The stuffing, usually made of beef, is savory, tender and juicy.

There are various tales about the pancake in Bozhou. Not surprisingly, many are linked to the local hero Cao. However, the snack, in fact, first appeared during the Qing Dynasty (1644-1911), created by a Hui Muslim surnamed Li, who lived near Huaxilou.

The pancake is Bozhou local’s favorite breakfast. It is eaten with either garlic sauce or mahu, a cereal-like paste made from rice and soybeans.