Designer is the crown jewel in time-honored artistry 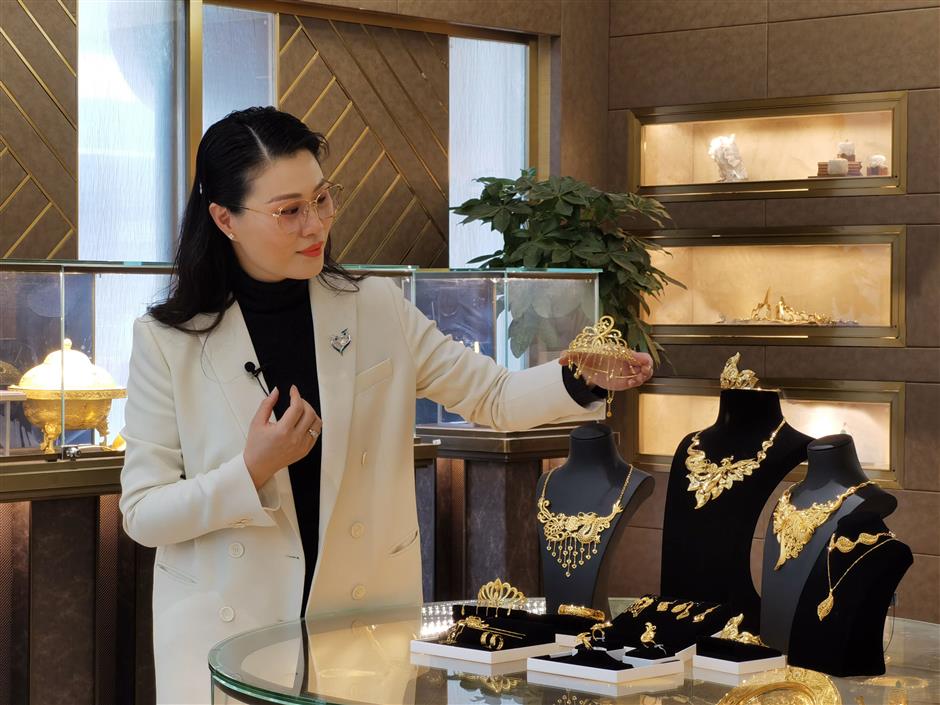 Huang Wen poses with one of the jewelries designed by her.

Huang is chief designer for Lao Feng Xiang, the time-honored jewelry brand dating back to 1848. At age 42, she is the youngest master of the art in Shanghai, winner of more than 40 design awards in competitions both at home and abroad.

Some of her jewelry creations have been presented as national gifts to foreign leaders attending major events such as the Asia-Pacific Economic Cooperation (APEC) summit, World Expo 2010 and the China International Import Expo.

“It is a great achievement for me to create beauty and share it with others,” Huang said.

Huang’s blend of “East-meets-West” designs has enabled the brand to expand overseas. By the end of September, Lao Feng Xiang was operating 4,124 branches worldwide, an increase of 200 in a year, despite the COVID-19 pandemic.

In August, the company opened a branch in Vancouver, home to many overseas Chinese and its second outlet in Canada.

Huang leads a team of more than 100 young designers, passing on her experience and creating new designs with technologies such as three-dimensional printing.

Though she has achieved the title “master” in her art, she said she has perhaps not been a master at motherhood because of her busy schedule. She has a 12-year-old daughter, and her husband, a financial professional, has taken over a lot of the household affairs.

“Interest has kept me in this job for so many years,” she said. “I just like drawing, designing and seeing ideas turned into real artwork.” 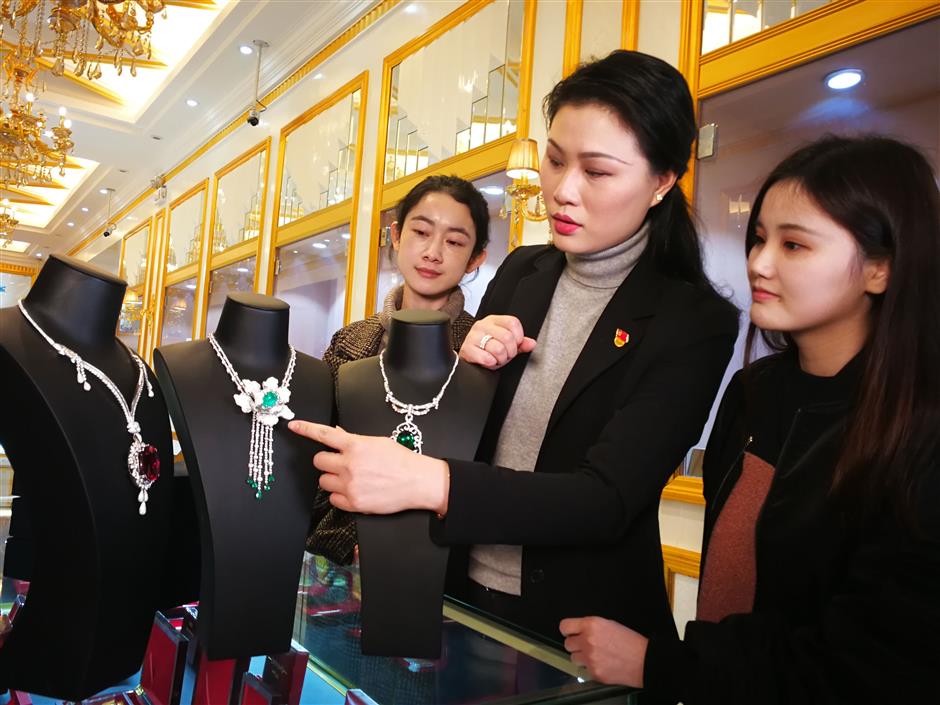 Huang Wen (middle) explains one of her masterpieces to young jewelry designers.

Huang was born into a traditional Shanghai family. Her father, who worked for the Shanghai Film Co, often took her to film studios, where she became obsessed with various stage props and scenery art.

“I am lucky to be a Shanghai native with an inherent sense of fashion quality and appreciation for beauty,” Huang said.

She began learning jewelry inlay skills when she was 15 at a local vocational school. After graduating from the Shanghai Huashan Art School, she was recruited by Lao Feng Xiang as an intern.

She practiced hammering, filling and welding for three years until her design talent was noticed by Zhang Xinyi, a national handicrafts master and inheritor of “delicate gold and silver jewelry making,” a listed national heritage skill dating back to Han Dynasty (206 BC- AD 220).

“The brand went through a gloomy period in the 1990s when Huang was recruited, but she persevered through what was somewhat boring training and a low salary,” Zhang recalled.

One of her masterworks, called “shape of the century,” was purchased for the collection of the Anglogold Gold Museum in South Africa. It is valued at US$40,000. The artwork combines the Western structural elements with Chinese philosophy.

Zhang was responsible for guiding her through all the hubris to keep her feet firmly on the path of continuing self-discovery and improvement.

Chinese traditional culture is the foundation of all kinds of innovation, he told her. It provides an endless source of inspiration.

Taking his advice, she spent hours in libraries, learning about the traditional furniture, patterns and designs of various dynasties.

“I learned, for example, that paintings of Chinese dragons had different details in different dynasties,” Huang said.

The learning experience paid off. In 2001, her new set of masterpieces — gold magnolia brooches — were chosen by the Shanghai government as national gifts for the wives of national leaders and ministers attending the APEC summit in the city. 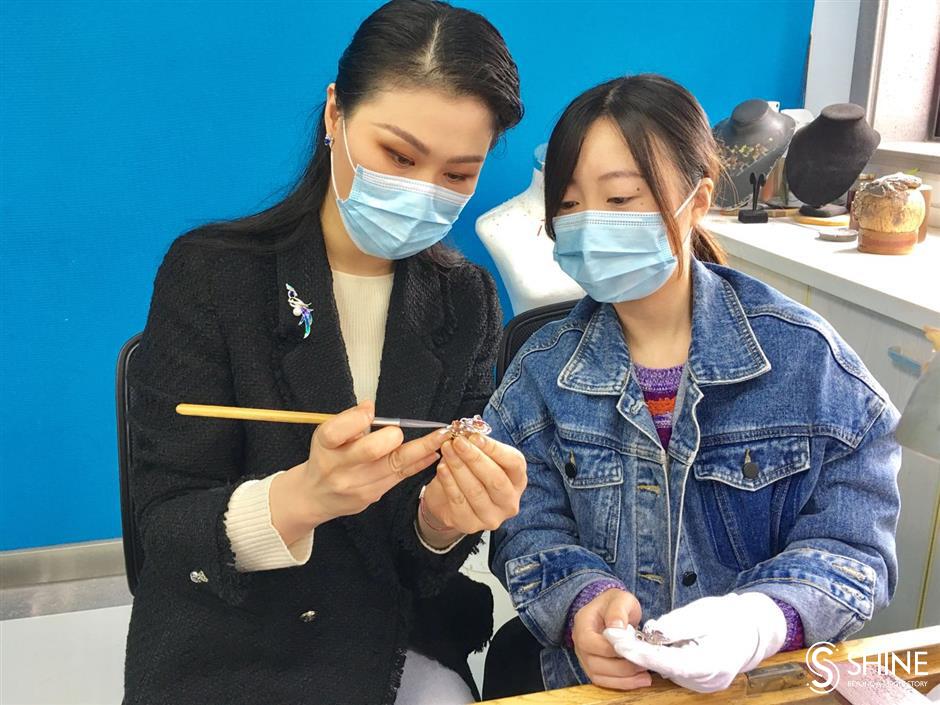 She combined the traditional skills of master Zhang and modern inlay techniques to create an emerald necklace that won her a gold medal in China’s artisan masters’ award. Another necklace designed by her was singled out by international judges as the “most oriental-style modern jewelry design.”

She mentors young designers, showing them how to improve their creations. On visits to jewelry-making artisans in a nearby workshop, she helps them fully realize their ideas.

After the novel coronavirus pandemic abated, Huang led over 40 designers and artisans to design a platinum and diamond brooch called “Wing of the Angel.” The brooches were gifted to each of the 1,649 Shanghai medical team members who bravely went to Wuhan, the then epicenter, to serve on the front line of the COVID-19 battle.

The brooches, with a total value of 9.6 million yuan (US$1.36 million), were donated by the company. The original prototype was donated to the Shanghai History Museum to commemorate the city’s valiant efforts against the disease.

The brooch design features the petals of the magnolia, Shanghai's official flower, and the wings of the angel, representing the medics, Huang said.

Chen Junyan, a nurse at Shanghai Ruijin Rehabilitation Hospital, was overcome by the gift.

"It will not only become a memory of Wuhan, but also an inspiration to keep fighting against disease and keep better serving patients," said Chen, who was in the first team dispatched to Wuhan on the eve of Chinese New Year.

Wang Naiyi, a young designer at Huang’s studio, said Huang spent a long time during the lockdown period teaching and helping modify the designs of proteges.

“Master Huang made the perfect modification to my original design for the ‘Wing of the Angel,’” Wang said. “She is always open and equanimous. She is both my teacher and my friend.” 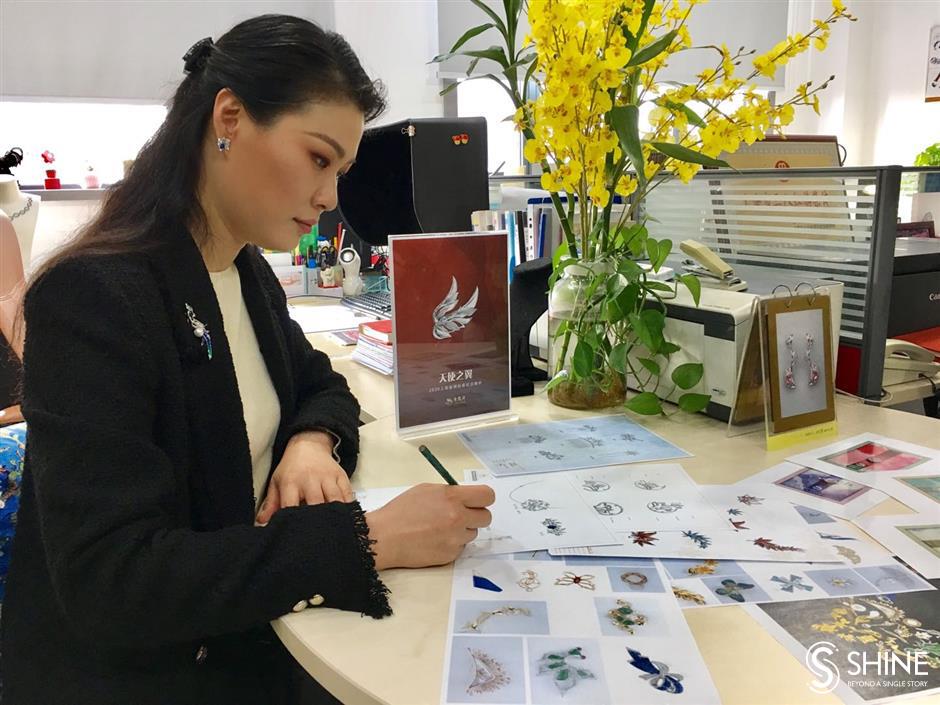 Huang modifies some of her designs.