Shanghai-based Energy Monster, a company that provides rental portable chargers in public places for lithium-battery mobile phones, jumped nearly 18 percent in its debut on New York’s Nasdaq market last month. Was it a sign that a popular trend in the so-called “sharing economy” is here to stay?

Energy Monster has placed portable chargers in bars, hotels, restaurants, entertainment venues and transportation hubs. It said it would use the proceeds from its US$150 million initial public offering to finance business expansion and attract new partners to secure more public venues.

The company, which counts Alibaba Group as one of its minority shareholders, reported a revenue rise of 39 percent in 2020, but profit shrank 83 percent to 112.6 million yuan on soaring costs of sales and marketing.

Domestic consultancy iResearch Inc estimates the size of the mobile charging services market in China will grow from 9 billion yuan in 2020 to 106.3 billion yuan in 2028, with increasing prevalence of smartphones and usage intensity.

Why would consumers rent charging services when they can buy their own power banks to carry around with them?

"I want to keep my handbag neat and light, and I can always find a power bank rental service at major shopping malls," she explained. "It's very much a random choice and based on what kind of portable battery is available at a restaurant or coffee shop, so I don’t keep a close eye on what service I'm using."

Others are more skeptical about power bank rental services.

"I have to remind myself to bring my own power bank or I have to pay 20 yuan to recharge my battery at a downtown café," wrote a Weibo user surnamed Huang. 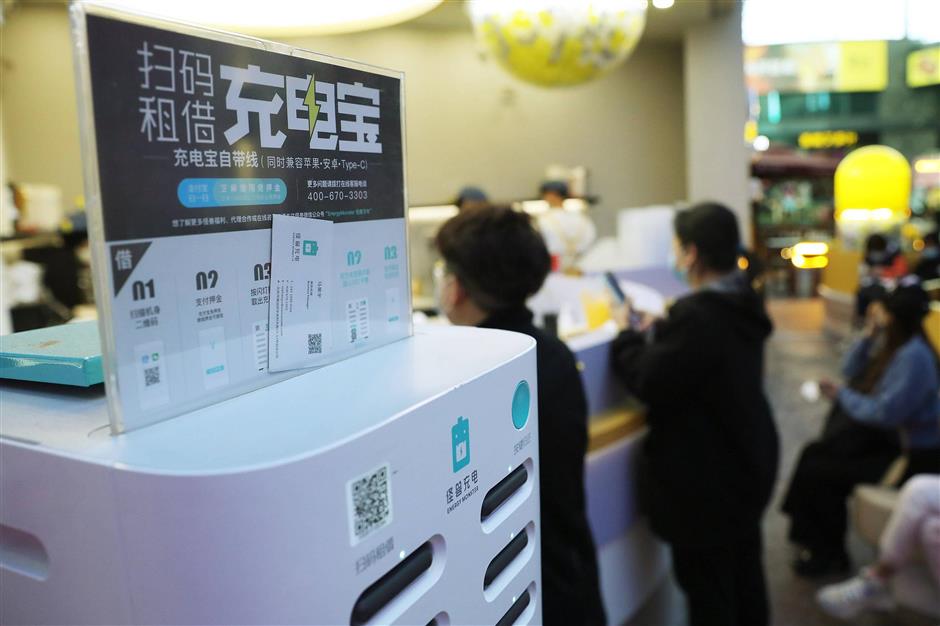 Demand for such rental services could taper off as new technology emerges. Many smartphones nowadays come with long-life batteries that allow a user a full day of calls.

Energy Monster is not the only company engaged in the sharing economy to seek money for expansion.

While carrying your own battery charger may be relatively easy and even cheaper in the long run, it’s not as convenient to use your own bicycle to get around town. That tends to make demand for shared bike services more solid.

Public bike rental firm Hello Inc in late April submitted a prospectus to the US Securities and Exchange Commission for a Nasdaq listing, aiming to raise US$100 million.

The sharing economy is aimed at consumers on the go. Instead of owning a vehicle or a personal power bank, people can turn to public rental services.

Veteran technology columnist Lan Xi said the gradually lifting of pandemic restrictions means more people are out and about, giving impetus to power bank and other shared rental services.

Now, many of the companies are looking beyond the sharing economy to build their businesses into more sustainable models.

Amid competition, a merger of smaller players signals a consolidation in the industry. Soudian and Jiedian, two Shenzhen-based power bank rental firms, announced a day after Energy Monster's Nasdaq debut that they are joining their operations.

The companies operate by setting up charging stations in public places so customers can rent portable power banks to carry around, and return them to any other stations.

Many companies tapping the sharing economy typically started out with special offers, such as low rental fees and discounts. After they reached a critical mass, they started to focus on increasing profit by hiking the fees.

Instead of offering free rides in the past, bike rental services now usually charge 1.5 yuan for every 15 minutes and a monthly subscription fee of 15 to 18 yuan. 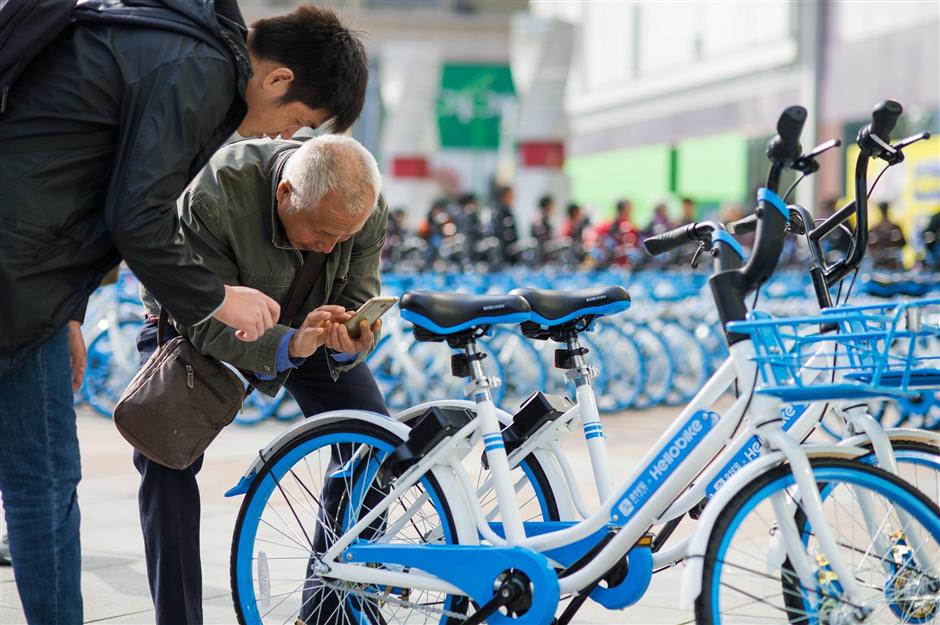 An elderly man is helped by a passer-by with how to scan a QR code to unlock a HelloBike shared bicycle.

In the bike rental realm, too, competition has been fierce. Three major bike rental providers have survived price wars, including Hello, Meituan and Qingju. They have secured a loyal user base and now aim to develop alternative revenue streams to keep the businesses viable.

Didi, which completed a US$600 million financing round for its bike rental affiliate Qingju in February, combined bike rental with electric scooter rental, aiming for an average 40 million daily rides by 2023.

It also unveiled a concept electric scooter model this week to focus on lower-tier cities where scooters are more often used for long-haul transportation than bicycles.

Li Kaizhu, co-founder of HelloBike, cited large unmet demand for two-wheeled electric vehicles, a popular means of transportation for Chinese people, as the reason behind the building its own vehicles.

Booming demand from China’s food and package delivery industry is also a factor.

The company is also testing the waters with car-pooling and other lifestyle services.

"It's a difficult move for HelloBike to seek a presence outside bike rentals, and it faces strong competition from established players like Meituan and Alibaba," commented Chen Liteng at the private consultancy China Ecommerce Research Center.

According to the State Information Center, China's sharing economy recorded a mere 2.9 percent in growth last year, valued at 3.38 trillion yuan. That was down from the 11.6 percent gain in 2019, largely due to the COVID-19 pandemic.

Growth, however, is forecast to rebound to 15 percent this year and maintain an annual growth rate of 10 percent in the following five years.

Sharing economy operators are aware of the need to closely track consumer trends as habits shift and people become more price sensitive with their discretionary spending.

How successful they will be in striving to moving up the industry value chain remains to be seen.

Lei Ying, assistant professor of marketing department at Peking University’s Guanghua School of Management, has pointed out how public rental and sharing economy operators can tap and use personal data. That, he said, requires delicate regulatory measures.