When the huge earthquake struck Jiuzhaigou County in southwest China's Sichuan Province on Tuesday night, Na Guo thought he and his wife were going to die.

"I saw huge rocks falling down the mountainside in the dark, and I thought it was over," Na said.

On Thursday afternoon, the couple and eight others were finally rescued from a Jiuzhaigou tourist area, almost 40 hours after the earthquake struck.

As the ten people received intravenous drips at a temporary shelter in Jiuzhaigou's Heye Village on Thursday afternoon, they were still visibly frightened.

The group are all local residents who run small businesses near Panda Lake scenic area. They often go into the mountains to sell souvenirs, food and drinks to tourists.

"In the summer, we often just stay the night in the tourist area," Na said. "The mountains and the lake feel like home and there was nothing to be scared of."

Tuesday night started off like any other summer night, but the ten villagers had no idea the terror the next 40 hours would bring.

At around 9 p.m., the earthquake struck.

"We were taken by surprise and didn't know what to do," Na said. "There was so much dust we could barely see each other, and I thought this was the end."

The rest of the night they stayed put through many aftershocks. As the dust slowly cleared, the villagers were able see each other and discussed how to find a way out.

"No one dared to sleep, and we stayed awake giving each other moral support," Na said.

As the temperature dropped to five or six degrees Celsius and the villagers kept warm by putting on the ethnic minority clothing they rent to tourists for photographs. 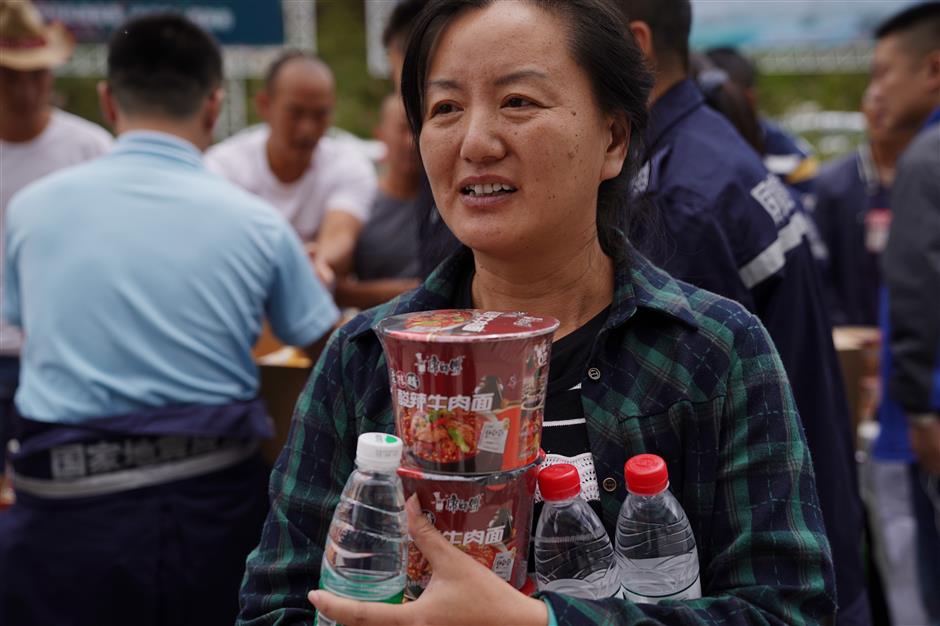 A woman who evacuated from the quake area gets instant noodles and water from Jiuzhai Huanglong Airport on August 9.

After the earthquake, the rescue work immediately began. Several helicopters were flown around the tourist area looking for people stranded inside. On Wednesday afternoon, a helicopter spotted a group of people near Panda Lake.

At first it seemed impossible to get them out. The only path leading to the lake was completely blocked by rocks, trees and dirt. Aftershocks caused more rocks to fall, making rescue work extremely dangerous.

"The villagers were stuck in a high altitude area. The wind was strong and changing directions, and there was no place for a helicopter to land," said Zeng Hong, one of the pilots.

After hovering for a long time, rescuers dropped some food and drinks and left.

"When I saw the helicopter, I felt so relieved," said Pu Changsheng, one of the villagers. "I knew that they had seen us, and the government and our relatives were coming to save us."

On the second night, the villagers took turns watching the mountains, while the others rested.

OUT OF THE WOODS

On Thursday morning, the weather got better, paving the way for the rescue, but the villagers suddenly disappeared.

A seven-person team from Blue Sky Rescue reached Panda Lake on Thursday morning, finding no one where they had expected the group to be.

"We were quite worried," said Xiao Fengchun with the rescue team. "Then one of us saw a note on the ground, which had been left by the villagers."

According to the note, the villagers had headed towards another tourist area to find a better place for helicopters to land.

Helicopters continued their search and finally located them near Arrow Bamboo Lake. However, the area was not suitable for the large helicopters to land.

"We had to use two small seven-seater helicopters and eventually were able to land them," Zeng said.

By 3 pm Thursday, the villagers had been evacuated.

"I was so nervous the whole time that I couldn't sleep at all," said Pu Changsheng. "I'm just happy that we can go home."