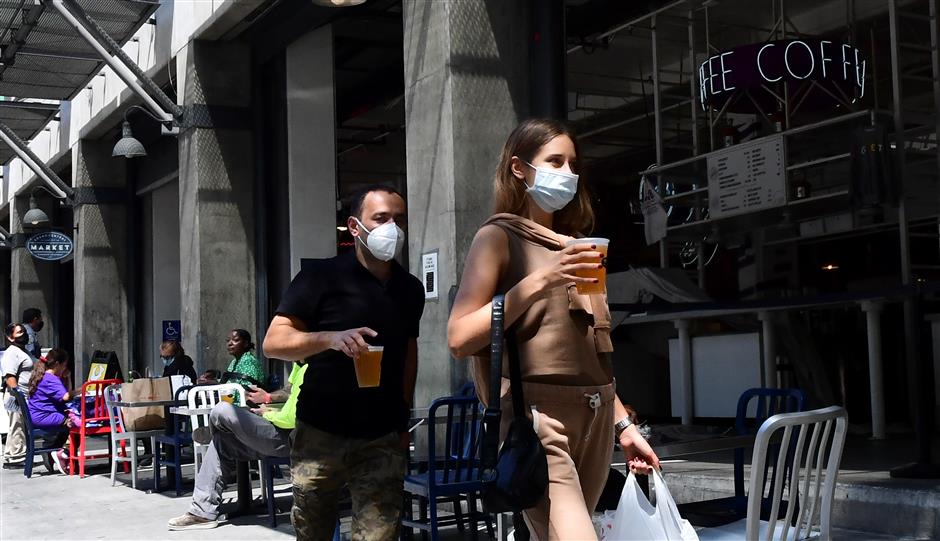 People carry their pints of beer past tables for outdoor dining in Los Angeles, California, on July 1, after indoor restaurants, bars and movie theaters across much of California were ordered to close for at least three weeks.

The US notched more than 52,000 new COVID-19 cases in 24 hours on Wednesday, a tally by Johns Hopkins University showed, a new one-day record as infections surge around the country.

The Baltimore-based university's tracker showed 52,898 more cases as of 8:30pm (12:30am on Thursday GMT), bringing the total number of cases since the pandemic reached the United States to 2,682,270.

The university also recorded a further 706 fatalities, bringing the total death toll to 128,028.

Hospitalizations are also increasing in several cities, including Houston and Phoenix.

On Wednesday Texas broke its daily record and reported 8,076 new cases of COVID-19, nearly 1,000 more than the day before.

The surge in cases has seen several states pause their reopenings. California on Wednesday banned indoor dining in Los Angeles as well as service in bars, cinemas and museums for at least three weeks.

The governor of Michigan also closed bars in the northern state, while Oregon and Pennsylvania have fallen in with other states making it compulsory to wear masks, a highly politicized issue in the country.

"During a heavy travel season, the absence of a strong national response, including a nationwide masking mandate, will continue to threaten the viability of our economy and the ability of our schools to reopen in the fall," warned David Rubin, director of PolicyLab, a research center at the Children's Hospital of Philadelphia, Pennsylvania.

President Donald Trump, who has yet to be seen in public wearing a face mask during the coronavirus pandemic, said on Wednesday he would have "no problem" doing so, while reiterating his belief that the contagion will just "disappear."