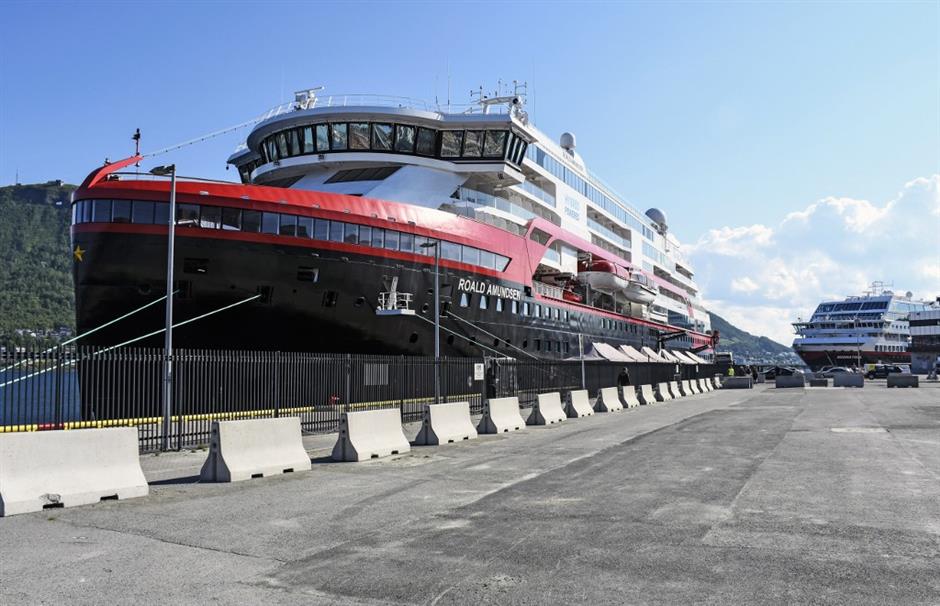 A picture taken on July 31, 2020 shows expedition cruise ship MS Roald Amundsen moored at a quay in Tromso. At least thirty-three crew members onboard the ship owned by the Norwegian company Hurtigruten, a specialist in expedition cruises, have tested positive for the new coronavirus, the company said on August 1, 2020.

At least 33 crew members confined on a Norwegian cruise ship have tested positive for the new coronavirus, the company Hurtigruten said on Saturday.

Arriving at the northern Norwegian port of Tromso from the archipelago of Svalbard, the crew of the MS Roald Amundsen was quarantined on board the ship on Friday after four staff members tested positive for the virus and were hospitalised.

Of the 158 crew members on board, "33 tested positive for COVID-19, while 120 tested negative," Hurtigruten said in a statement. Five people will be retested.

The company said on Friday that four crew members "were isolated several days ago because of other disease symptoms, with no symptoms of COVID-19".

"There was no reason to suspect COVID-19 when the ship docked in Tromso based on the symptoms they were showing," Hurtigruten said.

Those four crew members are "foreign nationals", according to the hospital.

The ship had nearly 180 passengers on board since departing on July 25. None of the passengers reported symptoms related to coronavirus during the voyage, Hurtigruten said.

All passengers disembarked the ship on Friday but about 60 people have since been quarantined in Tromso, the cruise line said on Saturday.

The Norwegian Institute of Public Health has not ruled out the possibility of more cases emerging, "but we will only have the answer once the tests have been carried out". It recommended all passengers remain quarantined while awaiting their results.

On Friday, Norway had 9,208 confirmed cases of coronavirus.

One person died of the virus on Friday night, bringing the country's death toll to 256. It was the first coronavirus-related death in the Nordic country in two weeks.