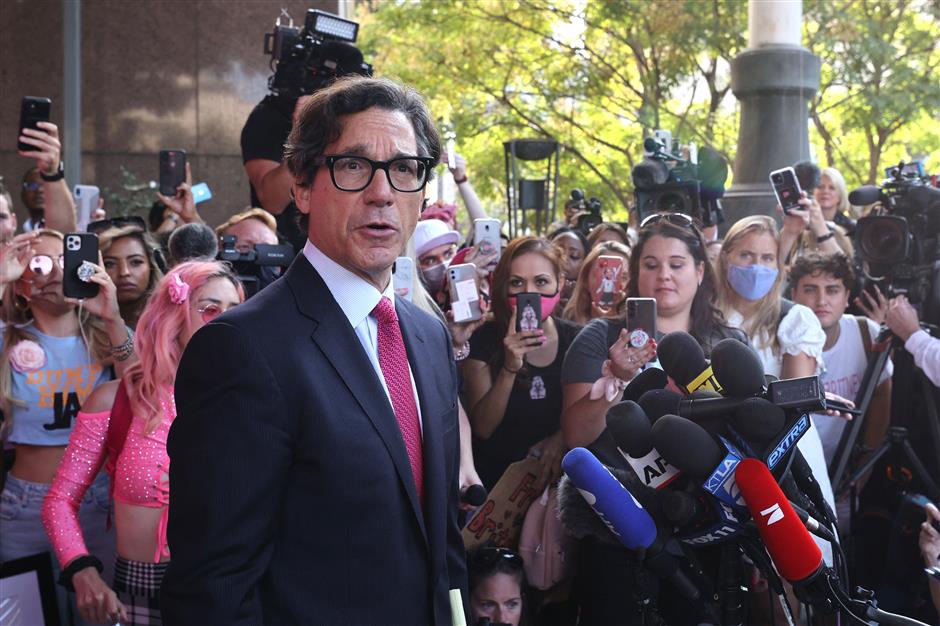 Spears' attorney Mathew Rosengart speaks to the press and #FreeBritney activists after a hearing in which Spears' father, Jamie Spears, was removed by a judge as conservator of her estate at the Stanley Mosk Courthouse on September 29, 2021, in Los Angeles, California.

Britney Spears' father was removed from his controversial role as his daughter's guardian on Wednesday by a Los Angeles judge, ending a long and bitter legal battle by the pop princess.

Jamie Spears was suspended with immediate effect and replaced with a temporary conservator "in the best interests" of the singer, said Judge Brenda Penny, calling the present arrangement "untenable."

"Mr Spears is ordered to turn over all the conservatorship assets," said Penny.

Spears' father has controlled her life for the past 13 years, under a legal arrangement the 39-year-old US singer has slammed as "abusive."

Wednesday's move came after a years-long campaign that played out in public, and after the emergence in the last week of two new powerful documentaries featuring allegations that Jamie Spears had bugged his daughter's phone calls.

Dozens of supporters gathered outside the courtroom cheered and wept as news of the ruling emerged.

Spears' fiance Sam Asghari posts a photo on Instagram of what appeared to be him handing the singer a rose.

Spears' fiance Sam Asghari took to Instagram to post "FREE BRITNEY! CONGRATULATIONS!!!!!!!!!" along with a photo of what appeared to be him handing the singer a rose.

In their motion filed this week, Spears' lawyers said: "Every day that goes by with him as conservator – every day and every hour – is one in which he causes his daughter anguish and pain."

Those claims were seemingly bolstered by a New York Times documentary released on Friday that alleged Jamie Spears had surveillance devices secretly installed in his daughter's bedroom to record her conversations.

"It really reminded me of somebody that was in prison," a former security firm employee told the "Controlling Britney Spears" filmmakers.

The pop star's lawyers said the Times' allegations about her father showed "horrifying and unconscionable invasions of his adult daughter's privacy."

Another new documentary – Netflix's "Britney vs Spears," released on Tuesday – claims the singer twice tried to hire her own lawyer in the early years of the conservatorship, but was denied.

In July, Spears was finally successful in appointing her own lawyer – Rosengart – and last month, her father filed a petition for the conservatorship to be ended.

The judge appointed accountant John Zabel as a temporary conservator of Spears' estate, in an arrangement she said can last until the end of the year.

Jamie Spears' lawyers repeatedly objected to his suspension, disputing the Times' allegations and questioning the veracity of his daughter's testimony that the conservatorship amounted to "abuse."

"There is not a shred of evidence to support suspension," said Vivian Thoreen, via video call.

Jamie Spears' 13-year record as guardian had been "impeccable" and he should not be temporarily replaced but instead the entire guardianship should be terminated immediately, they argued.

Rosengart insisted that this was simply a tactic and said Jamie Spears was afraid he would have to turn over "evidence of his corruption and worse."

Jamie Spears' immediate suspension is "what my client Britney Spears – who has been abused by this man not only for the past decade but since her childhood – wants and deserves," said Rosengart.

"Please hear the plea of my client" to "end this Kafka-esque nightmare," he added. 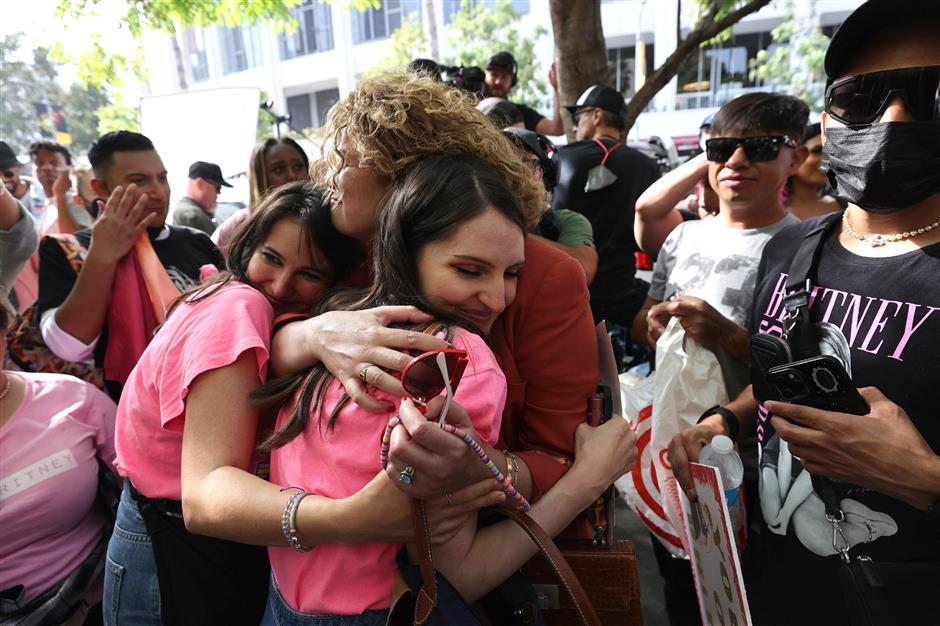 #FreeBritney activists react after news that Britney Spears' father, Jamie Spears, was removed by a judge as conservator of her estate at the Stanley Mosk Courthouse on September 29, 2021, in Los Angeles, California.

Spears' representatives and fans have long accused her father of profiting from the guardianship, which was set up after a highly public 2007 breakdown when the shaven-headed star attacked a paparazzo's car at a gas station.

The lawyers have said her father was "never fit to serve," citing in their petition allegations of his "reported alcoholism" and "trauma he caused his daughter since her childhood."

A hearing expected to formally dissolve the conservatorship will be held on November 12.