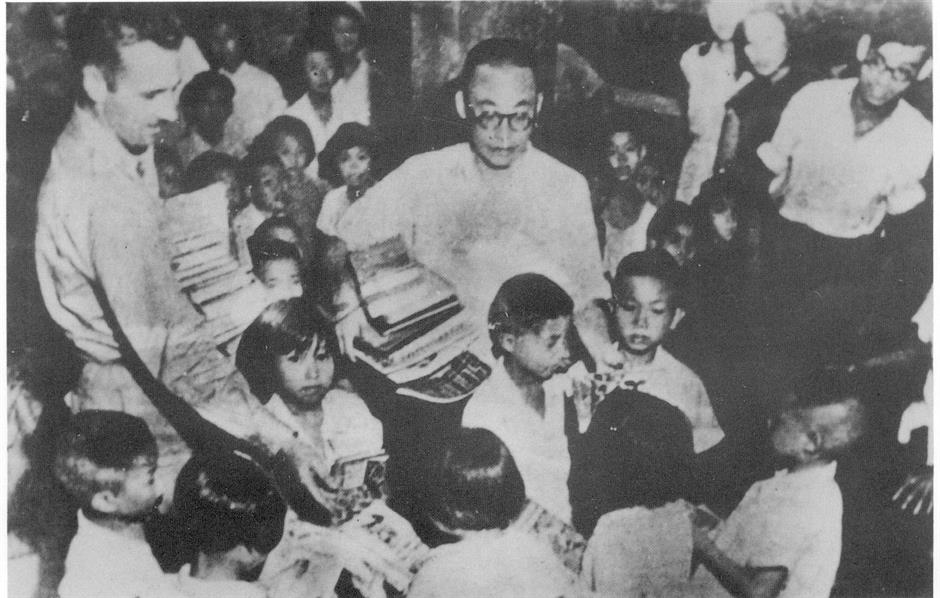 The legacy of China's celebrated educator and reformer Tao Xingzhi, who devoted his life to promoting mass education in China, especially in rural areas, is still inspiring the teachers and students of Shanghai's northern Baoshan District.

"Coming with my whole heart, demanding not half a straw," Tao's motto has become the key principle of schools in Baoshan, where Tao established an influential worker's school and promoted his innovative teaching methods in the 1930s.

The teaching methods Tao developed, such as the "Little Teacher" campaign, which encourages young students to serve as teachers to promote education, have been optimized and are still being endorsed in many schools in Baoshan.

The Tao Xingzhi Memorial in the district's Dachang Town, where the school was initially founded, attracts tens of thousands of visitors every year.

The memorial was initially built in 1986 and relocated to Xingzhi Park, named after Tao, in Dachang in 2002. The building blends the traditional architectural styles of Shanghai's neighboring Anhui and Jiangsu provinces.

A major renovation was launched in 2016 to better combine and develop the memorial and the park into an "education innovation zone." A 6-meter-tall bronze statue of Tao has been erected in the park to honor his contribution to China's education industry.

The initial part of the exhibition reviews Tao's early years, when he went from being a poor villager to an outstanding graduate of Columbia University.

Born in neighboring Anhui, Tao was the son of a bankrupt merchant, and his family was unable to afford his schooling. When he was 6, a local village scholar discovered that the boy was very bright and keen to study, so he financed Tao's primary education.

When Tao was 15, he was enrolled in a missionary school in Shexian County where his mother was a helper. Upon seeing his talent, the school's principal waived his tuition fee. Tao completed three years of study in two years' time. 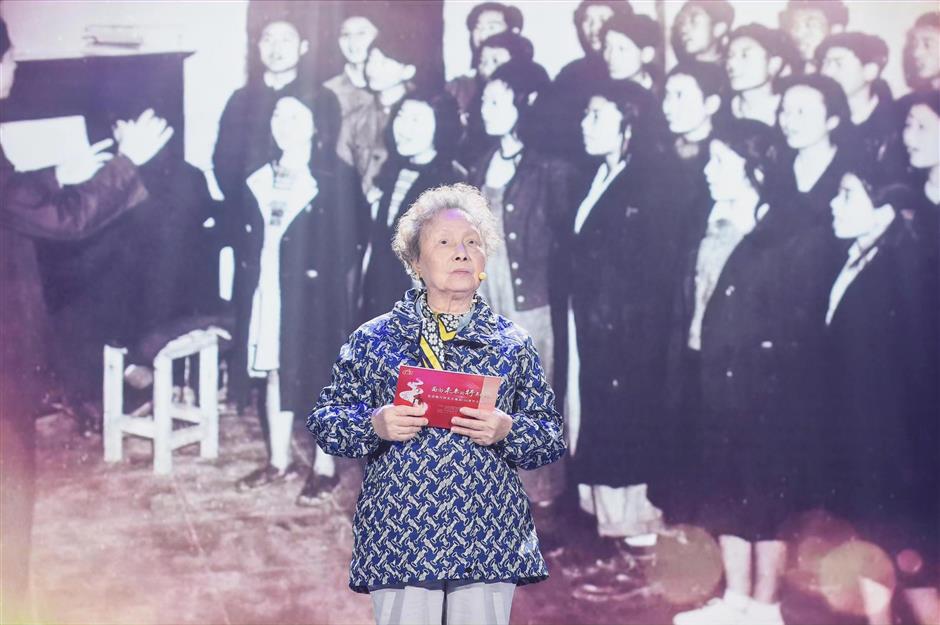 A former student of Yucai School recalls her school days with Tao Xingzhi at a commemorative event on Monday.

In 1909, with financial aid from a church, Tao studied Chinese literature at Nanking University, which merged a year later with the Private University of Nanking, in today's Nanjing in neighboring Jiangsu Province.

The motto of the university and part of Tao's curricula are displayed in the memorial in Baoshan. He studied Chinese literature, English, French, mathematics, physics and philosophy at the university.

The university's newspaper, founded by Tao, is exhibited along with his graduation photo and paper.

Huang Yanpei, then education minister of the Jiangsu provincial government, once described Tao as the "top talent of Jinling (the old name of Nanjing)."

After graduation in 1914, Tao continued his education in the United States, where he obtained a master's degree in political science at the University of Illinois.

He then went on to study education under the guidance of John Dewey, an American psychologist, philosopher and educational reformer. Dewey was a major representative of progressive education and liberalism.

But when Tao returned to China in 1917 and began his own career as a liberal educator, he did not blindly champion Dewey's progressive education.

Instead, he changed the American educator's motto of "Education is life itself" into "Life is education." He even changed his original given name Zhixing or "knowledge-action" into Xingzhi or "action-knowledge."

Meanwhile, Tao also preached his ideas of "society as school" and "integration of teaching, learning and acting."

A multimedia exhibition at the end of the first section guides visitors to experience and understand the development of Tao's education principles. 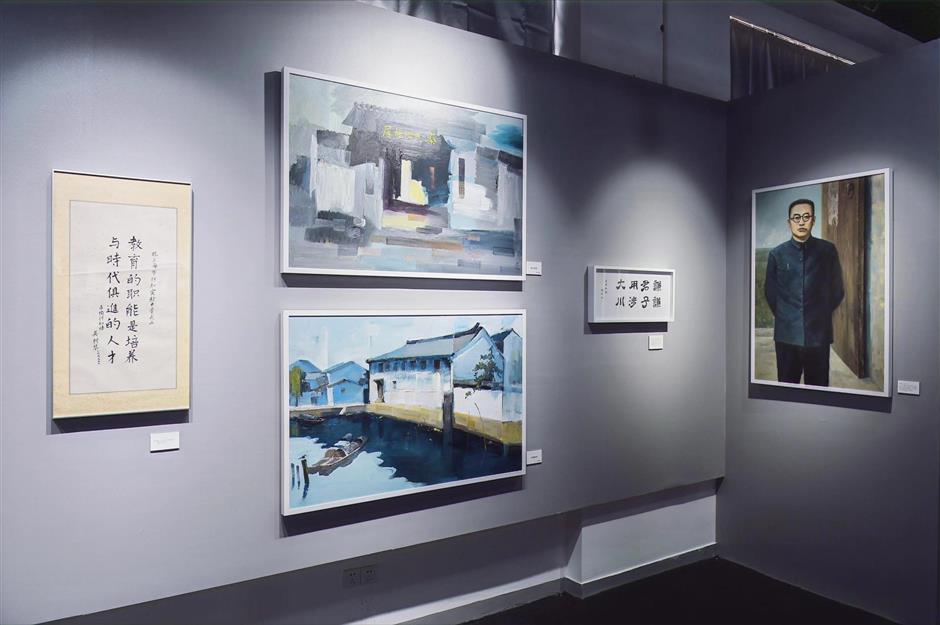 An exhibition about Tao Xingzhi at Shanghai Xingzhi Experimental Middle School in Baoshan.

The second part of the exhibition shows how Tao promoted education at a domestic university among the public and across the nation's rural areas.

He served as the lecturer and director of the education department at Nanjing Normal University and launched a series of education method reforms.

Dewey was invited to give lectures in China between 1919 and 1921. Arranged by Tao and other Chinese educators such as Guo Bingwen and Hu Shi, Dewey visited 11 provinces across China and profoundly impacted the country's education system.

To promote mass education, Tao joined hands with Y.C. James Yen, another liberal educator, in organizing a National Association of Mass Education Movements. They recruited thousands of volunteer teachers who at one time taught as many as 5 million students around the country.

In 1927, Tao set up Xiaozhuang Normal College in a village in the northern suburbs of Nanjing to train teachers who would teach in rural areas after their graduation.

Later, he had also launched the Life Education Association and the Work-Study Movement.

The other parts of the exhibition mainly highlight Tao's contribution during China's war against Japanese aggression (1931-1945).

Tao founded the workers' school titled Shanghai Gongxuetuan, which means "Work, Science and Solidarity," in Dachang, Baoshan District in October 1932. He organized young workers and farmers to study while working.

A short video reviews the establishment of the school and its influence across the country. The school recruited the first batch of 40 students, who were asked to study in the morning and work as carpenters, painters, farmers, and spinners in the afternoon. 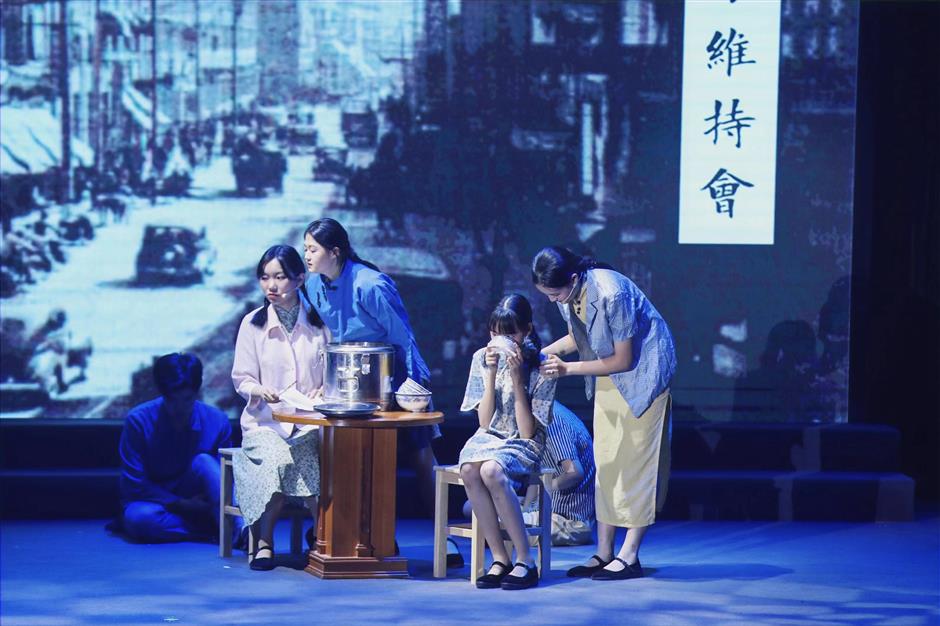 Under Tao's guidance, over 18,000 "little teachers" were recruited in Shanghai within 10 months.

The campaign was later expanded to 28 provinces and cities as a key nationwide education movement.

The campaign even became influential abroad in Japan, India, Myanmar, Indonesia and Singapore.

Tao also led the creation and spread of simple folk songs to encourage more farmers, women and children to join in the fight against the Japanese invaders.

In 1939, he founded Yucai Middle School in the suburbs of Chongqing, then the interim capital of the country. He offered free education to refugee children and children of the Communist Party of China members.

However, due to his sympathies with Communist Party leader Mao Zedong's policies regarding fighting the Japanese invasion and his own liberal thinking, Tao was frequently harassed by the secret police.

The last part of the exhibition reviews how Tao spent his last 100 days in Shanghai in 1946.

After the assassination of two fellow patriotic intellectuals, Li Gongpu and Wen Yiduo, Tao said that he was ready for the "third bullet."

In 1945, he joined the China Democratic League and then moved to Shanghai, where he worked frantically to advocate for democracy and called on all social sectors to fight against dictatorship and to head off a looming civil war.

In the last 100 days of his life, Tao made more than 100 speeches in schools, factories and public squares. He died of a cerebral hemorrhage in Shanghai on July 25, 1946. He was 55.

After learning of Tao's death, Zhou Enlai, a Communist Party leader and later the first premier of the People's Republic of China, rushed to his home to pay his last respects to the great educator and reformer. Zhou called Tao a "non-Party Bolshevik."

Molds of Tao's face and hands, made by his friends after his death, are displayed at the memorial in Baoshan to commemorate the great Chinese educator.

It also showcases one of Tao's key education principles to encourage students to use both hands and mind. 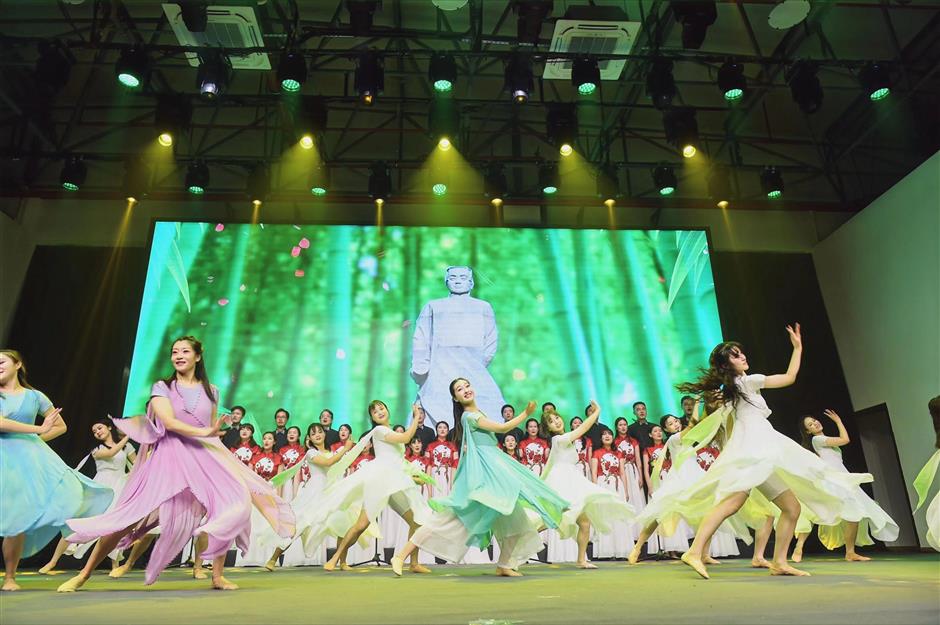 Baoshan continues to espouse Tao's teaching method in its elementary and middle schools.

The "Little Teacher" method encourages students to share their knowledge and understanding with others through critical thinking.Under the method, students in Baoshan are learning more actively to make themselves qualified teachers, according to Baoshan's education committee.

The district has also developed a "three-card teaching" method based on Tao's legacy. Students are required to write down learning targets, key and difficult points, as well as other important knowledge on a "preparation card."

Teachers then create a "cooperation card" along with the students with answers to difficult questions they have.

The "practice and reply card" includes a consolidation of quizzes and knowledge as well as summaries of material they've learned.

The "three-card" method has been widely promoted for Chinese, mathematics and English classes across elementary and middle schools as well as kindergartens, the committee said.

Another key method, called "learning based on questions," has been developed from Tao's ideas. Students are invited to raise questions boldly and find solutions with the help of their teachers.

Teachers are required to teach students how to study by themselves apart from simply teaching students while leading students to enjoy the learning process.

Seven experimental bases for the "learning based on questions" method have been established and over 30 schools in Baoshan have been practicing the idea.

To further promote these innovative teaching methods, the memorial has developed a bilingual virtual reality website for teachers and students to learn Tao's teaching methods.

The "Little Teacher" campaign has been expanded to communities in Baoshan. Students are encouraged to serve in the role of teachers in social governance. Over 78,000 Young Pioneers in Baoshan serve 487 neighborhoods.

They have visited over 3,000 seniors living alone and removed garbage from over 20,000 public areas.

At the Platinum Mansion in Baoshan's Dahua Community, the "little teachers" are recruited to serve as community designers. The young students are invited to paint an old transformer substation in a "rainbow house."

A civic affairs committee has also been established with nine students between 7 to 14 years old serving as the president and at other key posts.

The committee hosts regular meetings to solve all kinds of community issues raised by residents. 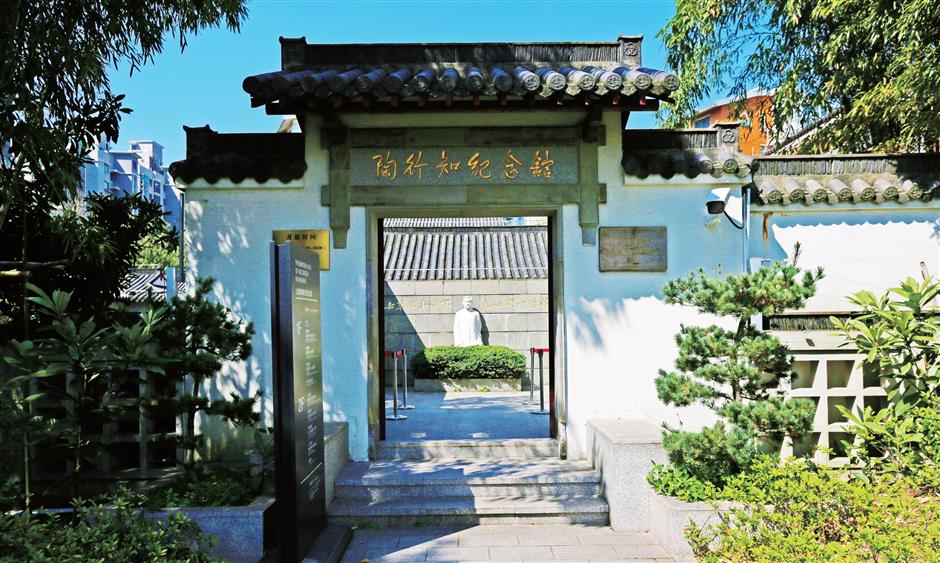