A Chinese doctor in white coat checks a patient’s tongue, feels his pulse, asks about his physical condition and prescribes treatment accordingly such as acupuncture, herbal medicine and daoyin or qigong exercises.

It’s a common scene at a Traditional Chinese Medicine hospital in China, but this has also been routine at the Research Center for TCM in Hradec Kralove, the Czech Republic, for the past three years. 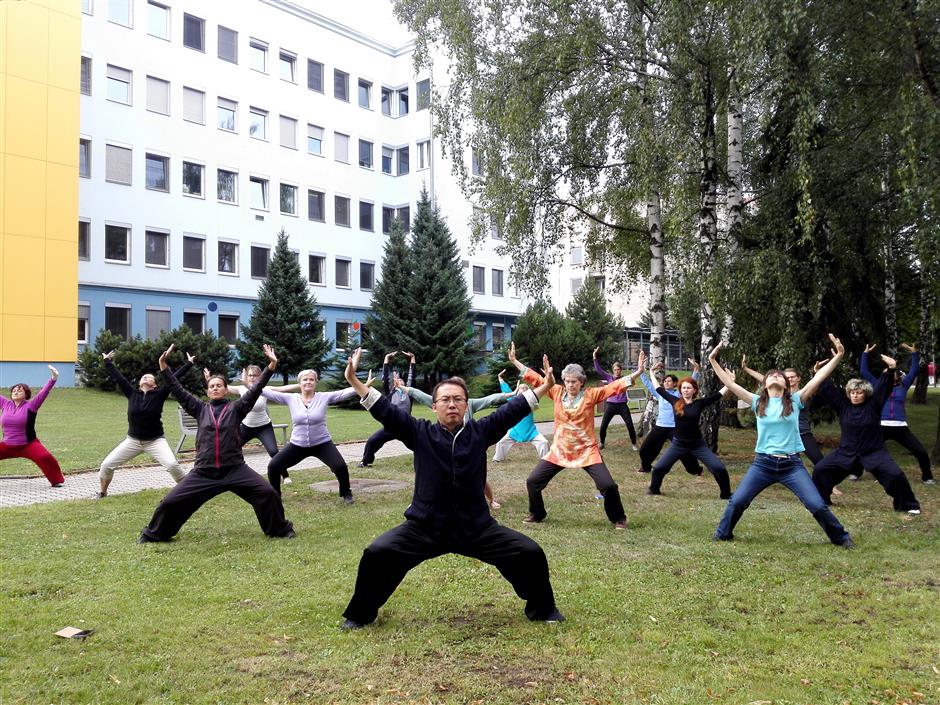 The center, founded by Shanghai Shuguang Hospital attached to Shanghai University of TCM and the Faculty Hospital Hradec Kralove attached to Charles University in 2015, is the first TCM center supported by the government in Central and Eastern Europe, as a crucial component of the Belt and Road Initiative.

The center, the first of its kind in a public hospital in the West, is expected to lead to better medical exchanges, recognition of TCM by the Western public and possibly TCM-related laws in the future, according to Zhou Hua, president of Shanghai Shuguang Hospital.

Officially opened in June 2015, the center has a team of TCM doctors from Shuguang Hospital, doctors and nurses from the Faculty Hospital Hradec Kralove and translators. The Hradec Kralove doctors collect basic information from patients and then transfer them to the Chinese doctors for further diagnosis. And the translators help with the communication between the Chinese doctors and patients.

The center has received around 26,000 patients from all over the Czech Republic for the past three years, with ailments that have included headaches, tinitus, sinusitis, irritable bowel syndrome, Crohn’s disease, chronic coughing, irregular periods and infertility.

“It is not a big number compared with what we have in Shanghai, considering the limited hands there. But a good reputation of Traditional Chinese Medicine and TCM doctors has been gradually shaped, which may pave the way for further possible moves,” said Zhou.

According to Hradec Kralove figures, the effective rate of TCM treatments at the center averages 55 percent, and around 80-90 percent of patients feel positive about treatment, either finding their ailments gone or symptoms relieved.

As the longest-serving Chinese doctor at the center since 2016, 42-year-old Guan Xin has witnessed that patients’ attitudes toward TCM have changed from curiosity to trust.

“About 90 percent of my early patients at the center were having their first try of TCM, though some of them had heard about the mysterious medicine from the East,” Guan said.

At first when Guan asked them to show their tongues, some elderly patients considered it an impolite gesture. But once told about TCM’s belief in a person’s physical condition reflecting on their tongues, they were happy to do so.

Sufferers from chronic problems made up the majority of patients who came to the TCM center for help, according to Guan. Pains in the head, joints and muscles accounted for around half the total number.

“Those patients first came for a try and kept revisiting for effective relief,” Guan said.

One of Guan’s patients was a woman in her 50s who had suffered headache for more than 20 years. Taking painkillers was the only effective relief. Yet, after just 15 TCM treatments, she has been free of pain for two years. 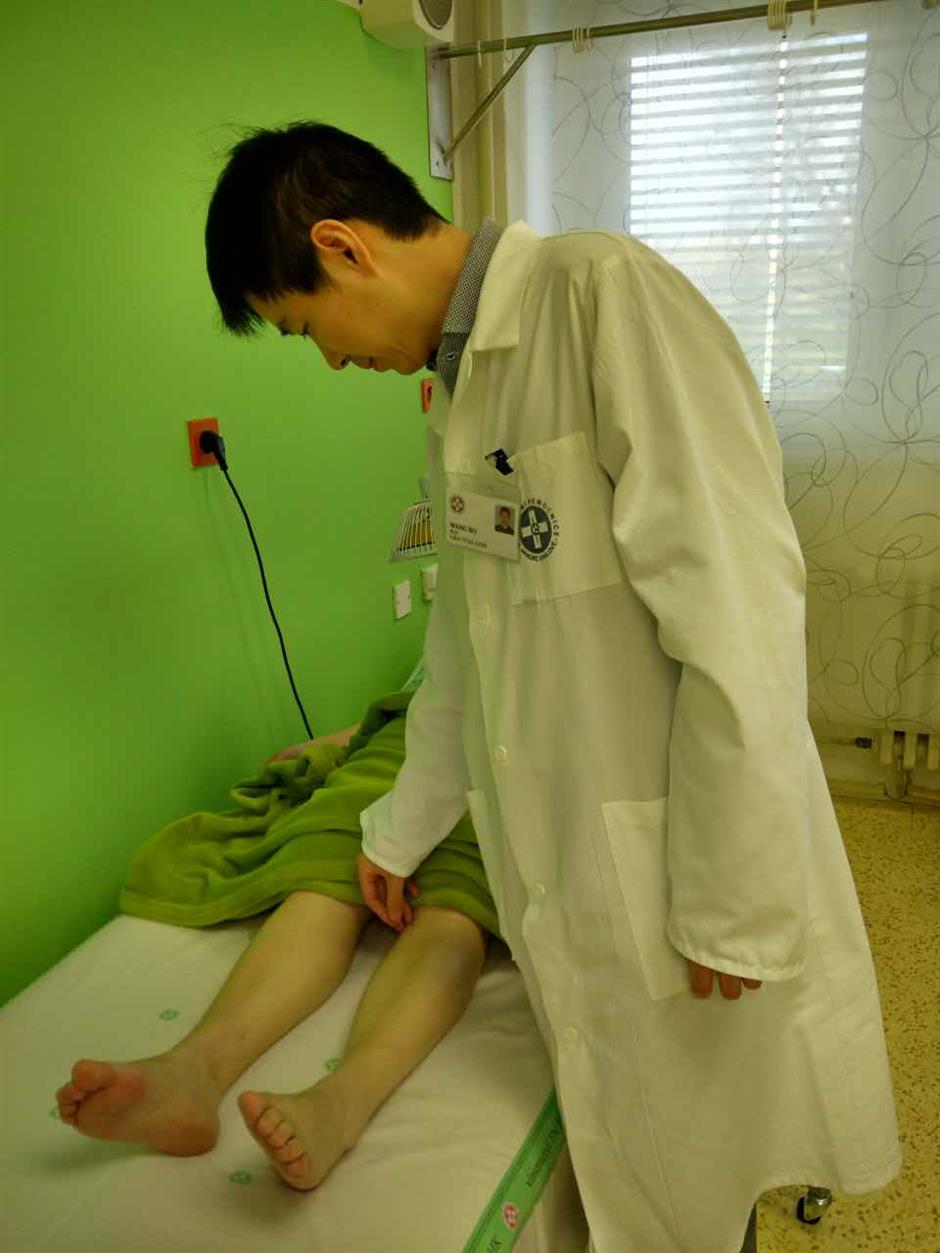 A male patient drives more than three hours to the center for a 20-minute treatment, as it instantly cures his migraine.

As a master of yijinjing (literally tendon changing exercise), Guan also started a daoyin class once a week, during which he teaches traditional Chinese health-benefiting exercises such as yijinjing, baduanjin and tai chi, as additions to acupuncture and medication. A young man from Prague suffering digestive problems for two years found the exercises effective in not only curing his stomachache, but also his hay fever.

Chinese doctor Ma Wen, 37, who completed a one-year residency at the center in July, said: “Many Czech patients seem to know clearly what happens in a TCM clinic, and most of them keep very good compliance to doctor’s suggestion.”

Not covered by national medical insurance, each course of diagnosis and treatment at the TCM center costs about 5,000 Czech crowns (US$230), accounting for about a sixth of residents’ average monthly income. Yet, demand exceeds supply, with every Chinese doctor receiving 15-30 patients a day. New patients need to book six to 12 months in advance to get an appointment.

With people coming with all kinds of problems, the TCM doctors are mastering diagnosis and treatments in almost every aspect, such as internal medicine, surgery, gynecology, dermatology, orthopedics and traumatology.

“To some extent, the patients are actually helping we Chinese doctors returning to the original TCM practices as a general medicine taking human body as an integrity, though subdivision departments prevail in most TCM hospitals in China today,” said Guan. “It is a challenge, but also a great platform to perfect our capability as a real TCM doctor.”

The availability of TCM herbs can be a problem for the center, according to Ma. “It is never a rare case to find important ingredients for certain classic empirical formula missing, as they are not permitted in the EU market,” said Ma. “We sometimes try replacing them with other available herbs with similar function though not that strongly effective. Yet some times, we had no choice but give up herbal medicine therapy and make do with acupuncture.”

Chinese doctors at the center are trying to figure out better treatments for the more difficult cases they encounter by researching the TCM classics, consulting with experts in China and holding discussions with their Czech colleagues.

The effectiveness of TCM practices, a growing popularity of “green medicine” worldwide, and the accumulated medical exchanges between China and the rest of the world in the past 20 years may all have played a role in the good reception of TCM doctors in the Czech Republic, according to Zhou.

Though there are still many obstacles for TCM practices in European counties with few related laws and policies available, there has been progress. According to Zhou, a law on prepared Chinese herbal medicine is pending approval in the Czech Republic, thanks to the TCM center in Hradec Kralove.

A new building with 30 hospital beds and a series of TCM facilities will be completed next year as a new location for the TCM center to serve more patients. More Chinese doctors will be selected to work there.

A Chinese doctor teaches a Czech patient an exercise to aid her recovery.

“Traditional Chinese medicine is a treasure trove not just for Chinese, but the world as well,” said Zhou.

“I hope that the TCM center at Hradec Kralove will become a base from which TCM will be accessed, received and recognized by the ordinary European, and thus drive related law and policy making which would enable TCM to benefit more people. And of course, feedback from European patients, doctors and government may also enlighten us about possible direction for further TCM development. I am optimistic.”