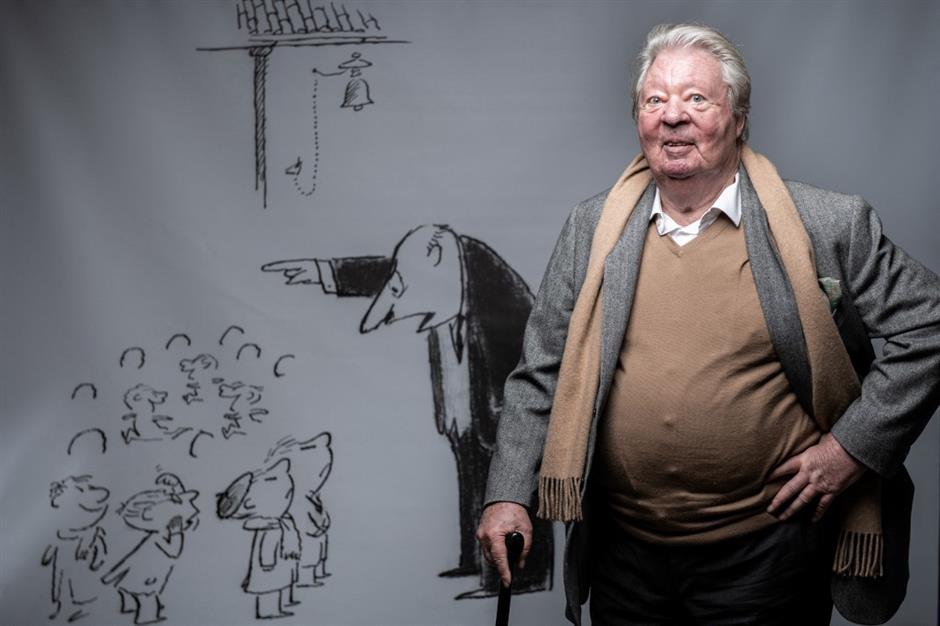 In this file photo taken on November 6, 2019 French cartoonist and illustrator Jean-Jacques Sempe, also known as Sempe, poses during a photo session in Rueil-Malmaison, outside Paris.

As well as his work on "Le Petit Nicolas," an idealised vision of childhood in 1950s France that became an international best-seller, Sempe also illustrated more New Yorker magazine covers than any other artist.

"The cartoonist Jean-Jacques Sempe died peacefully (Thursday) evening... at his holiday residence, surrounded by his wife and his close friends," Marc Lecarpentier, his biographer and friend, told AFP.

Sempe, who originally wanted to be a jazz pianist and had a difficult childhood, dropped out of school aged 14 before lying about his age to join the army.

Army life didn't agree with him, however, and he began selling drawings to Parisian newspapers.

While working at a press agency, he befriended cartooning legend Rene Goscinny of "Asterix" fame and together in 1959 they invented "Little Nicolas."

"The Nicolas stories were a way to revisit the misery I endured while growing up while making sure everything came out just fine," Sempe said in 2018.

Today, the books are international best-sellers, with more than 15 million copies sold in 45 countries and regions, and have been adapted into a popular film and cartoon series.

But in 1959 they went largely unnoticed, and he continued to sell drawings to newspapers to make ends meet, an early career he described as "horrible."

It was only in 1978 when he was hired by The New Yorker that he found sustainable success.

"I was almost 50 and for the first time in my life, I existed! I had finally found my family," he said.

Sempe was born near Bordeaux in the village of Pessac in 1932, the illegitimate son of an affair his mother had with her boss.

He lived in an abusive foster home before his mother took him back, only to subject him to her own violent streak.

"Come closer, I'll slap you so hard the wall will slap you back," he remembered her telling him.

They lived with his alcoholic stepfather. Sempe's true paternity was a mystery that would haunt him for life.

"You don't know who you are, what you're built on," he later said.

In his work, Sempe put diminutive characters in an outsized world of soft lines, revealing amusing and sometimes caustic truths about the world without ever resorting to mockery.

But the kindness that Sempe showed his subjects was in stark contrast to the misery of his own upbringing.

"You never get over your childhood," he revealed well into his 80s, having avoided the subject for decades.

"You try to sort things out, to make your memories prettier. But you never get over it."

For many years, Sempe refused to believe in his talent, attributing what he achieved to hard work and sacrifice.

The artist said he could spend as long as three weeks getting a single drawing right and that he was capable of anything – "not bathing, not sleeping" – to finish work on time.

"The jazz, the tender irony, the subtle intelligence ... we will not be able to forget Jean-Jacques Sempe," French President Emmanuel Macron wrote on Instagram.

"With tenderness, poetry and mischief... he taught us to look at the world with the eyes of a child," she tweeted.