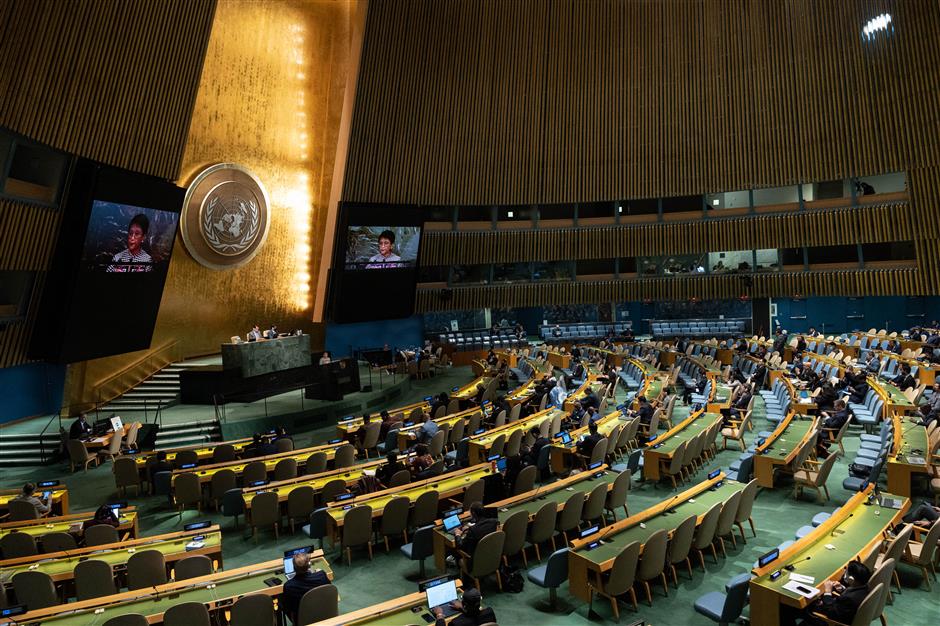 This year's general debate of the UN General Assembly concluded on Monday, after representatives of 190 member states spoke around the theme of "A watershed moment: transformative solutions to interlocking challenges."

Csaba Korosi, president of the 77th session of the UN General Assembly, said in his closing remarks that 126 heads of state and government took part in this year's general debate.

"The sheer number of you who took part in this debate points to the importance that the general debate holds in international affairs," said Korosi.

Korosi said he got five messages from the member states during the general debate.

The first is the growing awareness that humanity has entered a new era, he said.

"Facing complex challenges and multi-layer crises, we reached a time of paradigm shift, because the movements, the adjustments that we see around us cannot be called mere modifications any longer: they are significant transformations in the making," he said.

"The basic conditions of our global cooperation have changed. We live now in a different world – a world of new challenges, changing priorities, changing roles, and changing ways. Fresh pages of history are being written, with new divisions and new alliances, new grievances, and new successes on them," he said.

The second message is that the conflict in Ukraine should end, said Korosi.

"You also pointed out that its effect is being felt around the world. You described the pain of shortages, inflation, the impact of refugees as far as South America and Africa, concerns about the safety of nuclear plants, and fears of a nuclear attack. You also highlighted the dangers of misinformation and propaganda," he said.

The third message is that climate change is gradually destroying humanity, he said.

"We heard about countries simultaneously experiencing droughts and flooding. We spoke about unsustainable patterns of production and consumption, eating up the fish and filling our waters with plastics, even as waves of rising seas drown shorelines. We heard calls to achieve global net-zero (emissions) and appeals to assist the countries most affected by climate change, not of their own making. We heard clearly the calls for climate justice and honoring commitments," he said. "Yet, some of us still seem not convinced that growing our economies can be balanced with limiting emissions and preserving biodiversity."

Fourth, calls for improving the state of human rights and meeting the needs of those most vulnerable to exploitation were heard, said Korosi.

The fifth key issue, for which there is strong support, is the need to modernize the United Nations, revitalize the General Assembly and reform the Security Council, he said. "This is in line with my own conviction that the General Assembly should be ready to respond better to the interlocking crises and that the Security Council must reflect the realities of this century."

Korosi called for collective action to tackle the challenges.

"We are all in agreement on the main challenges. We want a peaceful post-COVID world with increased trust, where we can work together to mitigate and adapt to climate change," he said. "To make progress, during the whole session ahead of us, we need to build on what unites us. We also may wish to seek ways of how to focus on the most burning challenges and frame them in terms of crisis management and transformation."

"In order to deepen solidarity, we must build trust," he added.

Korosi said he plans to launch a series of consultations with many actors, including the scientific community, after the conclusion of the general debate, with the aim to strengthen universally accepted and owned foundation for action.

"Our opportunity is here and now. Let us act," said Korosi.

The general debate is an annual gathering of heads of state and government as well as other high-level representatives of UN member states at the beginning of the new session of the General Assembly.

This year's general debate is the first time since the start of the pandemic that world leaders are asked to make their statements in person in the General Assembly Hall, but was impacted by the funeral of British Queen Elizabeth II on September 19, as the original list of speakers for the debate had to be extensively modified to accommodate the late arrivals of dignitaries who traveled to London for the funeral.