Acupuncture, the ancient Chinese medical technique, and anesthesia, the common Western way of putting patients to “sleep” for surgery, combine at a hospital in Shanghai. Patients benefit.

Dr Chen Tongyu, from Shanghai Yueyang Hospital of Integrated Traditional Chinese and Western Medicine, is one of the leading surgeons using a technique called acupuncture anesthesia to help patients better endure surgery, suffer less of the trauma and potential complications of anesthesia and enjoy a quicker recovery. 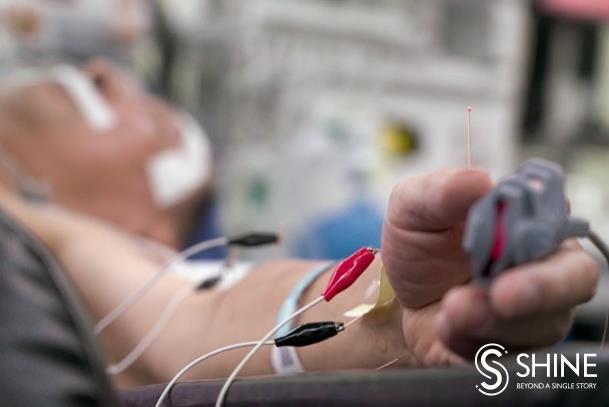 “Led by hospital President Zhou Jia, we started to study the combination of acupuncture and modern anesthesia in surgical use since 2005,” Chen said. “Through continuous research and trials, we created a new method of acupuncture anesthesia by using acupuncture and small amount of anesthetics to achieve better effects than purely one method or the other.”

He added, “Acupuncture working with anesthetics gives patients a light sleep while still breathing under their own accord. No tracheal intubation, which is sometimes standard for surgical anesthesia, is needed.”

“There are many nerves on the chest, so patients may feel serious pain,” he said. “That’s why pain control is so extremely important for patients undergoing such surgery. Doctors must use large doses of anesthetics. Since that can suppress a patient’s breathing, tracheal intubation is a must, along with muscle relaxants to ensure the success of intubation.”

When a tube is put down the throat and into the windpipe, patients may suffer both trauma and complications like vomiting and nausea. And the consequence of the muscle relaxants may lead to the necessity of inserting a catheter in the urinary tract.

“Acupuncture offers a solution,” Chen said. “It can ease pain, enhance the effects of anesthetics, protect the patient’s digestive system and reduce trauma and complications.” 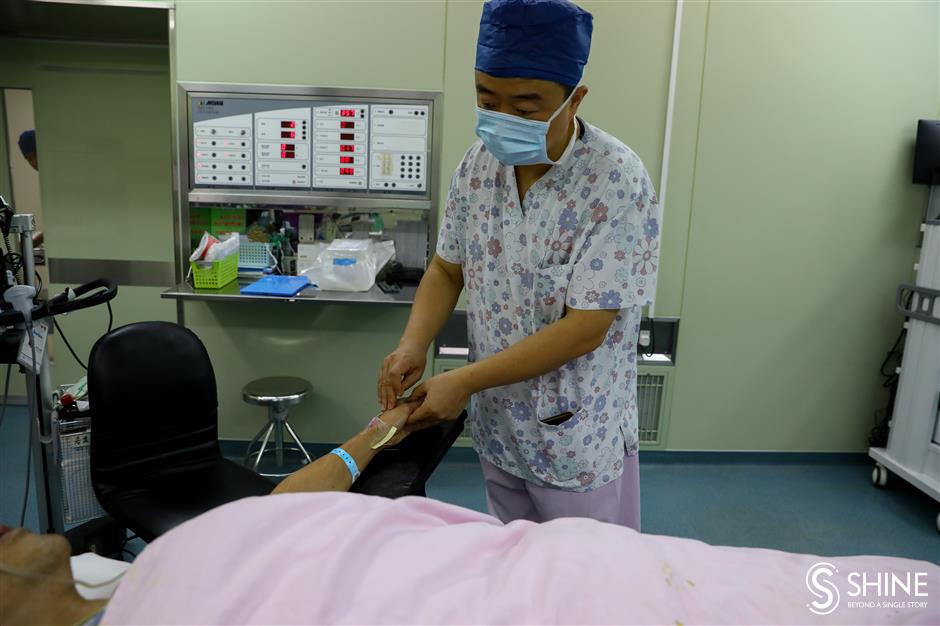 An acupuncturist at Yueyang hospital inserts needles into arms of a patient before the surgery for acupuncture anesthesia. 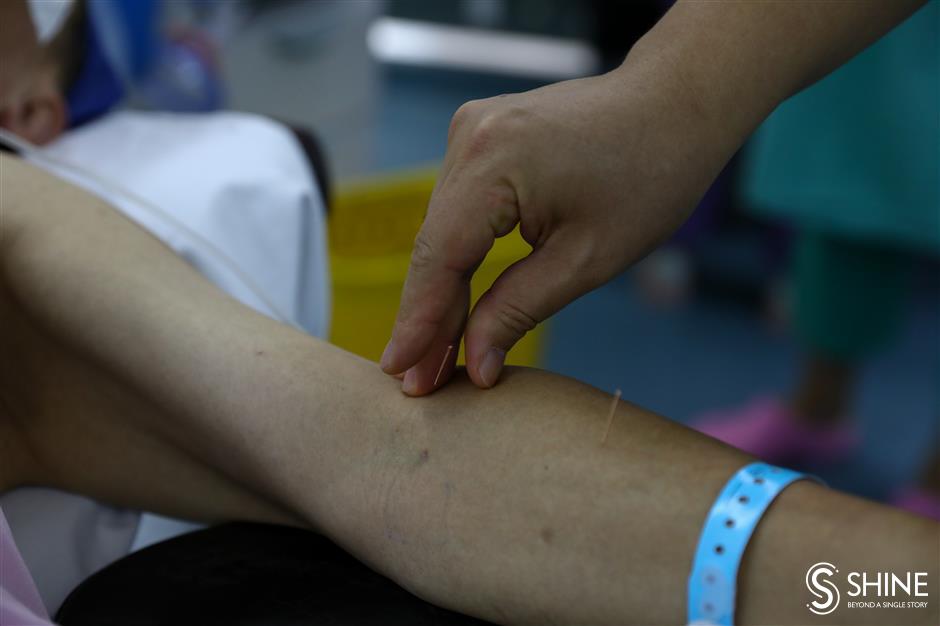 “The selection of acupoints has undergone repeated tests and trials for the best effects,” he said. “We started from some 30 acupoints and tested their strength and frequency of stimulation. We use these acupoints for easing pain, sedation and organ protection.” 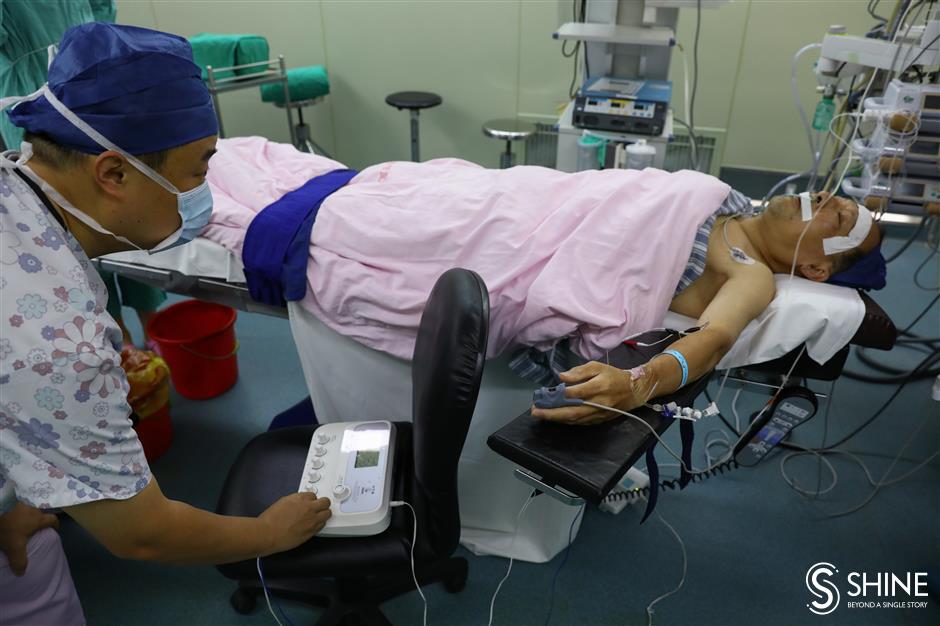 The acupuncturist connects electric wires from an electro-acupuncture instrument with the needles to control the acupuncture strength and frequency for different procedures of surgery. 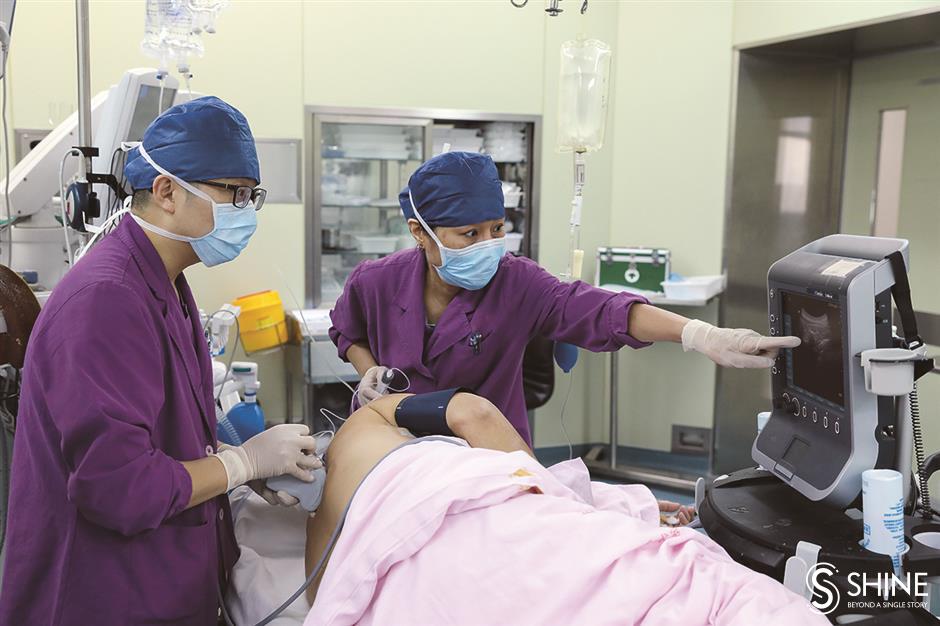 Anesthesiology has an important role in acupuncture anesthesia, he said.

“With a patient is just in a light sleep, the anesthetist closely monitors a patient’s condition during the whole process of surgery, adjusting amounts of anesthetics accordingly,” Chen said. “Good cooperation between anesthetist and surgeon ensures the success of an operation.”

Doctors stimulate different acupoints before, during and after the surgery. Before surgery, the four needles on the forehead calm the patient. During the surgery, stimulation to acupoints on the arms and legs are used to strengthen the anesthetic effect.

When the surgery ends, doctors usually keep the needles in for certain amount of time to prolong the effects of pain control, organ protection and reduction of complications.

“Acupuncture can trigger the brain to release more endorphin,” he said. “Endorphin is a morphine-like natural pain reliever produced by the body. It works like a trigger to open more gates for the entry and acceptance of narcotic drugs. So the amount of medicine needed is reduced.”

Anesthesia can be reduced by half to one-fifth, depending on the patient. On average, patients need a third less anesthesia, so the risk of related complications is also reduced.

Patients wake up soon after surgery and can start to drink water and eat. Early nourishment further speeds up recovery and the immunity of patients.

The hospital has thus far used acupuncture anesthesia in nearly 10,000 surgeries, making it the largest hospital for the technique in China. 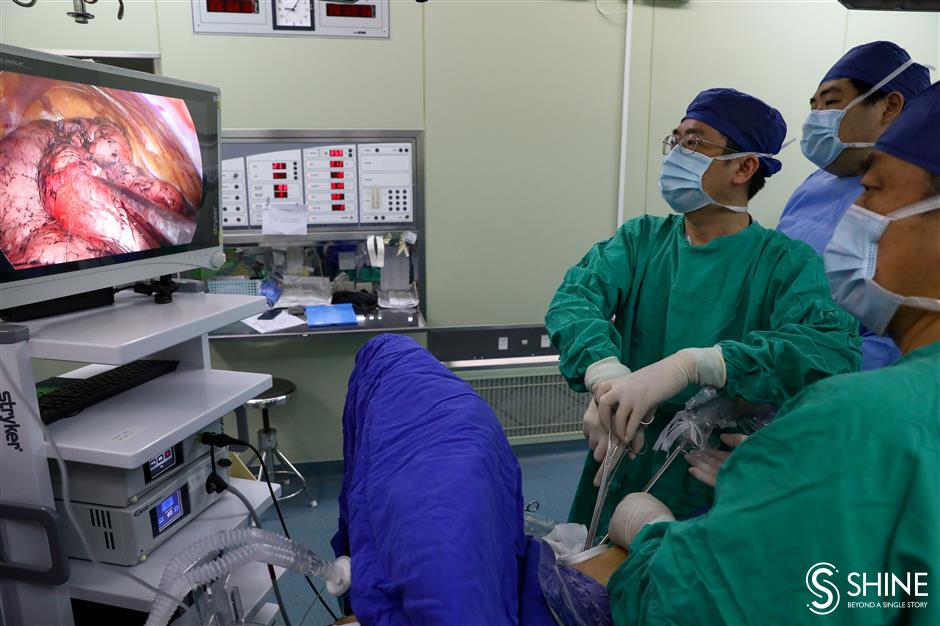 Dr Chen Tongyu (left) uses an endoscope to remove the cancerous part on the right lung of a 65-year-old patient, who is light sleep without intubation during the whole surgery.

The method is used in surgeries related to the heart, lungs, breasts, necks and brains. It is also used in procedures like colonscopy and gastroscopy.

“We mainly use the procedure in heart and lung surgeries,” Chen said. “Clinical studies have found it also effective for thoracic surgery and neurosurgery, especially in brain surgeries that need a patient to be awake at times for testing during the process.”

He said patients with early stages of lung cancer are among the biggest beneficiaries of acupuncture anesthesia.

With current CT scanning technology, more cancers are detected earlier, requiring less invasive surgery. Patients need to receive only one to three surgical incisions for doctors to use endoscopy to perform an operation. Under anesthesia, many patients would need tracheal intubation.

A 65-year-old man suffering from an early stage of lung cancer underwent surgery through acupuncture anesthesia on Wednesday morning. An acupuncturist inserted needles on his forehead and arms before surgery started.

Chen made an incision hole of less than 3 centimeters to remove a cancerous growth on the upper right lung. 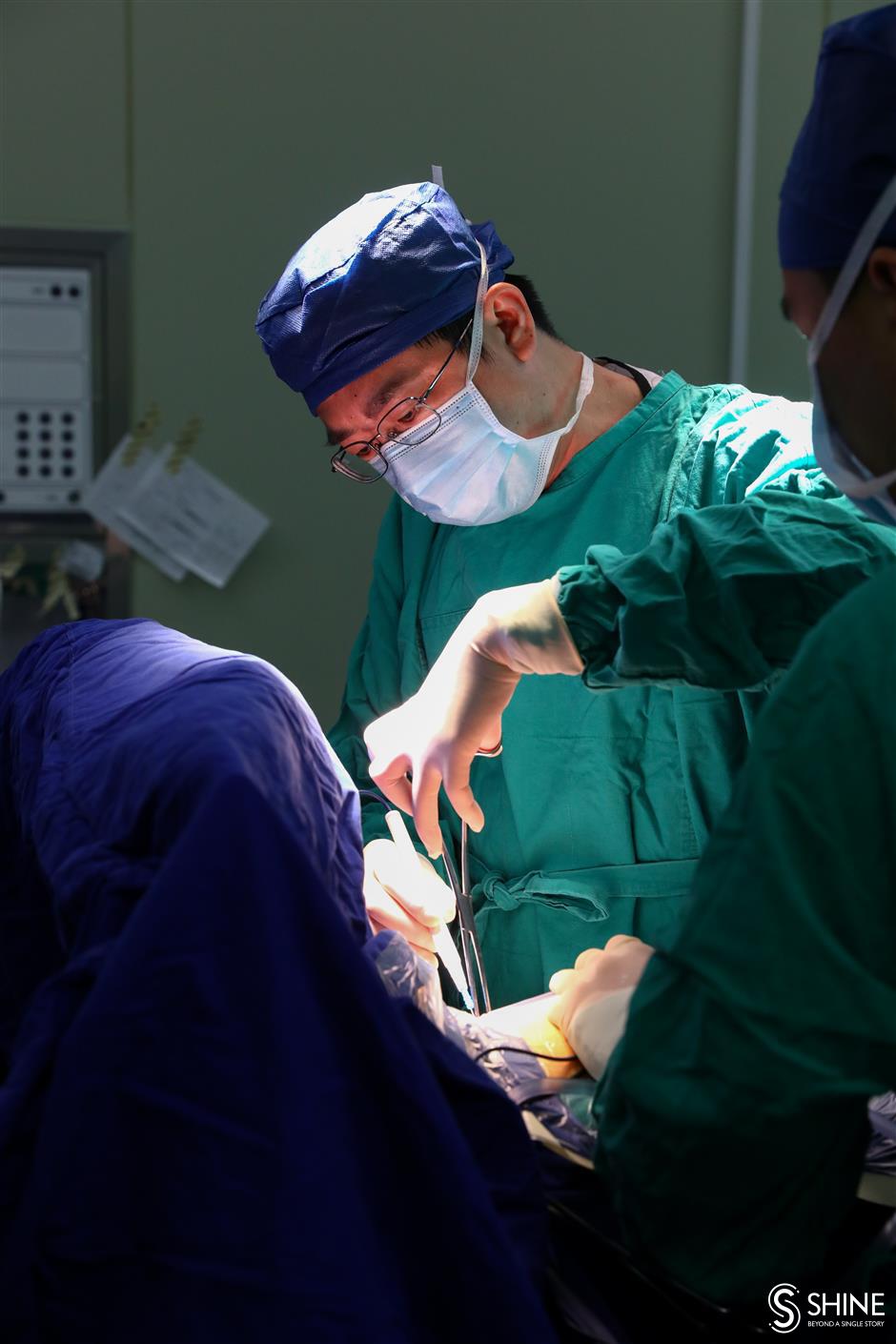 Soon after the surgery was completed, doctors patted the patient slightly to wake him up. He opened eyes immediately.

“I felt like I had been sleeping, but I knew where I was,” the patient said. “But I can’t remember what happened.”

After being moved into a post-operative room, he regained full consciousness quickly and was even able to sit up 15 minutes later.

“I don’t feel dizzy or sick,” the patient said. “There was only a slight tightness in my chest.” 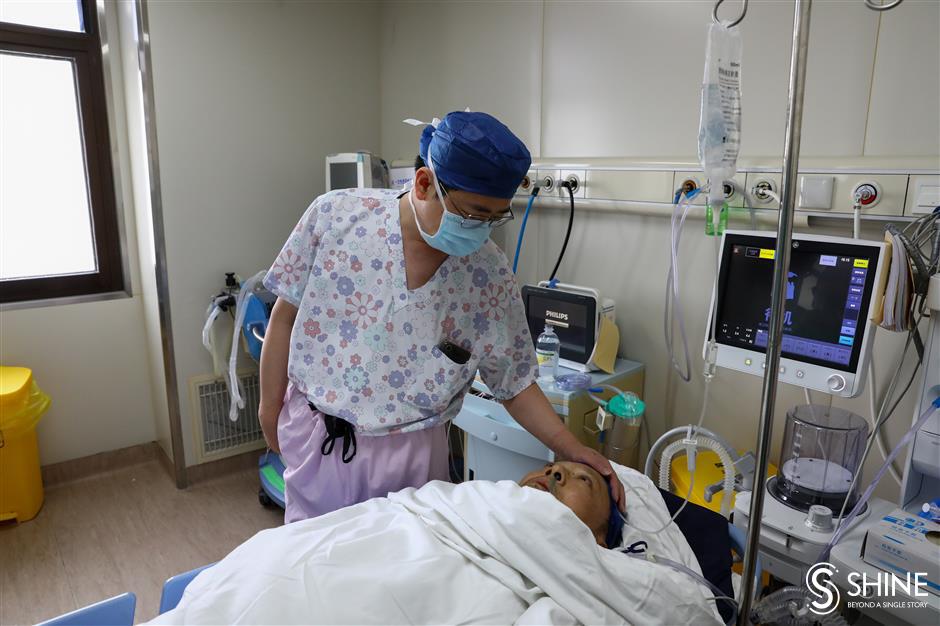 Dr Chen Tongyu talks with the patient, who wakes up immediately after the surgery. 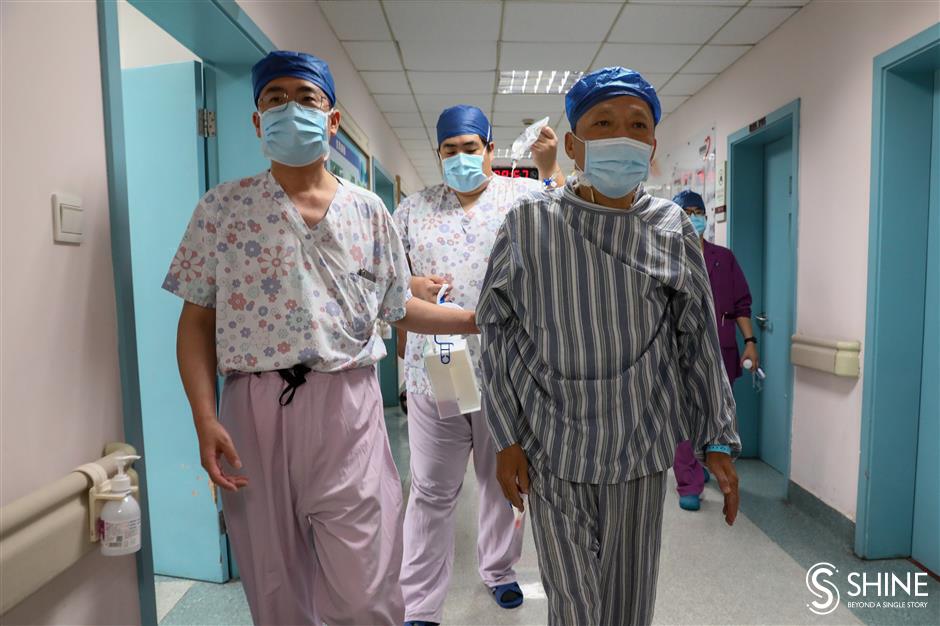 The patient is able to walk by himself half of hour after a lung cancer surgery thanks to acupuncture anesthesia.

He was moved by wheelchair back to his ward half an hour later and was able to walk by himself into an observation room soon after. He was eating and drinking liquids several hours later.

The patient was discharged two days later, without suffering any discomfort.

“It is amazing,” he commented, as he walked to greet his family.

In addition to his clinical practice, Chen and his colleagues are doing research to scientifically document the effects of acupuncture anesthesia.

“Previous research has confirmed that acupuncture can trigger extra secretion of endorphin,” he said “Our research has extracted endorphin receptors in order to further explain why and how patients need less anesthetics and how acupuncture helps open neural pathways to allow a quicker and better entry of anesthetics. Animal tests on these receptors have confirmed those effects. We will do more clinical study in the next phases.”

It is important, he added to try to document the effects of traditional Chinese techniques so they can achieve higher recognition in Western countries. 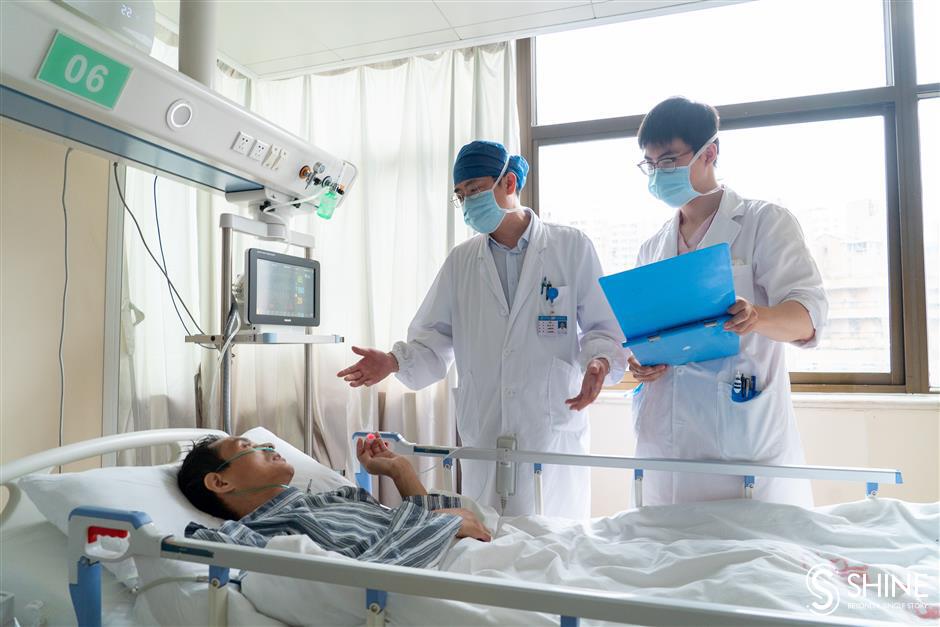 Doctor Chen talks to a patient during his daily rounds.