Medical documentary “Life Matters” held a grand sharing day at Huashan Hospital last week. The well-received new season focuses on the endeavors and touching stories of Chinese medical workers in the battle against the novel coronavirus.

The sharing meeting gathered filmmakers from Shanghai Media Group’s Documentary Center, as well as the doctors and nurses involved in the series, to talk about their work and life experience in Wuhan, the epicenter of the COVID-19 outbreak.

The two-hour event reviewed the treatment and surgery of an 80-something patient. The COVID-19 patient was also severely suffering from gangrene on his right leg because of diabetes.

Anesthesiologist Cao Shumei kept feeling the pulse on the patient’s wrist in case of any emergency on the 40-kilometer hospital transfer journey.

Ma Xin, an orthopedic expert on the Shanghai medical team, performed surgery on the elderly man wearing a heavy, multi-layered protective suit, while professor Chen Shu, a respiratory expert, was in charge of the COVID-19 patient’s health conditions throughout the amputation process.

“The muscles on my chest ached a lot as I was breathing hard in the thick suit during surgery,” Ma recalled. “I was sweating so much that even the multi-layer protective suit was all wet.”

The success of the surgery boosted the confidence of the Shanghai medical team and their colleagues in Wuhan.

Many members of the Shanghai medical team are post-90s generation of people. Although they are young, they are very hardworking, brave and dedicated.

“It was a real challenge for us,” said Ma, deputy director of Huashan Hospital. “The surgery was a big success and it was also a medical miracle at that time owing to the joint efforts of so many people.”

Fu Jingjing, a 24-year-old nurse from Huashan Hospital, couldn’t help vomiting after wearing the protective suit for the first time. Fu cried and felt guilty she wasted her protective suit, and failed to lend a hand when her colleagues were busy.

“I didn’t tell my parents that I was heading for Wuhan, instead, I told them I was sent to a small and safe city of Hubei Province to alleviate their worries,” Fu said. “It was not until we were back that they got to know what happened.”

Fan Shiguang, chief director of the series, said that shooting in Wuhan differs a lot from that of the first two seasons of the series. Wearing protective suits made the shooting more difficult and tiring. About 70 percent of the sequences in the first episode were shot with a cellphone.

“Many heartwarming stories in the documentary series demonstrate our country’s respect and cherish for every single life, no matter how old or young,” said Chen Yuren, vice president of Shanghai Media Group.

“What has moved our audience is the power of truth and love.” 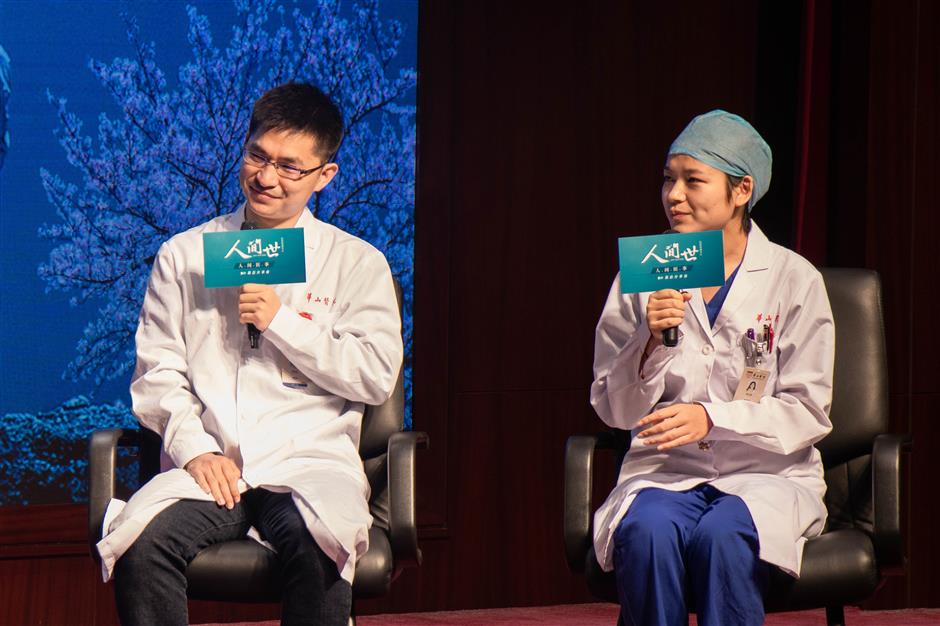 Luo Mengqiang (left) and Cao Shumei, members of the Shanghai medical team to Wuhan, at the sharing meeting with audiences at Huashan Hospital.